Trying to Stay Cool in Terezin

Today may have been the hottest day of the trip. All the Czech Republic is under a heat advisory, with high temperatures reaching into the upper 30s, but combined with high humidity that makes it feel like the low 40s.  I advised everyone to bring lots of water.

Breakfast in the hotel was fine.  Even better was the A/C on the bus to Terezin.  There was WiFi for the first half but then it cut out with no explanation after 30 minutes.  Thankfully, the main museum was air conditioned, so we were able to walk around in comfort.

This is a collage of the art created by children in the ghetto: 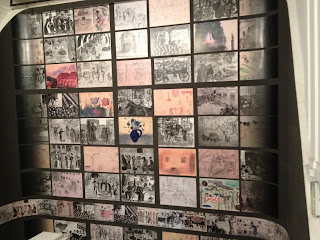 I'm sure that at least one of my students is going to remark on their evaluations that one of the valuable things they learned on this trip was how to secretly photograph items in museums when photographing isn't permitted.

These dolls were created by a girl in the ghetto: 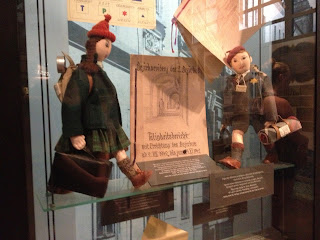 Leo Haas, an artist imprisoned in the ghetto, worked for the ghetto administration while secretly creating art that depicted the actual conditions in the camp.  This is a set of images designed to teach children how to behave by describing prohibited acts:  eating with dirty hands, whistling on the street, and spitting in public. 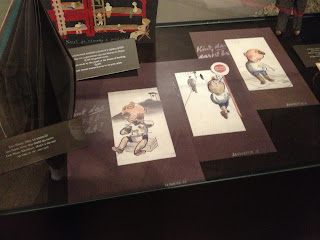 I warned the students that the cafe in the museum would not be "sumptuous."  Here's the "buffet": 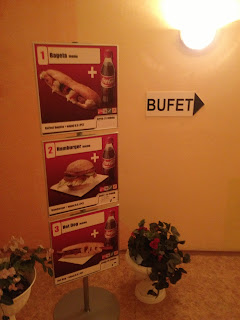 After lunch we went to the Madgeburg Barracks where they have a recreation of how the living conditions in the camp were: 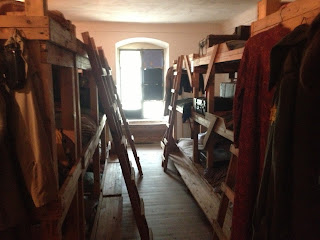 The guards were really observant to prevent anyone from photographing the art created in secret by artists in the camp.  I did manage one shot: 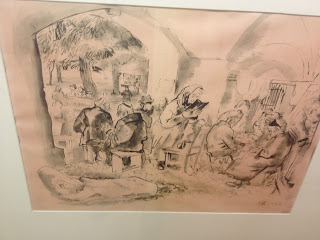 Given how hot it was, I decided to skip the long walk to the mortuary, cemetery, and crematorium.  Instead, we walked the kilometer to the small fortress.  As it happens, we dodged a bullet since it turns out that they were still flooded from last week.

They offer free guides at the small fortress and we had the same one as two years ago.  I compared photos and she's the same. 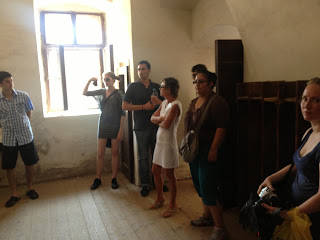 Whole sections of the small fortress remain flooded.  We could also see how far the water rose last week.  Just check out the water line in these cells built to hold Jewish prisoners: 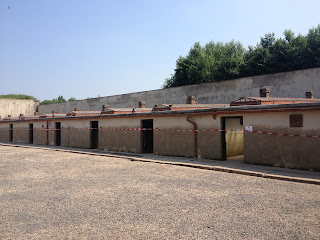 After that, we decided to head back to town.  Getting off the air conditioned bus in the heat of Prague was painful.

I took my laundry to a laundromat, which turned out to be much more expensive than in Berlin.  Even more painful, though, was the heat from the dryers in an unairconditioned waiting area.

They are predicting that tomorrow will be "much cooler." When I said that to the concierge she responded "if there is a rain it will cool off.  Otherwise, again like today."

Here's hoping for the best.

The dolls in the display case were actually made by my great aunt Erna Bonnova. The Museum sent me photos of them. I think the drawings were by the girl that you mentioned. These were very sad times, but I am glad some of the people were able to still be creative. Erna was on the one red Cross train that took widows and single ladies to Switzerland, so eventually she returned to Czechoslovakia.