Majdanek is one of the hard days, not just because of the substance, but also because of the logistics.  I had gone to the train station the night before to buy tickets and ended up waiting a half an hour to get to the ticket clerk who didn't speak English.  I typed out what I wanted on my iPhone screen and held it up to the window.  It worked.

Because I have eight students plus myself, they print out two boarding passes for four students each and then one for me.  The hard part is finding seats together, so I try to get adjacent compartments.   When we got to the station, I search to confirm the platform, and at one point I rushed them back up the stairs only to realize we were on the right platform all along.  Finally, we got on the train.

Of course immediately, the students break out the electronic devices. 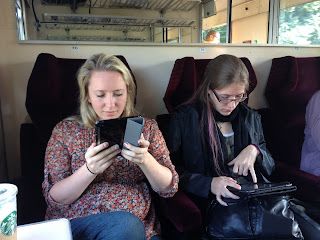 The train filled up and some people ended up in the hallway.  We had a free seat, so one of the students invited a Pole sitting opposite to join us.  He immediately fell asleep. 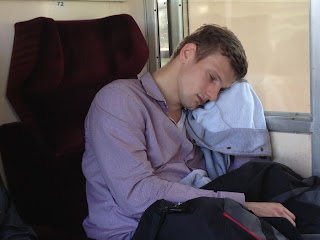 I decided that instead of having lunch in town, to grab something quick at or near the Lublin train station and then visit the old city of Lublin later if we had time.  I didn't want a repeat of how rushed I felt at Mauthausen.

Unfortunately, that was a mistake.  We went to the restaurant closest the train station, but they forgot my meal.  After everyone had been served I called for the bill.  The waiter said they're cooking it now, but I said don't bother.  I ended up getting a waffle with whipped cream and chocolate syrup across the street.  The waffle wasn't even fresh; they had precooked them and they just popped them into the machine to warm them up.  Not happy.

We wasted so much time over lunch, I said let's not worry about when we're getting the train back.  We'll spend as much time at Majdanek as we need.  We caught a bus almost immediately that dropped us off just opposite the camp. 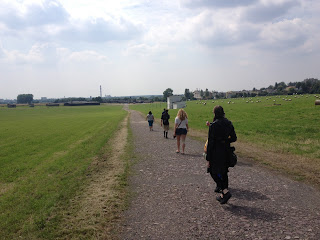 I let the students move at their own pace.  Majdanek began as a POW camp for captured Soviet soldiers, and eventually expanded to include Poles, Jews, and others.  While it was intended to be a very large camp, only a fraction of it was actually built and it remained relatively small.  Although part of the "Aktion Reinhard" extermination camps, the death toll at Majdanek was the smallest:  just 78,000.

Prisoners arriving in the camp underwent selection.  Those who were chosen for slaves were shaved and then forced to enter showers where the water alternated between freezing, then scalding, then freezing again. 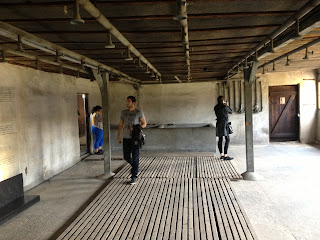 Those selected for death -- the elderly, the weak, and the sick -- were sent to the gas chambers.  At Majdanek they used both carbon monoxide and cyanide gas chambers.  This is the one for cyanide gas, which over time, turned the concrete blue. 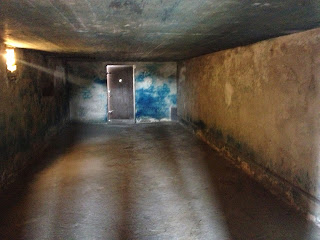 Next to the buildings with the showers and gas chambers were the barracks holding the belongings stolen from those who had be murdered.  These are now used as a museum telling the history of the camp.  This is a display of victims, many of whom passed through the camp on their way to places where they were eventually murdered. 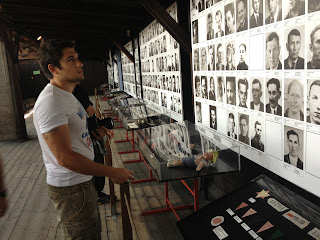 The museum also displays receipts for the hair collected from prisoners which was cleaned and then sent back to Germany to make a felt-like fabric. 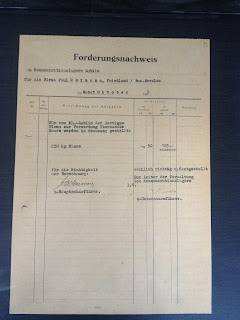 One thing that has always interested me is the art created by prisoners in the camps.  It was a form of resistance, first by keeping their own spirits up, second by helping the prisoners whose portraits were done by raising their spirits, and finally, but creating an alternative records outside of Nazi control.  Here are two such portraits: 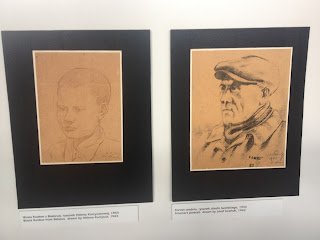 After the main set of exhibits on the camp, they had one of the two barracks holding shoes open to the public (this represents only a fraction of the items held here for shipment to Germany at the time of the camp's liberation in July 1944). They found several hundred thousand pairs of shoes.  This is just one: 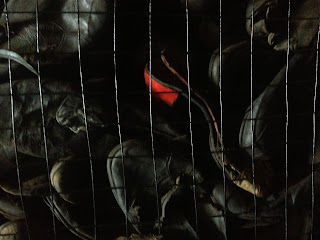 The pathway leads into a section of prisoner barracks that have been restored to show what conditions were like with the camp was being used.  Every time I come here, I'm struck by several things:  how close the camp is to Lublin, and the sound of crows cawing incessantly around the camp.


There were a small group of Turkish tourists who were paralleling our group, so I also explained to them about the barracks.

From here, we headed to the later gas chamber and crematorium.  While the concrete structure and the ovens are original, the wooden frame around them and roof have been reconstructed. 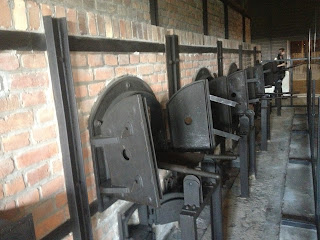 Next to the ovens, the commander of the facility kept a bath tub heated by the ovens, and the ashes of those murdered were used to fertilize the SS garden. 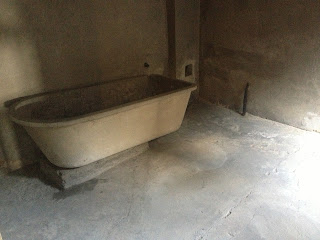 After over two hours in the camp, we returned to the road and to the train station.  After a very complicated process, I got our tickets back to Warsaw, but we had nearly a two-hour wait.  With nothing good to eat nearby, I ordered a "toasty" in the station cafe and tried to surf the internet with the astoundingly weak wifi connection.  By 10:20 pm, we made it back to Warszawa Centralna station.