Chapter XXIV: In Which the Hero Loses His Temper and Screams at a Senior Citizen

I'm not sure how today's entry will affect your opinion of me, but you need to know before hand that the bitch deserved it.

Our train didn't leave until 9:48, so we all had a leisurely breakfast this morning. 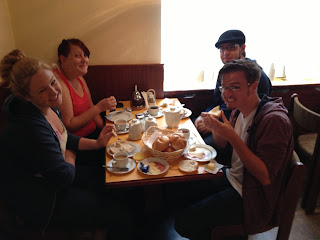 Then, packed and ready, we braved the light drizzle for the Westbahnhof.  I couldn't get all our seats together, so we are in two separate compartments.  Five of us were in the front of the train in wagon 21, four were in the back of the train in wagon 24 (which is also next to the restaurant car and near 1st class).  After we had been on the train for 15 minutes, one of the students from wagon 24 came up to me in wagon 21 to tell me there was a problem with people in their seats.  All she told me was that they were old and wouldn't move and she didn't want to make trouble.  I said that I would make trouble.

Already furious, I stormed back four wagons.  The English couple had already agreed to move but the two Austrian ladies in their late 60s or early 70s refused.  One had a little white dog on her lap.  I told them that I had reserved and paid for these seats.  "Where does it say that?" one of the women officiously asked.  I went and grabbed the seat reservation card from the student who had it and showed it to her.  "Well, where am I supposed to sit?" she replied.  "I can't stand all the way to Györ."  I told her that wasn't my problem and that she had to move.  She announced that they were going to wait for the conductor.

He arrived a few minutes later and I angrily explained the problem.  He asked me to step aside while he dealt with it.

From what I could see, the woman with the dog hadn't brought the appropriate ticket.  She claimed, I think, senior citizen status, but she didn't have the card or something.  She handed some kind of ticket to the conductor and he ripped it in two.  I'm not sure what she's going to have to pay.

Then he came to me and told me that the two students whose seats were occupied by the women could sit in first class for the time being.  The two boys happily went off to continue drinking.  As I passed the two bitches (perhaps three?), I told them I thought their behavior was "not so nice" (I couldn't think of anything harsher in German at the moment).  Then I returned to my wagon where I gave some Mozart Kugels bought to all the students with me.

About 45 minutes later, I walked back to the other students to give them their kugels and see how they were doing.  One of the women had left, but her friend and I exchanged glares and evil looks.

I did, however, have a very pleasant surprise.  Overnight, they repaired the tracks so we did not have to change trains to a bus after all.  We could see the part that had been damaged, where the Danube had flooded over the embankment and damaged the rails.

Eventually we reached Budapest and I gathered all the students together to make sure everyone from each of the three wagons made it.  As we waited, the remaining Austrian woman passed us with her dog.  She paused by us, and as I suspected, the dog attempted to pee on one student's suitcase.  Luckily, the dog really was a bitch and almost none of it got on.  I was furious and I followed the woman to where she was reading some sign.  I went up to her and yelled (in English):  "YOU ARE A GOD DAMNED BITCH!"  She looked quite startled (as were the students, though not unpleasantly) and I walked away.

The whole area around the train station is a vast construction site, so it wasn't easy getting out.  Eventually we checked in to the hotel, which is very nice.  I'm quite pleased with it (I've stayed here before, but not since 2007).  After that, we went back to the station to change money, visit the ATMs, and get some lunch.  The hard part was finding the entrance to the metro.  I walked two blocks trying to find a metro entrance not closed by construction only to find that it was on the other side of the train station.

I bought the 72 hour passes and we got on the metro for downtown Pest.  I took them first to Gerbeaud, but they've remodeled their display counter.  Gone are the wonderful curved glass display cases with the various forms of cakes and pastries; instead, they put in ugly square things showing off chocolates.

We then walked to Gresham's Palace where I asked about pharmacies (one student has been rather congested), and they told me to go to tram stops (we later found one two doors down!)  From there we headed to the Chain Bridge over the Danube. 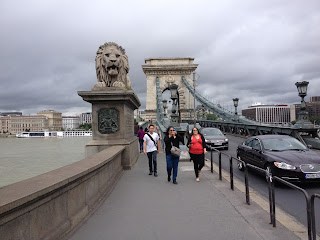 There's a funicular up to the Buda Castle that we took and it gave wonderful views of the Pest side and the Danube. 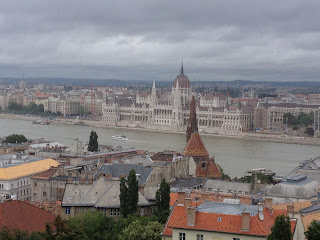 I talked with the students, giving them a brief overview of Hungary's complicity in the Holocaust as a Nazi ally.  From there we headed to Ruszwurm, the oldest sweetshop in Hungary (1827).  They only had two small tables, but we expanded them from 4 seats to 7 (two of the students decided they just wanted to walk around).

I ordered the cream cake, which is two very thin layers of flaky dough filled with a large mass of intensely vanilla-flavored whipped cream.  One student got the Dobostorte, with its layers of hazelnut meringue cake sandwiched between chocolate butter cream with a top piece covered in caramel.  Another student got the Ruszwurm cake (mostly chocolate), though she felt it was rather dry. 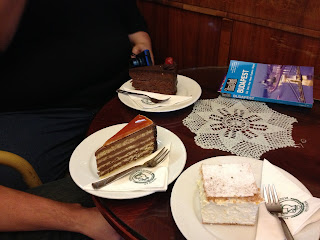 It's a short walk from Ruszwurm to the Fisherman's Bastion, a highly romanticized outcropping that really was Disney before Disney.  There are wonderful views of the Danube, and I took a nice shot of all the students on the trip. 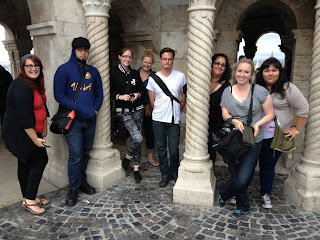 We went back down the funicular, and then I took them on a tour of Andrassy ut, Pest's main commercial street.  Our first stop:  the Hungarian State Opera. 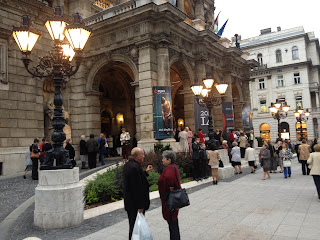 Tomorrow night they're premiering Jean-Philippe Rameau's Hippolyte et Aricie.  I may try to get tickets tomorrow.

For dinner, we went to Bagolyvar, a rather inexpensive restaurant owned by Gundel and sharing a kitchen.  I started off with the sour cherry soup. 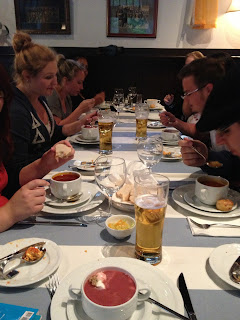 For the main course, I went with the chicken paprikash and home-made noodles.  It was quite yummy and the paprika wasn't overwhelming. 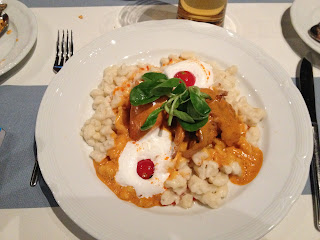 The dessert that came with the menu was the Gundel crepe, which is filled with ground walnuts and covered in dark chocolate sauce, but I've never been the biggest fan.  I think it's the walnuts; they're my least favorite of the nut-based desserts, as I prefer either almond or hazelnut.

Tomorrow will be a full day of Holocaust and prejudice.  I'm going to try to buy our train tickets to Poland in the morning.
Posted by J.B. at 1:53 PM