Second-Longest Day of the Trip

Yesterday was the first full day of the class and, I realized later, the second-longest day of the trip.

Most of the students woke up too early due to jet lag and were waiting for me to come down to help them get breakfast.  There were a pair of still drunk Englishmen having breakfast at the table next to us, which led to some odd, if interesting conversations. 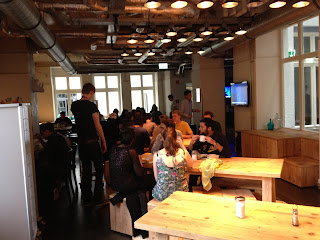 There was a big group of high school students staying (there are a lot of student groups staying here), but after a while they cleared out leaving just us and the drunk Englishmen.

Here are three of the eight students at breakfast: 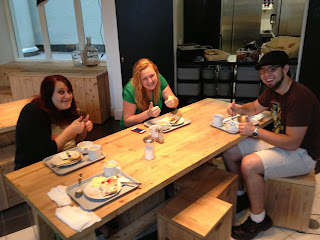 At 9:30 we left for the Topography of Terror.  This site is built on the location of the SS and Gestapo headquarters and is dedicated to covering their role in Hitler's totalitarian governance and crimes.  Here's the memorial in the building. 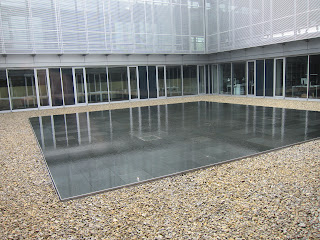 I snapped a few shots inside of students and of the exhibits. Here are four of the students: 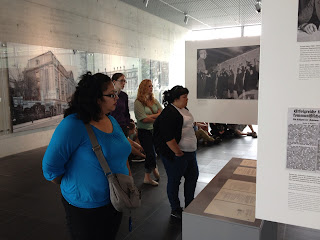 These are from an exhibit on Nazi propaganda: 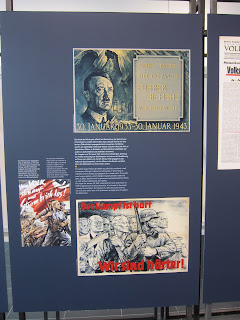 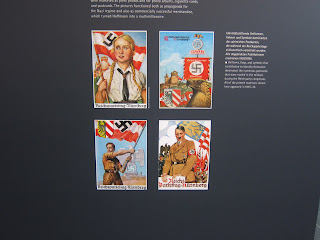 Afterwards, we went out to see the fragment of the Berlin wall that ran just to the north of the site.  Here are all the students on the trip: 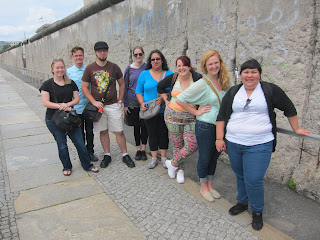 Afterwards, I took them to the Schliesches Tor stop where there were lots of options for lunch.  Irene and I went to the hamburger place and had a nice conversation with two students (from Switzerland and the U.S.): 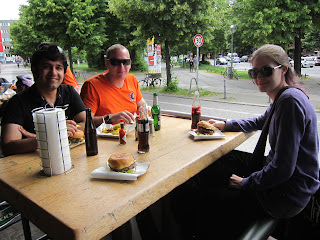 While the rest of the students had kebaps across the street.

We went back to the hostel for a short break and then started a walking tour of downtown Mitte.  I had printed out and laminated a photograph installation by the artist Shimon Attie.  In 1991, he went to the newly opened east Berlin and projected slide images from the 1920s onto the places where they were photographed and then documented the installation.  I took the students on a tour of those places.

Along the way we stopped at this very understated memorial in Koppenplatz, called The Deserted Room, and we talked about the juxtaposition of violence (in the memorial with the knocked over chair) and the beauty of the surrounding park. 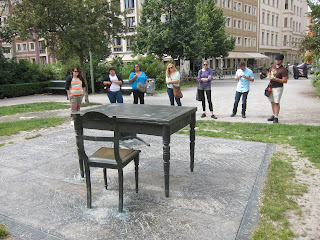 Eventually, we made our way to Alexanderplatz for a coffee break, and then one of my graduate students taught the class about the Rosenstraße protests, where the Aryan wives of Jewish prisoners demonstrated outside the building where they were building held and succeeded in getting them released.

Afterwards we visited Bebelplatz, where they burned the books in 1933, and then the Brandenburger Tor.  On the eastern edge of the Tiergarten there are three memorials.  Instead of having one general memorial to Holocaust victims, there are specific memorials to individual victim groups:  the Memorial to the Murdered Jews of Europe; the Memorial to Homosexual Victims of the Holocaust; and the newest memorial, to Roma and Sinti Murdered in the Holocaust. 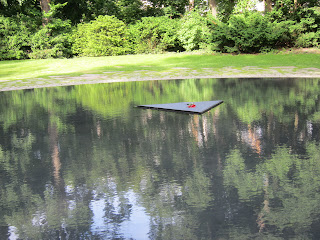 The memorial has a large, reflecting pool with a triangle in the middle.  The triangle has a single flower, but on closer look, it appears to be pinned to the triangle. 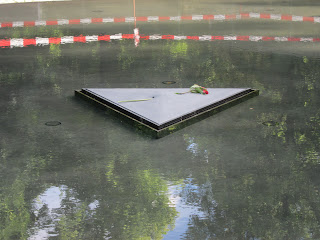 Surrounding the pool are the words a short poem by a Roma poet.  Here is the text posted on the wall outside the memorial: 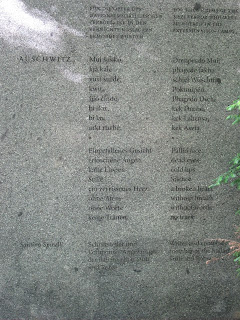 After visiting the other memorials, we walked about 15 minutes to Fassbender &  Rausch chocolaterie, but by the time we got there (7:30 pm), it was only a half hour from closing, so we couldn't eat in the cafe, though we could buy some chocolate. 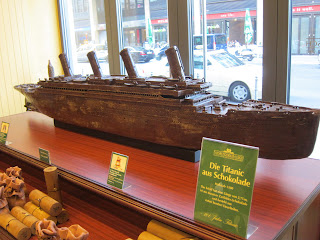 I only saw the Titanic; I didn't buy it.

It was getting kind of late, so I took the students up to Prenzlauer Berg for the punk-anarchistic Italian pizzeria.  They had big tables out front, so we easily found a place to eat. 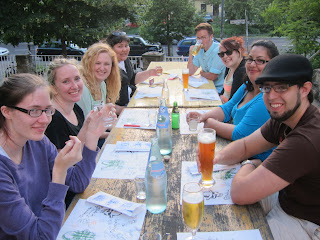 The pizzas are very Italian:  thin, crispy, and baked in a wood-fired stone oven. 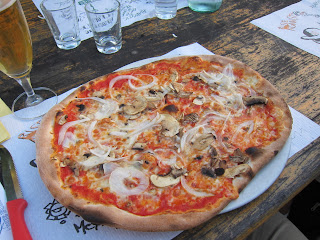 Most of the dinners ate their pizza with fork and knife, but that just seemed too odd to me.  Everyone loved their pizzas. 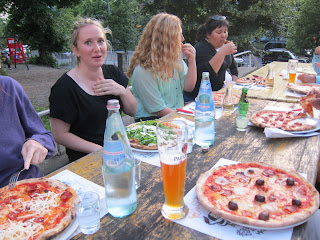 By the time we finished it was nearly 10 pm and the sun was just setting. 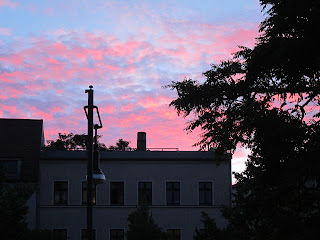 We headed back to the hostel, where thank God, the student whose luggage was misplaced had arrived.  I went upstairs and collapsed into bed and fell asleep.