A Cold and Rainy Day in Berlin

I don't think taking over night flights is getting any easier.  I did manage to sleep for nearly 4 hours; I think the only time I slept longer was on the flight home from Israel in 2011, when we were bumped up to business class and my seat reclined flat.  No such luck this time, as I was pretty much wedged into a corner.  Thank God for Ambien.  Woke up just before the breakfast service.

Berlin airport puts most U.S. airports to shame.  Not because it's so large or fancy; only because it's well organized.  I cleared passport control and customs within 15 minutes of getting off the plane.  The exit ramp from the plane fed right into the passport control queue, which was set up just to handle a few gates.  I was through in no time at all.

When I changed planes at Newark, I walked by the security checkpoint and they had big fans set up since the AC wasn't working well.  I've seen the same fans at Kennedy when I went through passport control there.  It's so embarrassing!  We're the wealthiest, most powerful nation on earth, but we can't properly cool our airports?  This is how visitors to the U.S. see us.  We should hang our heads in shame.

Bought a 7 day metro pass and took the bus to Alexanderplatz.  I had read in the paper last week that this may be the summer without a summer in western Europe, as it's been cold and rainy (though not yet summer).  Eastern Europe, on the other hand, is expected to be warmer than usual, so it made it difficult to pack.  Well, the weather in Berlin is cold (12 Celcius), damp, and windy.  Thankfully, today was probably the worst; the weather is expected to improve over the next few days.

I got to the pension around 10 am and put my stuff in the room.  They still needed to clean it for me, so I decided to just go walking.  It was cold and slightly drizzly, so I just took my windbreaker with the hood.  I figured that after sitting on a plane for 13 hours, my legs would be happy to get out and move.  I was hoping to recalibrate my body clock by being in sunlight, but there wasn't much chance of that happening.  I also am hoping that the exercise I get from hours of walking will make up for not going to the gym.

My path led me all over downtown Berlin, sometimes on a tram, but mostly by foot.  I ran across a small little Holocaust monument at the Friedrichstraße station:  it had two groups of children.  On one side were a boy and girl leaving on a Kindertransport with their tags; on the other side were four children wearing Jewish stars being deported to their deaths.  The title read "trains to life; trains to death."

Unter den Linden is mostly a construction site these days, so I walked to the Tiergarten to check out the new memorial to Roma and Sinti.  There's a translucent wall separating it from the rest of the park on which is written a chronology of the persecution in German and English.  As you enter the memorial area you can suddenly hear plaintive music of one violin (it's almost inaudible outside the monument.  The space is sunken, with a low pool in the center.  Surrounding the pool, submerged under water, is a poem in English and German about the Roma victims.  On the broken stones that ring the space around the fountain are the names of camps and ghettos where Roma and Sinti were imprisoned and murdered.  I wish I could have spent more time there, but the drizzle had now become a steady rain and my windbreaker was starting to get soaked.

I walked across to the Reichstag, but it turns out you need to reserve a time to visit.  I just grabbed any bus I could find to get out of the wet, and made my way eventually to the Hauptbahnhof to buy a newspaper and a simple lunch.

The room wasn't going to be ready until 2, so I stopped off near the pension for a Milchkaffee and, for lack of a better term, a piece of rugelach (both were very good).  I went back to the room around 1:30 and thankfully it was ready.  I set up my computer and made sure everything worked, and then took a much-needed nap.

I'm trying to move my body as quickly as possible to the new time zone.  I didn't want to sleep too much or I won't sleep tonight.  After about an hour, I got up, changed by shirt, took an umbrella, and went for another walk.  I wanted to check out a new installation I saw by Museuminsel called "Destroyed Diversity," about all the artists and intellectuals who were driven out of Berlin by the Nazis.  I couldn't help be reminded of the famous novel from the early 1920s, Die Stadt ohne Juden (The City Without Jews), what was then a piece of speculative fiction imagining what would happen to Vienna if all the Jews were expelled.

Even with the umbrella, though, I was getting drenched.  The rain wasn't that hard, but the wind played havoc with the umbrella.  I think I'm going to have to buy a new portable one tomorrow.  Bebelplatz is still a construction site, but thankfully, I was able to see the memorial to the book burnings (in between struggling some more with the umbrella).  I picked up the schedule for the Komische Oper and then decided to get an early dinner.

I decided to try this place, one metro stop away: 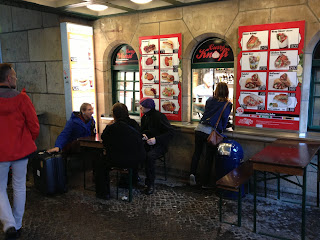 It's a hole in the wall underneath the U2 line at Eberswalder Str.  I went for the classic, currywurst and a bottle of beer.  I forgot that the standard size for beer is a pint (technically, half a liter): 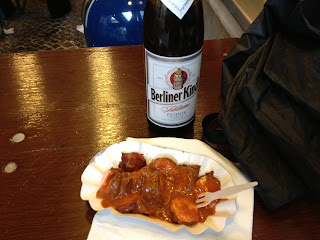 There were some buskers out performing in the cold, trying to make a little money.  The guy was playing something experimental on his guitar while his girlfriend (?) performed rather contemporary-style modern dance moves. 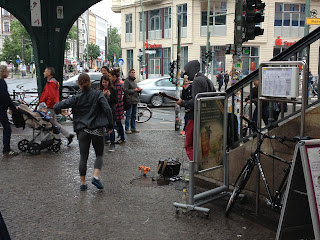 I think that's it for today.  Tomorrow I head off to the Humboldt Library to see if I can get them to digitize a trial transcript from 1921 for me.

Thanks for posting, Jeff. Love reading about your travels! Have a great time on your trip!