Arriving in Warsaw (Updated With Photos)

One of the students' compartments on the train to Warsaw: 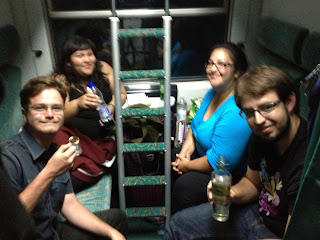 I took a sleeping pill in order to sleep on the train and it worked.  I managed over six hours despite the noise, the motion, the heat from the electrical outlet on the wall near my pillow that came on and off during the night, etc.  Since I was right next to the student compartments, I was easily able to give them plenty of notice of our arrival in Warszawa Centralna station.  No one in their socks on the platform this time.  Still a little confusion on my part on arrival, since I couldn't buy metro passes with my credit card and that meant I needed to get a lot of cash quick.  It took a while to find a bank with an ATM.

Eventually, though, I got the money, the tickets, and found the tram to the hotel.  Our rooms were ready, so I checked everyone in and we all got breakfast and showered (or the other way around).  Around 10 am, we headed off on the tour.

We started with my searching, successfully (after a while) for the two remaining fragments of the Warsaw Ghetto wall. 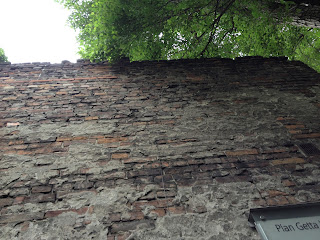 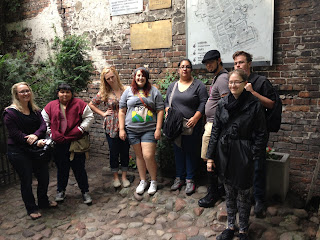 Then we walked to ul. Prozna where there is an old tenement building from the ghetto that is slowly falling to pieces.  Two years ago there were two buildings here; the one on the right was torn down. 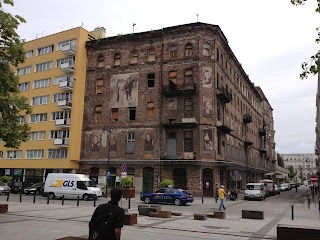 After that it was the Nozyk synagogue 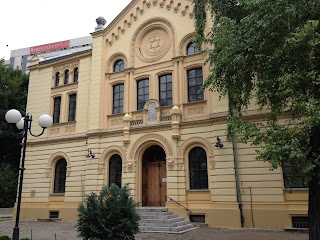 And then the Jewish Historical Institute.  Their main exhibit on the Warsaw Ghetto, including one of the milk cannisters used to hide the archives, is now at the Museum of the History of Polish Jews, so we could only see the film and an exhibit on how Polish artists have confronted the Holocaust.

This one is called "There's No Such Thing as an Innocent Eye" and consists of photographs of former synagogues being used for other purposes: 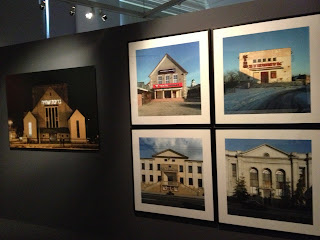 It was after 12, so I took the students through the Old City to a very traditional "milk bar" (kind of communist-era diner) near the barbican.  I had the barley soup and the blueberry perogie in sour cream. 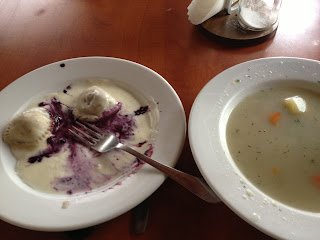 The way it works is you order and pay at the register and then hand your slip to a woman behind this window, who then brings you your food: 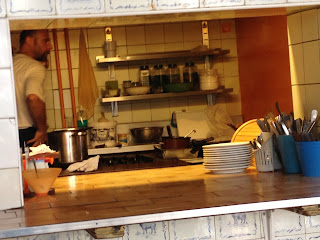 We walked from there to the Umshlagplatz, passing some interesting wall art that seemed to be devoted to the Warsaw 'Rising of 1944. 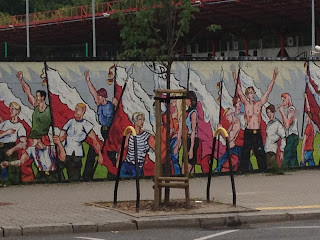 By the hotel I used last time we saw a memorial to the many Poles deported to prison camps by the Soviets between 1939 and 1955. 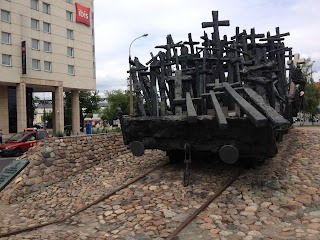 This area, which includes the northern part of the ghetto, was where the command bunkers of the Jewish underground were located, so there are many memorials here.  In addition the Museum to the History of Polish Jews has finally, though only partially opened. 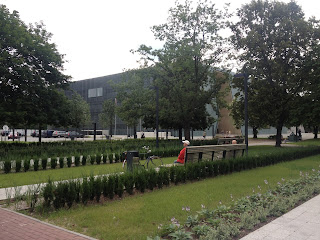 The permanent exhibit isn't open yet.  All you can see so far is the roof of the reconstructed wooden synagogue, but they have temporary exhibit on Jewish home movies of the 1930s with background music by the Klezmatics. 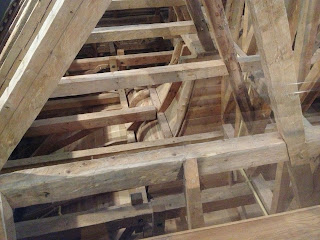 The whole area around the museum is ringed with monuments, though I'm not sure this guy talking on his cell phone really matches the heroism of the Polish Home Army liaison officer, Jan Karski, who smuggled himself into the Warsaw Ghetto and later met with FDR. 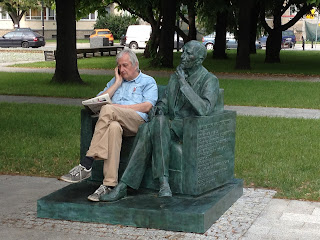 After all that walking we really needed a coffee break, so I found a wonderful little bookstore/coffeeshop a block away called "Paradox."  It's dedicated to all things science fiction and fantasy, and sure enough, "Hellboy" was on the front door: 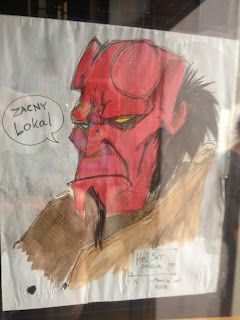 And "Game of Thrones" over the bar: 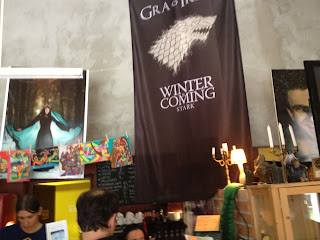 It turns out that several students are manga fans, particularly of one my niece's favorite series:  Black Butler, and they love the character of Sebastian.  Another loves the series Full Metal Alchemist.

I had hoped to go to the Museum of the Warsaw 'Rising, but there was no way to tour it sufficiently before it closed at 6 pm.  Besides, I still hoped to get the students to Beit Warszawa for Friday night prayers and dinner, and one student whose ATM card was eaten by a machine, hoped to get it back.

Given the logistical hurdles, there was no way the student who had to go to the bank could join us for dinner, so I took the six students who wanted to go (one wanted to rest up) and we got on the bus for the ride down to the Wilanow neighborhood.  We got there in time and the students all sat in the back.  One student who works with Orthodox Jews told me later that she loved to be able to participate by sitting with everyone.  The sermon was in Polish, but they provided an English-language translation.  Almost all the prayers were in Hebrew, and only one or two was said in Polish (not that the students could understand Hebrew any better, but it made it much easier for me).

Beit Warszawa is a liberal synagogue, so there's no mechitzah and the rabbi uses musical instruments (a guitar).  A fair number of Debbie Friedman melodies and I was struck by the use of Israeli Hebrew pronunciation, rather than the traditional Polish accents.  I asked the rabbi afterwards, and he said that they follow the Reform movement's approach of using Israeli pronunciation.  I suggested that with the rupture of the Holocaust and then communism, perhaps the accents they were using derived from the Jews who came back to Poland to teach people.  If the Orthodox use an Ashkenazi accent, perhaps it's because their teachers from the U.S. had such an accent.

I chatted with an American library science professor from Oregon State University, so by the time I got into the dinner room, most of my students were seated at their own table.  I ordered as many of them as I could to get up and sit at a table with Polish Jews who also spoke English.  I wanted them to learn and interact, not just sit with each other.  Three moved to the other table and I could hear them sharing stories and hearing about Jewish life in Europe.  I stayed with the three students who remained and kept them company.  Later, I tried to get them to join the three other students by pulling their chairs around and most did. 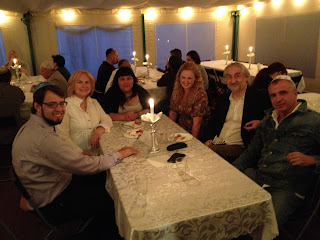 The students all seemed to enjoy the evening.