Every year, the winter rains (if they come) spark new growth in my yard. This spring, a lot of new stuff is blooming.

First, there is the San Clemente Island Bush Mallow (Malacothamnus clementinus).  I've planted a lot of different shrubs along the west wall of the house, but most died after a year.  I planted this a year and a half ago and it's thriving and now in bloom. 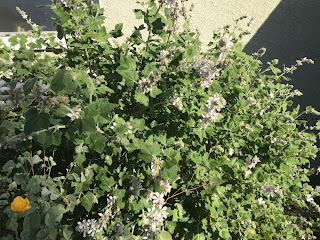 It sounds out under ground runners, so it will slowly expand to fill in the whole west side of the house.  Meanwhile, the Indian mallow (Abutilon palmeri) that I grew from seed is doing nicely on the left, as is the Canyon Prince Wild Rye Grass (Leymus condensatus) in the center foreground, and the California Wishbone Bush (Mirabilis) on the right side. 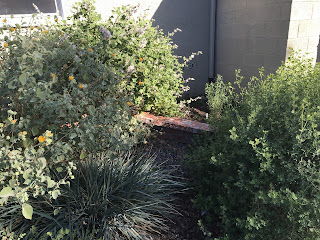 California poppies (Eschscholzia californica) bloom year round, but have their most exuberant showing in the spring.  Other California wildflowers, like the blue Globe Gilias (Gilia capitata) only bloom in the spring for about a month. Most California poppies are orange, but there are some that are in shades of yellow.  Over time, however, the gene for orange will dominate. 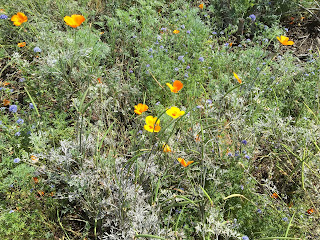 Most sages have blue flowers, but Hummingbird Sage (Salvia spathacea) has deep red flowers and a wonderful smell.    Like the Bush mallow, it spreads through underground rhizomes, so even though I originally planted this in the planter five and a half years ago, it spread to the area next to the sidewalk. 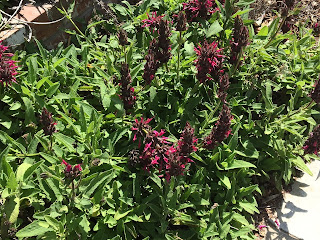 This Cleveland Sage (Salvia clevelandii) is exuberantly blooming, and I do have to trim it back to keep from overrunning the sidewalk.  It's very drought tolerant.  In the summer, I usually just water it with sink water I collect after washing pots or pans. 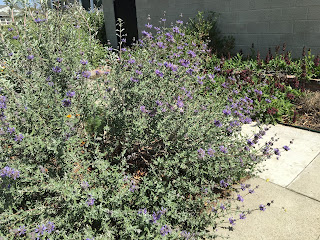 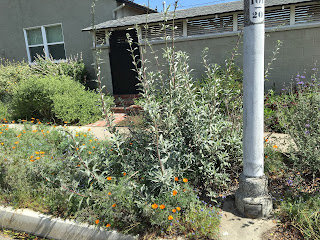 My favorite smelling plant is the Pitcher Sage (Lepechinia fragrans).  It's not actually a part of the sage family.  This was one of the first California native plants I put in my yard, but its parent plant died this fall.  I was going to plant a new one, but then I saw that only the main trunk had died but there were a few side plants still alive.  I let them be and now they've put out new growth and new racemes of flowers. 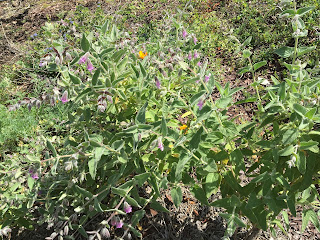 I really love California Mountain Lilac (Ceanothus); unfortunately, it doesn't like my yard very much.  The mid-sized shrub versions keep dying, but these low-lying ones are doing ok.  The bloom period only last about a month, but I've got 4-5 of them blooming in the front yard.  The lighter green plant in front of it is a Red Flowering Buckwheat (Eriogonum grande) that should bloom in a month or two. 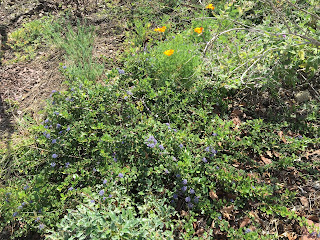 When I first started landscaping, I put in a whole bunch of Coral Bells (Heuchera) to border the part of the yard closest to the house.  Unfortunately, most succumbed to the drought, but this one survived and is now blooming. 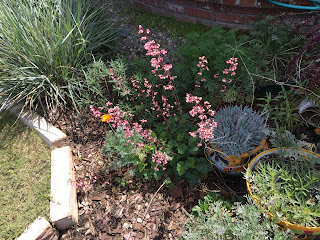 This is the second batch of Coral Bells to survive.  They bloom for about two months (if I dead head them). 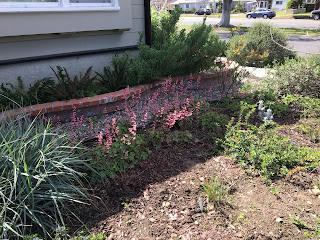 The monkeyflowers (Mimulus) in the containers are starting to bloom (that's a Mountain Lilac blooming behind them). 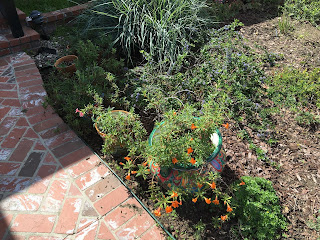 I've wanted to grow Saffron Buckwheat (Eriogonum crocatum) but while I've had very good luck with other types of California Buckwheat, I've had less luck with this variety (though it's from the Santa Monica Mountains).  This one, however, seems to be doing ok and is about to bloom. 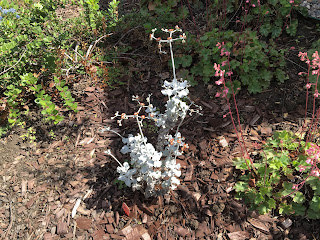 I bought this house six years ago, and I think the west side has been the most successful in terms of landscaping. 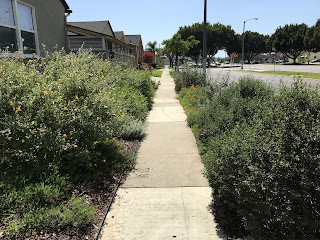