I just got home from Die Zauberflöte and its already so late; I'm just going to put a bare bones post tonight and then fill in the details in the morning.

Started off the day with a leisurely breakfast followed by a quick visit to the Staatsbibliothek.  I went through the photographs I took of the trial transcripts and, while it didn't miss any, a few were blurry (one very blurry).  I made a noted of the pages and then rephotographed them.

As usual, the main reading room was still and quiet, with people noiselessly working at the long desks.  I took a moment to sneak a final shot of part of the room: 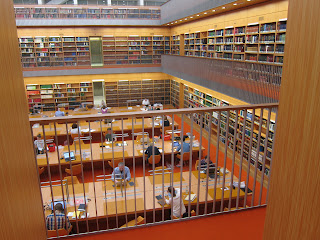 Since I had some free time I went to the Neue National Galerie.  They had an absolutely fascinating exhibit on Cold War art from 1945 to 1968, contrasting works by western and eastern artists.  I was soon quickly able to tell where the artist was working based on their styles.

Works like this 1945 piece by Heinrich Emmsen, who found his figurative work out of favor in the west, ended up in East Germany. 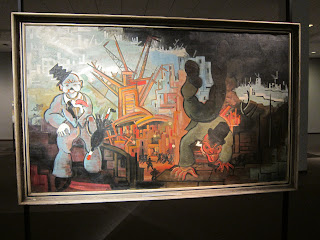 While artists working in the west tended towards more abstract approaches (these works below were all done in the years immediately after the war): 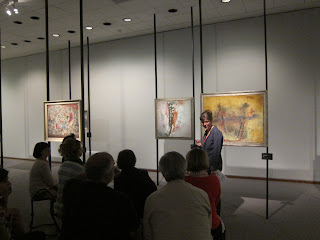 One of the things that struck me about this exhibit was my general antipathy towards western post-war abstraction.  Sure, there were some nice works like this: 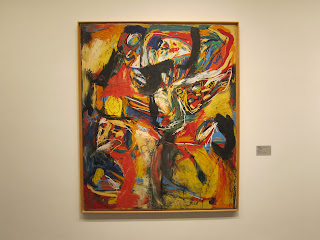 But my eye was generally drawn to more figurative works done in the communist world, like this: 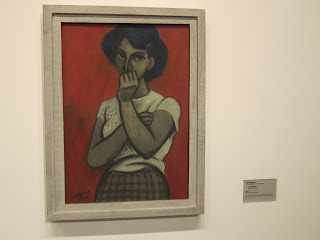 Only when I reached the section on pop art in the 1960s, did I find western works that particularly appealed to me, like this West German satire of both eastern "Communist Realism" and western consumerism with: 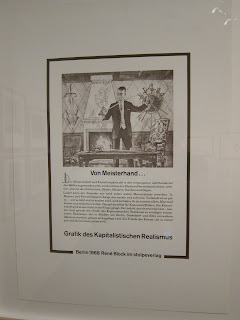 While it's safe to say I'm not a fan of post-war art, this exhibit, more than any other I can remember visiting, helped gain a greater understanding of the post-war artistic movements.  I think I know now why I don't like it.

After a quick lunch I headed to the Balz Archiv and caught the private elevator to the apartment where they are being kept.  Herr Bruno Balz was a major German pop song writer and composer, and he was the screen writer (mostly uncredited) for over a 100 films, with his music appearing in many more, including, most recently, Tarantino's Inglourious Basterds.  He passed away in 1988, and for over 10 years his papers were closed off and then misplaced.  Last year his widower, the artist Jürgen Draeger, established the archives in his new atelier on Oranienburgerstraße, across from Museuminsel.

Here's a photo of the archivist, Dominic Ortelt (on the left) and Jürgen Draeger (on the right): 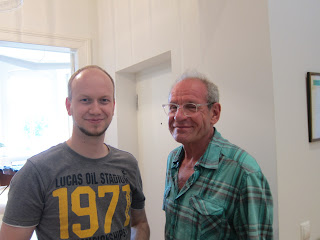 They asked if they could take my picture and I said sure as long as they provided me a copy.  I also had them take one with my camera.  I'm standing here with a photo of Herr Balz behind me and I'm resting against a rather beautiful and elaborate liquor cabinet given him by the Swedish singer Zarah Leander. 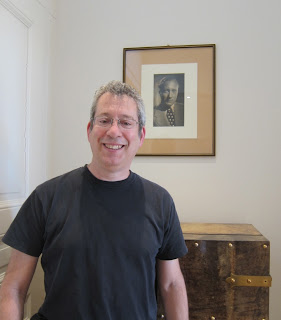 The archive is not a public archive.  They are still going through the papers and material, and interviewing Herr Draeger, and then putting up what they can on their website.  Since Herr Balz was arrested twice by the Nazis for violations of Paragraph 175, and then again by the West German police in the 1960s (West Germany's anti-gay law was only repealed in 1994), he almost never addressed his persecution in public interviews or writing.

I had a long, 3-hour conversation with the archivist.  Their material isn't set up in such a way that I could just start looking through it.  Instead, what I'm going to do is send them requests and questions and they will email me back photocopies of the documents and answers; and in that way, I will write my article (though probably not starting it until the fall, after I get this book proposal on the 1920s' murder trials done).

Trying to speak German for three hours using film and legal vocabulary I didn't know was exhausting.  I could hear how bad my pronunciation was and how many mistakes I was making.  From time to time, we consulted google translate in order to figure out what such or such a German word meant in English.

I didn't have a lot of time for dinner between my visit to the archives and the start of the show, so I tried a fish place around the corner, ordering their fish & chips.  I'm glad I got the small portion: 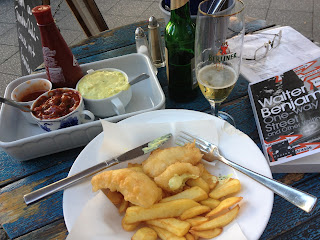 Finally, I headed to the Komische Oper this evening for a performance of one my favorite operas, Die Zauberflöte (The Magic Flute).  I managed to buy the last ticket available, but it had a partially obstructed view of the stage.  Here's the view from where I sat: 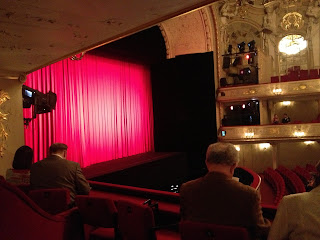 The opera was staged in the manner of a silent film from 1920s Weimar-era Germany.  All spoken dialogue was reduced to titles appearing on the screen, with only the lyrics sung aloud.  The costumes all evoked images of the 1920s, and film projections highlighted the conceit.  The performers wore white stage makeup to look more black and white, for example.  It worked quite well and they could achieve some funny moments.  The Queen of the Night became a giant spider.  The performer stood on a small ledge above the stage and sang, while around her were projected a spider's body with eight legs, each of which threatened to impale poor Tamino if he failed to do her bidding.

The effect was to make the opera more accessible to children.  After all, the principle theme is moral and intellectual enlightenment in the temple of Isis and Osiris; not something that most children find appealing.  By turning it more cartoonish, it gave them something to hook on to as the plot went over their heads.  And there were a lot of children there, dozens of them.  Usually, one sees none.  At the Pause, it seemed that they were all having a good time watching a nearly three-hour long opera. 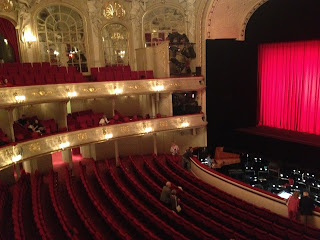 My only problem with the performance was my seat.  In this shot, taken at the Pause, my seat is not quite visible.  If you look in the first balcony level you will see a woman in a white jacket.  The pillar to the right of her (from our perspective) marks the partition between Loge 6 (where she is sitting) and Loge 7 where I was sitting.  I was in the third row back and you can just make out the chair of the man who was sitting to my left.  The bottom line:  when anything happened stage right I couldn't see it.  Still, I very much enjoyed the performance.