A Free Day in Vienna

From the beginning, I planned today as a free day, our first “mental health day” of the trip.  The idea is to give the students a breather after particularly difficult experiences.  We’ve been studying the Holocaust and visiting places of perpetration and places of commemoration pretty much non-stop since they arrived on June 15th.  Nine days in (out of twenty three) seemed a good place for our first break.  Also, yesterday was our visit to Mauthausen, which was hard both physically and emotionally.

Last night, the heat wave finally broke with a massive storm.  At 1:00 am, the windows rattled and the rain poured down.  I decided to close the windows as the sound of the rain was nearly deafening. We also enjoyed a massive drop in temperatures.  As a result, I managed to sleep until 7.

After breakfast, we all went our separate ways.  Some students went to the famous Riesenrad in the Prater Park (immortalized in Orson Welles’ The Third Man), while others went to the Zoo.  I took three students and headed up to the Belvedere Palace. 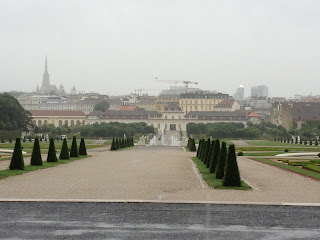 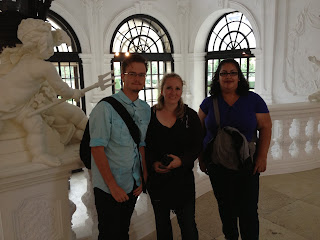 Built by Eugene of Savoy in the 17th century, the upper and lower Belvederes now house a significant collection of Viennese art.  We made our way through stiff winds and pouring rain to the upper Belvedere first.  This was definitely a day for staying indoors.

Like most museums, the Belvedere doesn’t like you taking pictures, but this seems to just to make it more of a challenge.  One of the students has a very nice professional camera, but it’s rather large, and so as she walks, the guards in each room basically followed her suspiciously (and deservedly).  Her camera makes a distinct click, so it really calls attention to what she’s doing.  I told her she needs to buy a silencer for it.  When my cell phone is on mute, it doesn’t make a sound at all.  The two of us competed for who could take the most photos without getting caught.

I mostly took photos of the paintings I particularly liked or found particularly interesting.  Of course, I was limited by the placement of guards in the room.

Let’s start off with this Biedermeyer-era photo of a family in mourning for the loss of their mother and his wife. 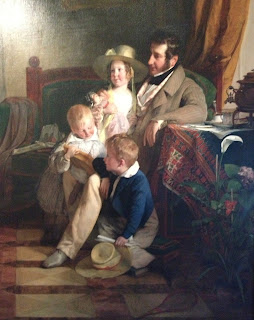 I also found this depiction of a British naval engagement to be almost comical. 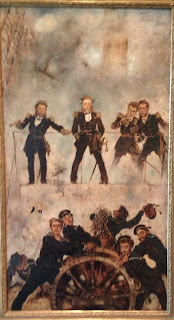 This painting is entitled “Caesar at the Rubicon.”  Presumably the question is only will he cross it to eat the sausages? 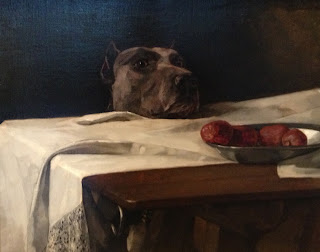 The order of the exhibition seemed a little confused, so at times we would go from 19th century academy art to Secession-era landscape painting like this: 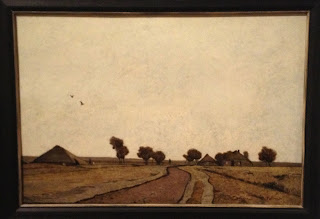 and then back to baroque.

My favorite stuff is on the ground floor and includes Klimt: 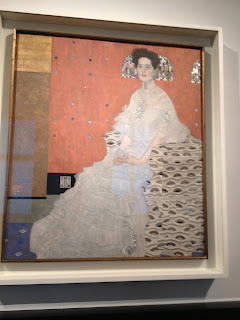 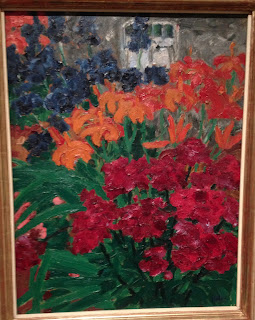 and this really amazing self-portrait by Joseph Floch: 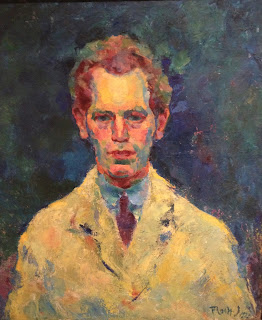 I was also pleased they had a nice collection of Czech cubist and radical paintings to make up a little for the closed museum we tried to visit in Prague.

After lunch we headed down to the lower Belvedere where they had two special exhibits.  The first was an amazing collection of Austrian symbolist works, which is a movement that emerged in the latter half of the 19th century.  Here’s how the museum describes it:

As early as the 1870s, Symbolism started to evolve from the spirit of décadence, which discovered for itself the cryptic aestheticism of decay and of the mystical and unfathomable. The Symbolist movement superseded the official style of Historicist painting, shifting its focus to the subjective perspective of psychological processes, which found expression in a suggestive language of colour and form. Its abandonment of banal reality led some artists to create idylls, while others invented cosmic visions. This new aestheticism, propagated by such artists as Max Klinger, Franz von Stuck, Fernand Khnopff, and Jan Toorop, was transmitted in Austria and Central Europe first and foremost via the Vienna Secession. In Austria, Rudolf Jettmar, Alfred Kubin, and Karl Mediz turned out to be among the most consistent exponents of Symbolism. Yet Symbolist ideas also played an important role for leading personalities of the avant-garde, including Gustav Klimt, Egon Schiele, and Koloman Moser.

Some of the paintings, like The Evil Mothers by Giovanni Sagantini, were fascinating, though with two guards to a room, it was almost impossible to sneak a shot.  The only one got was of the image used in the advertising for the exhibition:  the Red Angel 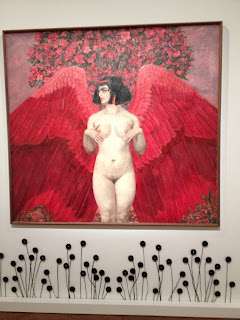 I will admit to one tiny moment of silliness.  There was one painting that depicted a Frankenstein’s monster-like creature, with yellowish eyes, and hands red with blood, lumbering through a snowy scene.  I turned to one student and asked “wouldn’t that go well in a child’s bedroom?”

The exhibition concluded with a discussion of the Symbolist love of Wagner and Nietzsche’s critique of both.

After that we headed to see the special exhibit of the work of Friedensreich Hundertwasser and his time in Japan in the 1950s.  The exhibit explored the origins of his rejection of straight lines and social conformity.  It was quite interesting, but with so many guards (what is it, the Austrian full employment program?), there was no way to snap even a single shot.

We then returned to the pension, where I ran several errands.  The landlady asked me to pay in cash so that required several bank visits to withdraw the necessary amount.  I paid the bill and then went to the station to see about our train tickets to Budapest.  Part of the rail line was damaged in the flood so we have to change to a bus to get around it and then transfer to a regional train line.  I could have taken a bus the whole way, but as I don’t know where to catch it or where in Budapest it lets out I decided not to.  Besides, the regional train will let us off just a few blocks from our hotel.

The clerk at the train station also thought that the damaged track would probably not affect our overnight train to Warsaw, but I will check that out tomorrow night after we settle in.

For dinner, I took those students interested to the city center.  I wanted to eat dinner at Café Hawelka, but they don’t have savory food.  Instead, we went next door to the Reinthaler Beisl, where I had some beef goulash and potatoes and sparkling apple juice. 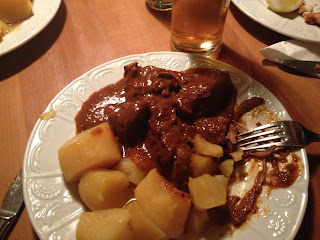 Then we went back to Café Hawelka for dessert:  Buchteln and coffee or hot chocolate.

Buchteln are made out of a yeasty bread dough filled with prune lekvar, allowed to rise, and then baked.  They are delicious, particularly fresh out of the oven. 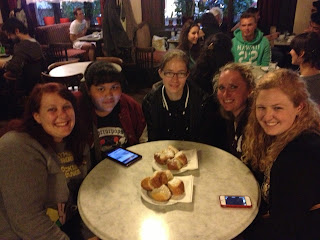 Afterwards, we returned to the hotel.  I made an accounting of my expenses here in Vienna and now need to start to pack up.