This is the fifth time I’ve been to Prague.  Most of the time, Prague has been quite lovely; the city the tourist guides all promise you.  But the first time, and this time, Prague has displayed a different face, an angry face, a face of fury and bile.  When Prague is cool and dry it’s a remarkable place, but when it’s hot and humid, the way it was our first two days here, it can be unbearable.  While the subways are air conditioned, almost nothing else is.  Sleeping, sitting, eating, these all become deeply uncomfortable activities.

Thankfully, the heat wave broke last night.  It stormed and rained (and I slept through all of it) and when I awoke (still too early) it was suddenly pleasant outside.

Today we went to Lidice, the town annihilated on Hitler’s orders to punish the Czechs for the assassination of Reinhard Heydrich (who was also overseeing the Holocaust).  All the men in the town were shot, all the women sent to concentration camp, and most of the children were sent first to Lodz ghetto and then to the Chlemno death camp.

My graduate student again asked to lead a discussion of the town and I heartedly agreed.  As usual, she did a terrific job. 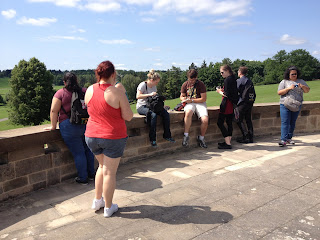 Inside, we toured the museum dedicated to the destruction of the town, though most of the emphasis were on the men and children who were killed, and less on the women who went through the camps and survived. 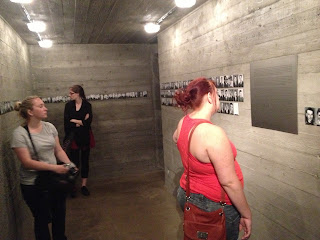 Afterwards, we walked through the peaceful surroundings that once made up the town.  Hitler had every home, business, and church dynamited and all the trees were cut down.  The area has now been transformed into a vast memorial. 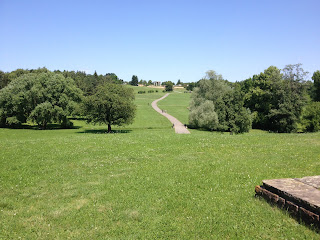 Each murdered child is separately depicted in the statue, but the murdered men only receive a plaque.  The contrast between the quiet, idyllic beauty of the place, and the horrors perpetrated there could not be more dramatic. 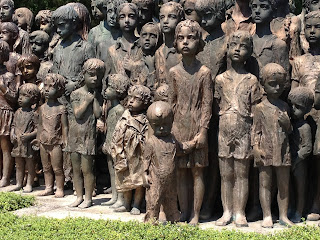 We then returned to Prague and I took the students to one of my favorite cafes:  Cukrkavalimonada.  The have a very eclectic menu, and some of the students tried drinks like hot grog and Irish hot chocolate, while most of the rest of us had the home made elderberry lemonade.  Last time I had the pasta primavera, so this time I ordered the “salty pancake with spinach,” which turned out basically to be a crepe.  I rolled it up and it was delicious. 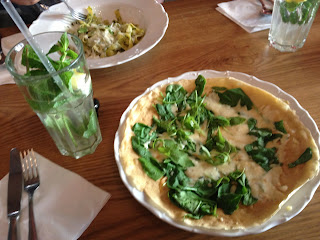 I knew I couldn’t pass up their desserts, so I ordered the raspberry pie.  It was very good and I think the students also like the place. 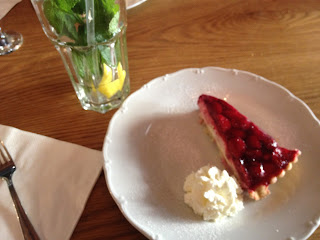 The John Lennon wall is just around the corner.  Begun as kind of a hippy expression of the 1980s under communism, the wall has taken on a life of its own. 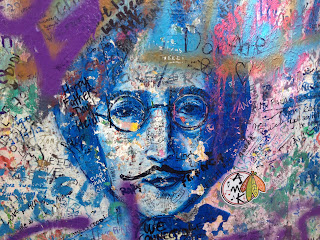 The café and John Lennon wall are in the neighborhood of Malastranka, which is a nice quiet counterpart to the mayhem of the Stare Mesto old quarter.  I wanted them to get a chance to a see a different side to Prague.  Afterwards we walked to the Charles Bridge; we had already seen it the day we arrived, but the weather was so miserable that day, I think they more suffered than saw it.

After some souvenir shopping, we made it the Old Town Square to see the astronomical clock chime the hours (though I warned them that this is vastly overrated.  Like many celebrities, it’s more famous for being famous than for any intrinsic value.

I really wanted to see the cubist museum again in the House of the Black Madonna, but the sign on the door indicated it closed last September.  Now I had an answer as to why I couldn’t find ticket prices posted online.  Instead, we went to the Museum of Communism, which I’ve always enjoyed. 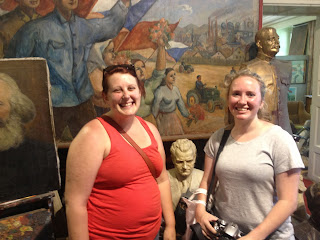 From there we headed to the Municipal House Café, which is one of the most beautiful in the world. 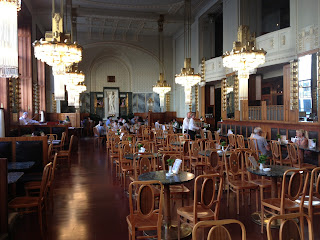 I ordered the vanilla ice cream sundae with hot raspberries and it was delicious. 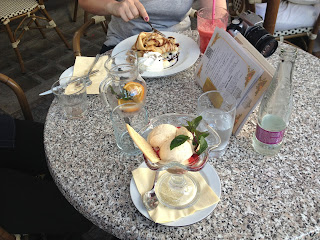 We met up with the rest of the students who had gone off shopping and then headed back to the hotel.  Some of us looked for a restaurant nearby, but what we found was pretty awful: 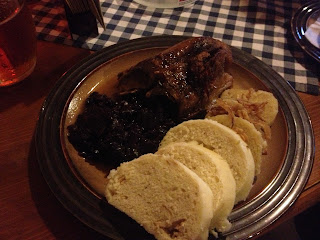 I won’t exactly miss the hotel, either.  I had read online that the elevator had problems, but I heard one student say “I’m scared of it.” 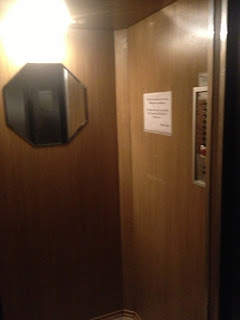 It’s not just that it’s rather small, but that there’s no inner door and the machine jerks to a stop each time.  Many of them walk up 5 or 6 flights to their rooms rather than take it.

The students like the free WiFi, but because it's only in the lobby, they camp out here in their spare time. 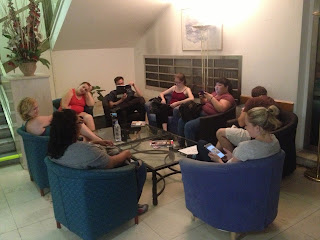 While the hotel is convenient, just across the street from the metro, it’s rather noisy.  It’s on the corner of two major streets, so there isn’t just traffic noise, but also sirens, and loud pedestrians. 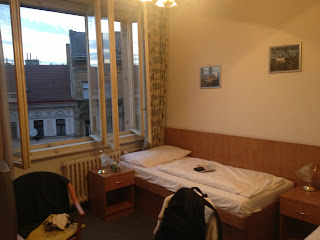 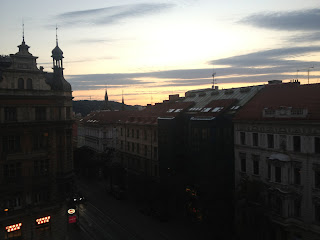 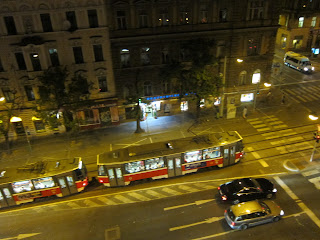 I also won't miss the food.  Last night, the menu had a particularly odd menu.  Check out the first entry. 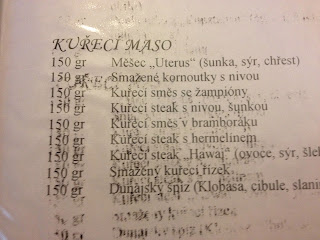 The general category is "chicken meat."  According to Google translate, that first time reads:

Tomorrow we leave for Vienna, and not a moment too soon.
Posted by J.B. at 1:28 PM