I usually read Chabon's The Amazing Adventures of Kavalier and Clay over breakfast.  Early on, I was surprised when the Czech Kavalier had an omelet with apricot jam for breakfast, as I had no idea anyone outside my family did that.  Apparently, it's a Mittel Europa thing.  Today I startled the breakfast room when I laughed out loud reading a footnote.  In referencing a clearly fictional comic book, the author adds that a copy turned up in 1995 "at an IKEA store in Elizabeth, New Jersey, where it was mutely serving as a dignified-looking stage property on a floor-model 'Hjörp' wall unit."  It was the "Hjörp" that did me in.

This morning I took care of some final organization for the student trip, and then went to visit a museum I'd been meaning to look at for some time.  Without saying which museum it was for the moment, I was intrigued by the architecture of the building and wondered about the relationship between form and function.  Would I look at the building any differently, if I didn't know its history? 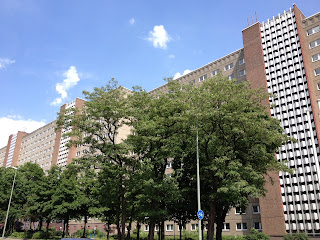 I've not been able to learn when this building was constructed.  Probably some time between 1960 and the early 1970s.  Its stone-flecked concrete facade is like so many other buildings erected in Berlin in those years.

And what if this building, in the inner court of the complex: does it have any resonances? 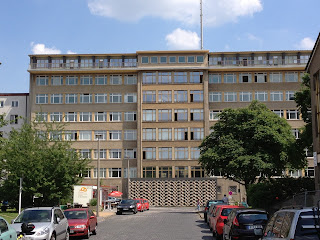 That odd shaped grill marks the car port for dignitaries to enter and exit.  It's far easier to see out of than into.  That's probably the only thing in the museum where the style seemed to match the function.

So what is this place?  Ominous music please.... 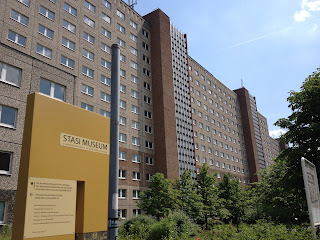 Yes.  The central offices of the State Ministry for Security (known by the acronym Stasi).  These buildings are actually home of the agencies that handled international spying and security.  The one in the central courtyard contained the offices of the head of the Stasi.

While I found the east German children's games, and other elements of popular culture fascinating, 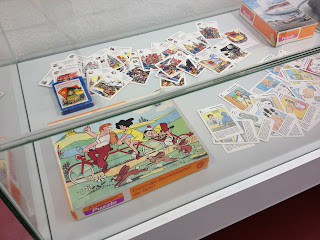 as well as the elements of western culture that were smuggled in, 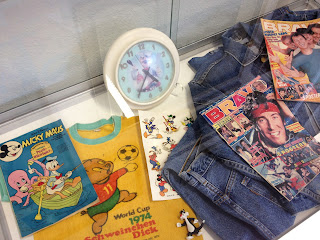 my main interest lay in the aesthetics of the totalitarian state.  For example, here's Stasi chief Erich Mielke's private quarters next to his office: 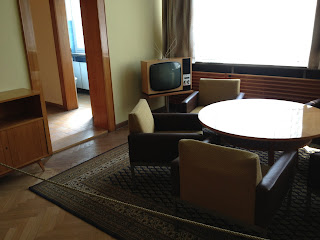 Or what of this cafeteria for senior officials: 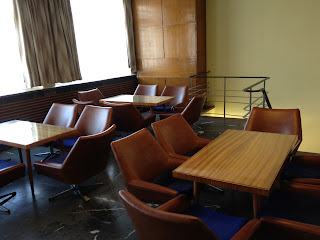 Or the main stair case in the building: 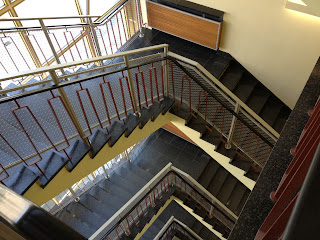 I'll let others get excited about the various ways to conceal a camera: 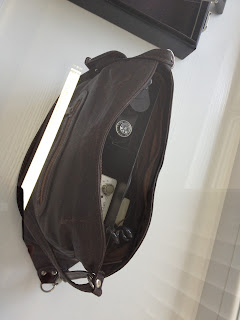 I'd much rather look at the intercom: 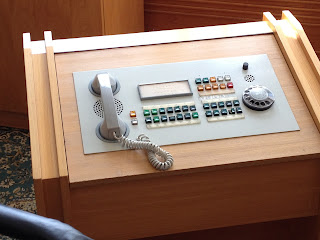 It was rather warm and humid in the building so I eventually had my fill of totalitarian chic and left.  I spent some more time in the area around the hostel to see where things are that my students might need.  Then I tried a new restaurant north of Alexanderplatz called Lebensmittal in Mitte.  I ordered off their non-traditional menu and had more guinea hen breast, this time roasted in lemon, thyme, and honey, accompanied by grilled chicory, grilled watermelon, and chips.  Oh, and some merguez (North African sausage).  I devoured it all. 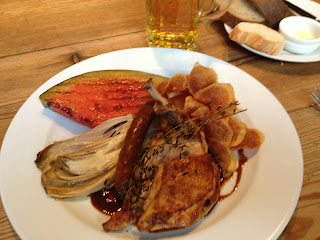 On my way out this afternoon, I noticed a lot of men on the sidewalk all wearing identical t-shirts that said BFC.  Eventually, I saw one with the letters spelled out "Berlin Fußball Club" (the Berlin Soccer Club).  They were all congregating outside a grocery store drinking beer.  I figured there must be a game tonight, particularly since the stadium is only a few blocks away.

When I came home after dinner, I could hear the crowd roaring from the stadium.  I walked over and saw the area crawling with policemen and police cars.  I decided to walk back to the pension.  Besides, there's no sound in the world scarier than hearing thousands of drunk German men chanting in unison, in German.  Until they suddenly switched to singing "Que Sera, Sera."  I still don't understand what that was about.

One day maybe I'll join you on one of your tours?

Sure. These trips are open to anyone; you don't need to be a student.