The Best Hamburger in Europe (that I've ever eaten)

Wow.  So today's been a rather long day too.  I woke up earlier than I wished in order to make my train to Dresden.  The train left the Hauptbahnhof at 8:46 am, but I hoped to have a tiny bit of breakfast at the pension, which is available as of 8:00.  I ran in, grabbed a roll, some salad caprese, and an orange juice, scarfed it all down in 8 minutes and ran off to the U-Bahn station.  At Alexanderplatz I had to run the three blocks to make my connection at the S-Bahn station and reached the Hauptbahnhoff with 7 minutes to spare.  I needed every one of them.

I'm looking for the platform for the train to Dresden and I can't find it.  I see a DB employee and said "excuse me, but can you tell me....."  "Guten Morgen!" he interrupted, officiously reminding me that I had omitted the necessary pleasantries of introduction. "Guten Morgen," I replied, "excuse me but can you tell me where I can find the train to Dresden."  "Dresden?!" he said.  "That's in the cellar!"  I was on the top level, the "cellar" was five stories down.  I started running down flight after flight of stairs.  Then I had to find Track 1, which was further back.  I finally saw the train, ran, and got on, with only a minute or two to spare.   Dripping with sweat, I found an unreserved seat, sat back, and tried to relax.

It was mostly a quiet ride, but I had some nice conversations with two British girls on a whirlwind trip around Europe.  They'd stared in Amsterdam (good bicycles and bad food) and had just finished with Berlin (they didn't like the graffiti and won't be back) and were on their way to Prague, before heading on to Budapest, Slovenia, Venice, Florence, and Rome.  I also had an interesting chat in German with a Czech woman in my compartment who'd spent the last 6 years in Berlin as an art critic and was on her way to Prague to visit her boyfriend.  We talked about the flooding and she told me it was worse in the Czech Republic than Germany.  The train lines were still open, but she was worried about the stop she would have just over the Czech border in Usti, where parts of the station were under water.

Coming into Dresden, we could see flooded fields.  I wished her luck and got of the train.  I walked through the new town and then the baroque old town towards the Elbe.  As I got closer, I could see where they had been stacking up sand bags. 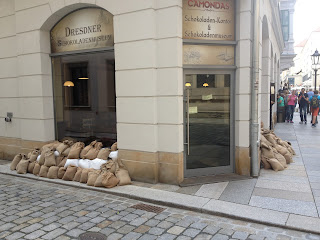 But the biggest shock was when I reached the Elbe itself.  The river level was just below the bridge, and while the steamboats that I had taken the last time were still afloat, their docks were under water. 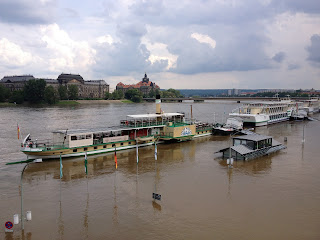 The Albertinum wasn't flooded, though given how close it is to the river, I could see how disastrous the flood in 2002 must have been.  I decided to have a quick lunch in the museum, as the weather outside looked like it might rain.  Just a salami sandwich and an elderberry lemonade. 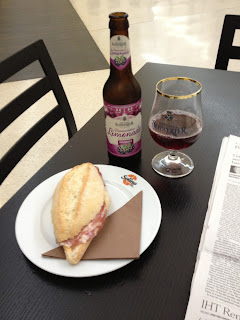 The inside of the museum is very modern, as befits a museum of modern art: 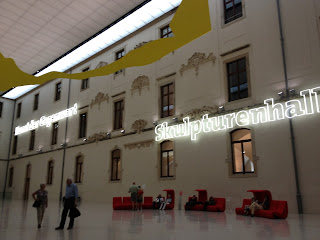 I couldn't take any photos of the exhibits, so here's what I saw.  I went up to the special exhibit on the second floor (over ground).  Called "The Shock of the New," the curators had created an exhibition deliberately designed to juxtapose romantic and contemporary artists.  There were four "tracks" of contrast, but these were interwoven with each other from room to room.  For example, one track had Caspar David Friedrich, Vilhelm Hammershoi, Gerhard Richter, and Mark Rothko, and was called "confronting the void."  So half a room might have selections from each, while on the other half were works by Eugene Delacroix, Edouard Manet, Max Ernst, and Jeff Wall, and was called "the body as arena."  Other tracks were "making the transient permament" (John Constable, Adolph Menzel, Max Liebermann, and David Claerbout) and "imagining the impossible (Eugene Delacroix, Paul Cezanne, Per Kirby, and Luc Tuymans).

Many of these juxtapositions were fascinating, though not all of them worked.  Claerbout is a photographer and one room was made pitch dark to display some of his slides in light boxes.   "Take your time.  Your eyes will adjust to the dark" said the signs.  About half a dozen Germans went in just before me and I could hear them saying things like. "Can you see anything?"  "Yes, it's getting clearer."  "I still can't see anything."  "No, no, it is getting clearer."  Eventually, I could make out his photos.  They were of Venice and the islands of the lagoon at night with no light.  Claerbout was in the group of "making the transient permanent," and the "transient" captured here was the darkness of the unlit city at night.  Not an easy thing to photograph or experience.

Of course this exhibit meant that some of their regular material wasn't on display.  In particular, I think they only had some of their collection of Otto Dix's work up, which was a disappointment.  They did, at least, have his massive triptych called "War," which is one of the most powerful anti-war paintings I've ever seen.  I'd seen it once before on special exhibit at the Zwinger in 2007 and was blown away bit it the first time I saw it.  He finished it in 1932 and the painting had to go into hiding to save it from the Nazis. If you want to see what it looks like, just google the words "Otto Dix, War, Triptych" though, it's far more moving and impressive in person where you can experience its enormity.

After about an hour and a half I had seen all there was to see, so I left.  It was a little after 2 and I wasn't sure whether I should try to catch the 3:04 train back to Berlin or spend more time in Dresden and take the 5:04 train.  I was kind of museumed-out and since the steam boats were gone as an option, I decided to head back to Berlin early.  Unfortunately, Deutsche Bahn had other ideas.  At the station, I saw that the 3:04 train was delayed 50 minutes.  I went and got a coffee and did the crossword puzzle in The International Herald-Tribune (which is still being published!  I thought it was being discontinued.  I buy it every day -- it's my biggest splurge since at 3 euros/day it adds up).

By the time I got to the platform, the train had been delayed 60 minutes, and in fact, it arrived 75 minutes late.  I would have been better off taking the later train.  Best guess:  delays due to flooding on the Czech side.  Once we got underway, it was very smooth and quiet.  Here's some of the high water visible from the train: 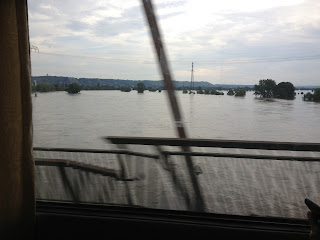 When we reached Berlin, I was hungry for dinner so I decided to try a hamburger place under the Schlieses Tor U-bahn line that my mother had written me about.  It's called Burgermeister (a pun since in German that means the mayor of the city, but in English it connotes, the master of the hamburger) and it makes the best hamburgers I've ever had in Europe.

It's located in what appears to be an old pissoir (you can still see the little sign saying "men"): 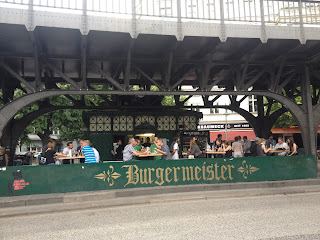 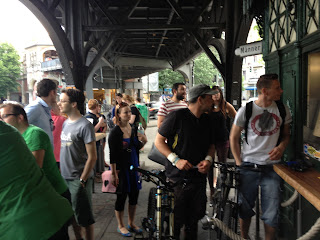 You put in your order, and then you wait.  I was confused at first, since I ordered a beer, but I realized that I needed to get it out of the 'fridge off to side.  When my number was called I got it and sat down to enjoy the only hamburger I've ever had in Europe that I liked (I've had lots of very bad ones). 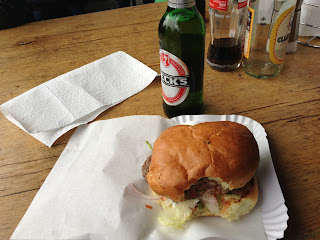 Afterwards, I walked about two blocks to the East Side Gallery, a long stretch of the Berlin Wall that has been decorated by artists.  Here are a few examples. 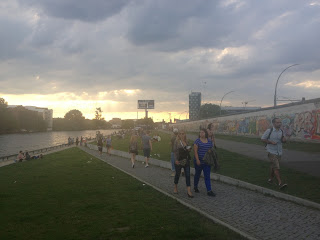 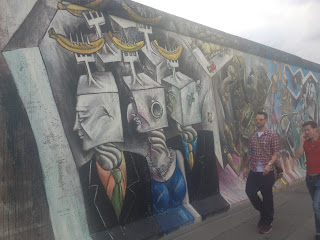 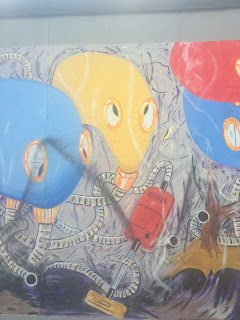 After that it was back to the pension.  I'm going to sleep early and hoping to rent a bicycle tomorrow.