Friday was a very successful day.

First, I was able to complete work on two more newspapers at the Staatsbibliothek zu Berlin.  Because I was working with original copies, they let me photograph what I'm looking for.  Here's a typical example of the type of news article I need for my research: 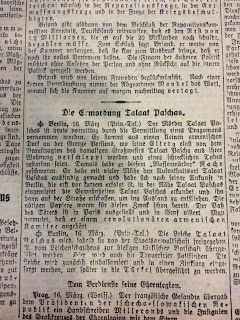 And here's what the interior of the archive looks like: 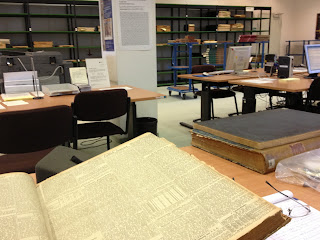 I still need to go back on Monday to look at a few more newspapers from 1921, but most of my work here is done.

After eating my sandwich, I stopped off at the kaffeehaus near my pension for a Milchkaffee and an Apfel-Quark Traum.  The later is an apple-cheese turnover.  The word "Traum" means "dream," not "trauma." 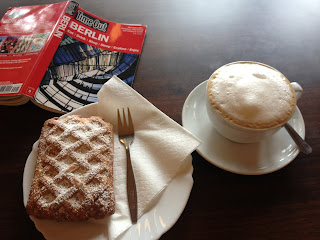 Second, I finally was able to get my hands on the printed court transcripts from the trial in 1921.  I was told that since it was still under German copyright, I could only photograph 20% of it.  I think I may have copied a little more.

As I was looking through it, I came to this page at the beginning where the editor identified all the principle figures in the trial, including, I was shocked to see, the jury. 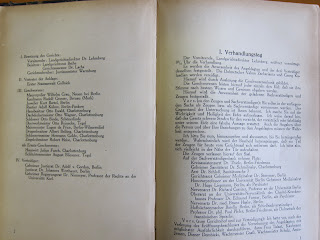 One word that stood out for me on this list was "Verteidiger" or "defense attorney."  I learned this word not in any of my German classes but from watching Fritz Lang's classic film M, where the serial child killer played by Peter Lorre is told that the criminals who are about to put him on trial plan to do everything by the book, even to providing him with a Verteidiger.  If you want to see the scene, click here and advance to about 4:20:  http://www.youtube.com/watch?v=jUDUbxsNjV0


Third, for the first time since I saw them in 2006, I successfully used the automated ticket booth at the Deutsche Bahn.  They've fixed it! In the old days, you had to make a reservation at one machine and then pay at another.  I never could figure it out.

To celebrate all these achievements, I took myself out to dinner at Gugelhof in Prenzlauer Berg.  It was a warm evening, so I sat out on the front sidewalk area: 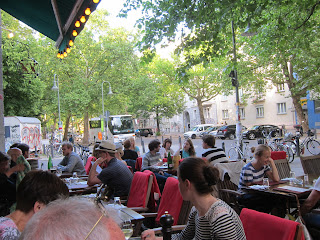 This is an Alsatian-style restaurant, which I've eaten at several times before.  Two of their specials appealed to me.

After the starter of bread, topping, and a large beer (along with a pitcher of tap water)I ordered the duck liver creme brulee, which came with a small side salad and a dollop of sweet red cabbage. 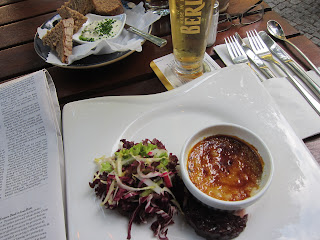 The creaminess of the duck pate took the place of the egg custard in a traditional creme brulee, but it still had the burnt sugar crust on top. 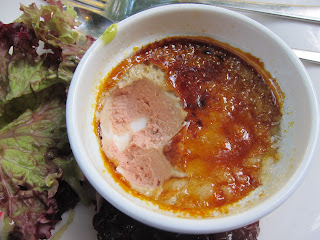 For my main course, I had roasted breast of guinea hen with an elderberry sauce.  The sauce had a dark, roasted wine flavor.  The hen (it was chicken sized) was moist and delicious with crispy skin.  I loved it. 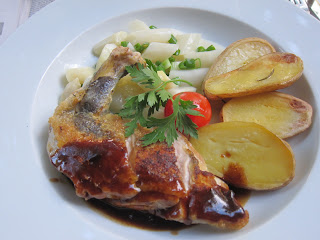 I chatted with a British couple at the next table.  He had been in the oil and gas industry before retiring and was familiar with the company my father worked for.  They said they had lived in KL for a while and enjoyed it more than Singapore.

Too full for dessert, so I just walked home.

I will post pictures tonight after I get back from Dresden.