We decided to try the Cervezeria Catalan for dinner. This is a top-of-the line tapas restaurant, near the Passeig de Gracia. On the way there, though, it was clear that we were all a little tired and cranky. The kids took a nap, but needed more time to rest after all the sun at the beach, and my parents and I were also a little tired.

The tapas on display looked amazing: 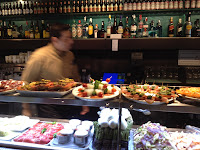 We thought Shayna might get the squid tapas, but she didn´t: 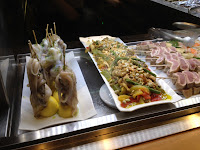 By the time the waiter reached my mother, he had decided we had ordered too much food, so he advised us to wait until our meals arrived before ordering more. While many of us were comfortable sharing various dishes, my mother has rather clear likes and dislikes and most of the kinds of tapas we ordered contained things she didn´t like (e.g., rare beef, ham, mushrooms). She liked the stuff zucchini blossoms and the grilled asparagus, but we called the waiter back to order a more substantive meal for her.

On the way back, we took a detour to see the Casa Mila. It was after 8:30 though, and we wanted to get back to watch the match between Spain and Portugal. 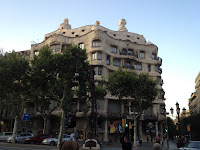 On the way, we passed a bar/cafe, so Matt and I stopped to watch, while the rest went home. I got Matt some water and I had a beer and we watched the first half, while the bar cheered for Spain. At the half, we walked the 10 minutes back to the apartment. The game ended up going into overtime and then to penalty kicks, which Spain won. They had dominated the game, so they really deserved to win.

When we got up this morning, Matt wasn´t feeling well. Both he and I got rather badly sunburned at the beach yesterday. While we were careful to repeatedly apply sunscreen, the lotion was only SPF 15. This morning, Matt´s stomache hurt and he didn´t want to get out of bed. We finally realized it was sun poisoning.

With Matt, Shayna, and my father sleeping in, my mother and I left to tour the Casa Mila, one of Guadi´s famous modernist buildings. An apartment block, he was careful to build in light shafts so every room could have natural light. There are no straight lines in the building. 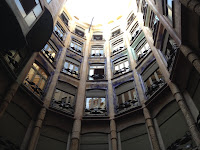 From the roof, there are spectacular views of Barcelona. This is the Passeig de Gracia: 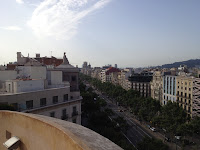 The Sagrada Familia cathedral, as framed through archictectural elements on the roof: 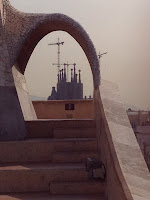 The smaller turrets are chimney tops, the larger ones are water tanks. 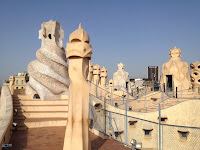 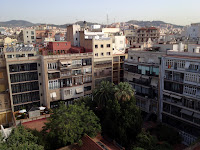 Another view of the distinctive water tanks and chimneys. I thought they resembled chess pieces, but my mother thought they looked like helmets from Star Wars. 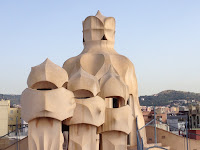 The tour continues through one apartment decorated to look as it might have 100 years ago. 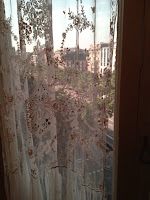 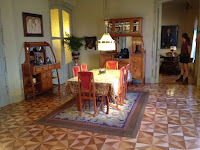 I loved these sea-creature inspired tiles. The entire Passeig de Gracia is lined with them, so I keep telling the kids to step on the Kraken: 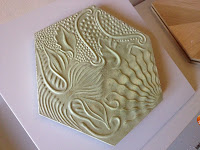 Beneath the roof but above the apartments are a series of arched areas known as the attic: 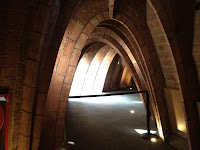 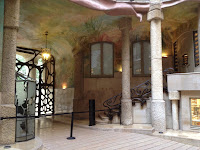 When we came back at 10:30, we found that Matt wasn´t merely tired but sick. Dad stayed back to keep on eye him, while my mother, Shayna, and I headed to the other major Gaudi building: the Casa Battlo.

On the way, I stopped by a pharmacy and used my broken Spanish to get some stuff for Matt. I said: "I was at beach. I have pain.¨ I pointed at my red skin and said "ow! ow! Cream?" She gave us some ointment with aloe vera. 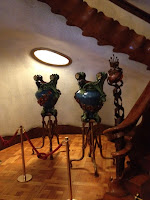 Here are the doors to the salon: 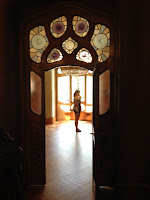 This little alcove with a fire place as a seat for two people on one side, and their chaperone on the other: 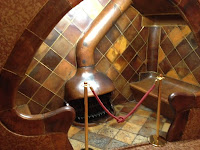 The chandelier in the salon 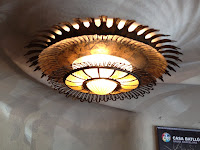 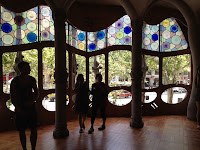 There are strange sea shapes on the back patio: 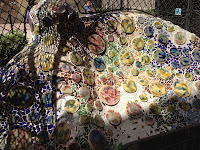 The fantastic shapes ocontinue on the roof with this garlic shaped monument: 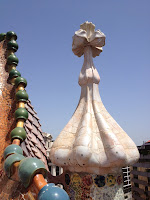 And this dinosaur shaped one, which hid the water tanks: 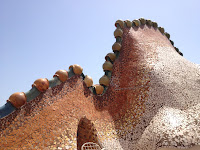 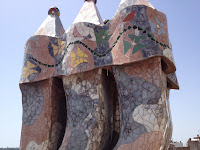 Each floor had two apartments, eached marked by a letter in a nautical shape. This is Apartment E. 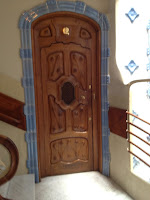 As in Casa Mila, there are beautifully designed light shafts to bring light down to all rooms. 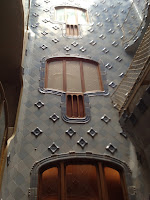 This double pillar partially blocked the entrance to the patio, but not clear why. 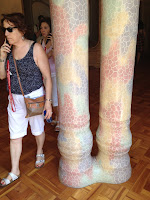 Mom, Shayna, and I had lunch at Qu Qu. They ordered salads, while I had a series of tapas. The final one to arrive was a trio of mini hamburgers with different toppings: mustard, onions, and cheese. I asked Shayna if she would like to try any and she chose the mustard. There was a lot of horse radish in the mustard and it was clear she was rather shocked by how strong it was. She handled it fine, though.

Afterwards we walked back to check on Matt. He was doing a little better, so my father and I walked to the market to buy him lunch. They didn´t have prepared sandwiches, but if I brought a roll to the charcuterie, they would fill it with manchego cheese and jamon iberico. We made a second for my father, and bought some apple tarts to go with them.

Back at the apartment, Matt was feeling better from the lotion and ate half the sandwich. Then we all took a nap.

Originally, we had planned for me to take the kids on the cable car, but that didn´t seem likely to happen. I looked through the guide book and realized what to do. "Who wants to go to the Museum of Chocolate?" I asked. I heard a weak "I do," coming from Matt´s room. I said I would leave in 15 minutes. Unsurprisingly, both were ready by then.

It took a little while to find my bearings, but eventually we got to the museum. When I mentioned the Picasso Museum was nearby I heard a loud, moaning "no!" from Matt.

Both kids loved the fact that their tickets for the museum were dark chocolate. Basically, the museum is a tourist trap designed to sell chocolate to tourists, but it worked for the kids.

Here´s Matt in front of a chocolate statue of Tom and Jerry: 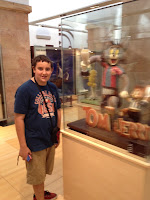 And here are Matt and Shayna in front of a version of Gaudi´s dragon from the Park Guell, made out of chocolate. No problem getting them to smile here: 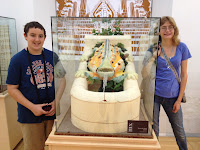 Afterwards, I took them to the cafe and said they could either have something to eat or to drink. Shayna and I had the hot chocolate (Shayna said it made her feel very European), while Matt had the cold chocolate shake. 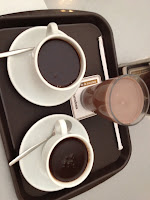 I tried to interest them in a repeat visit to the Mercat de Bosquiera, but they weren´t interested and we went back to the apartment.

I´m out of time. I´ll finish this when I return to the States tomorrow.
Posted by J.B. at 9:07 AM

I think I ate in that Tapas place in BCN. A friend/local took me there. Just steps from Sagrada Familia as I recall.