For the first time in two weeks, it was cool enough last night that I could open a window. Today was much nicer than any weather we’ve had almost since I arrived. I arrived at Yad Vashem just before the morning session began. Today was called the “pedagogy day,” and was devoted to new teaching approaches to various aspects of the Holocaust. Before it began, though, the organizer got up to issue a disclaimer: when Prof. Yehuda Bauer spoke last night about the , he was speaking only for himself. Yad Vashem, he emphasized, has a good working relationship with the and will continue to do so in the future. I turned around and asked the guy behind me what Bauer said. He paraphrased him saying that “he’s afraid of what he might find if he went into the .” I could only laugh. God, I wished I had heard him last night rather than go to the avant-garde Israeli film.

The opening session was a two-hour panel discussion about the relevance of the Holocaust in the 21st century. I didn’t feel that I was really learning anything, so I left about two-thirds of the way through. Luckily, the smaller workshops were far more interesting and valuable.

I started off with Rafael Medoff’s talk on teaching the Holocaust through editorial cartoons from the period. 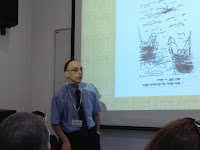 The cartoon Medoff is using in this slide is from a Jewish paper in in the ‘30s. The text reads, “where are you going Reb Yehudi?” “From the Black Sea to the and back.”

He’s working on a new book, using mostly American and British cartoons (including a striking one from Dr. Seuss), and it got me thinking how this might be an interesting way to get more class discussion. I could open each class with an editorial cartoon related to the subject of that day (including some Nazi cartoons), and use it to get the students to engage more with the material.

I spoke to Medoff at the lunch break about inviting him to to speak. He asked if it would be for Yom Hashoah, and I said not necessarily (I can’t commit the other institutions that organize that in ). But I do have the funds to bring him out myself and I think I could easily find a class on campus to host his talk to students, while then having him do something similar or less academic in the evening to the whole community.

He was followed by Tali Nates from , who reviewed the materials she uses in teaching the Holocaust in the S. African school system. She had a few quotes and materials I could easily see using in my class, so I got her email to correspond with her afterwards. Strangely enough, her family came from Nowy Targ, the same small town where my grandmother’s family is from. We joked about being cousins and she promised to get me some of the material she’s collected on the ghetto.

The second pedagogical session I went to was divided into thirds, but it was only the middle third that interested me. This was given by Dr. Navas Jaat Aafreedi, an assistant professor in the Department of History and Civilization at in , and his topic was teaching the Holocaust in . He turned out to be a rather excitable young man who tried to cram an hour’s worth of material into just thirty minutes (unsuccessfully).

I’m not sure what to make of his talk because a lot of what he said was rather shocking and highly political, and he was speaking so fast, I was basically just scribbling notes as quickly as I could. When I get back, I need to check with some of my colleagues who do India Studies to verify his claims.

He began by stating that neither Jewish history nor the Holocaust are recognized as academic disciplines in and can’t be taught openly. He then proceeded to make a serious of equally provocative claims, including:

1) Most Indians are unaware of either the Holocaust or Jews

2) Hitler is becoming an increasingly popular and admired figure in

4) All of the above is conducive to the spread of anti-Semitism in .

He should the results of several surveys he’s conducted of students in his college. In response to the question, what does the word “holocaust” mean, most students were able to answer correctly that it concerned the genocide of the Jews, but this was only true, he claimed, because of his efforts over the last two-three years. A discernable fraction thought it meant “heat,” while others suggested “homeopathic medicine,” and “a chemical compound for killing.”

He then discussed a scandal involving how until 2002, the “standard X history textbook” in didn’t mention the Holocaust. Even after complaints, they only added that Jews were killed, but they’ve never tested on it.

From there he segued into how Hitler’s popularity is growing in . These include:

3) The appearance of film and tv characters named after Hitler

7) The sale of a brand of bed linens called “Nazis.”

8) Some Hindu hardliners have been quoted as saying “Hitler did the right thing with the wrong people.”

Some Indians, he claimed, look on Hitler has having aided Indian independence by weakening British rule.

He then very briefly reviewed how he has infiltrated Holocaust education and Jewish history into the curriculum, by never openly listing it on the syllabus, but by using vague code phrases.

Who opposes Holocaust education? According to Aafreedi, it’s a combination of Hindu rightwingers and Muslim anti-Semites. When he held the first Holocaust-related film festival in in 2009, the two leading and most widely distributed Urdu-language daily papers issued front page stories denying the Holocaust.

All this was a lot to take in, and as I wrote above, I want to verify these claims with my colleagues who do studies.

The final talk I went to this afternoon was on bi-national meetings of young people as a pedagogical method. This talk was given in Polish with a translator. What they’ve been doing is bringing over a hundred high school students from to every year to meet with Polish high school students. He then described the various ways they organize this and both the benefits and risks. I took a lot of notes, since I try to do something similar when I take college students to on the Holocaust study abroad trip.

After that I went back to Jaffa Road/Ben Yehuda and did some shopping and had a kafe hafukh before heading back to the hotel. I went back to the Grand Café one last time and ordered their mix mushroom open lasagna one more time. It’s very good: 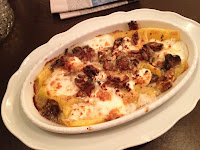 When I left the restaurant it was cool and breezy. It was the nicest weather I’ve had in so far. Walking to the restaurant, I passed a street that had been closed off by the police and there was some sort of carnival at the far end. I decided to check it out after dinner, but the carnival was gone. I could still hear music though, and as I approached , I could see the carnival had moved. Only it wasn’t a carnival at all, but some sort of religious event.

I thought at first it was maybe some sort of missionary work by Habad or the Breslovers, but instead it was a big ceremony to welcome a new torah scroll to the synagogue.

According to one of the electronic signs, the new scroll was named in honor of a certain person “of blessed memory.” I can only assume the family commissioned the torah in his honor. 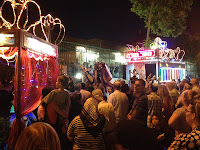 As I came up, I could hear someone on a loud speaker saying “first, we will say the ‘Shma,’ then blow the shofar, and then sing ‘Mizmor l’David’ as we bring in the new torah into the synagogue.” 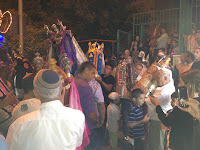 Based on the shape of the torah containers, this is a mizrahi community (they also had a mizrahi accent in their Hebrew and melodies. After they blew the shofar, they started the procession of the Torahs into the synagogue. 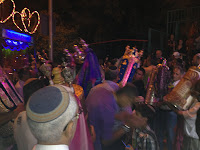 One man was throwing candies at the torahs, the way I’ve seen family members do to the bar mitzvah boy at a mizrahi bar mitzvah.

So tomorrow is my last full day in . I head down to the Israeli State Archives in the morning one last time to make one last photocopy. After that, it’s off toYad Vashem for the last day of the conference. On Friday, I leave for Tel-Aviv, and then on Sunday, I have a 5 am flight out of . The work part of my trip is almost over.