This morning, I took the #14 bus to Givat Ram. While the winding route it takes through the Greek Colony, Katamon, and Talbiyah, before reaching the main government institutions was familiar, the time waiting for it wasn’t. In the past they used to post bus schedules; now, you’re just expected to know it only comes every half hour.

The National Library has been improved. I learned how to use the new system and started calling up books from the stacks. Last time I was here, I spent most of my time in the Jewish Reading Room. I popped my head in to take a peak, and it’s just the way I remember it: filled aging scholars all intensely hunched over their tables and laptops, furiously typing (or occasionally scribbling) away. This time, I had my books delivered to the general reading room, which is a far calmer and friendlier place.

While I waited, I admired the beautiful Ardon Windows, by the Gershom Scholem Library, but when I looked for the periodicals room, to my disappointment, I found it was gone. Nothing to distract me from work. 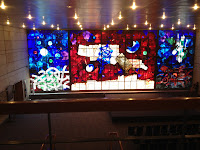 Anyway, it was a good day research wise. Found most of the stuff I needed, including the last book for the annotated bibliography I’ve written. Now it just needs another round of editing. After that, I will start editing the article I’ve written to go with it. That’s pretty close to being done, too. I’m also feeling much more confident about the article I’ve been researching here, and I think I can get a draft done before the new semester starts.

After enjoying my regular afternoon coffee at Aroma, I set out for the hotel to start cataloging my photocopies. But oh, the heat! In the low 90s! By the time I got up the hill, I was sopping wet and needed to change my shirt. I waited ‘til 7, when things would be cooler, before heading out to dinner.

I decided to stick to Baka tonight. It’s very similar in style to Emek Refaim, but not as crowded. Lots of beautiful buildings from the 1920s and ‘30s. 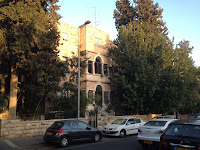 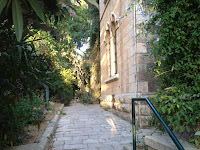 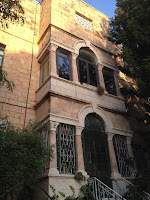 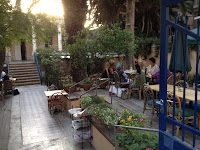 Dinner at the Grand Café again (though inside because of the heat). 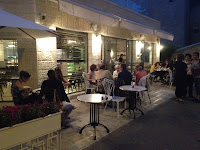 The neighborhood has a nice feel in the evenings. 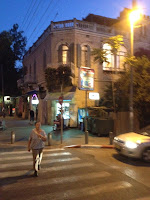 On the way back, I noticed a bar had a big screen tv set up for the Denmark-Portugal game, so I bought a beer and watched the last 30 minutes. Pretty exciting stuff!

Tomorrow it’s back to Givat Ram. I need to talk to the hotel manager as I’ve decided to leave the hotel a day earlier than I planned. My flight out is 5 am, Sunday the 24th. I’ve decided to head to Tel-Aviv the Friday before to stay at Ofer’s; that way, I can take a nap Saturday afternoon and take a taxi or sherut to the airport sometime after midnight.