Here´s a shot of my niece and nephew at La Mercat near La Rambla in Barcelona. I meant to post this yesterday. 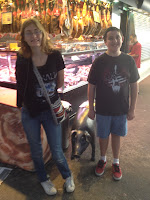 After I finished posting yesterday´s entry, I came out of the internet cafe and ran smack into Marie, a colleague of mine in the History Department, and our specialist in medieval Spain. We knew we were going to be Spain at the same time, but thought that our trips to Barcelona wouldn´t overlap. As it happens, she forgot something and had only returned to Barcelona that day to retrieve it. She was just heading to the train station and so we briefly chatted along the way. I have a great shot of the two of us, but it didn´t upload yet, so I will try to post it tomorrow.

I asked her if she could recommend a good restaurant, so she gave me two. We chose the closer of them: Origens. Their menu is like a cooking magazine, with each entree featuring small photos of all the major ingredients and a brief recipe of how it´s made. We all loved our meals and my father wants to go back to try other things.

Afterwards, we walked up to see some Gaudi buildings. This famous building by Gaudi is part of the so-called "Discord Block" on the Passeig de Gracia. 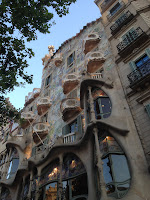 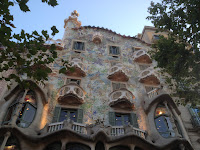 My mother describing the history of the building to my niece and nephew: 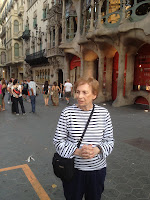 After we got back to the apartment, Matt and I went to see La Sagrada Familia at night. Matt wanted to see it lit up. Here we are in the park in front of it: 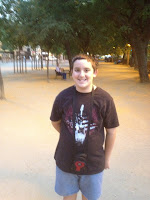 We came back as a group this morning, walking about 15 minutes from the apartment to get to it. We waited about half an hour in line, vigilantly defending our spot against a group of French tourists who tried to cut in front of me. We walked around the outside of the cathedral (which is still under construction), and then went inside. Apparently, they´ve made a lot of progress with the cathedral, including finishing about a third of the stained-glass windows. 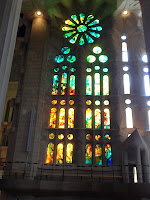 We knew that my other nephew, Josh, would be in Barcelona today, but we didn´t know what his schedule would be. He´s traveling through Spain, France, and Italy with his 10th grade class. Sure enough, we ran into him at the cathedral: 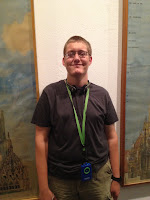 One of Matt´s friends, Ben, was also on the trip with Josh, so Matt and Ben had a chance to catch up: 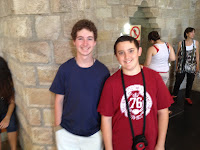 Matt was pleased to see his 9th grade Spanish teacher: 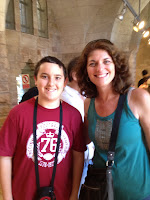 Matt, Shayna, and I decided to take the lift to the top where we could see the cathedral under construction, and the spectacular views of Barcelona: 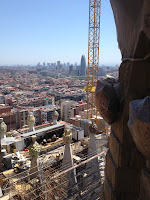 Afterwards, we came back down, found my parents and left.

After we left La Sagrada Familia, we walked a block away and had lunch. It was too hot to sit outside in the sun, and almost all the covered tables were taken, so we ate inside. I have to say, I wasn´t that thrilled with the meal, but everyone else was pleased.

We took two taxis to Parc Guell, a Gaudi-fantasy construction on a hill top above Barcelona. The entrance has the "Hansel and Gretel" houses, which give you a sense of the overall style of the place. 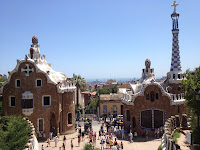 We made our way up the site, ultimately resting under some umbrellas and watching the crowds and the view. At one point, all the guys selling trinkets started to run as a mob past us. Apparently, the police had arrived. Eventually we made our way back to the entrance. We tried to get a taxi that could accommodate us all, but they wouldn´t take us out of the queue. In the end, we walked down the hill and grabbed a bus.

When we reached the intersection of Passeig de Gracia and Valencia, they all headed back to the apartment, while I walked down and picked up The International Herald Tribune. I walked to the cafe by the apartment, got a cappucino, and read the paper.

Tonight, we´re going to the theater to watch some a flamenco dance and music, so they´re all napping.
Posted by J.B. at 8:11 AM