I decided to check out Focaccia Bar, a nonkosher restaurant open every day in the center of the city. Right next to it I found an Aroma Café that was open, so it turns out there is at least one that remains open on Shabbat, but it’s too far away to be convenient (besides, this was my last Shabbat in for this trip).

Focaccia Bar was full, but there was space at the bar; all the tables and the patio were full: 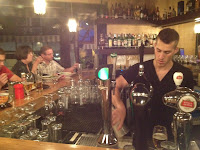 I ordered the chicken fettucini and it wasn’t bad, not heavy the way it can be in . The place was packed and afterwards, I walked down to Babette’s Feast for one last waffle. I got there around 9, but they hadn’t opened yet and there was a line. I decided to try half with chocolate sauce and have with vanilla cream. The chocolate sauce went everywhere, making a mess, but the vanilla was very good. I’m tempted to go back to try what they call “butterscotch,” but sounds a lot more like “dulce de leche.”

This time I took the right bus back, but it dropped me off in Emek Refaim and the walk back up the hill in the heat left me covered in sweat.

Today I knew the weather was going to be bad. The forecast high for was 35 C today (same for tomorrow), hotter than at any point of the trip so far. “Unseasonably warm,” was how Israeli tv put it.

Lots of success at the Yad Vashem archives; I managed to get all the remaining articles I needed from them. I noticed that they are having an international conference on Holocaust education starting on Tuesday, so I asked if I could attend. The answer was yes. I have the schedule.

Since I had some free time, I took a more leisurely tour of the new revised exhibit at Yad Vashem. Here's the model of the revised layout: 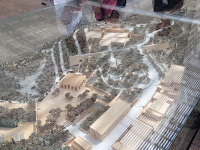 It’s large and overwhelming, with many moving exhibits and artifacts that are really striking if you know the history of where they came from. I still wish, though, they were more universal in their presentation.

When I came out of the archives, I noticed lots of soldiers who had arrived, sitting in groups or getting ready.

I saw them again on the tour, each small group with a guide leading them through the exhibit.

By the time I reached the hall of names, I just started crying uncontrollably. I felt a little self-conscious among all the soldiers in there, so I managed to stop and walked toward the exit.

They wouldn't let me take photos inside, but I could from just outside: 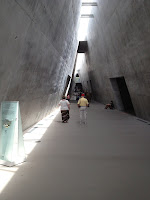 And the view of the hills of Jerusalem from the museum: 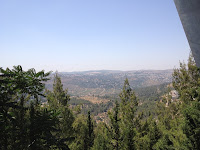 As I approached, I could feel the waves of heat coming through and I thought for a while if I wanted to go out into it. I walked a short way to the gift shop and bought a new book on hidden children that I had done a quick review of for the article I’m submitting at the end of the month, and which I thought was excellent. Then I went to the art section where I managed to sneak a few pictures. Given the low light and my inability to focus the cell phone camera, these may be a little bit blurry.

This is Felix Nussbaum’s The Refugee, from 1939. Nussbaum went into hiding, but was later captured and murdered. 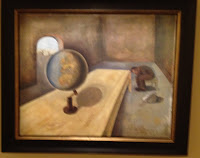 These are set designs from performances in the Theresienstadt (Terezin) ghetto: 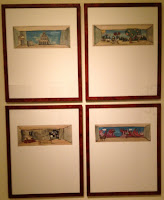 I really didn’t want to go back outside, but I made my way to the Central Bus Station where I went to the Central Zionist Archives. Unfortunately, they had closed for the day about a half hour before, but now I know there schedule. I caught another bus and got off in the city center to check out a used book store to see if they have the textbook for which I have been searching. The owner is sure they have it, but he couldn’t remember where. The place has books stacked floor to ceiling three rows deep, so after an hour I gave him my email and left.

In the meantime, Tel-Aviv public library emailed me to say they have the volume I need and it will be available to me until the end of the week. I’ve decided the following:

I’m going to the Central Zionist Archives first thing tomorrow morning and order the two files I need. After I copy them, I’ll walk across the street to the Central Bus Station and go to Tel-Aviv. From there, it’s a short bus ride to the Tel Aviv City Library. If it turns out they don’t have the volume I need, I’ll submit an electronic request to the National Library and see what they say. Then I’ll return to .

With any luck, by tomorrow night, the only item remaining on my to-do list will be to try to photocopy the documents I already photographed at the Israeli State Archives. Then I will be able to enjoy the conference presentations without anything to worry about.