The more I think about The Best Exotic Marigold Hotel the more I think that the plot doesn't entirely work. I never really connected with Penelope Wilton's character (the one who won't leave the hotel), while the transformation of Maggie Smith's rather vile character seems totally out of character. It was enjoyable, but more fluff than substance.

Thankfully, no more djookim last night, but instead, my cell phone decided to ring incessantly at 1:30 am. I didn’t even know I could receive calls here, but apparently the iPhone works in . I don’t have a cell plan that could make such calls affordable, though. At first, I couldn’t figure out whose phone was ringing, until I realized it was my phone. Luckily, I had no problem falling back asleep. 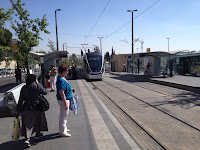 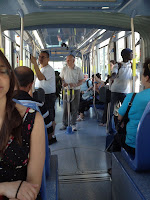 It took almost 45 minutes to get to stop by Yad Vashem, and then another 10-minute walk to the memorial’s entrance. There's another path that starts just from the entrance that links Yad Vashem to Herzl's grave. If I have time, I'll walk it later: 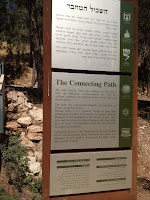 This time, though, I wasn’t going to the memorial, but to the library and archives, which are located a little to the north and east of where most people go. Yad Vashem was in the news today because some vandals, believed to be extreme ultra-Orthodox, spray painted anti-Zionist graffiti in several places. I wasn’t in any of those areas, though. From what I could see, it all looked the same as usual: 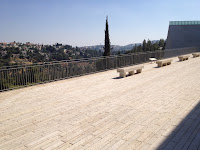 There’s always a bit of learning curve when going to new archives. My main goal today was to finish looking up books for the annotated bibliography on children and the Holocaust that I’m submitting at the end of the month. I found everything I needed, though just now when I was making the edits, I see I over looked one last book. I’ll take care of that tomorrow at Givat Ram.

I then started pulling up articles related to Holocaust curricula in Israeli schools and so far, I’m in the clear on my plans to write an article on the subject this summer. I hope to have it ready to submit before the start of fall semester. There are a few more articles in Hebrew I still need to check, and there’s one dissertation I need to look at. Luckily, I can find all of them in the National Library of Israel (which is a far easier name to pronounce than the Jewish National and University Library, which is what it used to be called when I did most of my dissertation research in '98-'99).

I also wanted to see if I could find any of the original responses to the survey I found in the State Archives and which I hope to write my article on. No luck, unfortunately, though I did find one file on the Holocaust curriculum committee. I had already seen other copies of most of these documents at the State Archives, however.

There's a nice view from the archives, but I didn't think they would let me snap a photo inside, so this is the same view, but from just outside the door: 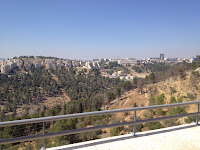 There's a sculpture just in front of this that looks like it was created by the same artist who did one of the ones in the Jewish museum in Berlin, only there the floor was covered by them: 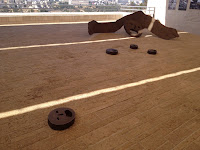 By 3 pm, the archives started to fill up with people looking for relatives, quite loudly, making it difficult to work. Lots of yelling at the staff, at each other, etc. I went back to Emek Refaim for my daily routine of buying the International Herald Tribune (which includes an English-language edition of Ha’aretz), but they were sold out so I had to settle for The Jerusalem Post. I was hoping to watch the Russia-Poland game tonight, but the hotel’s limited tv selections do not include any station carrying the game, and I didn’t see any cafes with tvs set up to let patrons watch.

Tomorrow, I’ll head out to the Givat Ram campus of . This was set up after 1949, when the original campus was inaccessible. This is where the National Library is located and where I spent over half a year working on my dissertation. Luckily, there’s a direct bus from Emek Refaim (though direct may be somewhat misleading, given the amount of twists and turns it takes and is goes up, over and around hills, while stopping at both the Israel Museum and the Knesset before reaching Givat Ram.