Today was my last day of research on this trip. I headed back to the Israeli State Archives and I had no problems whatsoever. They had the file I requested; I quickly copied it; and then I was on my way to Yad Vashem. 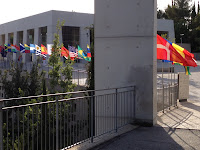 Today’s session was labeled “Special Interest Groups,” and I missed half the morning panel because of the hour it takes me to get from one end of the city to the other. I didn’t find the latter two speakers on the panel all that interesting. At the lunch break, I had a long and interesting conversation with the head of the Hebrew program in . We spoke some Hebrew for awhile and I apologized for my poor accent. I was very pleased to hear her say that I didn’t have a strong American accent in my Hebrew, but surprisingly a slight German accent. The funny thing is that I’ve been told I have a slight Hebrew accent in my German (particularly in the way I pronounce the “ch”).

After lunch, I went to the panel on teaching the Holocaust in universities and secondary schools, but again, the conversation really didn’t apply to my own work, and so I left to tour one of the special exhibits on Holocaust art.

This is a fascinating collection of portraits of Jews, mostly prisoners, done by other Jewish prisoners who were artists. Most hid their sketches and recovered them afterwards. Here are two examples done in Theresienstadt (Terezin) of prominent Jewish composers, later murdered in . 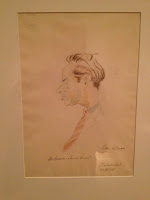 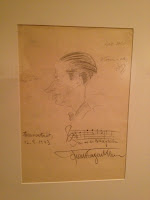 The next session was an opportunity to hear a survivor’s story. I decided to hear the story of Yehudith Kleinman, who was born in , in 1938. Her father disappeared the day the war broke out and she lived with her mother and grandmother in until 1944 when her mother and grandmother were summoned to the police station by the Nazis along with a Christian neighbor. At age 5, Yehudith was asked who she wanted to go with her mother or the Christian neighbor. Seeing her mother’s expression, she chose the neighbor and lived.

The neighbor took her to a convent, which agreed to hide her. After great difficulty, she agreed to cross herself and perform the Christian prayers, while she waited for her mother to come for her. In 1945, when she was 7 and a half, she was told a man and woman were waiting for her with the mother superior. Sure it was her father and mother come to claim her, she raced to the office only to find two people from a Jewish organization, come to take her to . As the Jewish representatives argued with the mother superior, Yehudith had to choose whether to stay in the convent or go with the two strangers. She hoped her mother was waiting for her in , so she chose to leave.

She’s written a book about her experiences called The Girl Behind the Eyes.

At 4 pm, they had a reception with desserts and fruit, so I went there and ended up talking with a German teacher from and an Israeli whose family came from . At one point we were all speaking German, and the German remarked how odd it was to be speaking German with two Jews in .

The final session wasn’t really anything worth writing about.

I headed to the center of the city to change some extra shekels into euros. On Sunday, I’m leaving for and I didn’t want to try to change a lot of money at the airport after midnight.

There’s a bookstore/coffee shop in the Nahalat Sheva neighborhood called “Tmol Shilshom that I really like and hadn’t visited this trip, so I stopped there for a large kafe hafukh. 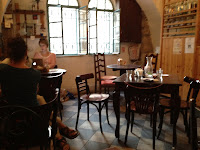 After that I walked next door to Shanty and tried one of their daily specials: homemade fettuccini with roasted peppers, shrimps, and cream sauce. 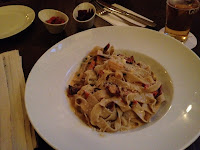 It was getting late and I wanted to get back to watch the game, but I made my way through the alleys of Nahalat Shevah for one last visit: 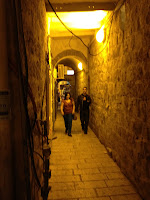 My last stop was the place formerly known as “Babette’s Feast.” I asked what their current name is, but they haven’t decided yet. I ordered one last waffle: half vanilla cream, half dulce de leche. It was excellent: 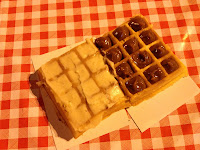 I returned to the hotel, dropped off my stuff, and then walked down to Baka to watch the quarter final match between and the Czechs. I watched the first half on Israeli tv at a bar with a big screen tv set up outside. After the break, I came back to the hotel and am now watching the second half on the German tv channel in my room.

Tomorrow morning I leave for Tel-Aviv. The hotel won’t refund me my last, unused day. Instead, they told me, if I come back, they will credit me with a free day. I can’t believe I’ve been in only three weeks. The work part of this trip is over; now I’ll have a short vacation in before I return to the States in a week.