After a brief nap yesterday afternoon, I headed out towards sunset. My plan was to have dinner in the , and I wanted to wait until the sun was close to setting so that it would be cooler. A little after 7 pm, I heard the siren go off, which indicates Shabbat will start soon (although, the sun didn’t set for another half hour). I decided to try the Armenian Tavern for dinner. I’ve had mixed results here over the years, but thought it time to try again.

It’s located below ground in a Crusader-era building on the edge of the Armenian quarter and has been sometimes been described as the prettiest restaurant in . 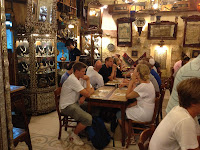 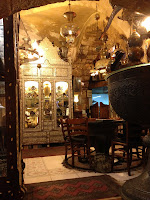 On Friday nights they have special entrees, so I ordered one. It’s called sinyeh, and the waiter wanted to make sure I was prepared for what I was going to get. The menu describes it as ground beef, onions, potatoes, bell peppers, and tehina, but the waiter wanted me to know that there would be a lot of tehina. Is it a heavy dish, I asked. Yes, but a good heavy, he answered. There just would be a lot of tehina on top. I said I would try it.

Before that, though, I started with jajook, which is a mixture of cucumbers and yoghurt with paprika on top. Then came the sinyeh. Yes, there was a lot of tehina. 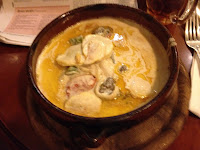 Actually, though, it was quite tasty. The ground beef had the texture of a kebob (it was formed into cooked patties) and there was a fair amount of it (you can only see two little islands of beef sticking out from the sea of tehina). While I wasn’t going to eat the sauce like a soup, I didn’t find it offensive or cloying and would order it again.

By the time I left, it was fully dark: 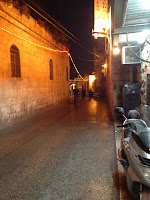 After that I walked down from the Jaffa Gate through Gai Ben Hinnom (aka Gehinnom aka hell) until I reached the Cinemateque. I was still about an hour early, so I sat at the bar in their restaurant and asked for a dessert menu. I was curious about something called “a krembal” made from seasonal fruits and with a scoop of homemade vanilla ice cream. They told me it was a “crumble.” I ordered that and their homemade limoncello, which was very good. The crumble was tasty but too large; it would have served two people nicely.

The film I went to see afterwards is Salmon Fishing in the Yemen, which turned out to be a rather sweet and inoffensive film. It needed more of the astringency provided by Kristin Scott Thomas, and I was happy whenever she was on the screen.

I slept in this morning, and didn’t come down to breakfast until 8:30. I was curious what they would have and they surprised me with hallah, instead of the grayish whole wheat bread that vaguely resembles what the Germans call vollkorn. I had a nice breakfast, grabbed my 1.5 liter water bottle and headed off to the around 10.

It was already hot and in the mid-80s F in the shade, so I took the roundabout way via Mamilla, to avoid having to make the climb through hell (see Gai Ben Hinnom, supra). I love spending Saturdays in the and most of the shuk is covered and cool. 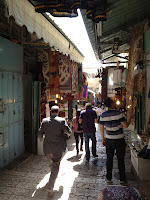 I never miss a chance to climb up on the roofs over the market to get the spectacular view of the Dome of the Rock. 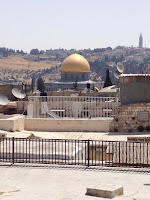 Then I made my way, first through the Jewish Quarter and then down the Mamluke and Ottomon cardo. This is the elaborate door of the "kabbalist" yeshiva: 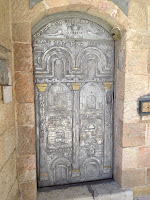 Along the way, I passed an Arabic sweet shop. A German guide was explaining about kanafe: 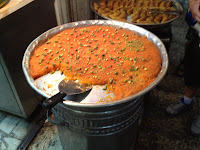 This is a very sweet and tasty dessert. The first time I had it (in 1995), I bought from someone selling it exactly this way. My roommate and I split a piece and we both came down seriously ill. Because it has cheese and is kept warm, you need to make sure you only buy a fresh piece. There are places to go where you know it will come right out of the oven. Anywhere else, stick with the baklava: 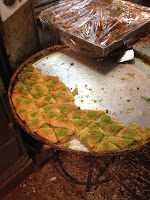 Around 11:30, I popped into Abu Shukry for an early lunch. They have some of the best hummus in the (though my father prefers hummus less smooth and with less lemon juice). 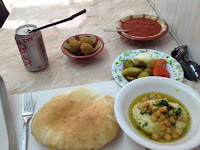 Afterwards, I bought some small trinkets as presents and then made my way slowly back towards the . 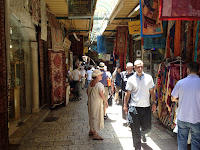 I went back to the Christ’s Church coffee shop for a slice of their carrot cake (which, in my opinion, is the best in the ). 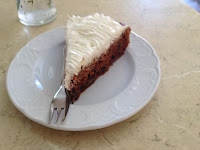 Then, after lots more water to drink, I began the hardest part of the day: the walk back to the hotel.

By now, the sun was directly overhead, so there was a lot less shade, and the temperature had risen to the low 90s (according to the paper, this “unseasonably warm” weather will continue into next week). I figured the best thing to do was to get it over with fast and head down into hell. On the bright side (and in all that sun, there was only a bright side), it took half the time as going via Mamilla.

Nonetheless, I was feeling pretty over heated by the time I reached Baka. I had been making sure to drink water every 30 minutes, but the heat was getting to me. By the time I reached the hotel, my shirt was soaked through fully all the way around. I went upstairs, took a shower, and then took a nap.

I came downstairs about two hours ago to finish my draft article on children and the Holocaust that’s due at the end of the month and sent it off to a colleague to review. I’m also making lists of what I need to see at the Yad Vashem archives in the morning and I’m toying with the idea of heading over to the Central Zionist Archives in the afternoon to look at a few files there.

I’ll go to the tonight for dinner, but I’m not leaving here until after 7 pm, when it cools off. It’s a nearly 45 minute walk and I don’t want to arrive dripping from sweat. There are two soccer games tonight, both at 9:45 pm, so I’ll walk back to the café in Baka not that far from the hotel and see which game they have on.