Another beautiful day here in Barcelona. I woke up this morning to clear skies, warm, but-not-yet hot temperatures, and no humidity.

I think I´ve figured out some of the problems I´ve been having posting photos to blogger and facebook, and I managed to get all the ones I´ve been missing up in this post.

Here´s the surprise photo I took of my colleague Marie and myself the other day when I bumped into her as I left the internet cafe. She´s an accomplished photographer, as well as an historian, and she gave me pointers on how to take a better photo of myself with my iPhone. 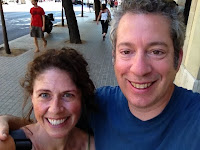 I also wanted to give you all a sense of what our apartment in Barcelona looks like. Here´s a shot of the kids at the breakfast table. 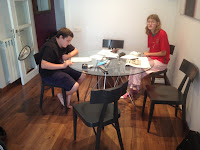 We are staying about two blocks from the Girona metro stop. There´s a beautiful flower and plant market just a few blocks away. 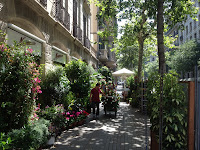 I´ve been thinking a lot about Barcelona as a city, and in some ways it reminds me a little of Paris. It´s because in the region we´re in, all the buildings are roughly the same height (5'6 stories), in the same style (late 19th century with lots of wrought iron), and the streets have broad sidewalks lined with trees. While the building style is different from Paris, they are similar in the common neighborhood feel.

For some reason, I wasn´t able to post this photo of the Sagrada Familia that I took the other night when Matt and I went to see it at dusk. 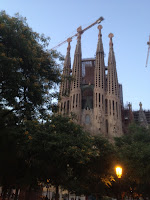 Yesterday evening, we had tickets to a flamenco performance at the Palau de Musica Catalan. We went back to Divinus, where I decided to get the chicken and veal paella. It was excellent. Matt was a little concerned when they only brought a single dish of that paella (mom got one without veal, Shayna had the vegetarian), but the waiter explained that they had simply combined the two chicken and veal paellas into a single dish, and gave us plates to divide it.

Afterwards, they took a taxi to the theater while I took the 15-minute walk. The area around the theater is called the Ciutat Vella, or old city. Lots of narrow lanes with small bars and shops, with people hanging out their laundry. 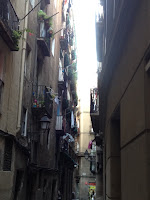 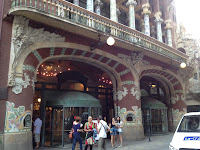 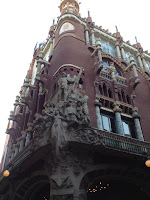 The interior is even more elaborate: 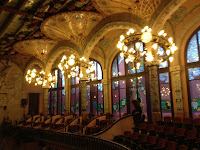 Dad and Matt misread their tickets and thought they were on the first floor. In fact, we were one floor above. We were in the first row and the views were fantastic. 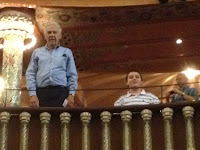 The ceiling of the theater: 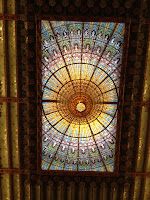 The performance was flamenco music, with a septet of musicians, one traditional singer, two operatic singers, and two flamenco dancers. The music was exceptional, though I was a little too tired to fully enjoy it. Shayna and my father loved it. Matt was a little bored.
Afterwards, I decided to walk back rather than try to squeeze five people into a cab. A block from the theater, I saw the entrance to the metro and thought "why not?" The metro only stops two blocks from the apartment. 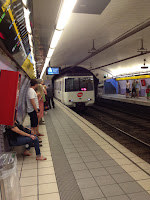 I figured they would be surprised that I arrived so quickly, but they were all caught up in other things.
Partly because it was a late night, partly because we were going to the beach the next day, my mother told the kids there would be no set wake up time in the morning. Both kids were overjoyed. I woke up at my usual time of 7:30 and read my email, and then showered. Around 8:30, I headed out to the market to stock up on necessities (like orange and apple juice) and also rolls and coffee.
On the way back, I passed a demonstration. About two dozen protesters carrying a large banner and small signs, blocked the entire street to traffic. From what I could make out, they were protesting cuts in social services due to the austerity plans. Then it was back to the apartment where there were intimations of stirring.
The plan for today was to go to the beach. Barceloneta is the closest beach and it has been very well ranked. By 10 am, all the kids were up and after Matt and I watched some Tom Lehrer and Monty Python skits, we left for the beach. The metro ride was only four stops and direct. The closest stop to the beach is at the harbor; from there, it´s a 15-minute walk. If you wanted an umbrella to sit under, it was 6 Euros; if you wanted a lounge chair to sit on, it was another 6 Euros. I suggested to my father to get the two umbrellas next to each other, but when I got back from buying a sandwich for lunch, I found he had only reserved one umbrella and no chairs.
I knew that wouldn´t be enough, so I sat under the other umbrella and waited for the guy. He eventually came and I told him I wanted that umbrella and a chair. He was temporarily out of chairs (I was 3rd on the wait list), but he could rent me the umbrella then. Matt wanted to go swimming, but I told him I wouldn´t go until I had my chair. In the meantime, my mother decided to get a chair as well.
10 minutes later, we were all set. Matt and I went swimming, while Shayna and my mother sat on the chairs and my father walked. I think Shayna was a little put off by all the women who were bathing and tanning topless. The water was clear and warm, though too calm for Matt´s (and Shayna´s) tastes. Matt and I played catch with a water ball. After a while, we played a game where he pretended to be a goalie and I had to throw the ball past him. We played that for quite a while.
After about an hour, we came out (after I promised Matt I would go back in later), and Matt, Shayna and my mother went to the grocery store to buy sandwiches. After they were done, Matt and I went back into the water. Matt asked me if I thought Shayna would come in, and after a lot of pestering I said that I thought that she would wade into the water, but not swim. In fact, that is what she eventually did, wadingup to her waist.
Around 4 pm, we all were out of the water, and changed into our street clothes to head back to the apartment. They are all showering and napping now. I´m not sure what our plans are for tonight (other than watching the big Spain v Portugal game, starting at 8:45 pm, hour time).
Posted by J.B. at 1:04 AM