Friday morning I packed my knapsack and took the bus to Tel-Aviv.

Here's the billboard in front of Ofer's apartment on Rabin Square: 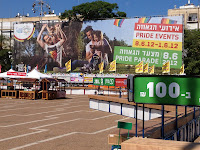 I had no trouble getting to Ofer’s place and we had plenty of time to chat before we headed out to the parade. 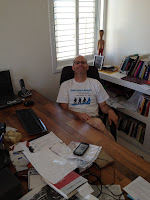 Ofer needed to pick up his three-year old son, Yanai, from gan (day care), so he arranged for his friend Arik to do it and meet us at Gan Meir, where the parade was supposed to begin. After some confusion, we finally met up with them, though Yanai was sound asleep by this point. 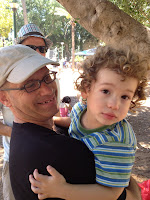 While this is officially the Tel-Aviv pride parade, and while some other cities (most notably ) have their own events, Tel-Aviv pride is the biggest and has the feel of a national pride day. There are several big differences between pride parades in the States and in . First, there are a lot more marchers than watchers. Basically, everyone marches. Second, I would guess at least half the participants are straight. Lots of young secular families with kids. Yanai was by no means the only toddler there. 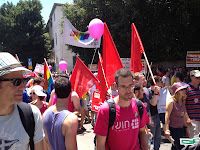 The march took place under a clear, blue sky and it was rather warm (though thankfully not yet humid). I made sure to buy half liters of water every now and then (“mayim karim! Mayim karim! Rak 5 shekel! – Cold water! Cold water! Only 5 shekels – it wasn’t cold, but it was wet). 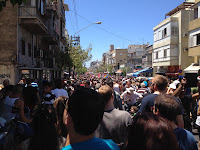 And then behind us, back towards the starting point of the march: 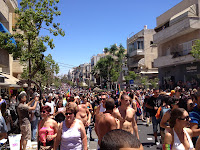 Yanai loves helicopters (and dump trucks and tractors), so Ofer was pointing out a helicopter to him: 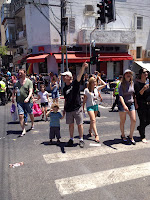 After about 45 minute, Yanai got very tired, so Ofer took him home, and I continued the march with his friends Arik (a movie producer, whose newest film, All the Happy Mornings, I’m hoping to see at the Jerusalem Cinemateque in a week) and Yoav (a photographer with the newspaper Yediot Ahranot). 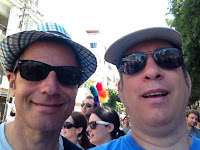 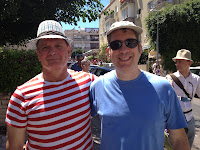 Before the parade reached the beach, it turned north on Ben Yehuda. 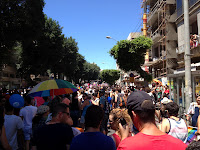 Here’s where things really slowed down. There were several trucks playing music in the middle of the street, and the parade had to make its way around them. 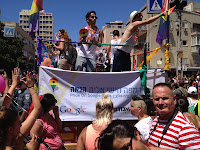 I think all of us were ready to bail at that point. We skipped the final section to and left the parade to get a late lunch at Shine.

We all had a very nice chat (in Hebrew, of course), though I found Yoav someone hard to understand as he mumbled slightly. Arik told me about his film and we chatted with people they knew who were walking by. This is what I love about living in a city where you don’t need a car and everyone walks. Around 4 pm, we said our goodbyes and headed back to Ofer’s place, where he and Yanai were sound asleep. They soon woke up and Yanai’s mother Gil came by to pick him up. I shared the photos I had taken and Yanai did the classic three-year old’s response to questions: he shrugged. When I saw him doing this earlier I asked Arik what the verb “to shrug” was in Hebrew. He didn’t know, but he suggested “limshokh et hak’tnafayim,” literally, to pull the shoulders.

After they left, Ofer need to make a quick trip up to Herzelia, so I decided to check out the beach party now that it was a little cooler.

The Tayelet at Gordon Beach: 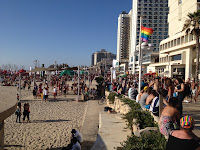 People were already leaving the beach, but I had time to check out the stage and the dancing, but I really shouldn’t have been in shoes to enjoy it. After that, I headed back to Ofer’s place. On the way, I passed the Betty White café, whose name I found highly amusing. 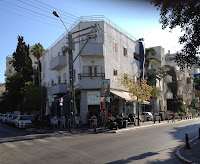 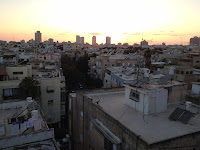 I took a shower and finished my book. When Ofer got back we went to a neighborhood sea food restaurant he highly recommended. There was quite a crowd, but we didn’t have to wait too long. The first table that was available was far larger than we needed, so Ofer invited a group of Chileans who were also waiting to join us. One turned out to be in the Chilean foreign service and was stationed at their embassy. There was also his partner and a friend of theirs who was visiting. We ended up having a rather complicated conversation in both English and Spanish, since Ofer couldn’t speak Spanish, none of the Chileans could speak Hebrew, and one of them couldn’t speak English. In any case, the food was good, and the conversation, while somewhat complicated was interesting.

This morning, I managed to sleep until nearly 8 am (though I did have a work-related nightmare that made me feel I was back in graduate school). Ofer was heading to his parents’ for brunch and I decided to head back to . Even though the buses are shut down in on Shabbat this was not much of a problem. I took a private van to the central bus station and then a sherut (a shared taxi) to . I figured it would leave me off at the Central Bus Station and then I would walk all the way across the city to where I’m staying, but instead, I got off at the Damascus Gate.

I love spending Shabbat in the , and I made my way to the Christ’s Church guesthouse and café for an American-style buffet lunch of chicken and mushrooms, rice, mixed veggies, and chips (which is always pronounced “cheeps” in ). Then it was a half hour or more walk back to my hotel. I may take a short nap now and then head to Emek Refaim for a late afternoon coffee. Tomorrow is back to work.