The last few days have evoked a lot of strong emotions.  On Wednesday, we visited the new Jewish Museum in Warsaw and saw the fragments of the Warsaw Ghetto wall. On Thursday, we began with the Museum of the Warsaw 'Rising, about the 1944 revolt that led to the deaths of 200,000 Varsovians and the utter destruction of the city.  Today, we came to Lublin and visited the hybrid death camp/concentration camp known as Majdanek.  Tomorrow, we head three hours south to the site of the Belzec Death Camp.  This has been a rough few days.

Although the Museum of the Warsaw 'Rising is more than a little confusing in its arrangements (several students toured in reverse order not realizing that had to take the elevator hidden behind a corner), most of the students liked its immersive aspect and felt that the confusion contributed to the chaos of the 'Rising. 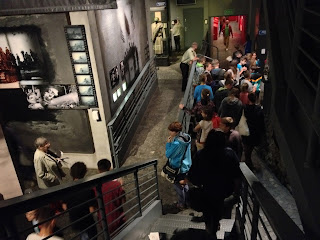 This is the fifth time I've been in the museum, but the students discovered there are narrow tunnels beneath the entry level that I've never seen.

The 3D movie that uses computer animation to show what destroyed Warsaw looked like in the spring of 1945 after the Soviets liberated its rubble is very effective.  I noticed many Poles walking out of it crying, seeing their capital city (since reconstructed) as a pile of ruins.  The former Warsaw Ghetto is noticeable as there, the destruction was total:  not even broken walls remained.

From the 'Rising Museum, I wanted to head up to see two Ghetto monuments.  I ended up getting turned around, so we went to the Umschlagplatz first, and the the monument at Miła 18, where the main ghetto bunker stood.  We talked about resistance, how hard that was, and also the issues surrounding rescue and collaboration.

By now it was after 1 pm and we were all tired and exhausted.  To make things simple, I decided to pick up the tab for lunch and took them all to Zapiecek, a rather kitschy pierogie chain restaurant.  I thought it was a good chance to introduce them to Polish food in a safe environment.
The students all seemed to enjoy it, and several are now looking for more chances to eat pierogies. 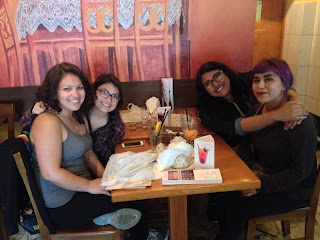 I went for the sausage and fried onion. 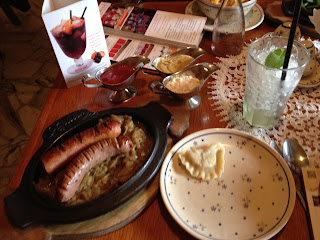 After we were all rested and had used the bathrooms, we headed off to the reconstructed Stare Miasto and Old Town Square.  There were lots of opportunities for souvenir shopping here, and I pointed out some good places to buy amber.  Still, it's more than a little disturbing to see vaguely anti-Semitic toys for sale: 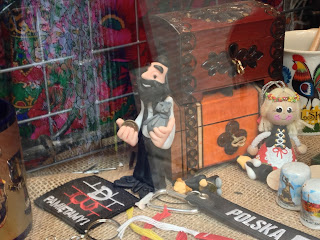 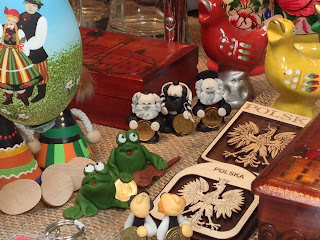 Two years ago, the "Jewish"-style restaurant we ate at in Łodz gave us these rabbis holding coins as a present for coming.

All over Warsaw, you can still see traces of the horrific conflict that destroyed the city.  Most of this building was reconstructed, but one could still see bullet scars on the parts that survived. 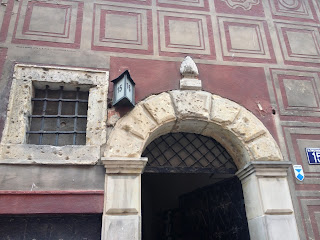 We made our way past Warsaw Castle, down a street full of famous cathedrals, shrines to Chopin, and fancy boutiques and cafes.  Just off the main street, however, lies a warren of dive bars known as "the Pavillion."  It also has this really cool mural. 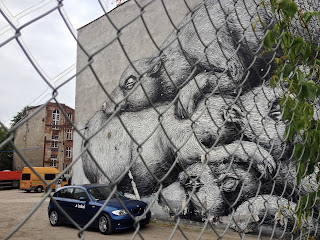 Several of the students went back last night.  Most loved it, but one was very uncomfortable by the aggressiveness of some of the sketchy men there.

I went off to the bane of my existence:  the train ticket booths at Warszawa Centralna station: 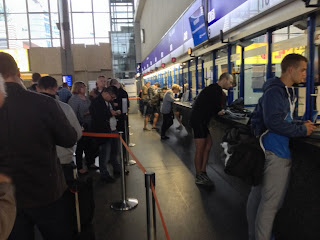 When it was my turn, I approached the window.

Me [in Polish]:  Hello.  Please forgive me, I do not speak Polish.  Does madam speak English?
Clerk [in English]:  No.  Just little.
Me [In Polish]:  Tomorrow, please.  Train to Lublin [pointing at schedule].  14 ticket please.  With reservation.  Two class.
Clerk [in Polish]:  mwah mwah credit card?
Me [in Polish]:  Yes!  Yes!  Credit card.

She then printed out the tickets.  I wished I had looked at them in detail then; it would have saved me some grief today on the train.  She broke our group of fourteen into three groups:  six, six, and two.  The first two groups of six were in Wagon 14; the last group of two was in Wagon 12.  That led to a lot of chaos this morning.

I decided to find a nice place to eat for dinner, so I headed to a neighborhood I had had good luck in before.  One restaurant there, Ole Tapas, was in the guidebook as very good, so I decided to try it.  It's a steak place, so they brought out a selection of steaks for me to choose from.  I decided to try the local Polish "limousine" cow, along with some grilled asparagus and a glass of a nice Rioja. 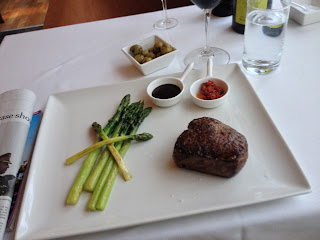 The steak was excellent and prepared just right.

They had two desserts on the menu:  a Spanish-style creme brulee, or a fruit tart.  I asked what fruit, and the waiter said peach.  It also came with bison-grass flavored ice cream.  Like Zubrowka, I asked? Yes, he said.  I ordered that. 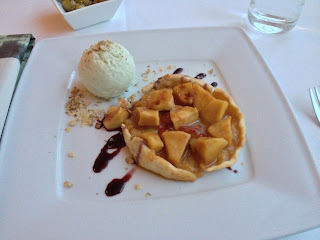 The tart was perfectly prepared.  The crust was very flaky and buttery, while the peaches were firm and good.  An excellent dessert.  As for the ice cream, it was sweet and cold, but otherwise had no discernible flavor.

I was so tired yesterday that I tried to go to bed early, and then pack up everything this morning.  I slept nearly 8 hours, but was still feeling tired when I got up.  I headed down around 7:15 am for breakfast.  The hotel does have a lovely breakfast buffet; the students are going to miss it. 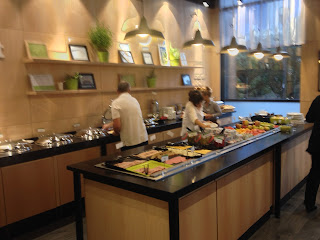 After hearing about some of their adventures last night, we headed back to Warszawa Centralna to catch our train to Lublin. 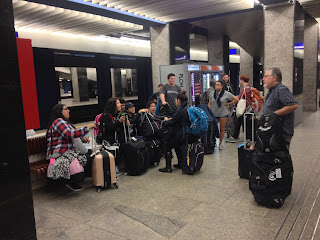 Ah the joys of Polish regional rail.  Cramped carriages (8 to a cabin, as opposed to 6 everywhere else), smaller overhead compartments, and less air.  It's like flying coach. 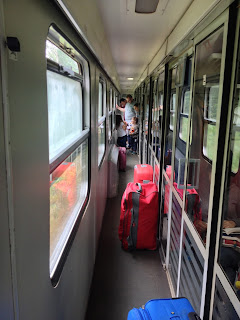 And just to make sure we got to really enjoy it, our train was delayed en route by nearly an hour.  As a result, we arrived in Lublin at noon, rather than around 11 am.  After buying our three-day metro passes, I then had to find our bus to take us to near our hotel.

I had gone online this morning to confirm the bus route.  The city's website said take bus #34 from the main railway station to Al. Solidarnosci, getting off at Lubomelska 2.  There's just one problem:  according to the official posted route for line #34, it doesn't make that stop. After running back and forth across the road in the rain with all our luggage, I asked the driver if he stops at Al. Solidarnosci.  He said yes.  I told all the students to get on the bus.

Now that it was raining, but buses windows steamed up, so that made it even harder to see where we were going.  With the help of a passenger on the bus, we actually got off at the right stop, and we could even see our hotel in the distance from the stop.  From there it was just a short walk to it.

Even though we were early (we arrived around 1:00 pm), they let us check into the rooms.  I urged the students just to drop off their stuff in their rooms and meet me in the lobby to go get lunch.  We walked 15 minutes to the late medieval and renaissance era Old City, where we had lunch.

I went back to a place that specialized in buckwheat crepes and ordered their "Old Polish" version.  The other students got either savory or sweet crepes. 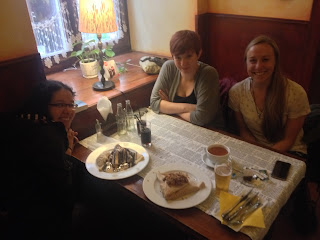 After lunch, we took the tram to Majdanek.  This camp always shocks the students, for a variety of reasons.  First, it's right up against the city.  It's natural to assume that the Nazis hid places like this away from public view, but the camp could be seen, and smelt, for miles around.  In fact, as we sat by the giant urn holding over one ton of human remains, church bells could clearly be heard echoing through the camp, which affected some of the students quite strongly. 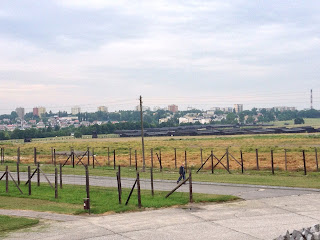 Some of the students felt claustrophobic, as if they would not be able to escape from the camp.  Others wondered how the people nearby could go about their daily lives while their fellow human beings were trapped behind these barbed wire fences.  Another wondered why we are so passive today in the face of evil.

Because of our late arrival, we had less time in the camp than I had hoped and we were quite rushed.  Arriving at 3:30, I discovered the exhibition spaces close between 4:30 and 5:00, while the camp grounds close at 6:00 pm.

There's a new museum in Majdanek about the lives of prisoners in the camp that opened last year on the 70th anniversary of its liberation by Soviet troops, and it's very, very good.  Among the items on display was this illustration from a manual for guards on appropriate and inappropriate ways for prisoners to behave when being unloaded from trains. 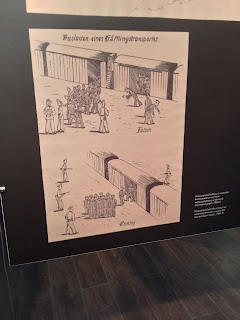 This one shows the correct and incorrect ways that prisoners should be marched. 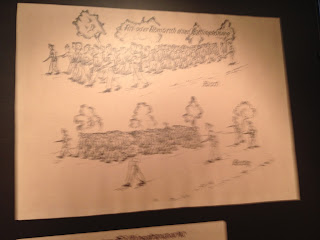 I managed to get them to the crematorium before they closed it, and then we sat for over 10 minutes in silence as I let them process what they had seen.  We then discussed the camp, but I needed to make sure we got to the main gate by 6:00 pm.  We just made it (it's quite easy to hop the fence, but I wanted to avoid that).  We were all very somber going back to Lublin.

At least our neighborhood is nice.  This is the street we walk down to get from our hotel to the old city center and back. 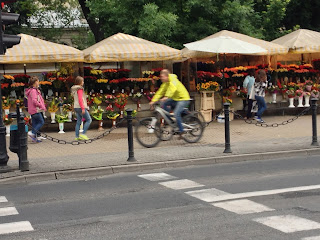 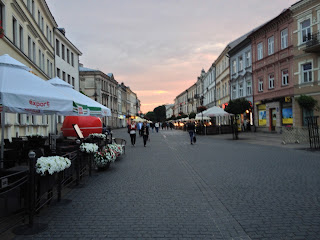 I needed a nice dinner after such a long and difficult day.  I settled on a cafe by the Krakow Gate and ordered their chicken breast with asparagus, cut to resemble tagliatelle noodles. 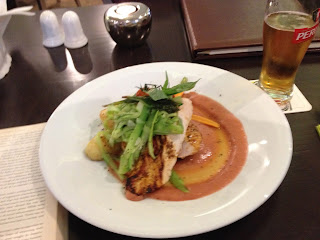 I also ordered a dessert.  In retrospect, I should have tried their halvah cake, but when he mentioned szarlotka, I couldn't resist ordering it. 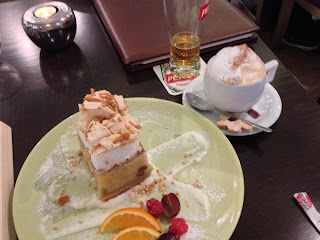 The meringue on top was a good idea; I really enjoyed it.  The apple cake, on the other hand, tasted a bit odd. It might have been because it was warm, and I think szarlotka tastes best cold, or perhaps it was because the apples tasted overcooked, with a consistency approaching apple sauce than apple pie.  It wasn't bad, but it wasn't great.

Did some laundry tonight and it's now hanging up to dry. Tomorrow we can sleep in a little bit later (we leave at 9 am rather than 8:15), but tomorrow will also be a very hard day emotionally, as we are going to Belzec.
Posted by J.B. at 2:22 PM