How to Tell the Story

One of the biggest problems in telling the story of the Holocaust is our general bias in history towards telling the story of people who act, rather than those who are acted upon.  In the case of the Holocaust, though, this is leads to a silencing of the victims and a focus only on the actions of the perpetrators.  Today, we saw that issue close up in a series of museums and memorials.

First up this morning was the House of the Wannsee Conference in the very southwest corner of the city, in a beautiful villa on the shores of Lake Wannsee.  It's always disconcerting how such evil actions could have taken place in such a lovely space.

The museum tells the story of the Nazi genocide, tracing it from the rise of anti-Semitism to Nazi anti-Jewish policies, culminating in the decision, made mostly likely in October 1941, to extend the murder of Jews from the western Soviet Union to all of Nazi-occupied Europe.  The conference held in Wannsee in January 1942, was on how to implement this decision across the bureaucracy. 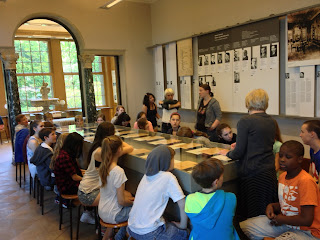 [German school children in the room where the conference was held]

While the museum does its best to bring in the voices of various victims, and several students commented on how moved they were by the stories, the museum's focus understandably remains on the decisions made by the Nazi leadership.

We took our lunch break near the Wannsee S-Bahn station.  This is the third time I've had lunch here and for the first time, I think I found something decent to eat.  A Polish couple has opened a bakery/cafe at one end, so I had the Vollkornbrot sandwich (this is a very dense whole grain meal bread).  It was pretty good. 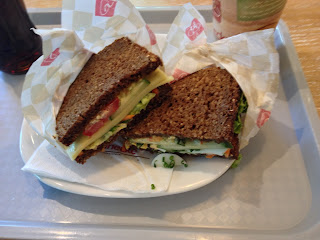 Afterwards we headed up to the Brandenburg Gate. 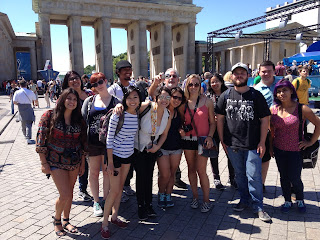 The whole area is swarming with fans for tomorrow's Uefa final cup match between Juventus (Italy) and Barcelona (Spain).  I think we're seeing more fans of the latter, but it's definitely not the lopsided numbers we saw last weekend.  A very hot day, too; definitely shorts weather.  We had a high of 35 C (95 F).  Perhaps it may be a little cooler tomorrow.

Our next stop was the Memorial to the Murdered Jews of Europe and the Information Center underneath it.  This memorial takes the opposite approach as the one in Wannsee.  While the above-ground section, with its long rows of undulating plinths, presented a very abstract approach, the information center focused almost exclusively on the experiences of individual victims.  Many of the students were profoundly moved by the presentation.

Because of the game tomorrow, the eastern part of the Tiergarten, including the memorials to the persecutions of the Roma, Sinti, and Homosexuals, were closed off from public access (no one can explain why).  As a result, we went to the new (opened September 2014) memorial to the sterilization and murder of the disabled.  Located on the site of the former headquarters of the T-4 Program (behind what is now the Berlin Philharmonic, this small but dramatic site highlights the persecution of the disabled.  Each text is actually written three times:  once in German, once in English, and once in a simple German that someone with limited abilities could understand. 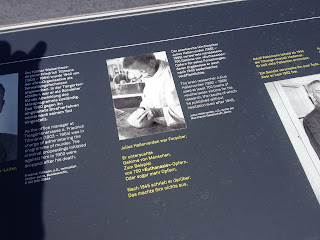 By that point it was getting late and we were all rather hot and tired.  We made our way on a very crowded and sticky U-bahn to get to Nollendorfplatz.  Then we walked a short way to Café Einstein Stammhaus.  I hoped to sit out in the garden, but it was 6 pm when we got there and the tables were already reserved for dinner.  Instead we sat inside as I told the students I would buy them one non-alcoholic drink and one dessert.  I chose a Melange (a Viennese cappuccino) and a Erdbeerschnitte. 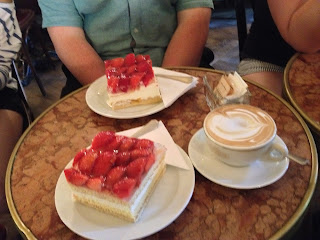 This had a bottom layer of shortbread cake, followed by a layer of whipped cream mixed with custard, and then topped with a sponge biscuit cake and then a layer of fresh strawberries.  It definitely tasted as good as it looked.  Some students got the Apfelstrudel, while others tried it with apricots.  Still others ordered the Black Forest Cake.  I don't think anyone left disappointed. 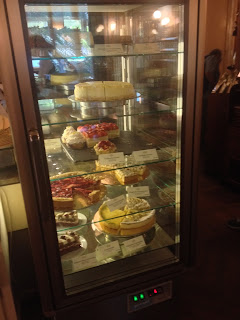 It was still hot and light out when we started to make our way home.  Several of the students want game paraphernalia, so they went off to Zoo Station; the rest went with me back to the hostel.  It's 11:30 pm, and still pretty warm out. I'm hoping it cools off a bit (it should cool off a lot by Sunday).