One of the odd things about a Holocaust study tour is the juxtaposition of visiting sites of horror followed by normal tourist activities.   Today was in some ways a culmination of our visit to Berlin.  After visiting numerous memorials and museums around Berlin we headed about 45 minutes north to Oranienburg to visit the Sachsenhausen Concentration Camp.  The weather was a little bit cooler than yesterday (31 as opposed to 35), but we were walking outdoors for a lot of it.

Sachsenhausen was a second generation camp, opened in 1936, and the model for subsequent camps.  As with many other places we have visited, there simply isn't enough time to see close to everything.  Among other things, you can get burned out by the horror of it all.  We saw the main gate house, the so-called Jewish barracks, where Jews arrested during the November Pogrom (aka Kristallnacht) were brought in 1938, and the prison compound (this was a prison within the concentration camp for those who broke camp rules).  Afterwards we visited the East German memorial erected in the camp in 1958. 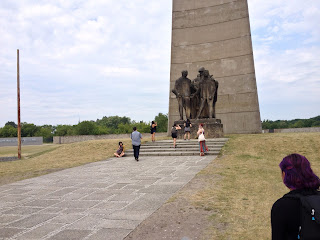 This was a good opportunity to discuss the peculiar aspects of communist memorial culture (in which the Soviet Union and its freedom-loving allies were the primary victims of fascism).

Afterwards we went to the execution site and the remnants of the crematoria.  By now we were getting rather hot and tired, so we did a quick stop at the pathology/mortuary buildings, opposite the hospital block and then headed back to catch the train back to Berlin.  Altogether, I think we spent about two hours in the camp.

This was it for today.   The students have the rest of the day off; we don't meet again until tomorrow morning when we leave at 8:15 sharp for the train station.  I told them I was prepared to leave them behind if they weren't out of their rooms and have returned their keys.  And I was serious.  I won't jeopardize the train tickets for everyone for one laggard.

The city is now swarming with masses of tourists for tonight's big final game of the Uefa (Union of European Football Associations) tournament, with Juventus (from Turin, Italy) facing off against Barcelona.  Pretty even mix, but all the Colombians we've met have been rooting for Juventus. I asked one why and she said that many of the Colombians support Real Madrid (Barcelona's rival).

We stopped by for some chocolate shopping at Fassbender & Rausch, and again, it is this disconnect between the morning's horror and the afternoon's tourist fun. 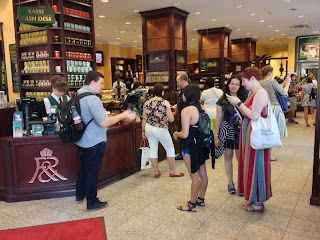 It's not exactly cognitive dissonance, but it does require a degree of compartmentalization.

Some students wanted big game sports paraphernalia, so we headed to the superstore at the Brandenburger Tor.  Along the way we passed many cheering fans.  Luckily, there did not seem to be much animosity between the two sides.

Afterwards, we were just dying from heat and thirst, so we ended up in a restaurant near Friederichstraße Station.  It wasn't the best choice, but we didn't have many options.  An ok meal with mediocre service in a rather warm and sticky place.

Everyone is not getting excited about the big game about to start.  Time to put the computer away and go watch.
Posted by J.B. at 12:43 PM