On Sunday we headed down to Dresden after checking out of our hotel in Berlin.  I was curious to see how the students would react to the differences between the cities.  Several told me that they much preferred Dresden:  the streets were cleaner, the stores seemed more upscale (we were staying in the Altstadt), the people seemed better dressed, and the buildings nicer.

One question that I think half the students have asked me independently is which city on the trip is my favorite.  I tell them that if I had to choose a city to live in it would be Berlin.  I love its cosmopolitan vibe, its diverse population, the street art and creative graffiti, the everyday shops, and the way the city is designed for public transportation and bicycles.

I wasn't happy with our hotel (at first).   We arrived early (around 11), but we were informed that the luggage room was full.  Where I are we supposed to store our luggage until we can check in, I asked.  He shrugged.  I kept insisting until he decided we could store our luggage in the handicapped bathroom on the first floor (which was normally kept locked).

That taken care of, we walked to the historic center of Dresden so I could start making arrangements for our excursions of the day.  As we passed the Residenzschloß (the former palace of the kings of Saxony), we hear a loud bang.  Then we saw people dressed up as early 19th century soldiers, firing their guns into the air, while others moved on horseback. 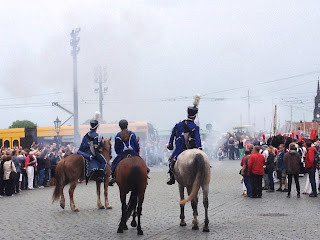 It was confusing at first, to find out what was going on, but we happened on a very unusual event.  During the Napoleonic Wars, the king of Saxony sided with Napoleon and was rewarded with additional territories.  After Napoleon's defeat, however, the king of Saxony was taken prisoner by Prussia and held in prison.  200 years ago in 1815, the Saxon king was allowed to return to Saxony.  This 200th anniversary celebration was commemorating the event.

I went to buy the tickets for our afternoon river cruise but they wouldn't sell them to me:  the Elbe River is extremely low (just 84 centimeters) and they weren't sure the afternoon sail would take place.  I then had lunch in the Schinkelwache cafe and afterwards we all went in to see the New Green Vault. 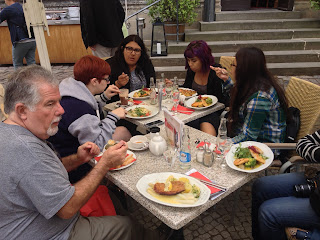 This is basically the tchochke collection of the kings of Saxony.  Lots of gold, silver, precious gems, ungepotchke household items, all over the top in ostentatiousness. They were pretty strict about their no photo policy, so there was no chance to show you any examples of the amazing silver and gold depiction of the birthday of the moghul emperor, or the silver and gold coffee set, or the giant green diamond surrounded by regular white diamonds.  All I could manage was this shot of the porcelain collection. 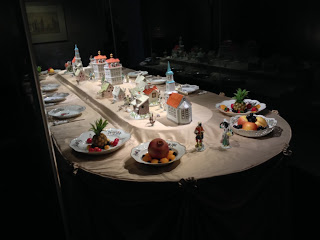 Some of the students went through the exhibit really quickly (they were overwhelmed by the gold, they gold me), so went on to see the Turkish Chamber upstairs.  We met up around 2:45 and headed back to the dock to see if the ships were sailing. Success!

There weren't any seats left on the railing, but there were still plenty on the top deck.  Enough to get a good view of the surroundings on both sides. 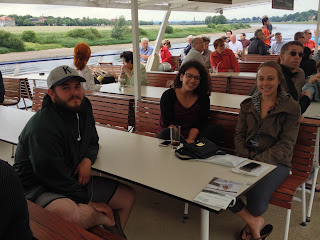 After a relaxing hour and half on the river, we headed back to Dresden Altstadt; as we arrived, the church bells were tolling.

Back at the hotel we checked in and the students (and I) discovered that we only had one hour of free Wifi (in the lobby).  Lots of grumbling.  This is what is known as a "first-world problem."  Students went to take naps (many had been up quite late celebrating the soccer finals the night before).  We met up around 7 to go to a reasonably priced traditional restaurant near the rebuilt and restored Frauenkirche. 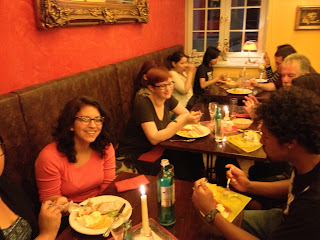 I decided to go with the sauerbraten, but it was just too much for me:  too much food, a little too dry and I just couldn't finish it.  I skipped dessert, but the students couldn't pass it up.

The hotel where we stayed was built at the end of the reign of the East Germany communist party, so the exterior has that charm-free Soviet bloc look.  Luckily, the rooms are very well appointed and comfortable.  The students were very happy with them, and with the buffet breakfast this morning that included eggs and bacon.

The train to Prague was uneventful, but we had some difficulty getting off the train and some people on the platform wanted to board.  I kept trying to keep the path clear so the students could get off, but one man yelled at me (in a Scottish accent) to stop pushing him out of the way (I ignored him).  I also had trouble getting either of my bank cards to work, so I changed some dollars at a bank in the train station, and then got our passes and made our way to the hotel.

We're staying at the I. P. Pavlova metro stop, named after Ivan P. Pavlov, the Russian scientist who trained dogs to salivate at the sound of a bell.  Our mnemonic for remembering our stop is "Pavlov's dogs." 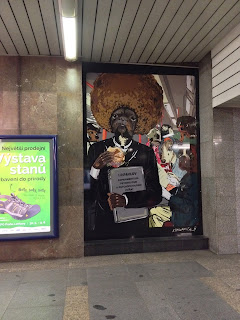 I've had a string of bad luck at hotels in Prague, but I'm very hopeful that this one will finally be good.  The staff was friendly and helpful and my room is great.  Large and clean.  Couldn't ask for more.

I did have to spend a lot of money today in cash (on the metro passes and later on the passes to the Jewish museum), so I went into a money changer to change some Euros.  I gave her 100 euros and she made an offer.  I noticed there was a fee:  28%!  I asked her about it and she said "it's on the board" (which it was).  I told her I wasn't interested in changing the money and I wanted my cash returned.  She then offered to negotiate the fee rate and I told her I wasn't interested.  I held my ground and with much muttering she (eventually) threw (!) back my money.

Unfortunately, one of the students had followed me in and when she saw me refuse to go along she demanded the same.  They wouldn't return her money.  I went over to her side and insisted.  They told me it was none of my business.  I threatened to call the police (she scoffed).   I again insisted.  She said that this was her client.  I told her she was my student.  Eventually she yelled an insult and threw the money at the student.  We left.

That was really the worst behavior of the day.  The rest was pretty good.  I took the students to the most beautiful cafe in the world (the Municipal House cafe next to the Powder Tower): 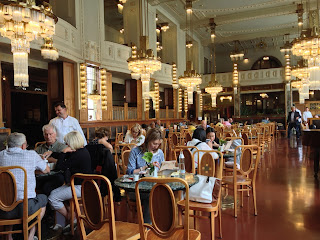 I told the students I would cover a (non-alcoholic) drink and a dessert.  They were very happy with their choices: 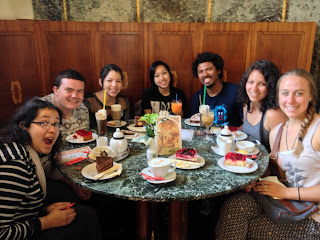 Afterwards we toured the various Jewish museums.  For the first time since I've been to them, no one was monitoring the taking of photos, so I was able to snap a few inside, like this beautiful dome in the Spanish Synagogue: 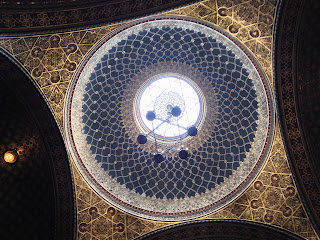 We ended the day exploring the Charles Bridge and then making our way back to the hotel.

I spent the early part of the evening doing logistics, and then went to get dinner in Nove Mesto at a "Czech-Mex" restaurant called Jama.  The steak fajitas were pretty good.  Now I'm back at the hotel ready to collapse.  I've set the alarm for the morning (we need to leave the hotel by 8:30 to get to Terezin), so I'm ready to see how comfortable the beds are.
Posted by J.B. at 2:18 PM

So glad I got to Prague just after the Velvet Revolution where it had mot yet been overrun with tourists and most of the shopkeepers were simply glad to have us spend money there. That and it was dirt cheap. The Moroccan restaurant we ate a fabulous meal at (near the clock tower) was so obscenely cheap we could hardly believe our eyes or our wallets. Still Prague is so incredibly gorgeous I'm sure you can forgive its minor faults these days?