Beginnings are always hard and yesterday was no different.  From early in the morning through late afternoon, I ran back and forth between the hostel and Berlin's various airports picking up the students as they arrived.  By the time I arrived at Tegel the second time, the students had already left the gate; I really got worried they my have left the airport, but it turned out that the suitcases of two of the students hadn't arrived.  Finally, by 5:00, the last student was off the plane.

After getting everyone checked into the hotel, thought it would be nice to treat all the students to a first dinner in Berlin.  I booked "Zum Schusterjunge," which is a very traditional, east Berlin restaurant, with a nicely priced menu (including Spargel!) and told the students I would cover all their food costs; they would only need to cover drinks. 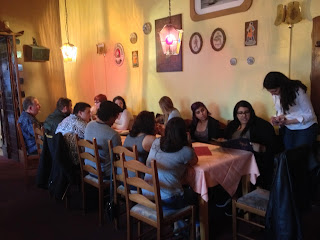 The long wait for drinks should have warned me, but I thought, after all, we're a very large group in a small restaurant, but they must have been very short staffed last night.  At least my Spargelkremsuppe was excellent: 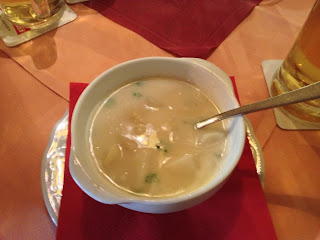 We had quite a wait for our main course and it did not come out simultaneously for everyone, but rather in stages.  Since I kept waiting for everyone else to be served, my schnitzel and spargel with hollandaise sauce was only somewhat warm by the time I started to eat it: 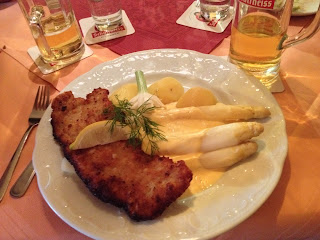 I think we waited over an hour for dessert and then only those who ordered Strudel were served.  I asked about the strawberry creme brulee special that half of us had ordered and the waitress was surprised and then said "a little bit."  15-20 minutes later we were served hot creme brulee with no sugar crust.  It was terrible.

This morning everyone made it to breakfast on time and we left for the Jewish Museum.  After checking in, we had about an hour before our scheduled tour.  I took the students into the basement level and we explored Liebeskind's axes of German Jewish history.  I asked them to choose one of the axis and explore it.  Some ended up on the axis of exile, which ended in the garden of exile: 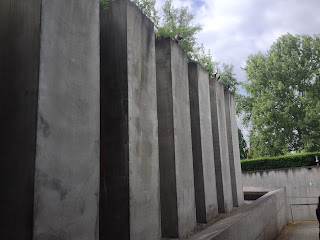 The trees are unreachable and the ground is hard, broken stones set at a slanting, disorienting angle. 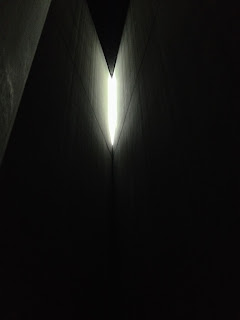 This is a dark room, lit only by a thin slit in the concrete and unadorned and unheated.

We had a little extra time, so we visited an amazing art installation, designed, in part, by the director, Peter Greenaway.  It was called "Obedience" and focused on the binding of Isaac in the Jewish, Christian, and Muslim traditions. Created by Saskia Bodekke (a media artist) and Peter Greenaway (a fascinating British film director), the rooms explore different aspects of the story of Abraham's obedience to the God's call to sacrifice his son.  One room had a dozen books, some over 1000 years old, from Jewish, Christian, and Muslim sources, all open to the page of the attempted sacrifice.

One room dealt with Satan (who does appear in some midrashim of this story).  The floor consists of stones lit with a red light.  On one wall, there was a computer screen.  I realized later, the video wasn't running but at first I thought they were suggesting that Bill Gates was the devil: 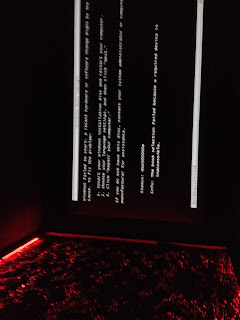 Other rooms focused on the banishment of Hagar or the fate of the ram.  The concluding room asked "or are you an Abraham?"

We met our guide without any difficulty.  I had booked the tour on Jewish responses to the rise of Nazism, but I wasn't entirely sure what it would cover.  We started on the Axis of Exile, and I worried that it would duplicate our earlier look, but thankfully, he elaborated on some great material on display and I think it worked out quite well.  Afterwards, we went up into the main exhibit and looked at early responses to the Boycott (April 1, 1933), and then the effort of Jews to flee Germany following the November Pogrom (aka Kristallnacht).  The tour ended with the students clustered around a table as the guide charted the various paths Jews took to countries of refuge: 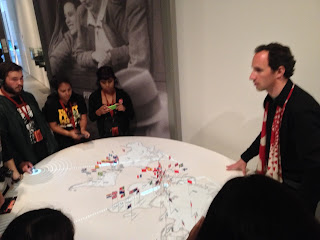 We ended up spending close to 2.5 hours in the museum, though the students only saw a very small portion of the main exhibit.  Afterwards, we walked through Kreuzberg and made our way to Mustafa's Gemüse Kebap, which has some of the best street food in Berlin: 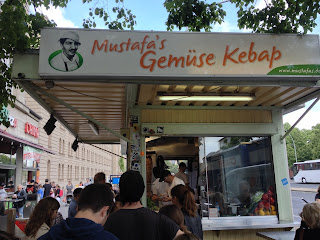 The mostly sell chicken dönör (the Turkish version of schwarma) with lots of salad, cheese, and herbs, inside not pita, but what looked like really large hamburger buns.  It's also vegetarian friendly.  I think the students really liked it.

After that we headed back to the hotel for a short break.  To the relief of two of the students, their missing luggage had finally arrived.  Around 3:45 we started our walking tour of our neighborhood: the Scheunenviertel.  I had a couple of reasons of doing it.  First, I wanted them to get to know where we are staying and some of the stuff in the neighborhood, if they want to check it out later.   Mostly, though, what I had done was make laminated copies of an art installation done her almost 25 years ago by the artist Shimon Attie.  Right after the Wall came down, he visited Berlin and found old photos of this neighborhood, which used to be the immigrant Jewish neighborhood.  Then at night, he took a slide projector and projected the original photo on the site where it was taken.

The effect is astonishing:  ghost images from the 1920s now appearing on the post-war, post-communist ruins of east Berlin.  Attie has talked about how he walked around Berlin seeing ghosts and how this exhibit was his way of making others see all the ghosts he was  being haunted by.

We ended up by the Volksbühne in Rosa-Luxemburg Platz, where we shared out their reactions to Attie's project.  We also had a nice discussion about how Berlin has changed since the fall of the Wall and whether gentrification is a good or bad thing.  From here, I just quickly took them over to the Karl-Liebknecht Haus, former headquarters of the German Communist Party and now the center of the Left, in case they wanted to do some shopping in the book store.

That was it for the formal program of the day.  Some students went off on their own (yay!); the rest I said I would guide back to the hostel.  We went to the bus stop and waited; our bus was supposed to come in 10 minutes.  It didn't.  20 minutes passed.  30 minutes passed.  40 minutes passed.  No bus.  Finally found out:  the president of Egypt is in Berlin and public protests have disrupted traffic.  We went back to the U-Bahn stop and took it to Alexanderplatz.  I told the students: here let me show you what the TV tower looks like from the base: 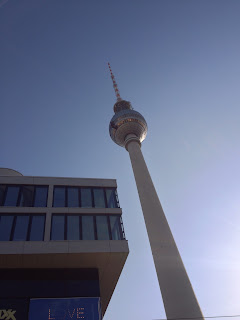 I had originally skipped going this way, since Alexanderplatz is such a large and labyrinthian station.  By the time we got back to the hostel it was 7 pm.  I went back to the anarchist Italian restaurant in Prenzl' Berg with a few of the students, and we sat outside in the increasingly windy evening enjoying the food.  On the way back, we saw some of the protests against gentrification: 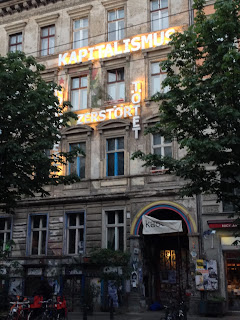 We were looking for a cafe to have a nachspeise, but all there were were restaurants.  We took the tram to Hackescher Markt, and there found a nice cafe that had desserts.  I had the almond and marzipan torte, which was absolutely delicious: 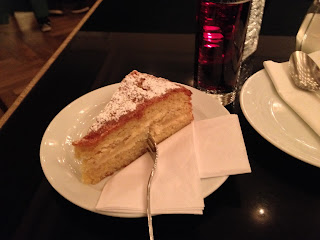 It wasn't too dense and had an amazingly intense almond flavor.  Normally, I would have ordered the Milchkaffee to drink, but with the jet lag I didn't want to risk having troubles falling asleep, so I got the black current fizzy juice.

Thankfully, I got a mostly good night's sleep last night, walking up first at 5:45, but then falling back asleep until 7 am.  I think I'm going to set the alarm tomorrow; not because I need it to wake up, but because one reason I woke up early was fear that I might oversleep breakfast.  With the sun up so early, I can't tell what time it is in the morning:  6 am looks just like 8 am.
Posted by J.B. at 11:34 PM