Yesterday was a very hard day; how could it be otherwise?  I warned the students in advance that our day Auschwitz, followed the next day by our trip to Birkenau would be very difficult.  Thankfully, there were no problems with our logistics.  Our driver showed up on time and where we expected him.

The drive to Auschwitz I Stammlager (primary camp) is just over an hour from Krakow.  When we arrived I handled all the arrangements. I'd hoped we could watch the English-language film, but if we did so we would miss our 10:30 guide.  I wasn't able to arrange a private guide, so we went with a larger group. 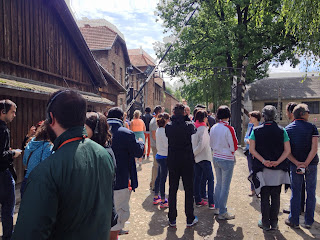 With our English-language guide, about to enter the Auschwitz I camp.

Many of the students told me afterwards how spoiled they felt now, having been at other, less-visited monuments, now that they were with a much larger group of tourists, with other large groups everywhere.  Many said they felt rushed.

The second building we visited was called "Material Proof of Nazi Crimes."  The first room we came to had a case of spectacles and a long wall of prosthetic limbs.  It was much worse upstairs as we came to the room of human hair.  This is probably the hardest room in Auschwitz I, as it has two tons of human hair on display (7 tons were recovered when the camp was liberated).  They also have rolls of felt made from human hair on display.

I can't look at the hair for more than a few seconds before I start to cry.  Several of the students told me they had to keep from throwing up.  Others went to the windows to get more air and said they felt trapped (exacerbated by having to wear headphones to hear the guide's voice). 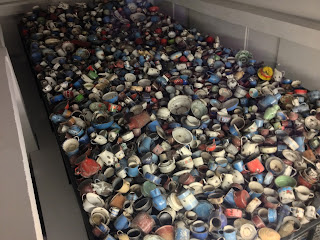 In a building full of horrifying and disturbing images, perhaps the least horrifying (yet still very awful).  Pots and pans stolen from those who were murdered.

I skipped Block 11, the punishment block, as it makes me very claustrophobic.  I waited outside while the students went in, and chatted with three Israelis waiting for their group.  The father of the older man, it turns out, was from Tomaszow Lubelski, the place we changed buses from Lublin on the way to to Bełżec.  His father would buy grain from local farmers and sell it to the flour mill in Bełżec before the war.  In 1939, they fled east to the Russian zone and then he was deported to Siberia by Stalin, and so survived.

When the students came out, we saw the gallows and then the original gas chamber in Auschwitz.  Once Birkenau's much larger gas chambers came on line in 1943, this was converted into a bomb shelter for the SS.  It has been restored to how it appeared when it was used as a gas chamber.

At this point, the tour went on to Birkenau, but we broke off from the group here.  We're going to Birkenau today (Thursday) and I wanted to make sure we had lunch and then go back into Auschwitz I to see stuff not on the main tour.

The cafeteria next to the camp is pretty bad, but I suppose no one goes to Auschwitz for the food.  A girl in a hurry behind us jumped the line, but when her friend tried to do the same, I was at the register and I angrily told her to go back.  "But my friend," she started to say, and I cut her off and told her that I didn't care.  I suspect I was just venting some of my anger at the stuff we had witnessed.

When we went back into the camp (via the metal detectors, which are new), I took the students to Block 6, which has a display on the daily life of prisoners within the camp.  The main tour groups skip this so it was much quieter inside.  We could go from room to room and I could talk and the students ask questions.

When we were in the back room with drawings by former prisoners depicting the daily cruelties and beatings a student rushed in that there was a Holocaust survivor speaking.  We rushed over and heard the end of the talk by Eva Mozes Kor. 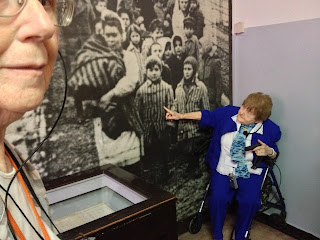 Eva Mozes Kor, points to a photo of herself and her twin sister, taken by Soviet photographers at the liberation of Auschwitz.

Eva and her sister were twins, used by Mengele in his pseudo-scientific experiments.  When we arrived, she was talking about her efforts after the war to organize reunions of medical experimentation survivors.   She also spoke about forgiving the Nazi doctors (which I know I could never do).

Some of the students recognized her story as one we had read at the Budapest Holocaust Museum.  Both she and her sister survived, but her sister's health never fully recovered and she died young, even after Eva donated her one of her kidneys.  After the major crowd left, I strongly encouraged the students to go up and speak with her.

From there we went to the Jewish exhibition.  This was originally opened in 1967, but then almost immediately closed following the Six Day War.  A version was reopened over a decade later.  I saw it in 2006 and it was terrible, reflecting the values of the Polish communist party.  Two years ago they unveiled a brand new exhibition, prepared by the State of Israel and Yad Vashem.  Many students said it was the best memorial they had seen, certainly at Auschwitz and perhaps on the whole trip.

The first room consisted of home movies from Jewish communities around Europe and North Africa.  Several students later said how calming they felt this room was, how full of life, and how they didn't want to leave it.  Unfortunately, the story gets dark very quickly.  We first watched Nazi anti-Semitic speeches, followed by a room of survivor testimony.  Interestingly, in the room of Nazi speeches, there's no place comfortable sit, while in the room of survivor testimony, they provide benches.

There's a moving art display using images created by children during the Holocaust. The last main room is the list from Yad Vashem of all known Jewish victims of the Holocaust.  I found the listing for my great grandmother: 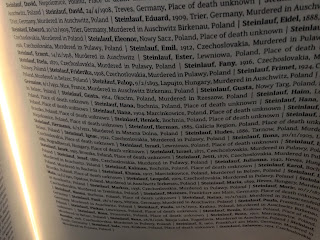 The listing of my great-grandmother (here named Gusta Steinlauf, aka Gitel, aka Gussie), from Yad Vashem's list of those murdered in the Holocaust.  Born in Nowy Targ, Poland, murdered at Bełżec Death Camp

Our last stop was the Roma Exhibition.  This has a lengthy display on the diversity of Roma life and the intensity of the persecutions by the Nazis.  Some students talked about how these images differed so greatly from their preexisting conceptions of how Roma are and looked. 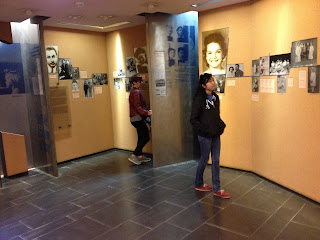 In the Roma Exhibition.

By this point, though, the students were pretty shell shocked.   I let those who wanted to go to the bookstore go early, and we met our driver at 4 pm for our trip back to Krakow. 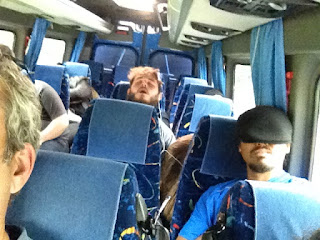 Students passed out on the bus back to Krakow.

There was no way to have a discussion on the bus, given how overwhelmed the students were by what they had seen.  When we got off at the hotel, I asked them to come into the breakfast room, just so we could process the day.

I figured that we would talk for 10-15 minutes, but the discussion lasted for an hour.  The students talked about their different experiences during the day, and their reactions to various memorials. It was very cathartic.

After a break, I took a group of students back to Bombonierka.  I was thinking of making this the place for our final farewell dinner, but I think it's probably too small for us. 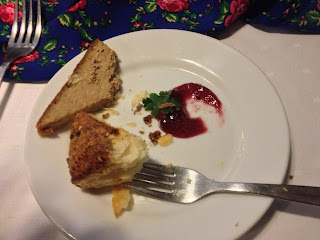 The amuse buche at Bombonierka:  pate with cranberry-horseradish sauce and a small puff pastry. 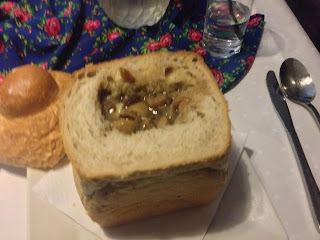 Mushroom sop in a bread box. 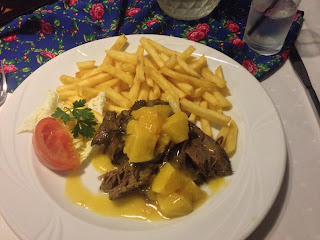 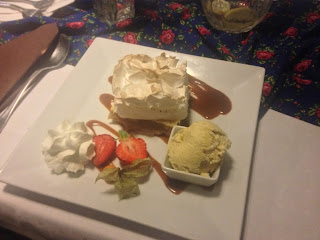 "The most unusual szarlotka in the world" turned out to be a szarlotka with meringue on top, caramel sauce on the side, and a scoop of vanilla ice cream.

Today we're back on the bus, this time to Birkenau.  In the afternoon, we're visiting the Center for Dialogue Among the Nations for a meeting with Polish college students.  Then at 4 pm, we visit St. Maximillian Kolbe Church in Harmeze to see the Labyrinth art installation.