I think the students are used to my mini-panic attacks now; they generally find them amusing.  Today gave them a lot to find humorous.

The underlying problem is that the university rules make it extremely difficult to hire a charter bus.   As a result, even though a charter bus would be the ideal way to travel through the Polish countryside, the university strongly encouraged me to use public transportation.  That meant using public buses to get from Lublin to Bełżec.  This became a personal nightmare.

The problems started when we got to the main bus terminal.  I went up to the ticket window to buy 14 tickets to Tomaśów Lubelski. but she refused to sell me more than 3, telling me instead to buy them from the driver. 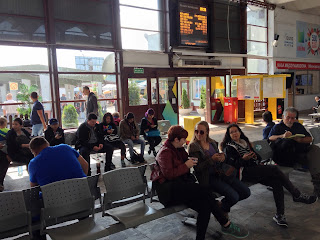 The next step was finding the driver.  Our bus was going to leave from platform 16, but I couldn't find it.  There were some buses near where I thought it should be, one of which said "Tomaśów Lubelski." I asked the driver if they were going there (or I thought I did, since I could only say "Tomaśów Lubelski" and make it sound like a question).  I asked if this was platform 16, and he ended up pointing to the 10 and 6 on my watch.  I later discovered this meant something entirely different.

The bus was supposed to leave at 9:50, but at 9:55 no one had gotten on the bus.  I asked again.  Finally, he said that this was for international travelers only (they were going to Ukraine), and that I wanted platform 16.  He pointed and I finally found it far behind the other, more prominent platforms.  We had missed our bus by 5 minutes.

The next bus didn't leave for another hour and ten minutes, but the original bus driver took pity on us and allowed us to get on his bus where he would drop us off in Tomaśów Lubelski.  We got on the bus, and as we waited I wondered when we would leave.  It turns out we left at 10:30 (when the little hand was on the 10 and the big hand on the 6, as he had pointed to earlier when we had spoke past each other). 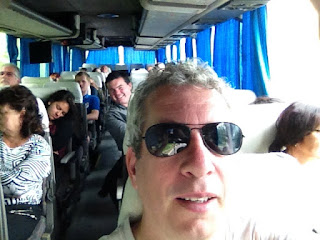 As the bus was about to leave the station, a woman on the bus came up to the driver and started asking questions.  It appears she was on the wrong bus, and she and the man she was with left.  After that, off we went.  I told one of the students I though the woman was speaking Polish with a Russian accent and the older man in front of us turned around to ask how I could be sure she was speaking with a Russian accent and not a Ukrainian accent.  I told him I didn't know, but that it just sounded Russian to me.

We started talking and he told me about himself.  He's an anaesthesiologist (I'm not sure I spelled that correctly), and is a professor of medical engineering (I think, he had a strong accent).  He wanted me to know his family history, but I'm not sure I got all of it.  There was the great great grandfather denounced and murdered in Tsarist Russia for preferring Russia over Ukraine.  There was the great grandmother sold from Ukrainian family to another for several kilos of flour.  There was German grandfather who married the Russian grandmother in Moscow, while the other grandparents were a mix of Ukrainian and Polish.  He currently lives in Tarnopol, but was in Poland to give some lectures.

I asked him about how the war in Donetsk is affecting him and he said that given his background, he's not sure which nationality he identifies with, but feels closest to Russian.  Hearing Ukrainian nationalists calling for all Russians in Ukraine to be killed makes him nervous.  He's also concerned about WWIII breaking out as he's read in American online news that some Americans want to attack Russia, and he's read in Russian news online that some Russians want to attack America.  I told him I was confident that Putin and Obama would not go to war.

He also wanted to know if I had heard about Yellowstone's volcano.  According to Russian news, the volcano is about to erupt and destroy America but the U.S. government is suppressing the information. I told him I had read many stories about the super volcano beneath Yellowstone (it's real, and it's really dangerous), but that it was very unlikely to erupt in our lifetime.

Eventually we reached Tomaśów Lubelski, and the driver let us off at a stop.  I wasn't sure this was the right one, since we had passed the bus station, but I noticed some old, weathered signs and this was the right place.  Two minutes later a small van pulled up that seats 14 passengers.  Our group was 14, but there were already people in the van. Thankfully he took us and we piled in for the 15 minute ride to Bełżec.

I had warned the students to bring food as there was likely nothing open nearby (there wasn't), so we had a small simple picnic outside the entrance to the camp (I didn't want to eat inside). 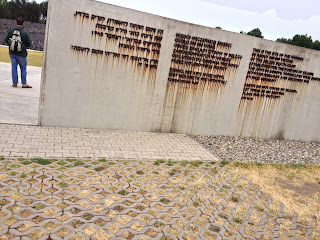 The entrance was sign was made with a material that was designed to run and stain.

The museum is small, but very moving.  They have excerpts from Lanzmann's Shoah, including outtakes of Jan Karski talking about how he saw the cattle cars loaded at Izbica camp.  One large sign, quoting a child's cries from the gas chamber, is something that I simply cannot look at or think about; I find it too painful. 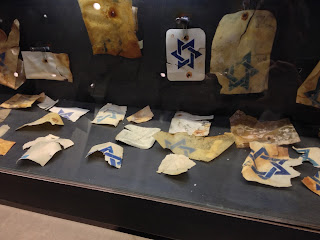 During the archaelogical survey of the site between 2002 and 2004, various items brought to Bełżec by people who were murdered there were discovered, including these Jewish star arm bands.

The exhibit ends in a large, massively large room, called the Hall of Contemplation.  The hall is darkened, with a large, heavy door and no where to sit.  The only thing in the room is a stone text, which I need to translate. 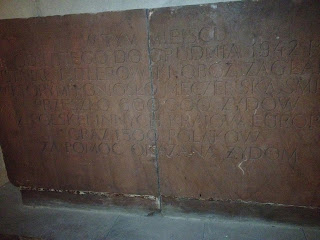 From there we headed out to the memorial.  The design of the memorial is quite striking, particularly in contrast to some of the other places we had already been on the trip. 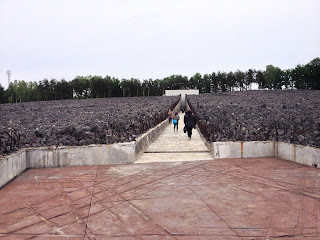 Many of the students commented on their feelings of claustrophobia and isolation walking through to the symbolic site of the gas chambers.  The walls rise quickly up around you until all you can see are walls and the only sounds are your own footsteps. 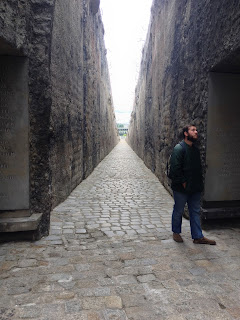 Like the Umschlagplatz (deportation square) in Warsaw, the memorial only contains first names of people murdered here, not last names.  I found my great grandmother's name, Gitel, and lit a memorial candle beneath it and said kaddish. 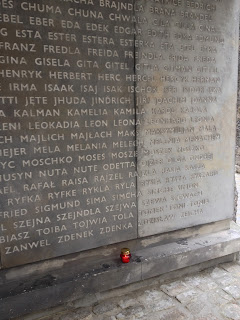 Then we climbed the stairs to the top of the memorial.  The whole thing is a field of volcanic stone, sometimes with rusted metal objects a part of it.  The entire effect is of a vast volcanic wasteland of destruction after a violent eruption has destroyed everything. 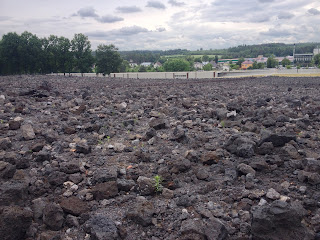 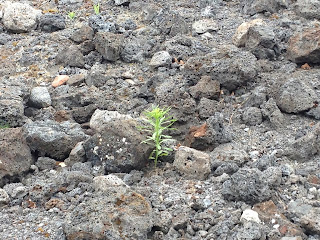 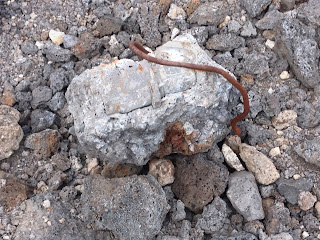 Several of the students compared this memorial to the one we saw in Lidice, Czech Republic.  That memorial to the destruction of the town and the murder of most of its inhabitants had made some of the students uncomfortable, with its manicured, green lawns, resembling more a park than the place of an atrocity.  Bełżec, on the other hand, reflected the atrocity in its volcanic, hellish destruction.

I noted that the sculpture (because this is one vast sculpture) consists of stones, and a traditional Jewish practice is placing stones on a grave.  This set of stones covers the graves of the some 500,000 people, almost all Jews, who were murdered here. 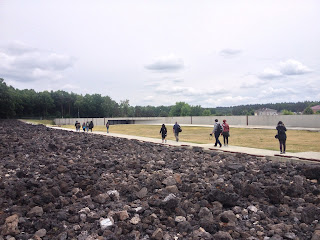 We then left the camp and caught the bus back to Tomaśów Lubelski.  As it happens, we had the same driver and he let us pile into the van, again bursting past the safety limit.  My hope was to find a bus to the Renaissance-era town of Zamość, and we were in luck: the bus came just a few minutes later.  Here again, we had to pile in and hope the bus driver would take all of us.  Thankfully, he did.

The first thing I did when we got to Zamość was to photograph the bus schedule back to Lublin.  Here it is, in all its Polish transport glory: 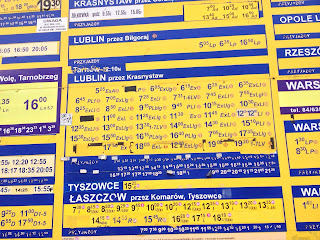 I gathered from this that the last sure bus from Zamość was at 7:20 pm.  As it was only 4 or so, I figured we had time for a leisurely and much-needed dinner.  One concern I had was that my money was running low as I had had to pay for all our bus tickets in cash.  Unfortunately, the bank wouldn't accept my ATM card.

We went to the main square, which was designed by an Italian architect imported to design this privately owned Renaissance-era town. 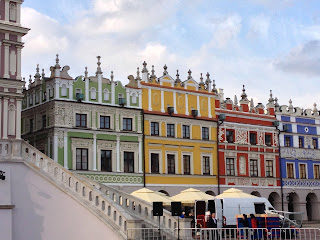 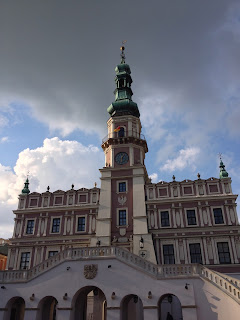 The city hall building, put up somewhat later in 1651. 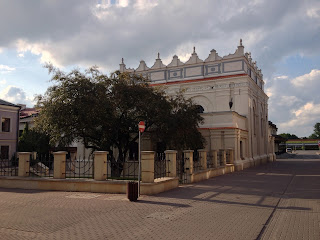 The Sephardic synagogue (1610), replacing the earlier wooden structure from 1590.

After relaxing and unwinding in the square, we headed back to the bus stop.  We just missed the 7:00 pm bus, and there were already people waiting on the 7:20 bus.  I told the students to get on the bus and take any open seat.  That left four of us still waiting.  And we waited for nearly 20 minutes until the driver came back from break.  Somehow, we managed to cram everyone inside (though it took a while to explain that I was paying for the 14 of us).  One student was standing for about 20 minutes until a seat opened up.  After much drama, we reached Lublin just before 9 pm.

But my drama wasn't over yet.  I kept trying to use ATMs to replenish my funds, but the different ATMs kept denying my requests.  I went back to the hotel, retrieved my other ATM card, and finally was able to get the money I need for tomorrow.
Posted by J.B. at 2:21 PM