A Bright and Rainy Day

Today was both a very happy and productive day, yet also rainy and dreary.  A really interesting mix.

My main task for today was to visit the Bundesarchiv in Lichterfelde to find material on the lyricist I'm researching.  Lichterfelde turns out to be a turn-of-the-century Berlin suburb, with large houses (many of which survived the war intact). 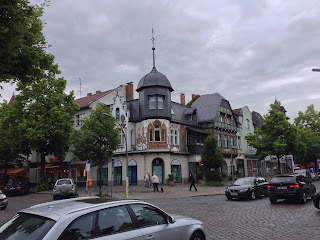 The branch of the Bundesarchiv is located on the former American army base.  They already had the files I requested waiting for me when I arrived.  I turned in the six pages of forms that I had translated the day before, hoping I filled everything out correctly.  I get so nervous visiting archives for the first time; I tell people I'm conversational in German, but most of the time, I understand only half of what people say and I fill in the gaps with the most likely words.

Sometimes this doesn't work.  When I made the reservation for tomorrow night's dinner, the guy asked me for my "Vorname" (that is, my first name), but I heard "[tele]fon nummer."  I kept telling him I didn't have one.

As I was sitting at the table going through the file, an archivist came to see me.  I thought, "oh God, what did I do?"  Perhaps I shouldn't be using a pen?  Perhaps I hadn't filled out the forms correctly.  "Did you do research on Heinrich Graetz at Koblenz?" he asked me.  "Many years ago," I answered, very surprised.  I was there in 1998.  They had maybe three pages in the whole archive on him.  Had I violated some rule, I wondered.  No.  They had just gone through their records and figured out I was the same researcher.  I now have a researcher card that I am supposed to bring back when I return again (no matter how many more years that is).

Going through the files from the Nazi Entertainment Ministry, it was really creepy to see his proof of Aryan ancestry form (charting back three generations), but I was very excited to find a document that appears to confirm a very important part of the story that I'm researching.  The only problem is that the year is wrong (1940 vs 1941).  Every other detail matches, though, so I think it might be a typo on the original.

After I finished my work, I noticed a flyer for an exhibition on the persecution of gay men and lesbians during the Nazi period being held at Rathaus Treptow (the Treptow City Hall).  The problem was figuring out where that was.  I couldn't find it on my metro guide so I asked the archivist.  That hadn't a clue either.  They searched online and printed out the directions (50 minutes by public transportation: bus to S-bahn to S-bahn to bus). The exhibit turned out to be rather small, but it was still interesting.  About 16 panels, some on local people who were arrested and imprisoned.

By now it was raining pretty consistently, so I headed back to the center of town and grabbed a sandwich before heading to the Berlinische Galerie.  This newly reopened museum (it reopened on Friday) has a great exhibition of art by Berlin artists from 1880 to 1980.  Here are some of my favorites: 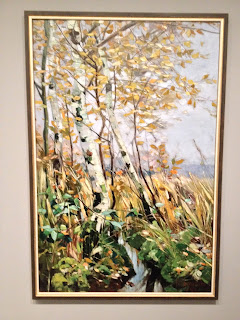 It's by Karl Hagemeister, a member of the Berlin Secession, and it's called "Birch Grove in Autumn."

This sculpture ("Constructed Torso") by Naum Gabo, was actually a cardboard model for the finished piece. Gabo was exiled from Germany during the Nazi period and he dismantled it and carried the pieces with him in a trunk from country to country It is the art of a refugee, which itself went into exile. Now it has been restored and reassembled. 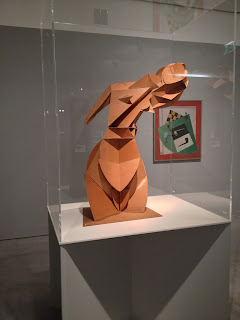 The Berlinische Galerie has two paintings by Felix Nussbaum.  An artist with the New Objectivity movement, this 1931 painting depicts the generational conflict between the rising avant-garde, and the old avant-garde, now the establishment, led by Max Liebermann.  Liebermann is the one on the roof, his self-portrait (which also hangs a few rooms away) being handed to him by the goddess of victory, while the young artists works are abandoned in the courtyard before the Academy of Art. 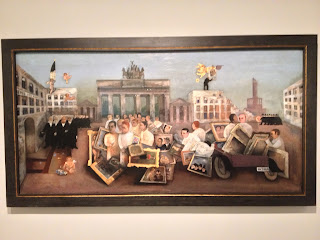 What makes Felix Nussbaum so famous, though, are the paintings he created in exile and in hiding during the Holocaust.   After escaping from a French internment camp, he and his wife lived in hiding in an attic.  This 1942 painting, "Self-Portrait with Shroud," shows the artist in hiding.  At first, I thought each person in the painting was him, just from a different angle, but an Israeli woman I was chatting with (I think I've spoken more Hebrew than German here) convinced me the person on the far left is Nussbaum's wife.  Does the leaf represent hope against death?  If so, it was in vain; they were all arrested and deported to Auschwitz in 1944, where they were murdered. 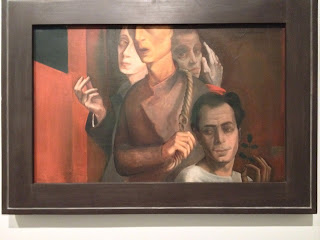 The current temporary exhibition is on post-war architecture in Berlin.  You would think that there would be stark differences between east and west, yet that wasn't always so.  Since so much of Berlin was destroyed in the war, there was a huge need for building housing, and both east and west turned to large, anonymous housing blocks.  Consider this collage of buildings from both sides of the Wall: 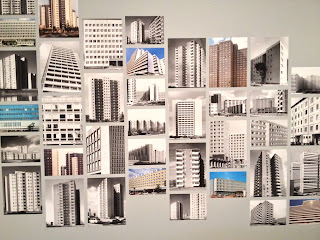 In the epilogue to the exhibit there were some contemporary artists' takes on the architecture of the city.  I particularly liked this one:  spray painted on cardboard. 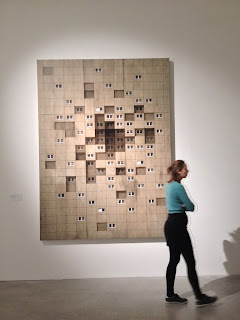 It's one of the mass produced large apartment blocks (those eyes are actually windows), but the whole thing appears to be dissolving, like some kind of architectural macular degeneration.


The third student arrived tonight, but it turns out she booked a hotel out of the city center (this came as a surprise to all of us).  It's 11:51 pm as I right this now, and I just got back 10 minutes ago.  I have to be up early tomorrow to start picking up the rest of the students, so I'll have to come back to this later.
Posted by J.B. at 2:52 PM