A Good Day in Krakow

Yesterday we had our last major transfer of the trip:  from Lublin to Krakow via Warsaw (it's actually faster to go through Warsaw than to travel directly).

Thank God I bought seat reservations on the train to Warsaw; it was packed.  While we were spread out across train cars, most of us were near each other.  I had one other student in my compartment, but unfortunately, I was seated next to (and partially on top of) a rather large, fleshy woman who took up more space than her seat allowed.  I spent much of my time standing in the main corridor, which was very full. 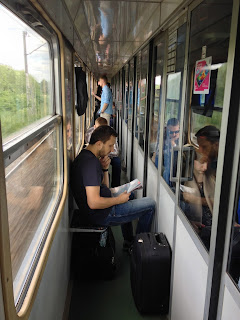 Still, at least it wasn't as bad as Wagon 12, which was full of high school students and whose toilet was overflowing.  I had to walk through that wagon to reach a pair of students in Wagon 11 to let them know when we would be arriving in Warsaw.

No delays this time, thank God, on our train to Krakow.  The cost came in significantly over budget and when I got on board I saw why.  We had a very fancy, premium train.  Very comfortable seats, with computer/iPhone chargers and a nice dining car.  Many of the students went right to sleep. 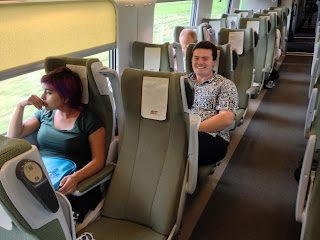 One student asked if this is what First Class is like.

I went to the dining car for lunch and we got into a conversation with a Polish couple across from our table.  He wants to go to the Grand Canyon and Las Vegas on his honeymoon; she wants to go to China. They both recommended the chocolate cake, which I and another student got, but I have to say it was a little dry for my taste.

Slight drizzle in Krakow but we reached our hotel fine.  So far the students like their rooms, though I think some of the students, who think any building older than 1950 is haunted, will tell me today they heard ghosts in the 19th century corridor (actually, this hotel used to be a synagogue before 1942).

My plan was to take them on a orientation walking tour of the Stare Miasto, the Old City of Krakow.  We strolled up to the Rynek (the main square), and they got money and all the students who slept on the train got lunch. 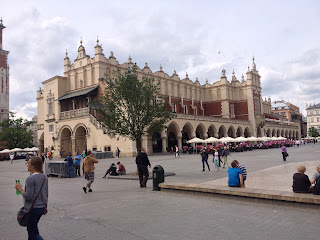 The medieval cloth hall in the middle of the Rynek.  Some students just ran there to go souvenir shopping. 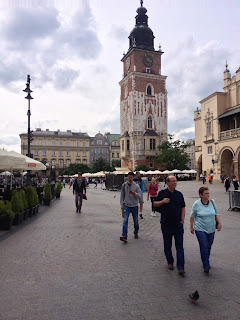 Part of the original City Hall.

After that we went up past St. Mary's Cathedral, and when I told them about how the triptych medieval wooden altar was stolen by the Nazis, some students recognized the story as being featured in the movie The Monuments Men.  After that, I took them up a big shopping street, featuring at least one store that allows you to sample Polish cuisine.  I'll be back here later to by some to take home with me.

Out the last remaining gate of the Old City walls, and then we caught a tram to the Kazimierz neighborhood.  The trams here share the street with traffic, which means if a car or pedestrian drives/walks in front of it, the driver has to hit the breaks.  Luckily, the students were holding on.

We're going to do the full synagogue tour on Friday, but today, I just wanted them to find out where everything was.  Among other places, I took them to this courtyard featured as a backdrop in the film, Schindler's List.  Today we're going to the Schindler Factory. 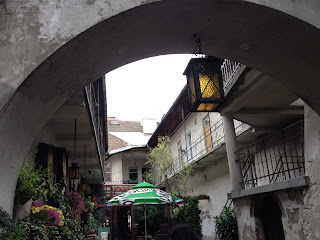 Our final stop for the afternoon was the Krakow Jewish Community Center.  I had written them about the possibility of having my students meet Polish Jewish college students.  We went up to the third floor meeting room, where the director introduced us to Sławek, who had finished his final exams early and could meet with us. 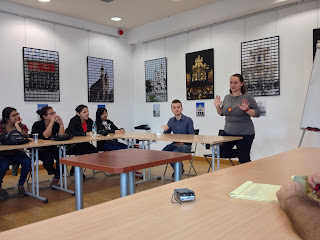 Sławek, talked about being the grandson of Holocaust survivors and how many young Poles come to the center only after they find out about concealed Jewish ancestry (though he always knew he was Jewish).  One local survivor, he told us, has three children and twelve grand children, and none of them know she was a hidden Jewish child during the war.  She has lived outwardly as Catholic almost her entire life, and none of them know she is actually Jewish.

We were later joined by another college student, Sara. 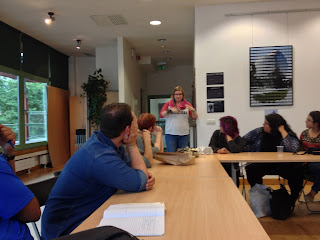 Perhaps because Sara had been the United States, the students began to open up more.   She couldn't understand how in Florida, they can go from 40 degree celcius weather to 15 degree celcius air conditioning.  The students then asked about whether ice and tap water existed in Poland (they miss it in the restaurants).  Yes, Sara said, we also have running water and Wifi here.

There was a good dynamic between Sara, Sławek, and the students, and we had a wide-ranging talk about a variety of topics.  Sławek tried to teach them how to pronounce some Polish letters. 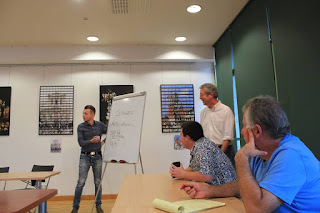 And then he taught them Polish words he thought they should know, like "good morning," "thank you," and "Kocham Sławek," which means "I love Sławek." 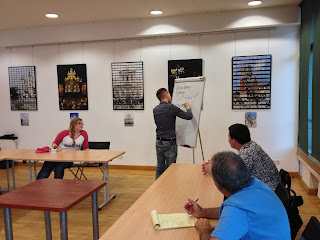 The real fireworks started, though, when the students asked how much it cost to go to Jagiellonian University in Krakow.  "It's free," Sara told them.  That just bowled them over.  They were trying to explain the semester cost of CSULB in złoty.  I did the conversion on the board, from $6,000 into Polish złoty: 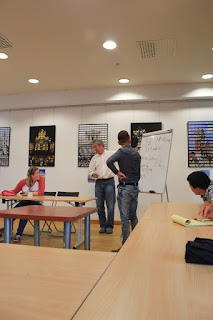 Sara was very, very shocked at how much American students have to pay (and we are one of the cheapest universities in the United States: 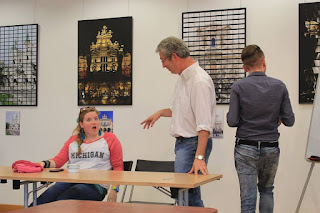 After the students learned about how inexpensive good health care is here, many seemed prepared to learn Polish and open up a food truck selling good Mexican food (something many of them really miss).  I warned them that one of the drawbacks of living in a former communist country is the regulation of businesses.  They also were shocked to find out that they have been paying sales tax (VAT) of 23% on all their purchases.

We ended up talking for two hours and then I escorted the students back to our hotel, pointing out the laundromat on the way.

For dinner, I went to Marmolade in the Old City and finally had a chance to get some goose.  It was cooked in a red wine, clove, and cherry reduction, but I have to say, the cherries made the sauce too sweet for my tastes.  I think either tart cherries, currants, or cranberries would have worked much better. 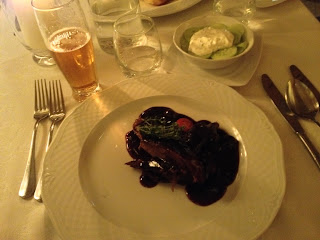 It was pretty reasonably priced too.  The whole meal, plus the mizeria (cucumbers in sour cream) and beer, came to about $20.