In planning this trip, I built in what I call "mental health days."  These are designed to give us all a break from the horror that is this course's subject matter.  After the last two very heavy, dark days, I thought we would all need this.  My plan was to head out this morning to the Renaissance-era town of Kazimierz Dolny.

Of course, we still had to get there.

The first task was to find our bus stop.  We wandered all over the place until a driver pointed us to the vacant lot where it was.  Much later, after we came back, I found a map.  It was of no use what so ever, as it doesn't list our stop on it. 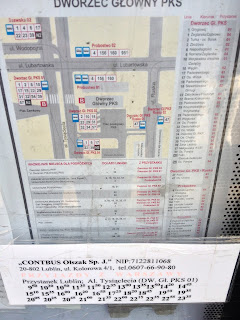 When we reached our bus stop, a good five minutes before departure, the small van was already full and was turning away customers.  We had no choice but wait another hour for the next bus.

I was determined to get on it, but as there's no place to queue up, I ended up engaging in some elbowing with the couple behind me in this photo. 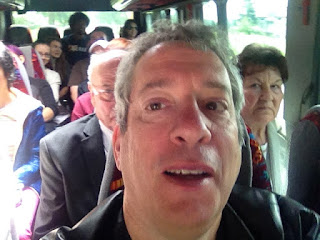 All our group got on, and all but one had a seat.   The last one got a seat after about 20 minutes.

After an hour we reached this beautiful, little town, which really took off with the grain trade in the 14th century. 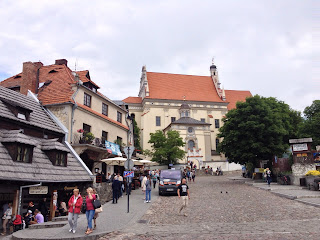 There's a ruined castle above the town (which some of the students visited later), and the Wisła River flows by it. 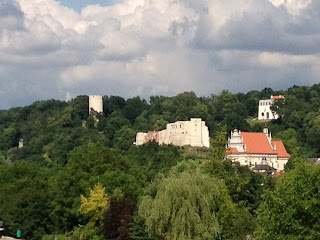 After giving them a brief tour of the two main squares (one for Christians, the other for Jews), I told them they had the next two and a quarter hours free and that we would touch base at 2 pm. 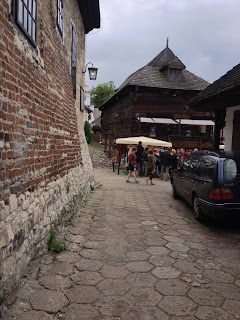 [The side of the former synagogue on the left and the former wooden kosher butcher stores in the background.  Prior to 1940, half the town was Jewish]

Several of the students and I found a lovely tavern with a beautiful garden to eat lunch.  I have to admit, the garden was the best part of the meal. 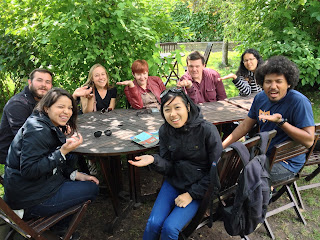 While it may appear that they are checking for the rain that started to fall as we were eating, in fact, they are acting out a "meme" called "confused girl."

When it did start to rain we bolted inside.  The inside space is nice too; I just wished the quality of the food matched.

After we met up at 2, I told the students that I planned on taking a walk along the river to a ferry and that anyone who wised to join me could.  Otherwise, we would meet up at 4:30.

The path led through small homes with lush gardens. 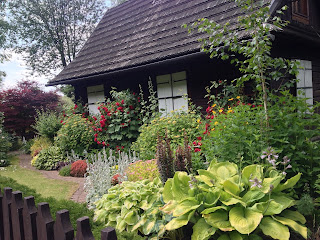 After about 20 minutes, we reached the river. 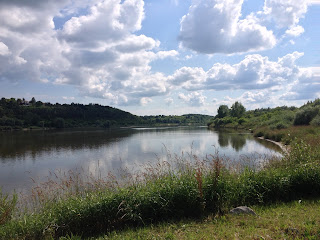 My plan was to take the ferry across, which we did: 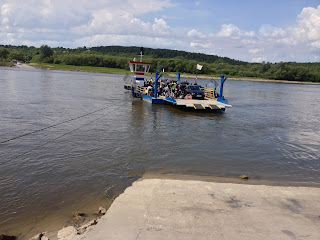 [This was a very slow moving ferry]

And to hike to a nearby castle, which we didn't have time for. 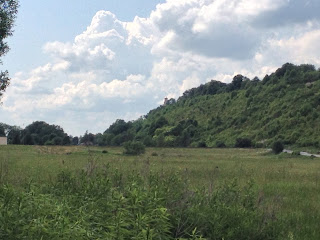 Still, the scenery was lovely, and we all enjoyed it (except for the two students whom the mosquitoes kept biting). 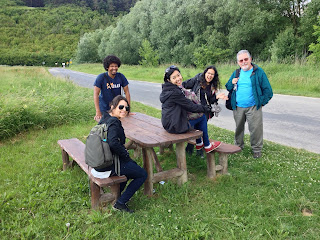 The sun kept playing hide and seek all day.  At first it was partly cloudy, then rainy, then partly cloudy, and finally sunny and hot on our walk back to Kazimierz Dolny. 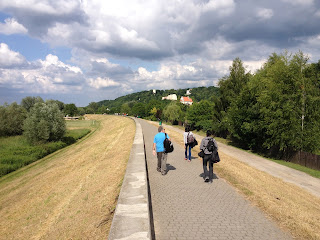 My plan was not to take the last bus back to Lublin (at 5:58 pm), but the penultimate bus at 5:01, just in case there were any problems.

We arrived 15 minutes early and no one was waiting, but as the time approached for the bus, people came out of the woodwork.  With no place to queue, I didn't want to have any of our group stand, let alone not get on board.  I urged the students to be more aggressive in dealing with the crowd.  Luckily, we all got seats.

Back in town, I sent the students back to the hotel, while I headed off to the train station to buy our tickets to Krakow. 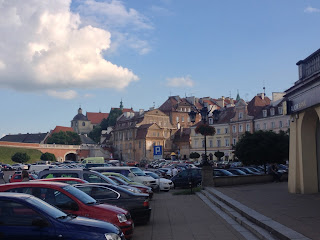 [The old city of Lublin on the hill.  The area of the parking lot used to be the Jewish ghetto, until the Germans burned it in 1943].

I hate buying train tickets in Poland.  After waiting 15 minutes in the domestic ticket line, the clerk made a face when I asked to buy 14 tickets to Krakow via Warsaw, and sent me to wait in the other line.  When I got to that clerk (on the international rail ticket desk), of course, she could speak no English.  I went through my usual sign language (I wrote out what I want in Polish on a piece of paper and hold it up).

Eventually, I got all the tickets, though not all of us are together and we are split between three wagons on both trains.  I can relax when we make our connection in Warsaw (God willing).

By the time I got back to the hotel, it was late and I was tired and hungry.  For the first time in I don't know how many years, I ate at McDonald's.  I'm not proud of myself, but I was too tired to find anything else open on a Sunday evening. 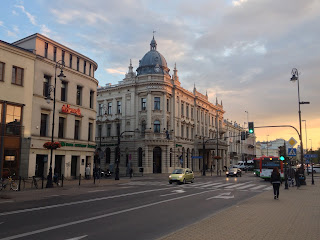 This giant communist-era monstrosity is a block away from our hotel. 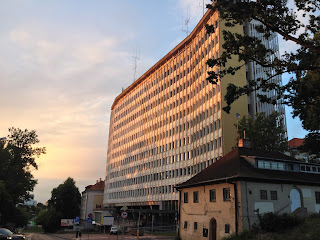 That's all from Lublin. Hopefully my next post will be from Krakow.