Seeing Things Other than the Mona Lisa

Woke up around 7:30 this morning, which seems to be becoming my standard time for getting up, with the room boiling hot.  I think they turn up the radiator around 7 am.  Why?  A quick check of the outside temperature revealed why: 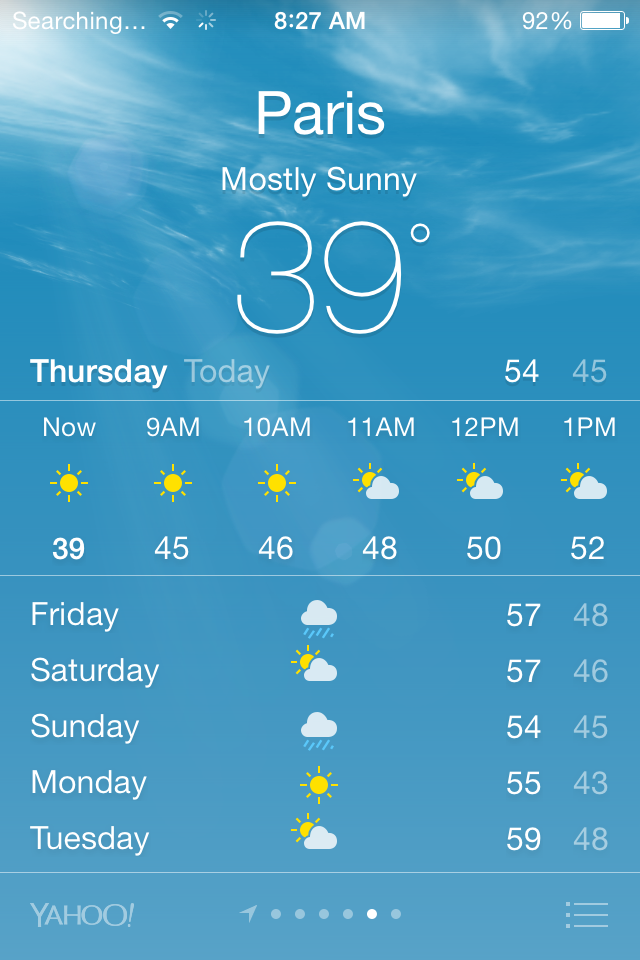 I do like the breakfasts at the hotel.  Sure, I could eat for a few euros cheaper at the boulangerie on the corner, but it's awfully convenient.  I also don't have to bundle into my jacket just to eat. 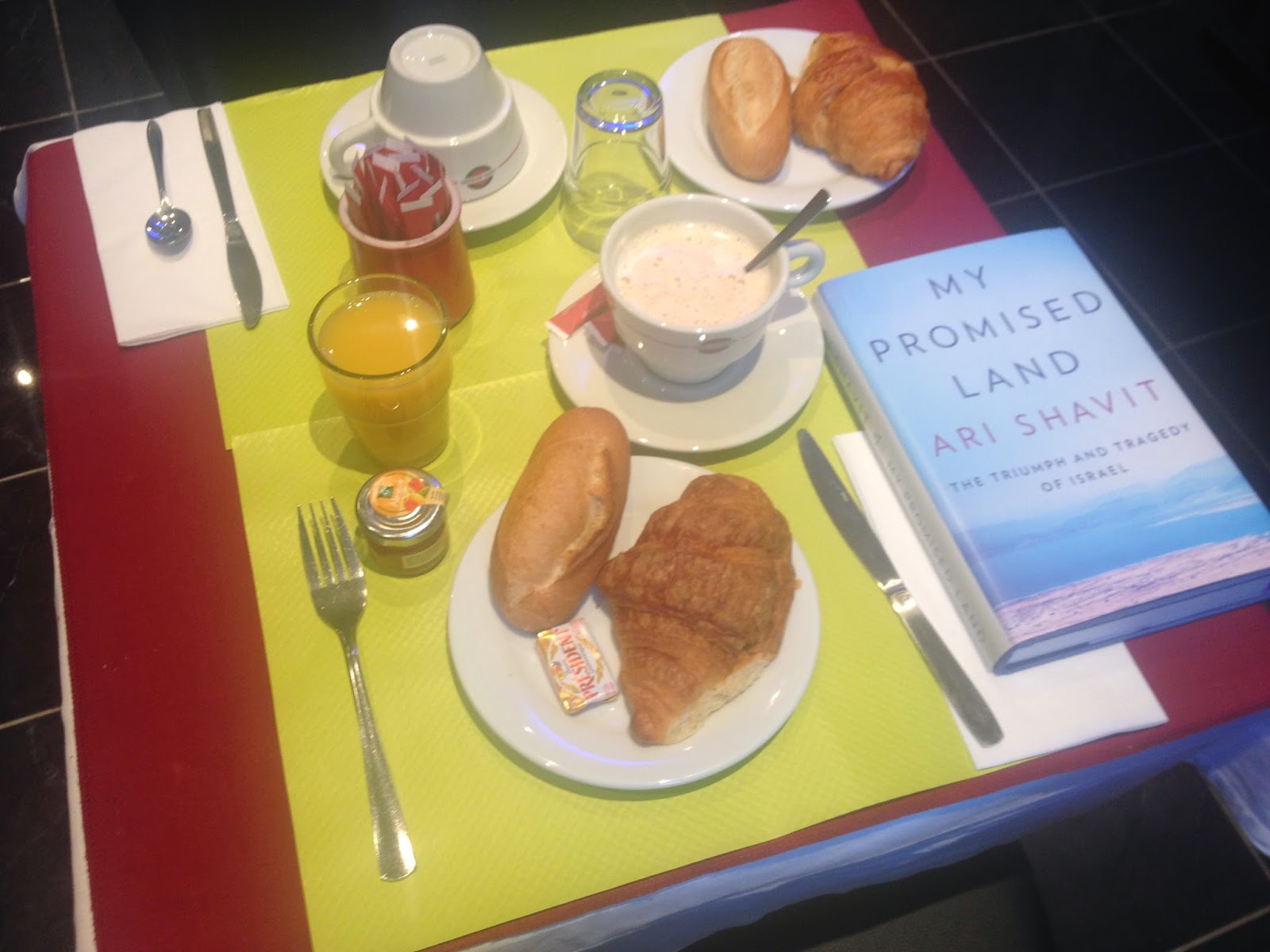 They had the French news playing in the breakfast room, and I could see there was a story about students in Paris lycees going on strike to protest police brutality (this concerns the death of a 21 year old environmental activist in the south of France last month.  Since my hotel abuts two lycees, I was curious what I would find this morning.  Here's the protest scene in front of one them: 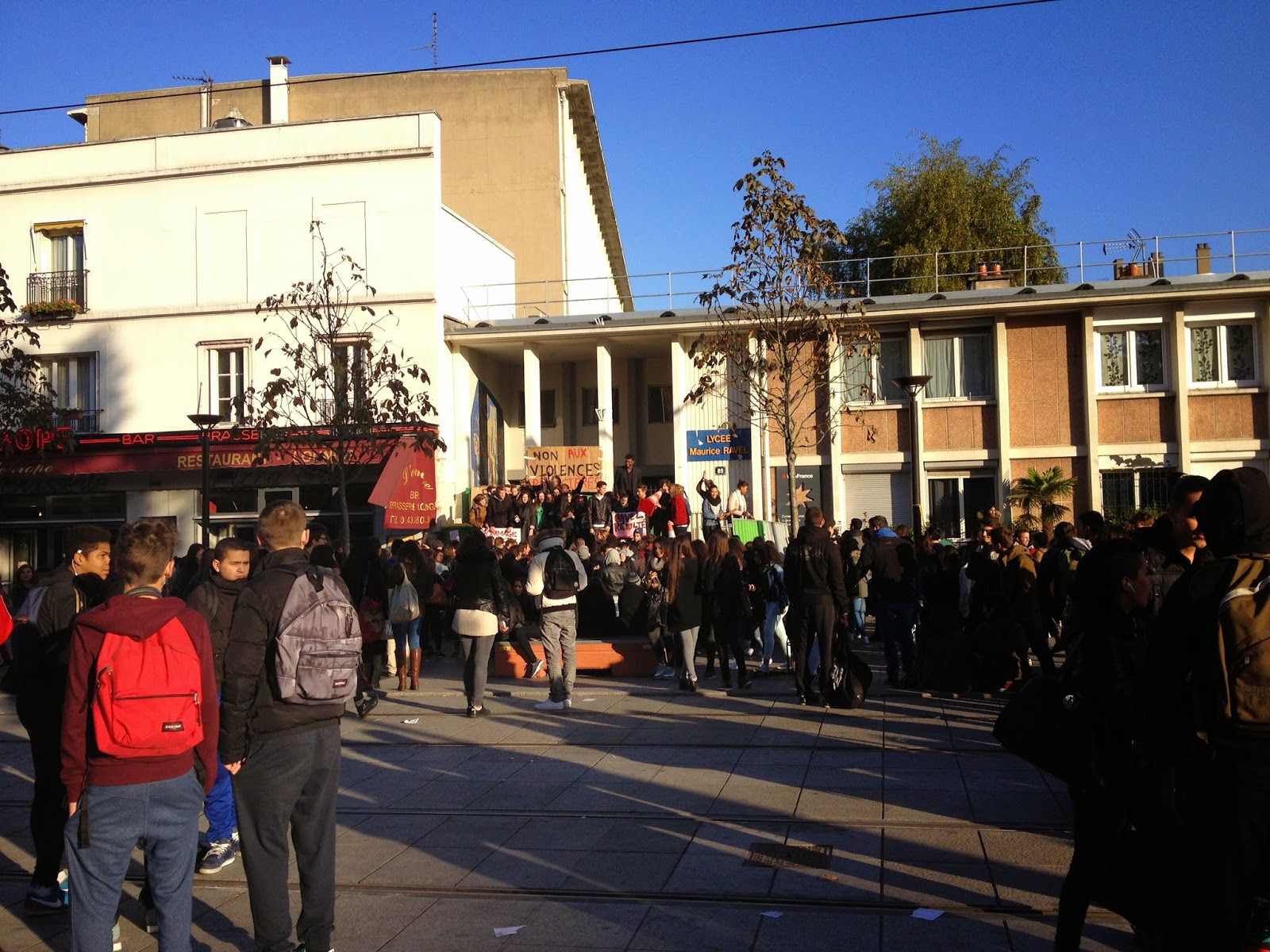 After spending two days looking at digitized images of newspapers, my eyes needed a break, so no archives today.  Instead, I headed off to the Louvre.  Along the way, I stopped to get the International New York Times (which has replaced the International Herald Tribune).  The guy said to me "cinq euros."  "Cinq?!" I replied, "c'est trois!"  He smiled and mumbled something about checking to see if I spoke French.  I'm not buying anything from his magazine stand again.

One advantage of visiting the Louvre on a weekday in November is no lines at all.  It also helped that I entered via the Carrousel du Louvre while their metal detector was down (he just waved me through) and I skipped the ticket lines and went right to one of the ticket vending machines.

They have a special exhibit on Morocco, so I spent an over an hour going through it. No photos, unfortunately, and I would have loved to snap a shot of the 14th century copy of Maimonide's Mishneh Torah, but even more his copy of the Talmud with the comments he, his son, and his grandson all wrote in the margins.  Maimonides' connection to Morocco was rather tenuous; he was included as an example of the Almohad persecutions.  The exhibit was fully of beautiful wood work, intricate stone and metal carvings, and finely illuminated manuscripts.

After that, I headed up to see the newly opened halls devoted to the interior decoration of private apartments in Paris in the 18th century. Something just totally different from the Moroccan stuff. 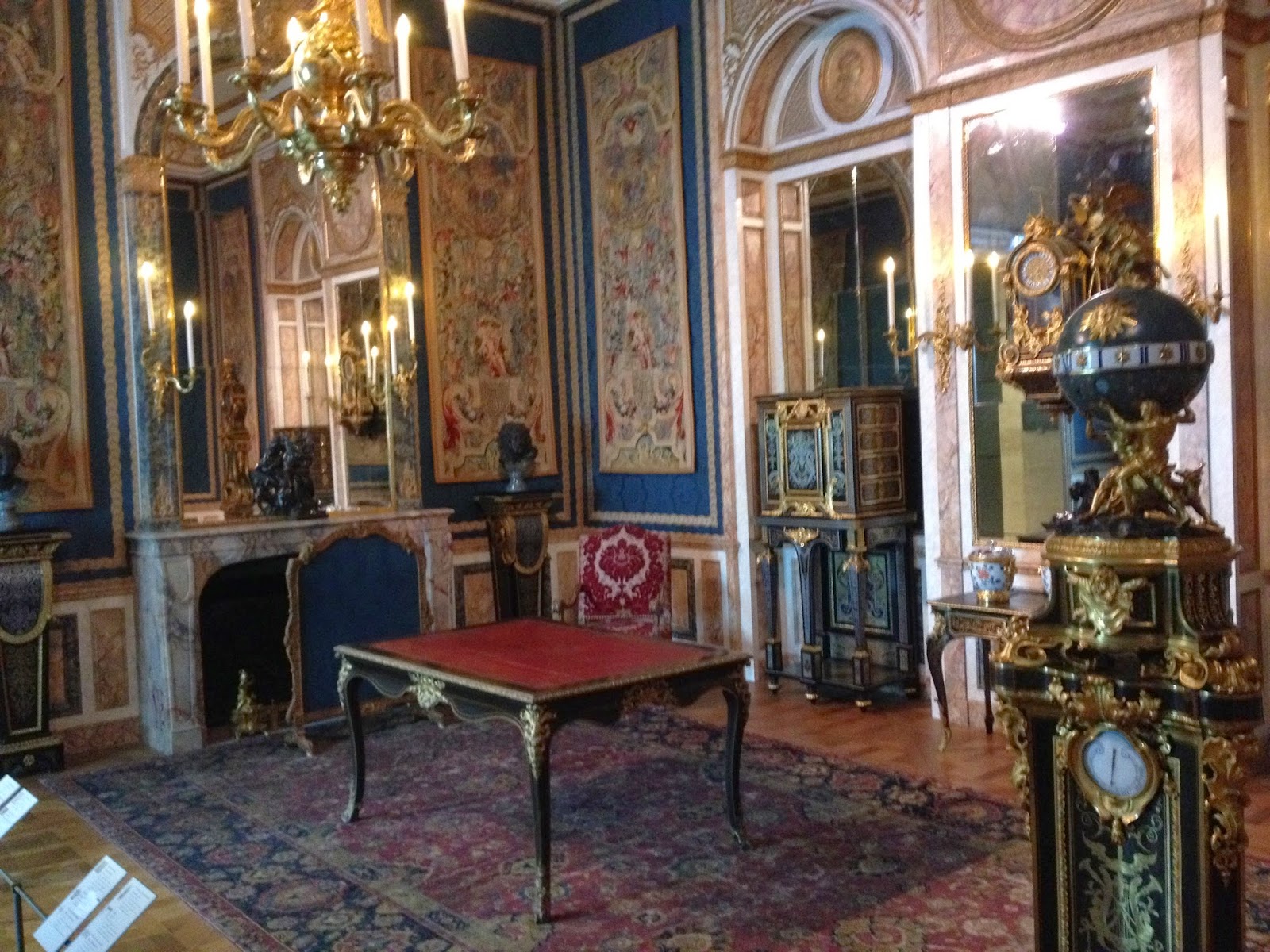 After over two hours in the museum, I was beginning to get burned out, but I didn't want to leave without heading over to where all the chaos was:  the Italian painting sections.

This is the room with the Mona Lisa: 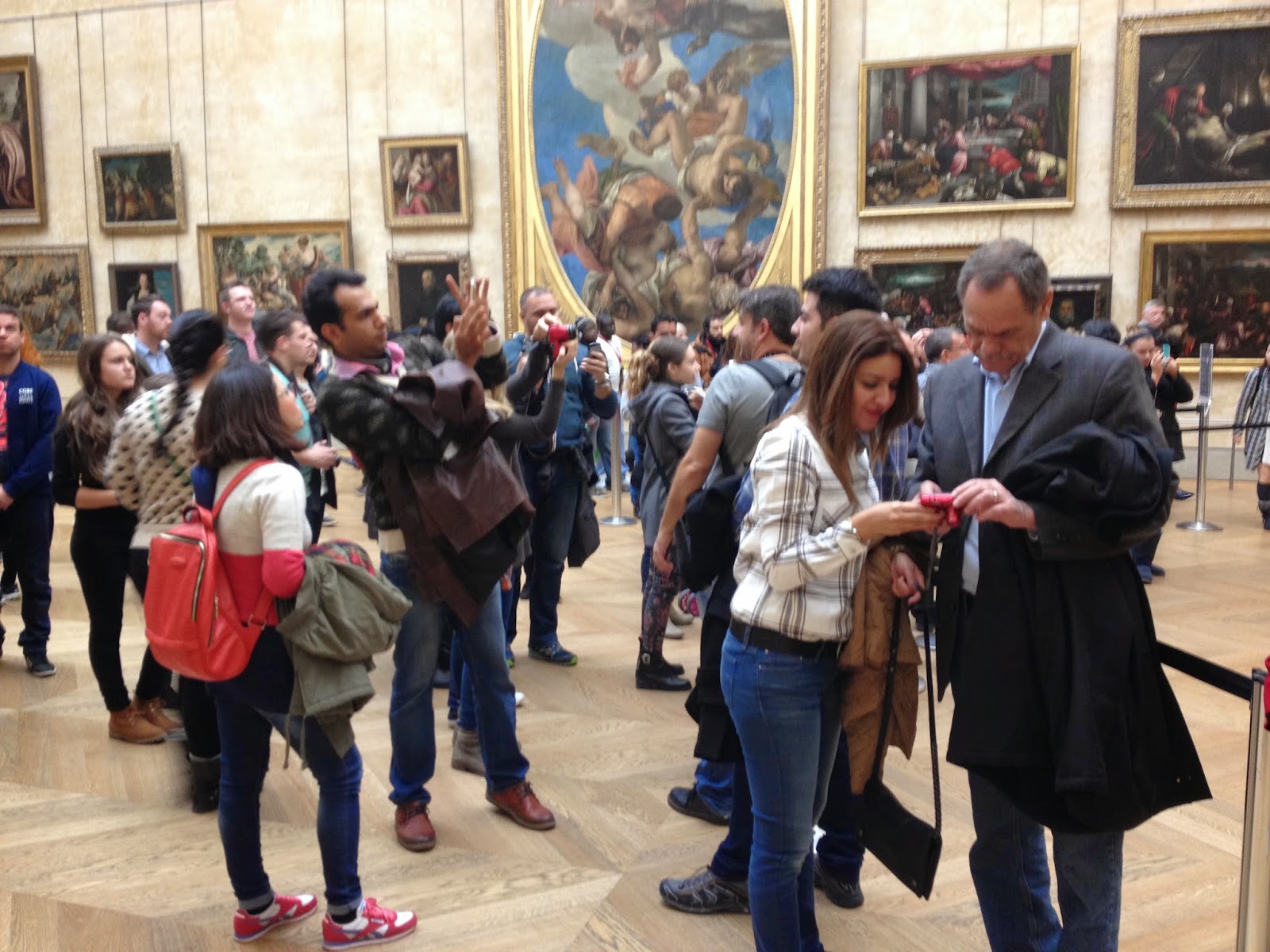 But there are some lovely things painted by da Vinci in the museum that are, in my opinion, nicer than the Mona Lisa.  Take this portion of his "Madonna of the Rocks." 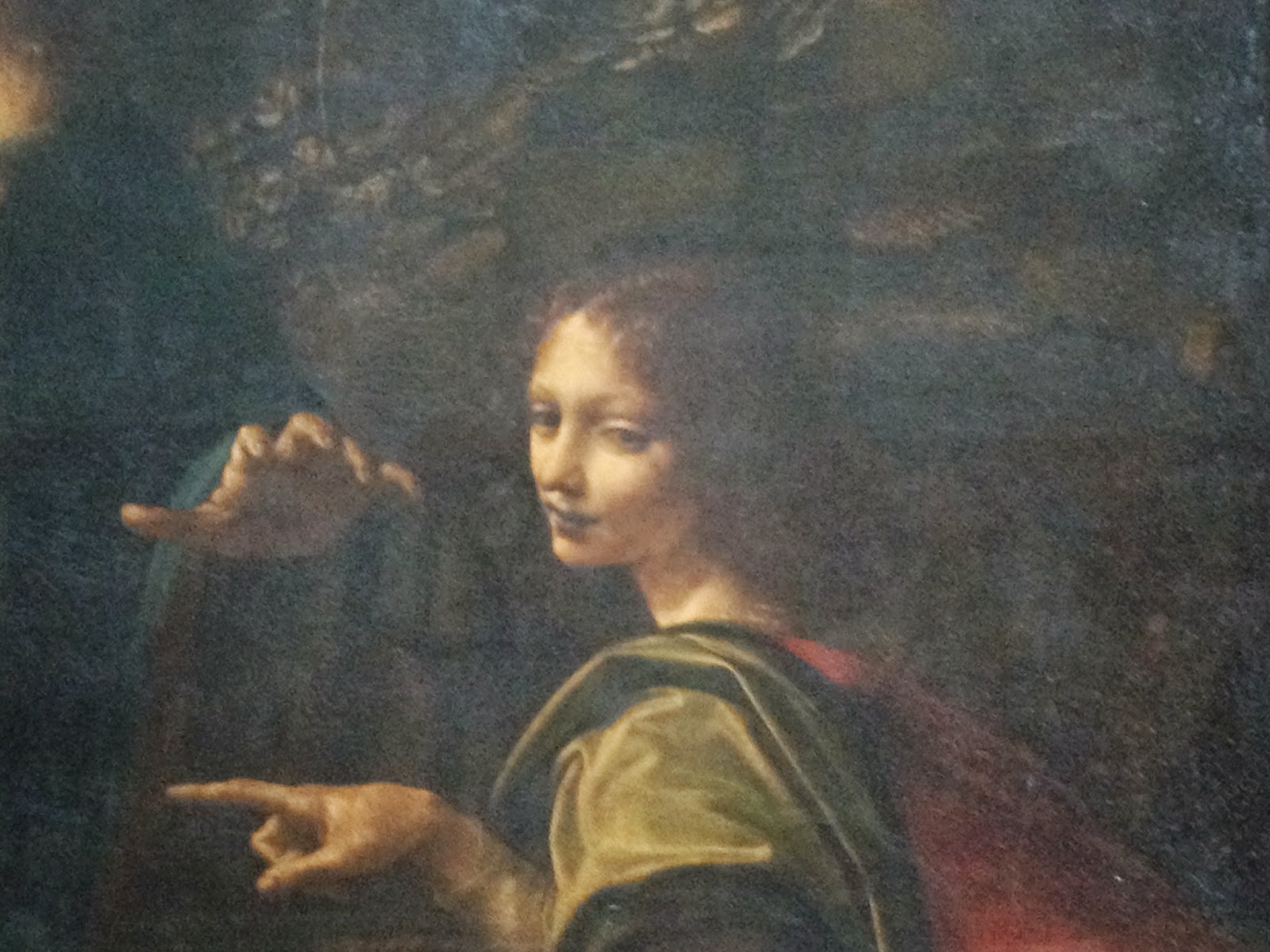 They also had three Caravaggio paintings, including this one of the fortune teller that is also, in my opinion, far more interesting than the Mona Lisa (sorry about the angle; trying to avoid glare): 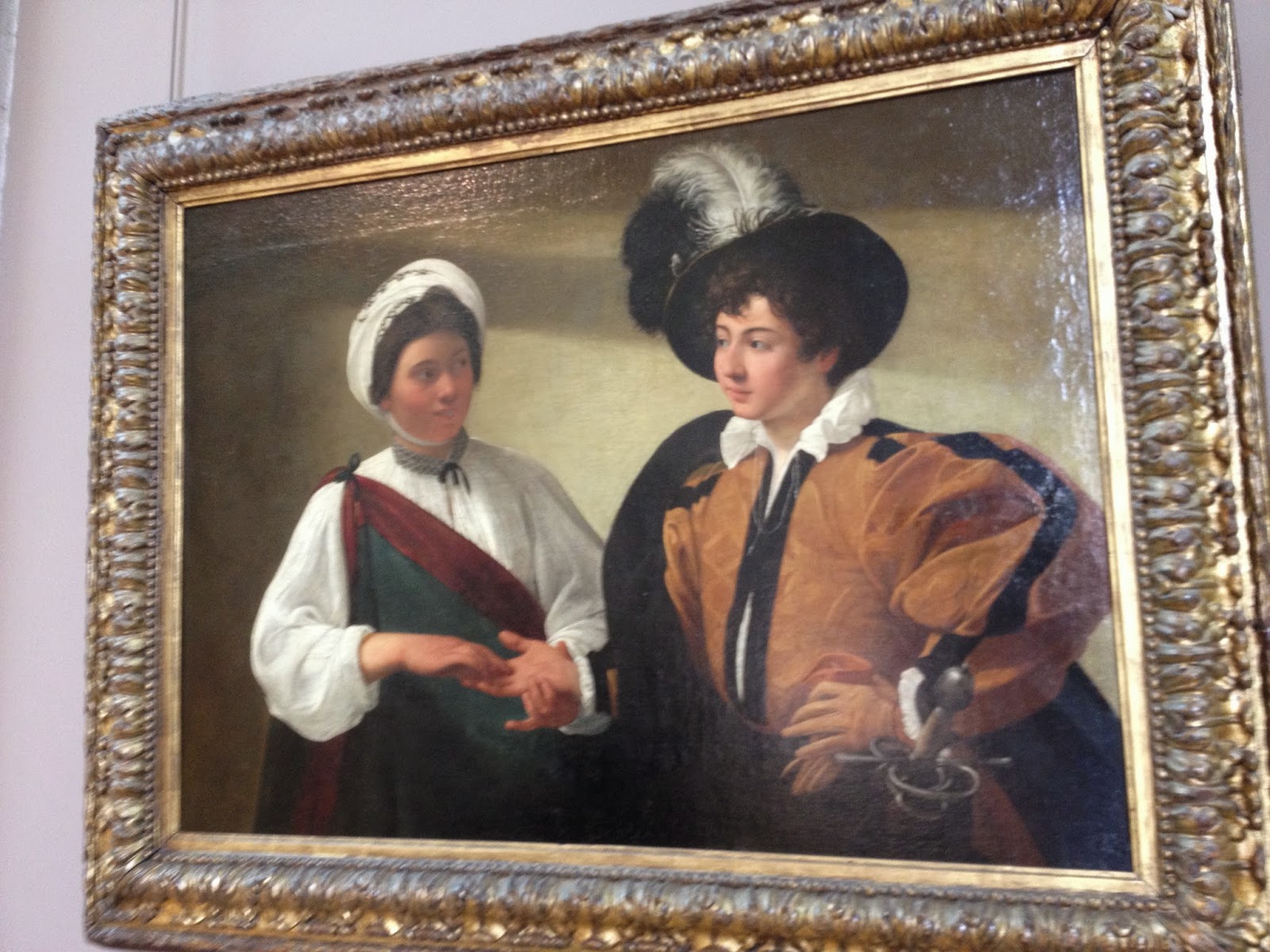 I walked around the area north of the museum, looking for a place for lunch.  I ended up in a small cafe, having the daily special:  veal with tomato sauce.  It was more like a stew, but it was very good.  Then I headed back towards the Jardin du Tuileries, where I saw the Eiffel Tower for the first time this trip.  I've just not been those parts of Paris where you can see it. 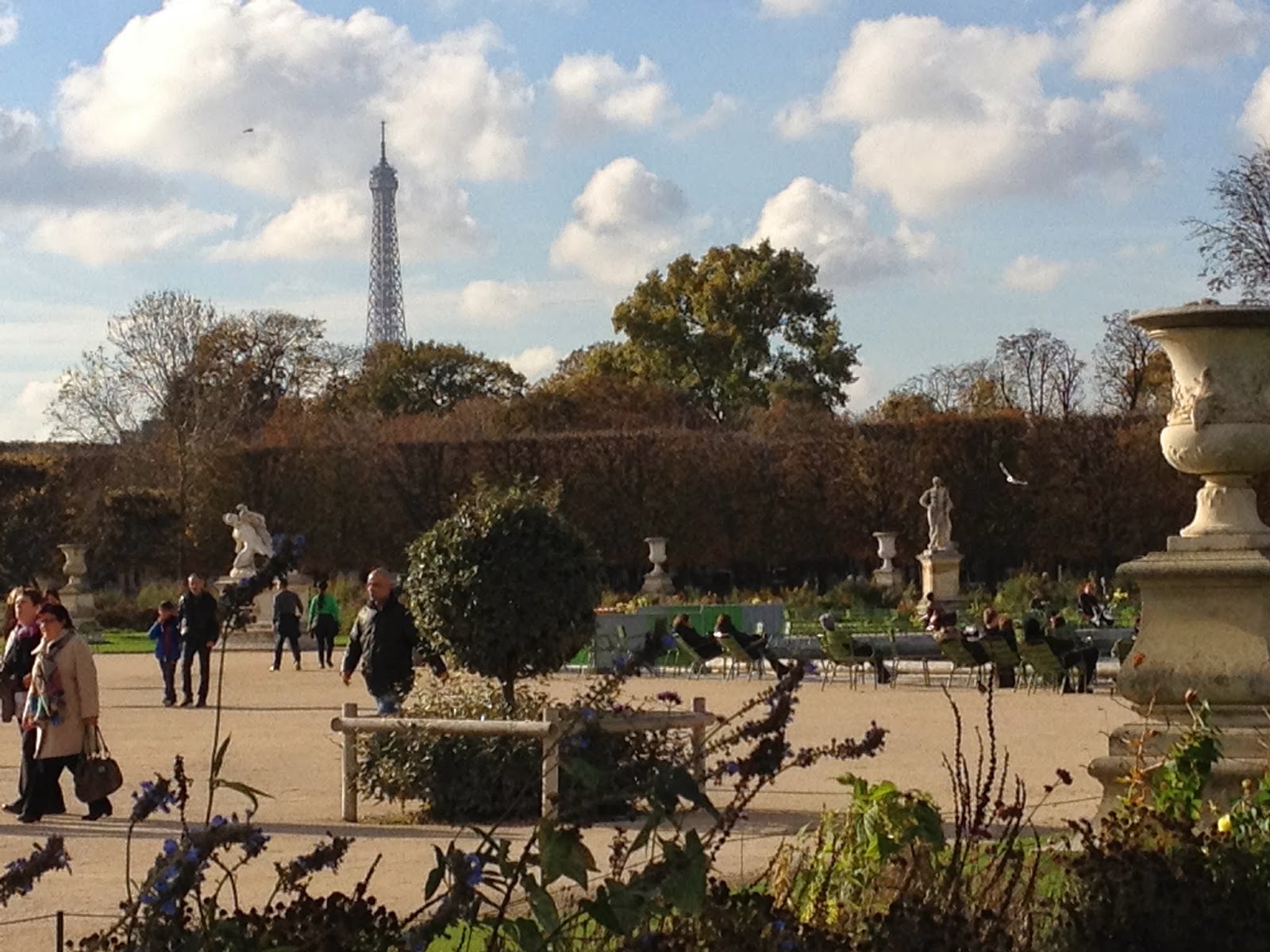 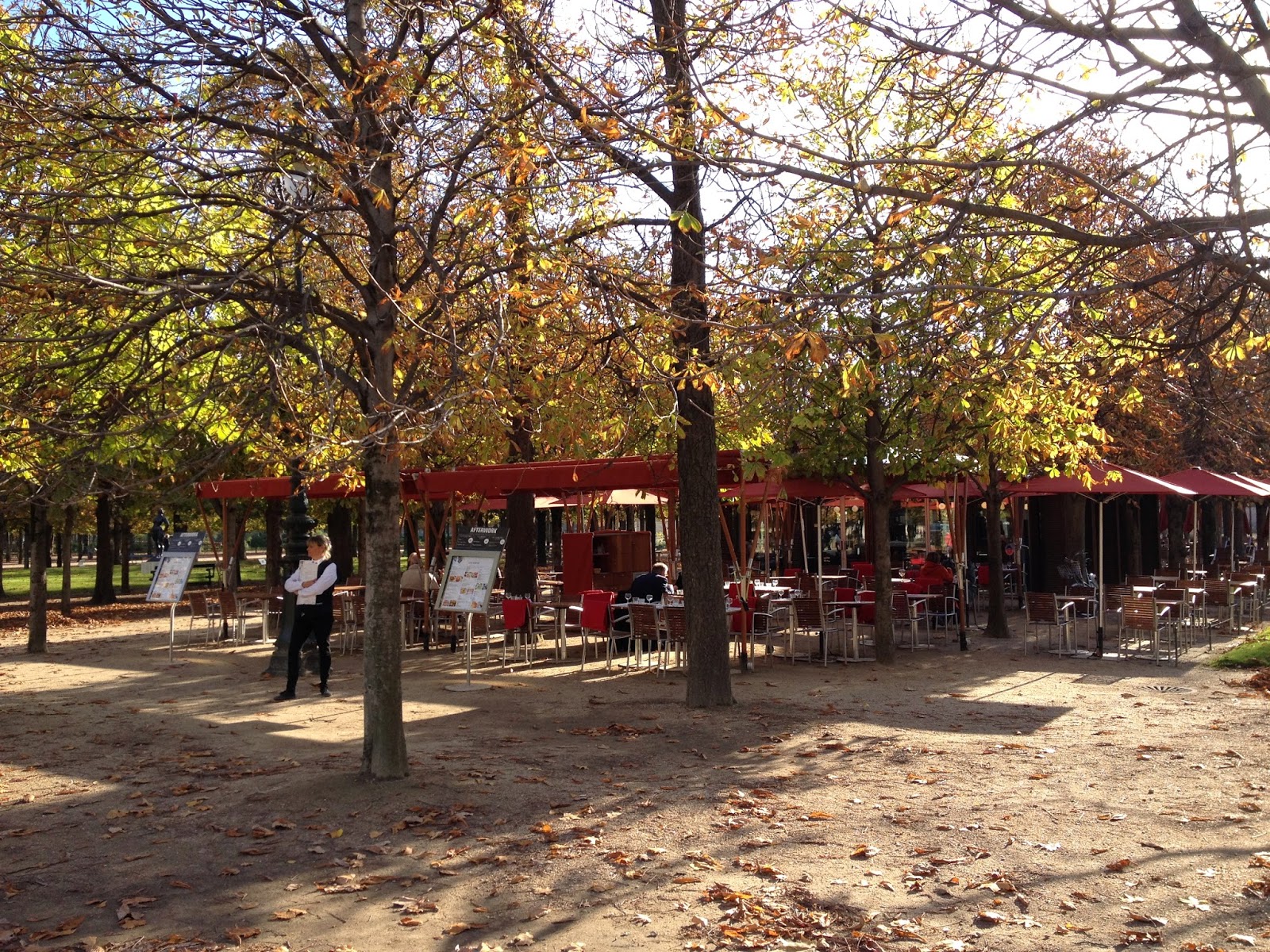 My goal for after lunch was the Jeu de Palme, which is having a major retrospective exhibition of the photographs of Garry Winogrand.  Really amazing photos.  A few things that stand out in his pictures:  there's always drama; he seems to catch people unawares, often with charged looks; and he loves it when people show their teeth when smiling or laughing.

I went for another long walk after leaving the museum, looking for a place for coffee.  I ended up at Le Stube, which turned out to be a little piece of Germany here in France.  I ordered the Zimt-Apfeltorte and cafe creme.  The coffee was much more German, not nearly as bitter as the French roast. 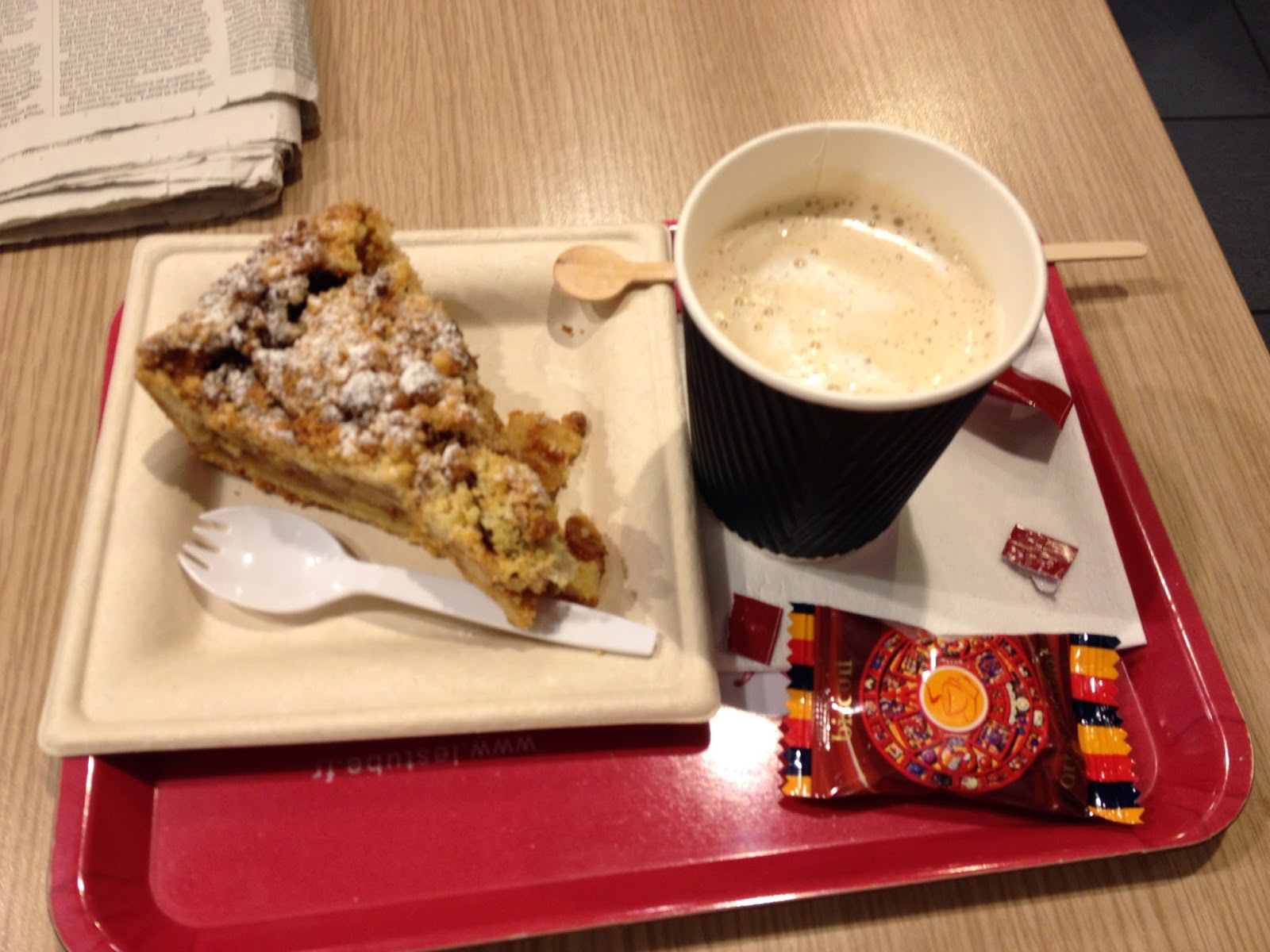 After that it was back to the hotel to put my stuff away and figure out where to go to dinner.  I went online to find places in my neighborhood, preferably in walking distance.  Eventually I decided to try Le Picotin, a small restaurant about 15 minutes away (at a fast pace) from my hotel.  They don't open until 7:30, so that's when I left my hotel.  I wanted to make sure I wasn't the first to arrive.

The menu offerings were quite small, but I easily decided what to have.

I started off with joue de porc confites, fromage frais aux herbes et confiture d'oignons.  I've decided to leave that untranslated since some people might be put off it if they knew exactly what it was.  What it was, was quite tasty. 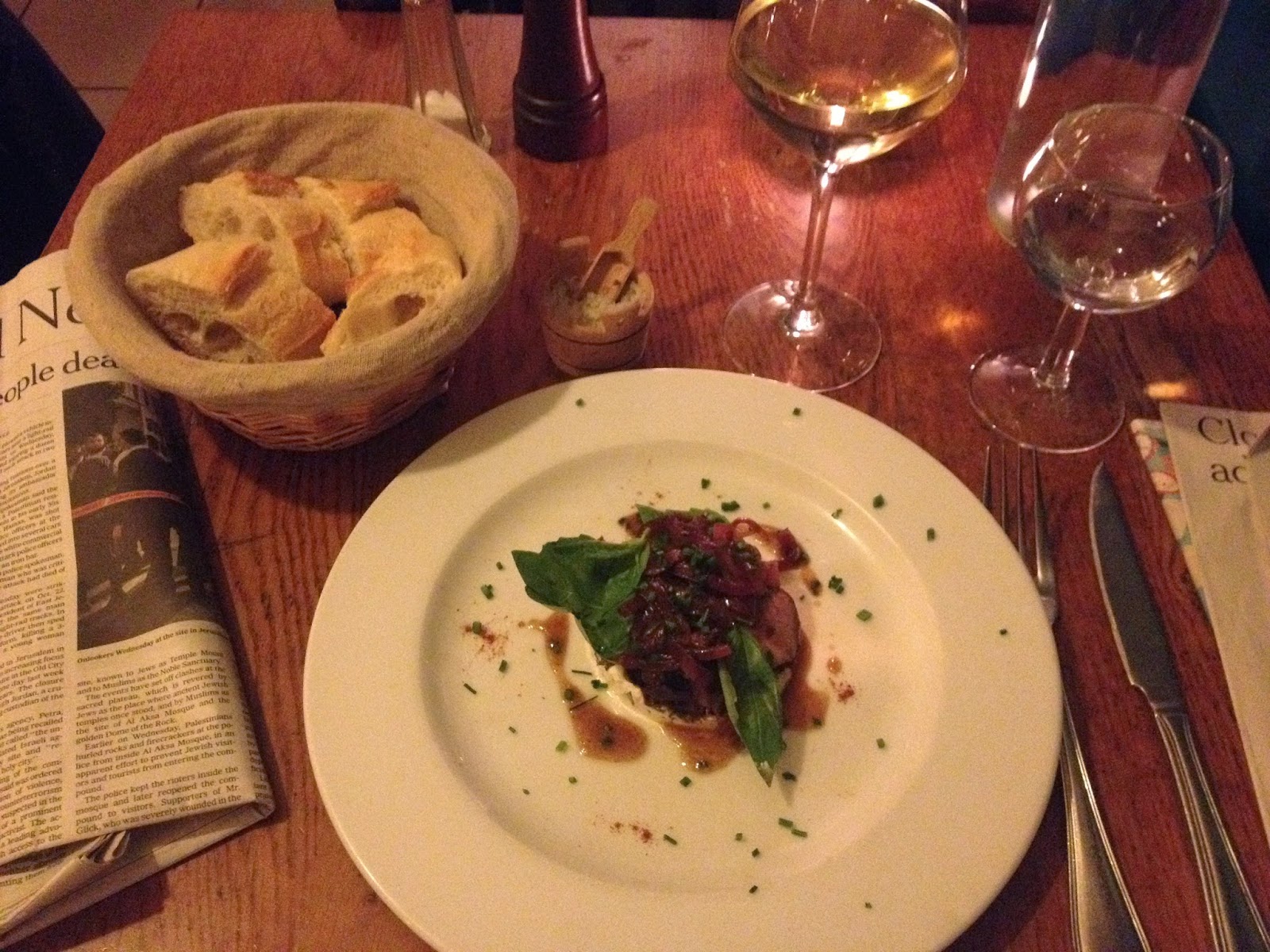 Since my main course was the pêche de jour, I ordered a glass of the Bourgogne, which was dry and fruity.

In this case, the pêche does not refer to peach or sin, but rather to fish: a nicely prepared filet of bass, with crispy skin over a risotto topped with sauteed leeks, herbs, a creamy sauce, and then the whole thing dusted with coriander. 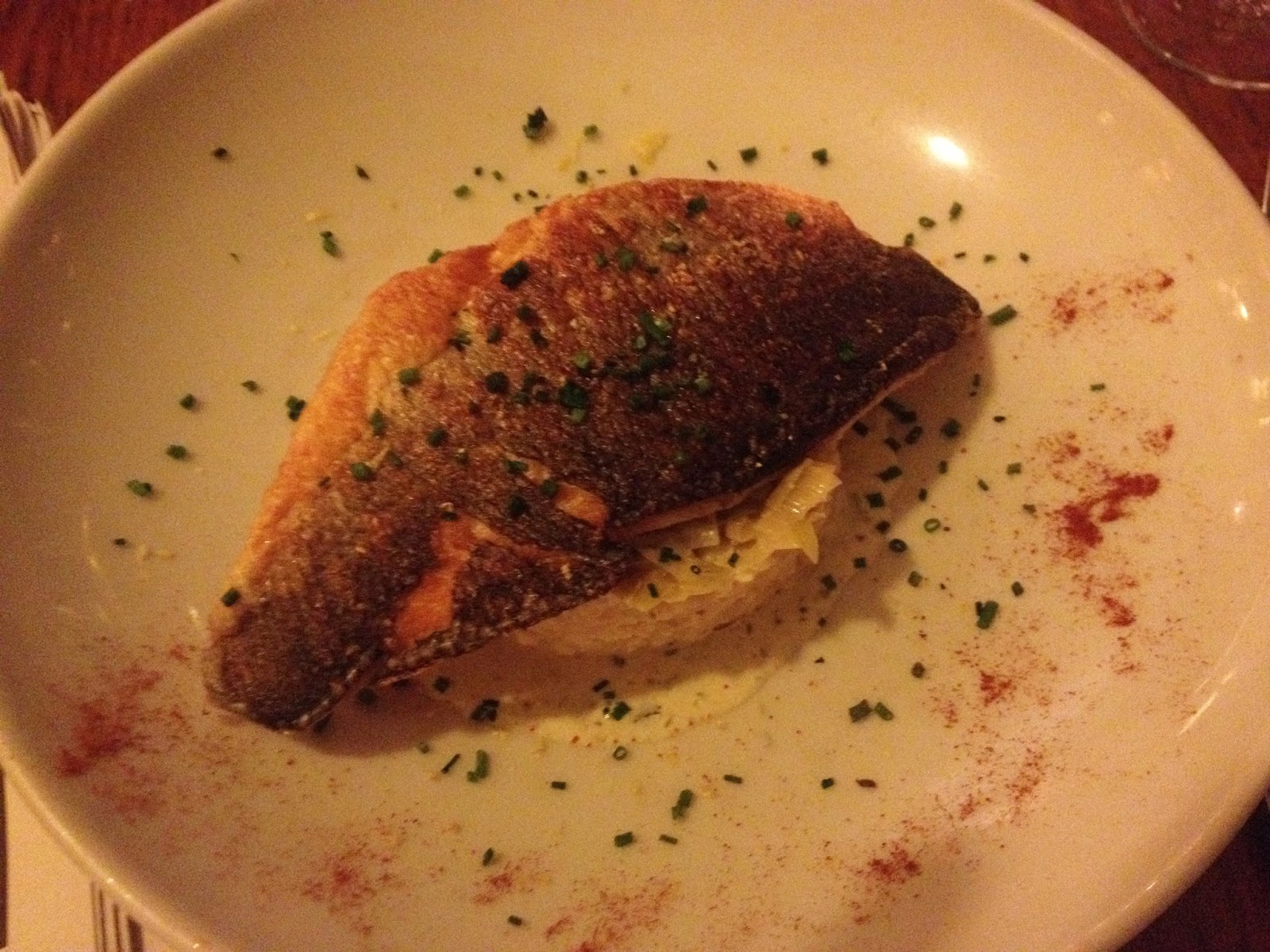 To finish off the meal, and since I spent all day walking, I ordered a dessert:  the charlotte poivre. There actually is a small piece of poive (pear) under all that whipped cream and lady fingers, but it seems merely the support for the superstructure. 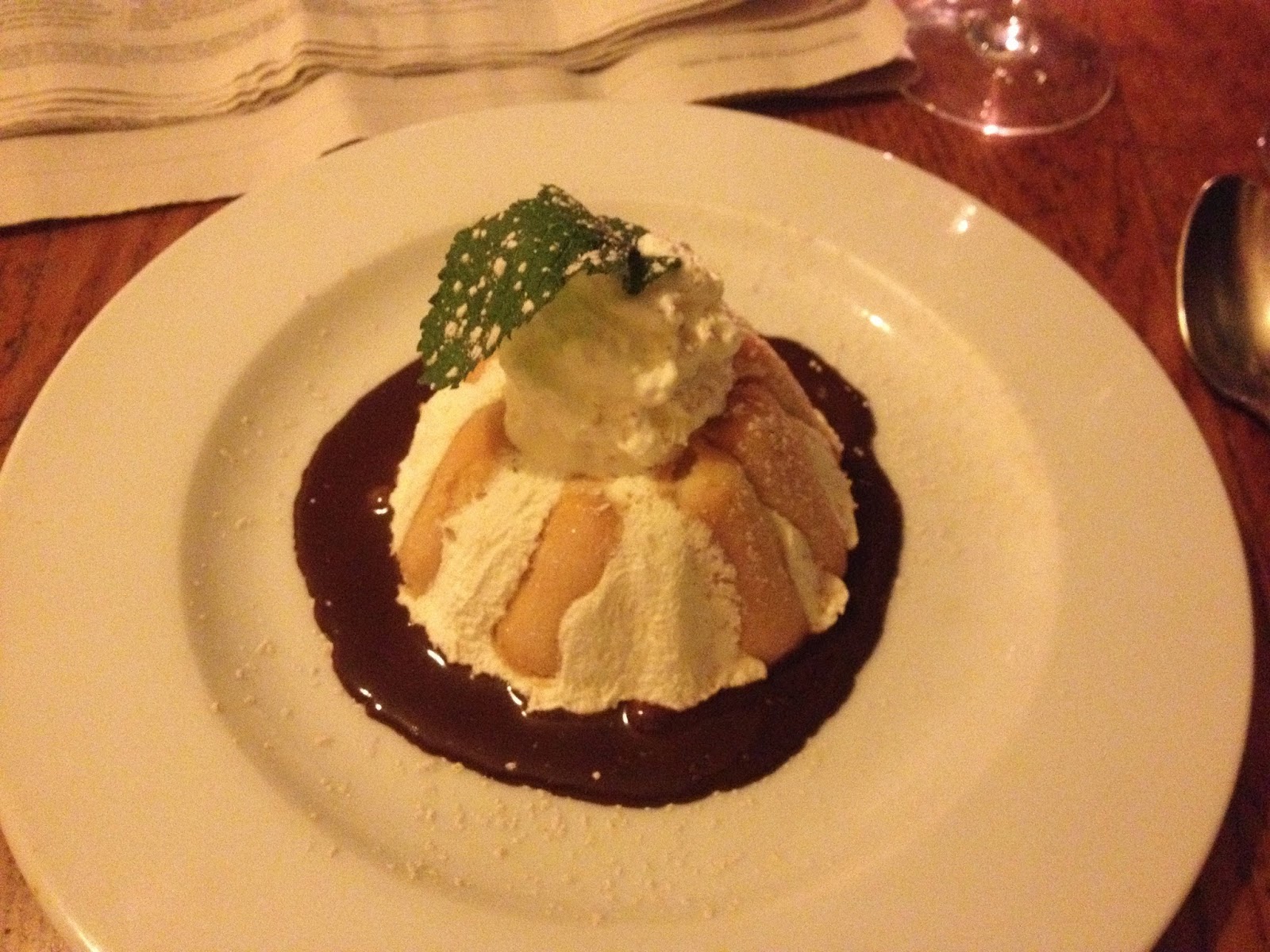 After all that, it was back to the hotel to work on my correspondence.  Tomorrow it's back to work at the BnF.