The forecasts were right:  today we had rain.  If only California could have received just a fraction of the downpour we had in New York today. 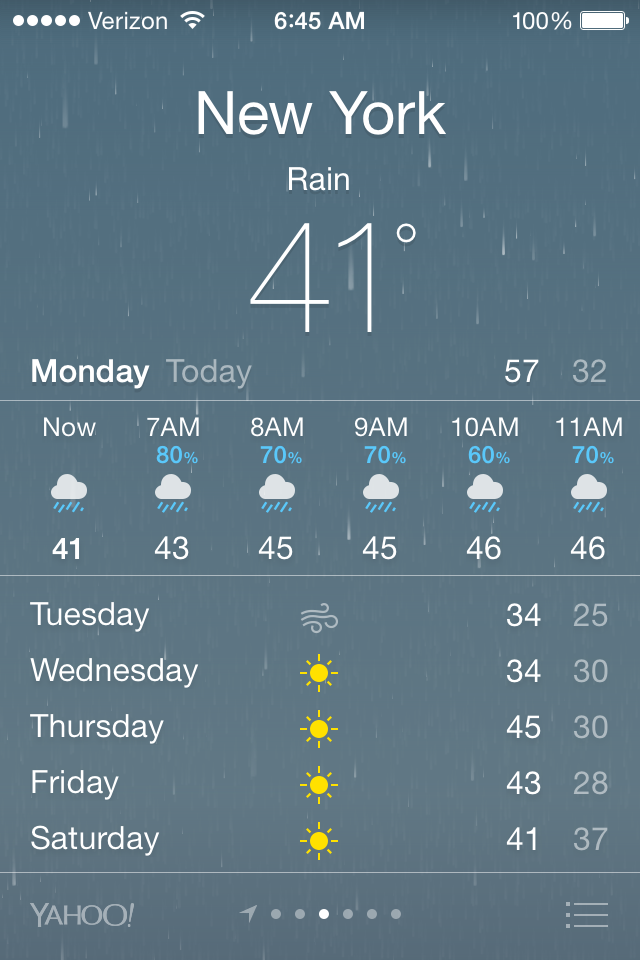 I slept slightly better last night, waking up at 5:40 am instead of 4:20 am.  At this rate, I'll be waking up at 8 am California time by the time I arrive back in California.

Since the reading room doesn't open until 9:30, I had some time to kill.  I finally managed to find the site of the Triangle Shirtwaist Co. fire. 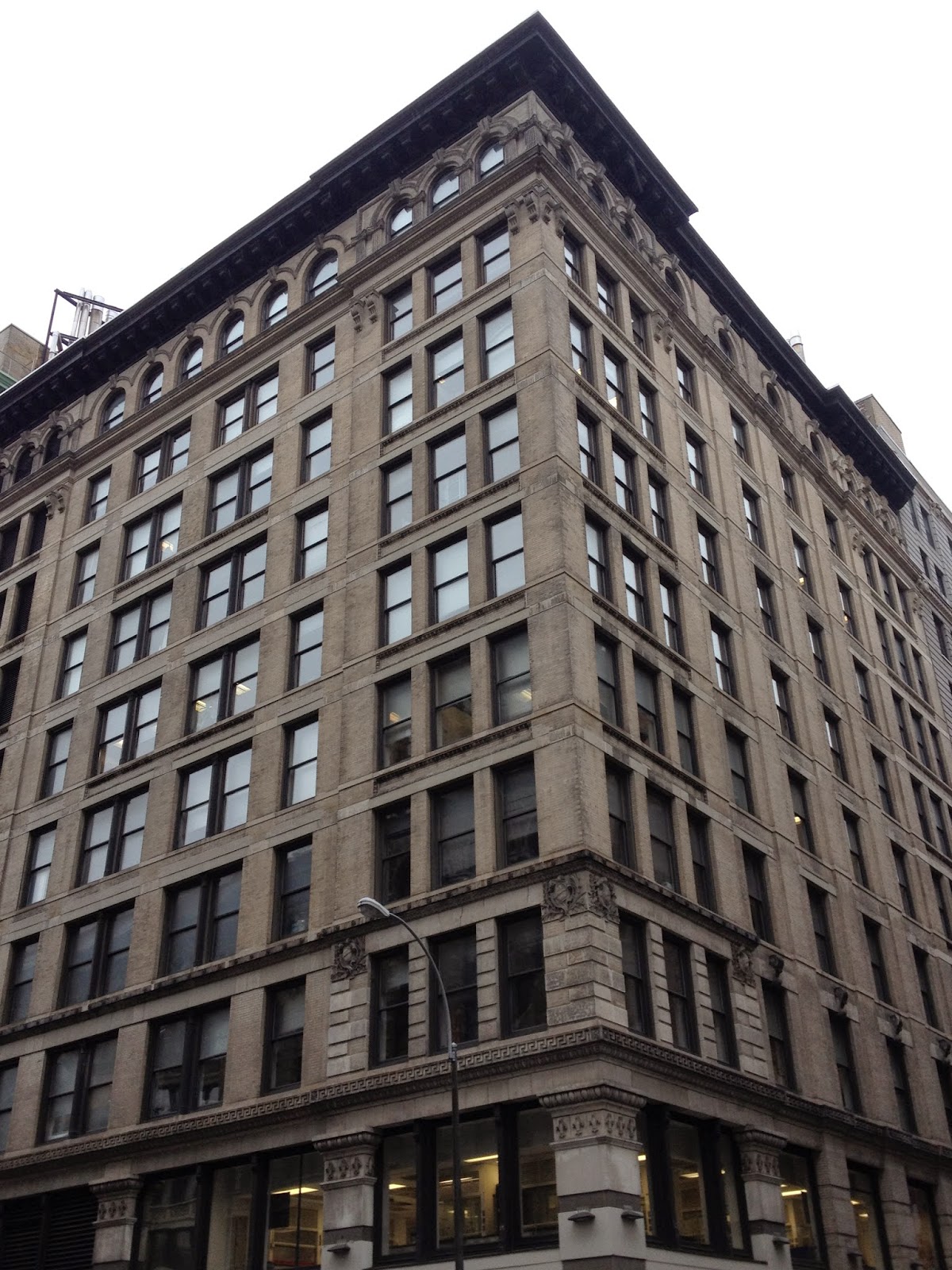 When I first started teaching modern Jewish history at a community college in Moorpark (Ventura County), I had to give a lecture on the fire.  I got out the books on it from the library and started reading them the weekend before and I ended up crying the whole time.  It was one of the worst workplace disasters in American history.  Most of those on the 10th floor (the top one), including the owners, survived by climbing over to the neighboring building.  Most of the women working one floor down, on the 9th, died.  The fire engine ladders couldn't reach that high, and everyone who jumped broke through the blankets to catch them and died on the pavement.  A union strike for better working conditions had been broken by the company a short while before the fire.  The fire not only changed workplace safety rules, it pushed the American Jewish community towards supporting unions.

Yesterday, my knee was fine, with almost no pain; today, I've been in pretty constant pain all day.  I limped my way from Washington Square where the fire was to the archives a few blocks away.  I need to make an appointment to see a doctor when I get back.

The time at the archive was very productive.  I got a hold of Schwartzbard's Hebrew language autobiography and copied the relevant pages.  Tomorrow, I'm going to start going through the Tcherikower Archives

At lunch, I headed down the block and ended up at Breads Bakery, which I'm convinced is Israeli owned and operated.  I heard so much Hebrew, not only from customers, but also from people involved in running it, and they were selling an Israeli book, in Hebrew, on how to bake bread at home. 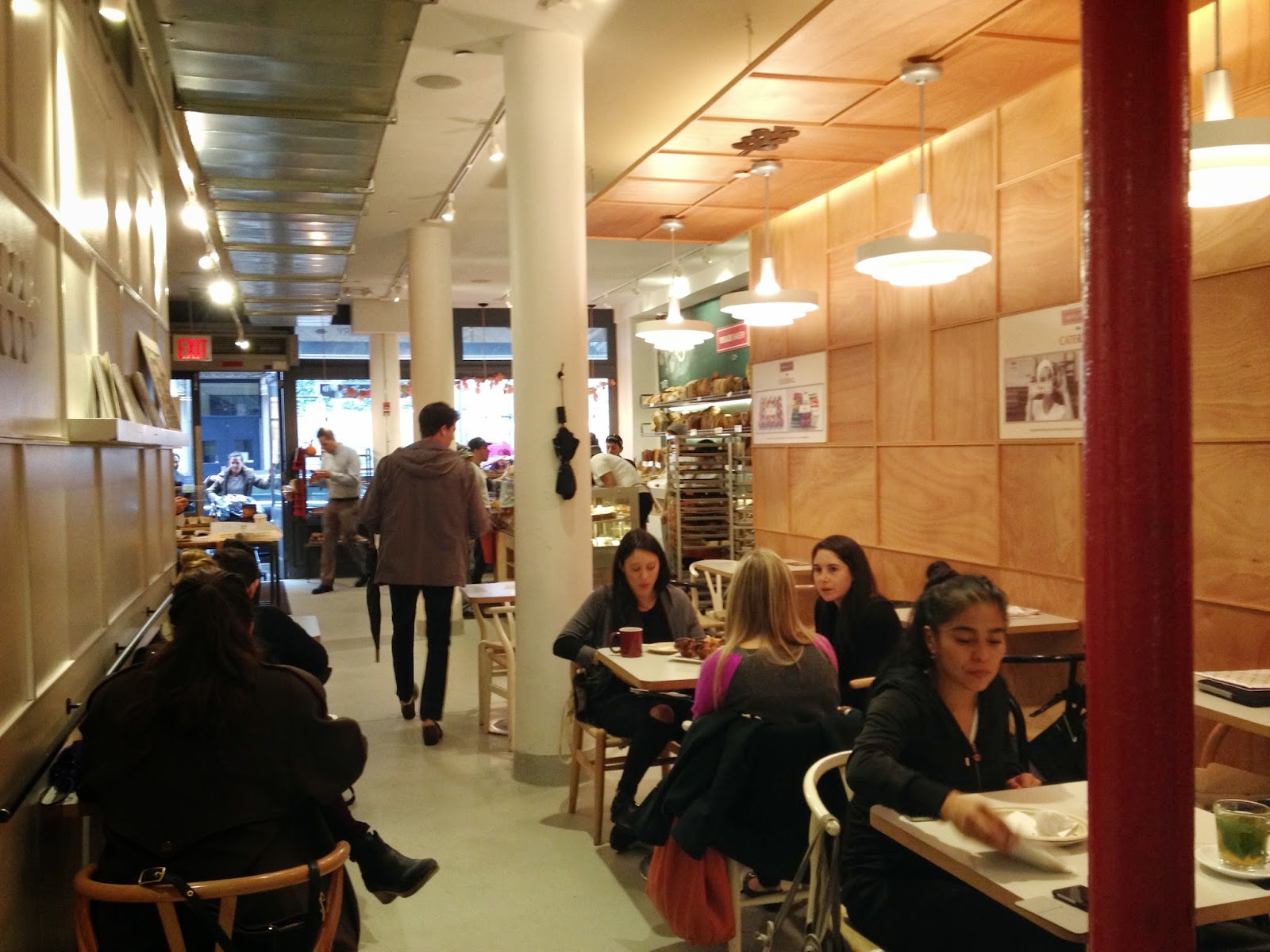 I had the Mediterranean quiche, which was quite good, followed by this "creme brûlée" pastry, which really was nothing more than a vanilla custard in a puff pastry.  It was still very good. 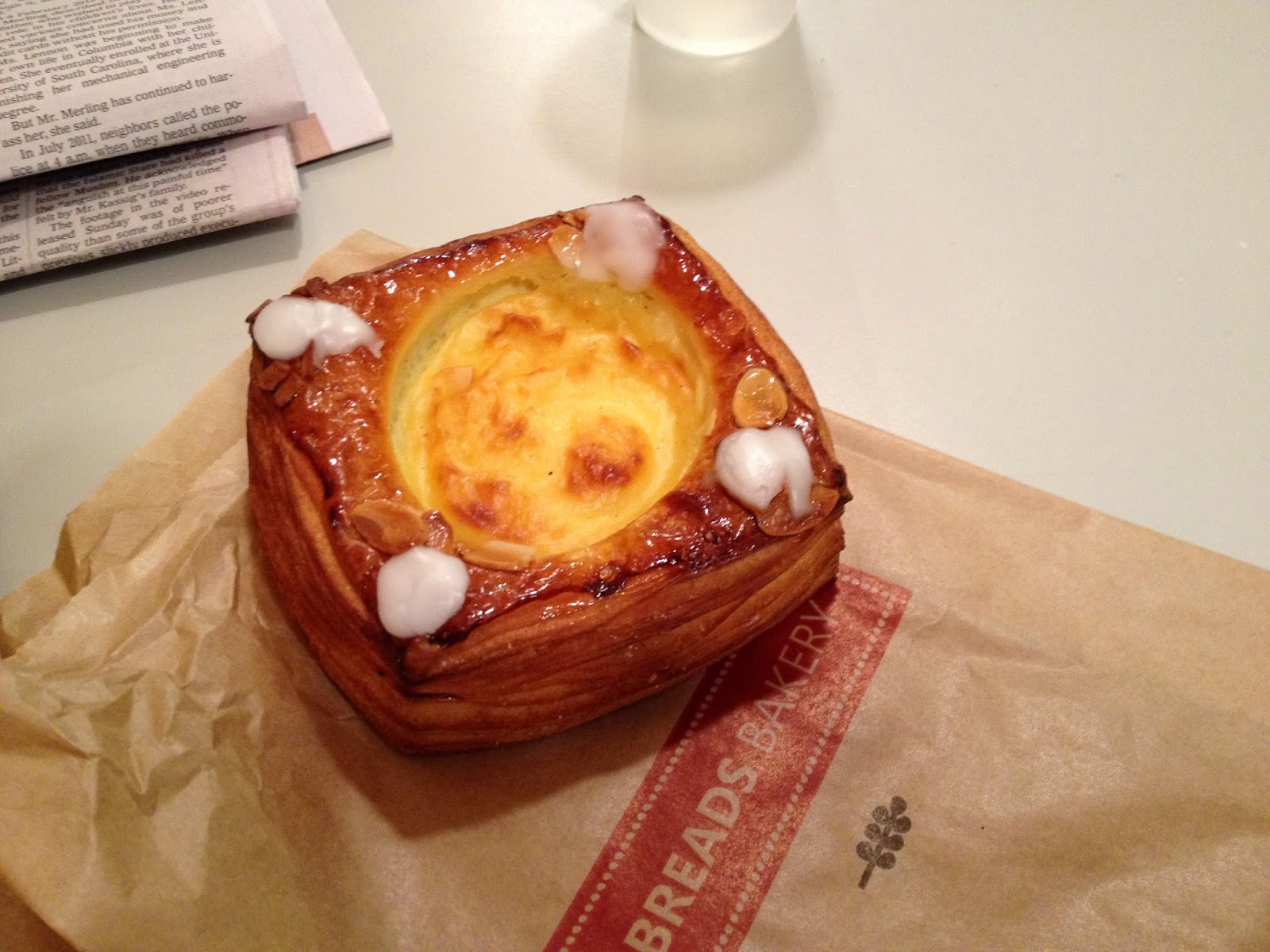 Back to the archives for more work while torrential rains fell.  The reading room is on the top floor, and the rain got so loud on the roof that we all stopped working and looked up at it.  By the time I left, though, the rains had diminished to a light drizzle.

Since we're expecting something called a "polar vortex" tomorrow, I headed off to Macy's and bought a scarf.  I don't buy scarves very often. 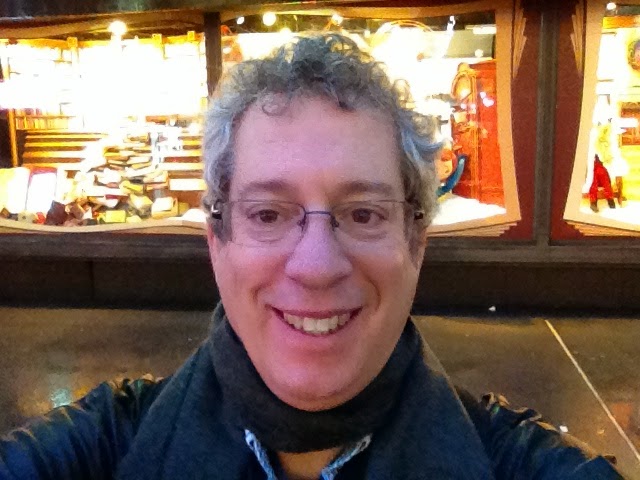 I stayed in the neighborhood tonight, for dinner.  That neighborhood, by the way, is on the border between the Flatiron District and Gramercy Park.  I went to a placed called "Friend of a Farmer," which features locally grown and produced food.  I started off with the lentil and vegetable soup, followed by the duck and date meatballs, and finally the pecan pie.

While the food was very good, what I'm noticing right off the bat as the most important difference between French and American restaurants is the portion size.  The French portions were just right; I didn't leave anything over and I didn't feel bloated afterwards.  Each course at "Friend of a Farmer," on the other hand, could have served two people just as well.

I tried to snap a shot of the duck meatballs, but the lighting in the restaurant was extremely dim. 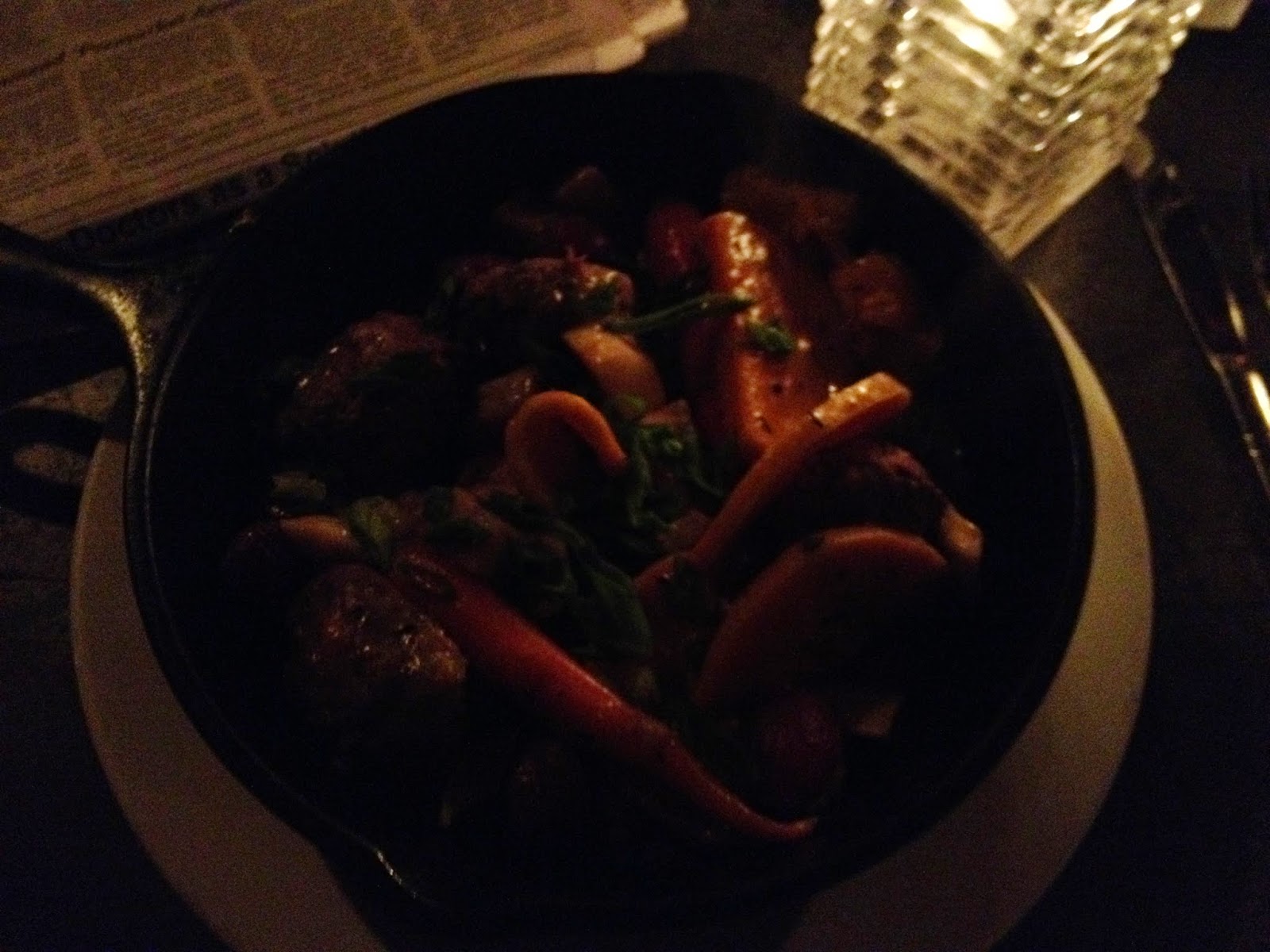 Another thing I noticed is the age of the patrons in the restaurant.  Almost to a person (that person being me), they were all in their late 20s to very early 30s.  If this were Washington, I'd assume they were all associate attorneys in corporate firms or working as lobbyists; I'm not sure here.  At least one person was loudly talking about advertising.

That's another difference with Paris:  Americans, whether in restaurants or on the subway tend to be much louder.

On the way back, the drizzle had stopped.  I saw a great view of the Chrysler Building all lit up the distance, way up Lexington Avenue. 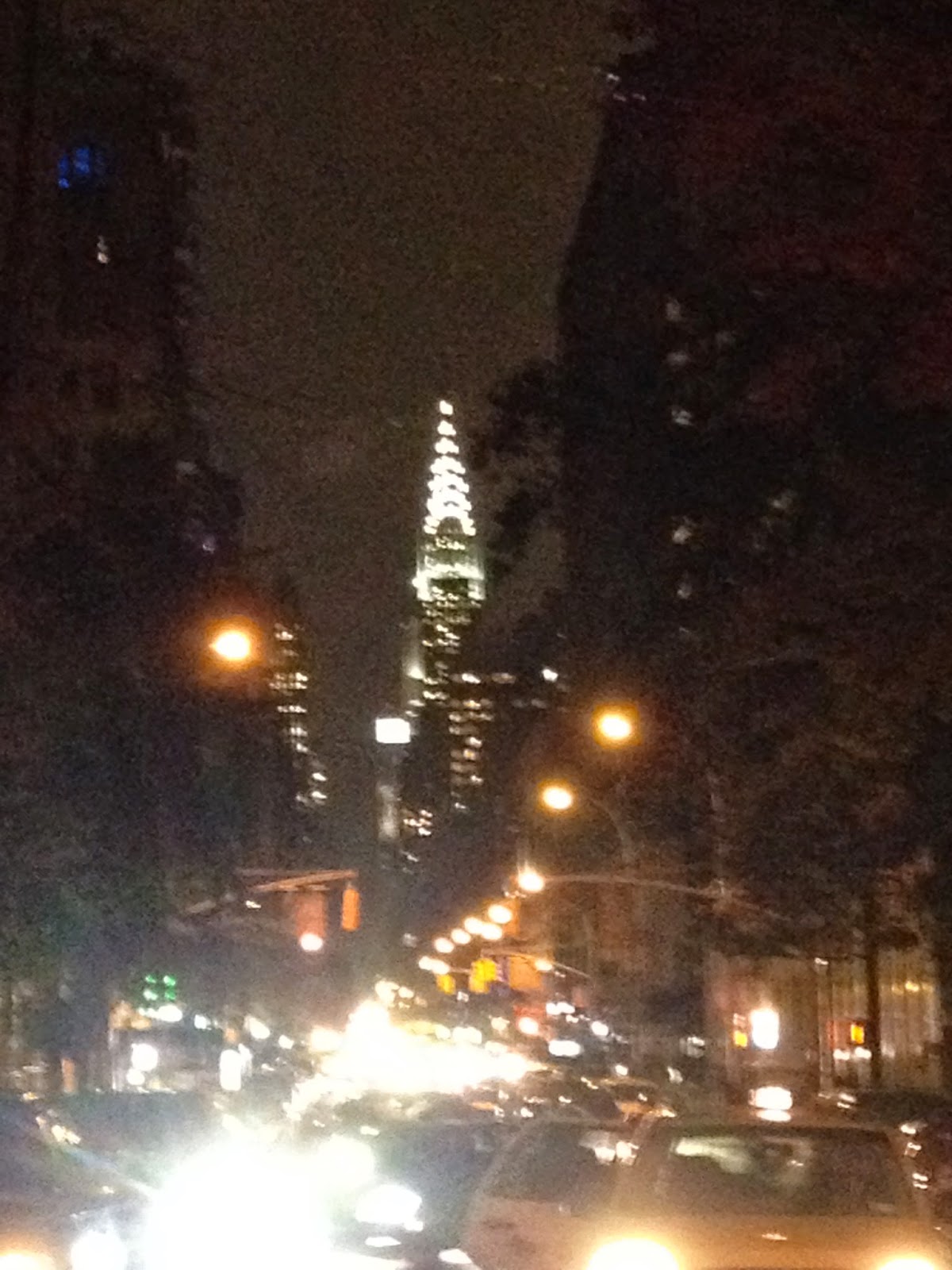