First off, I finally succeeded in locating copies of an important daily newspaper I need for my research.  Le Quotidien was published in Paris from 1923 until around World War II, but when I searched for it in the BnF catalog, I could only find the version published in Senegal.  Part of the problem, I thought, was the name:  it means "the daily," and this was a phrase that showed up in the subtitle of many French daily papers.  As a result, any catalog search for "quotidien" pulled up all these false hits.

One false hit turned out to provide a lead, though.  It was a short-lived paper whose raison d'être was to attack the editorial board of Le Quotidien.  That provided me with the name of the chief editor.  I logged on to the World Cat (short for World Catalog) database via my home library's webpage and started searching, using the editor's name.  Finally, up popped Le Quotidien.  But what was that on the side of the page?  A link to the BnF catalog?  I clicked on it and sure enough, I was looking at the BnF entry for Le Quotidien.  The newspaper hasn't been digitized and is only available on microfilm, and, this is the key for the problems I had, someone in the catalog department made a mistake and didn't enter it make searchable through the BnF's database.

I went to the librarian I had worked with earlier and showed her the newspaper was in the BnF's collection.  She searched a couple of times but couldn't pull it up the normal way, which showed to her that I was right, it's an error in the BnF's database.  It's possible they might some day fix it, but then again, the main elevators at the BnF have been broken for seven weeks now, so I don't think that's going to happen any day soon.

The bottom line is that I've ordered the volumes I need for Wednesday when I go back (the library is closed today for Armistice Day).  While much of the research I've been doing here could have been done (though not as easily) at home (since a lot of the newspapers have been digitized), this has to be done on location.  I should have no trouble finishing this by Saturday when I leave.

This, by the way, is where I've spent most of my trip; the history reading room at the BnF: 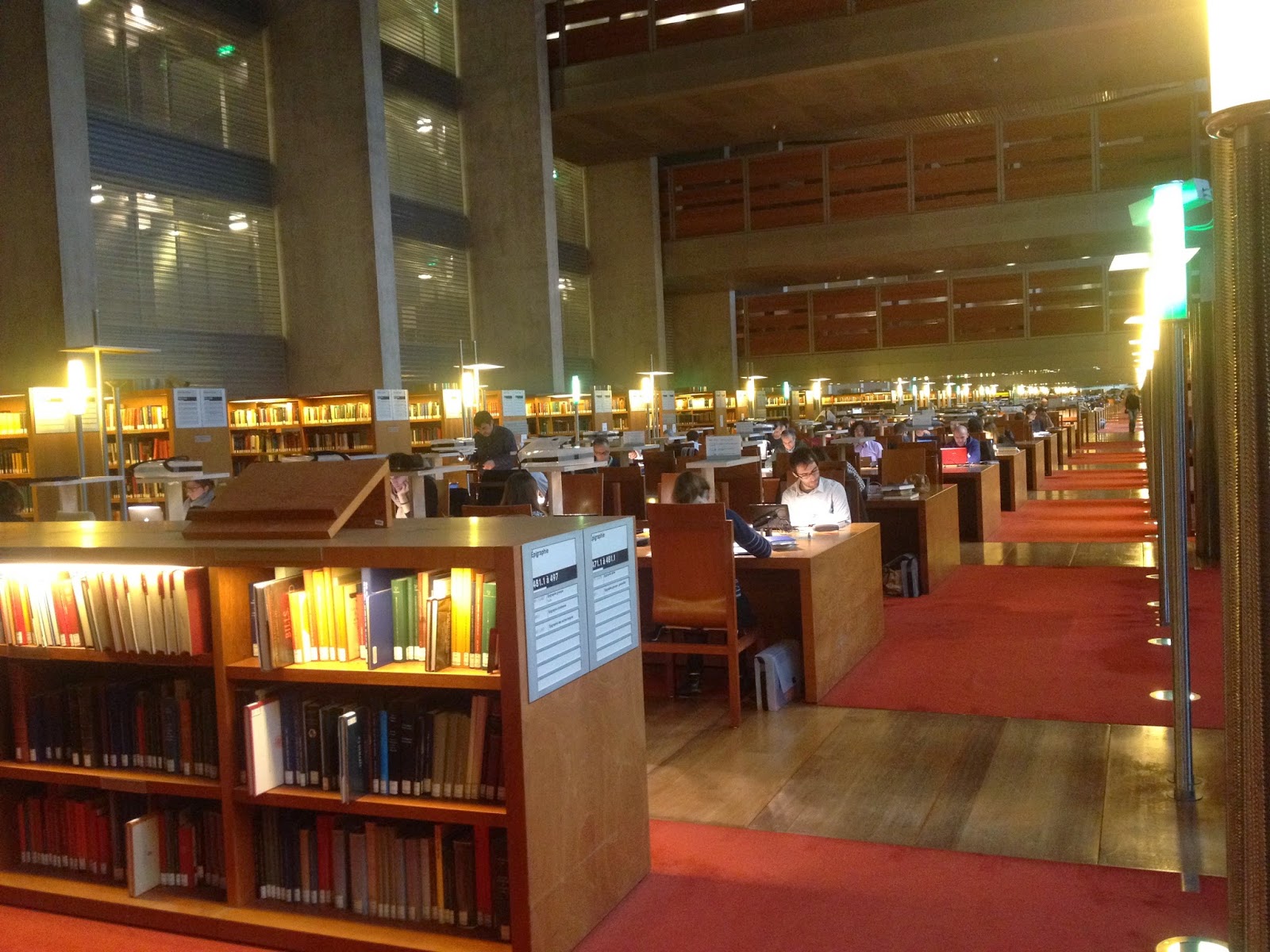 Since the BnF reading rooms are closed Monday mornings, I went instead to the Musée de Cluny, which is devoted to medieval art.

One room, for example, had some stained glass windows from St. Chapelle, which have been restored.  Since it was too dark to see any of the windows when I was in St. Chapelle for the concert, this was particularly nice. 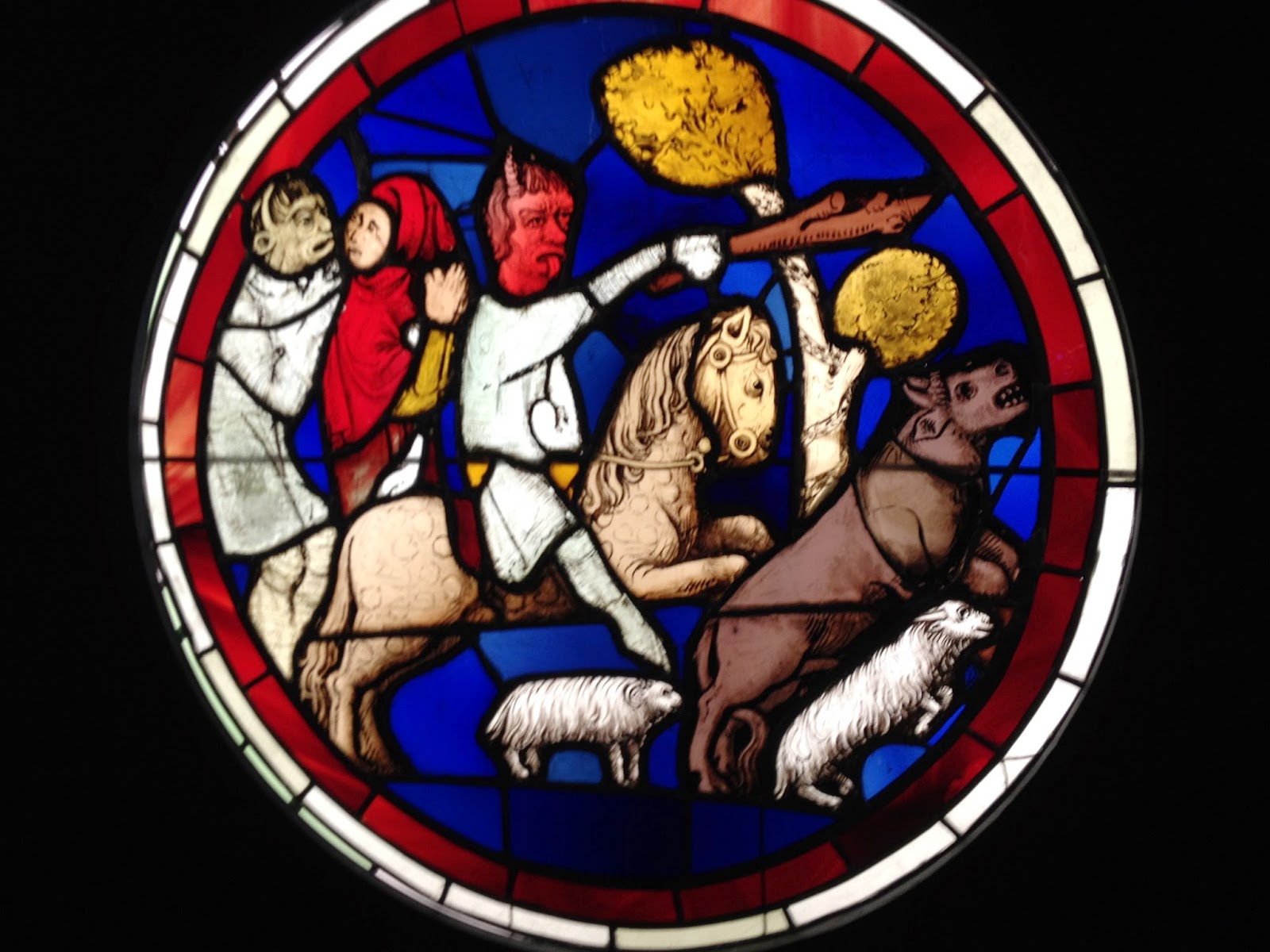 When I posted this to Facebook, the website asked if I wanted to "tag" images of my friends.  I'm not sure who it thinks my friends are.  This window depicts the devil tormenting Job.

The collection of tapestries from around 1500 called "the lady and the unicorn" were amazing.

Five of the tapestries depict each of the five senses.  This is sight: 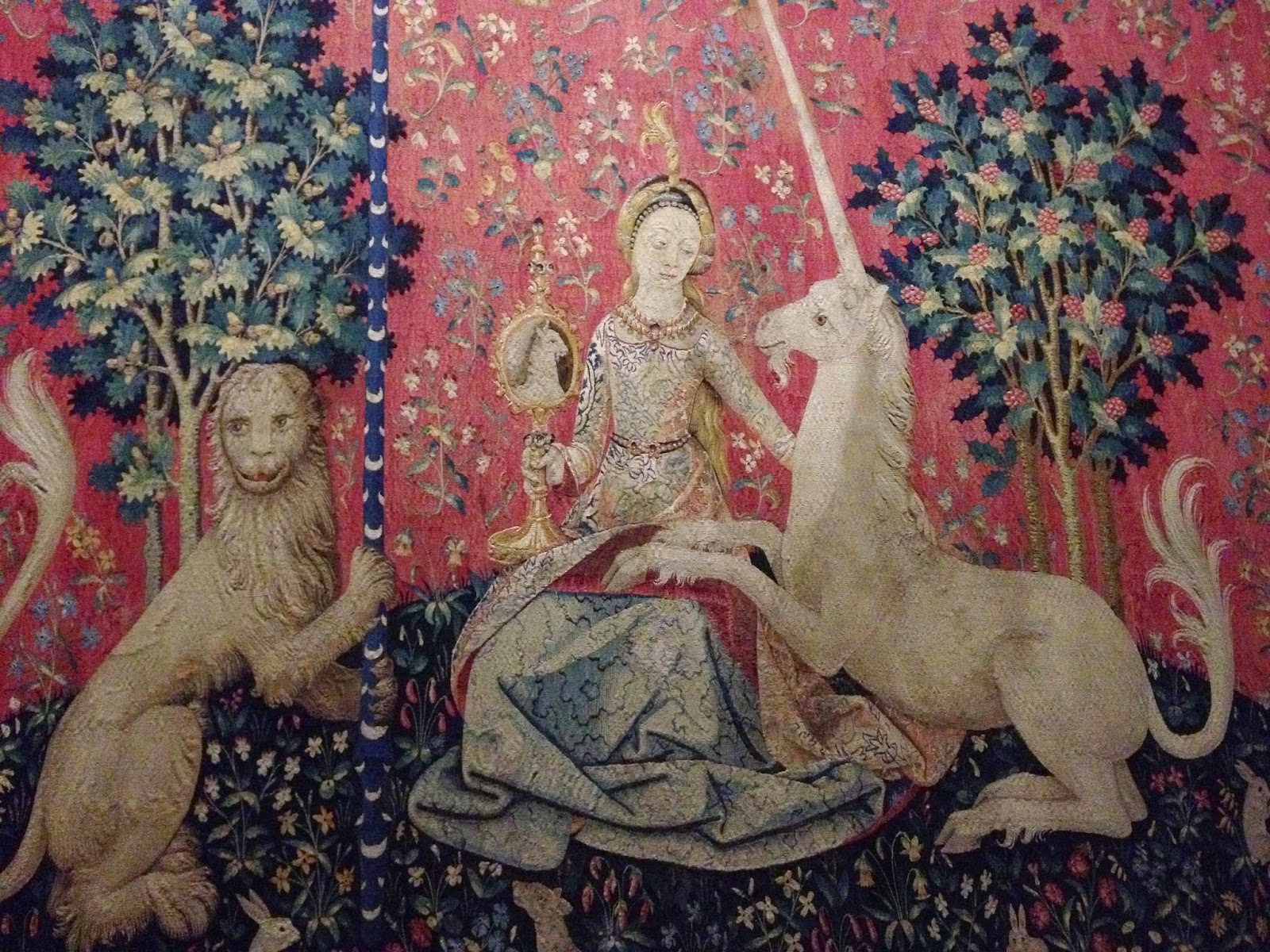 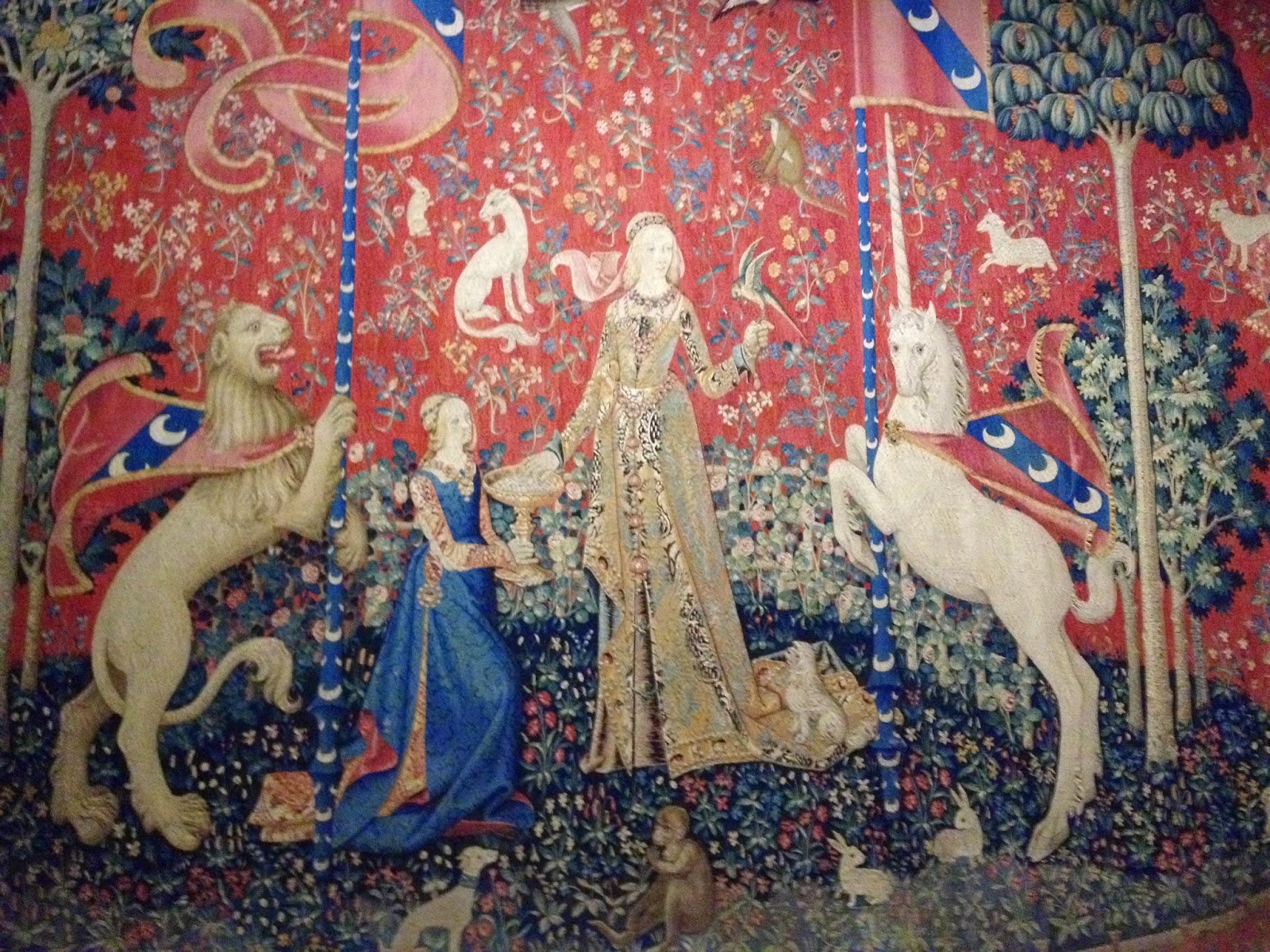 The final panel is called "my sole desire;" scholars aren't sure exactly what it's meant to represent: 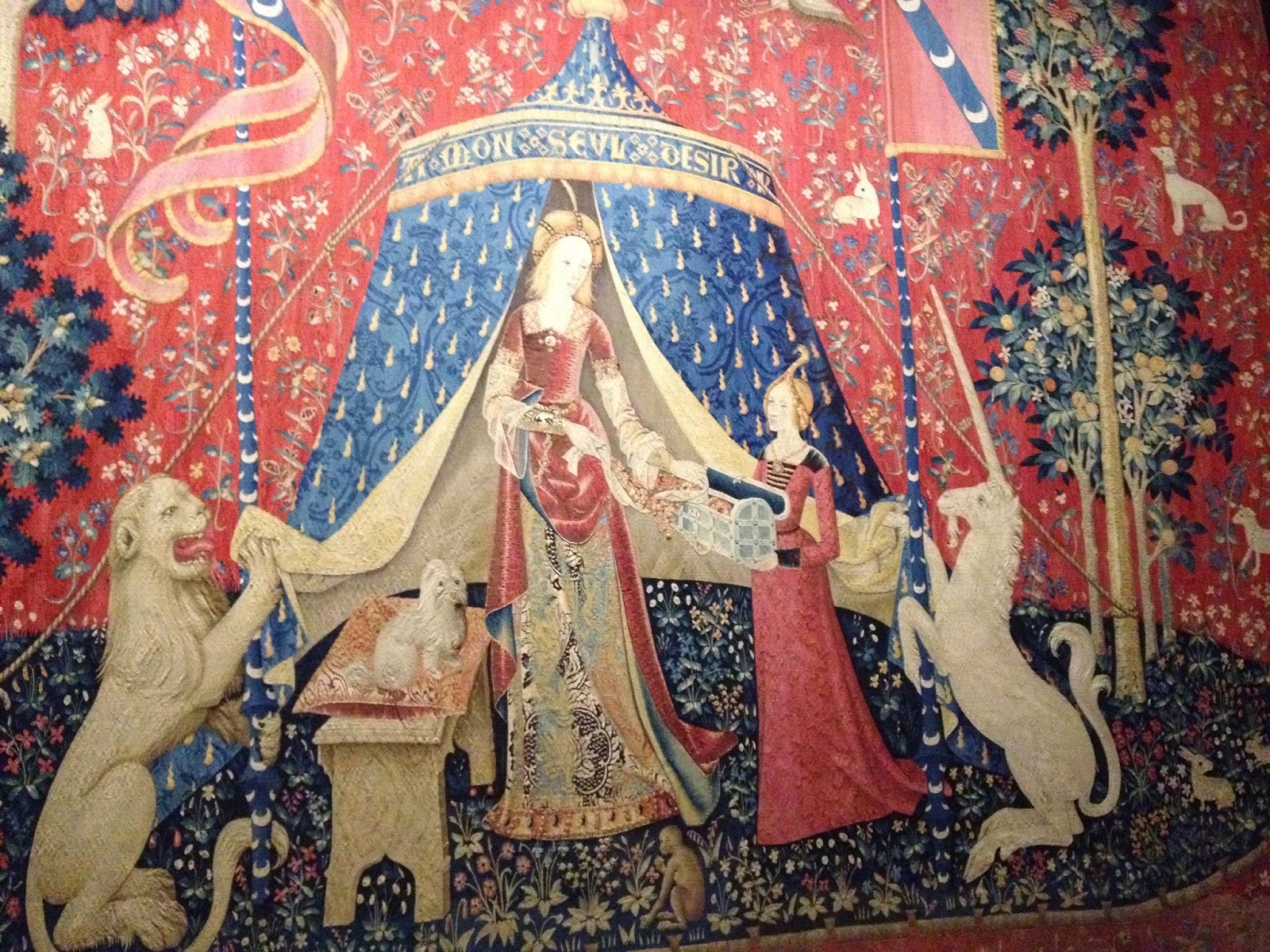 The tapestries contain all sorts of great details about plants and animals: 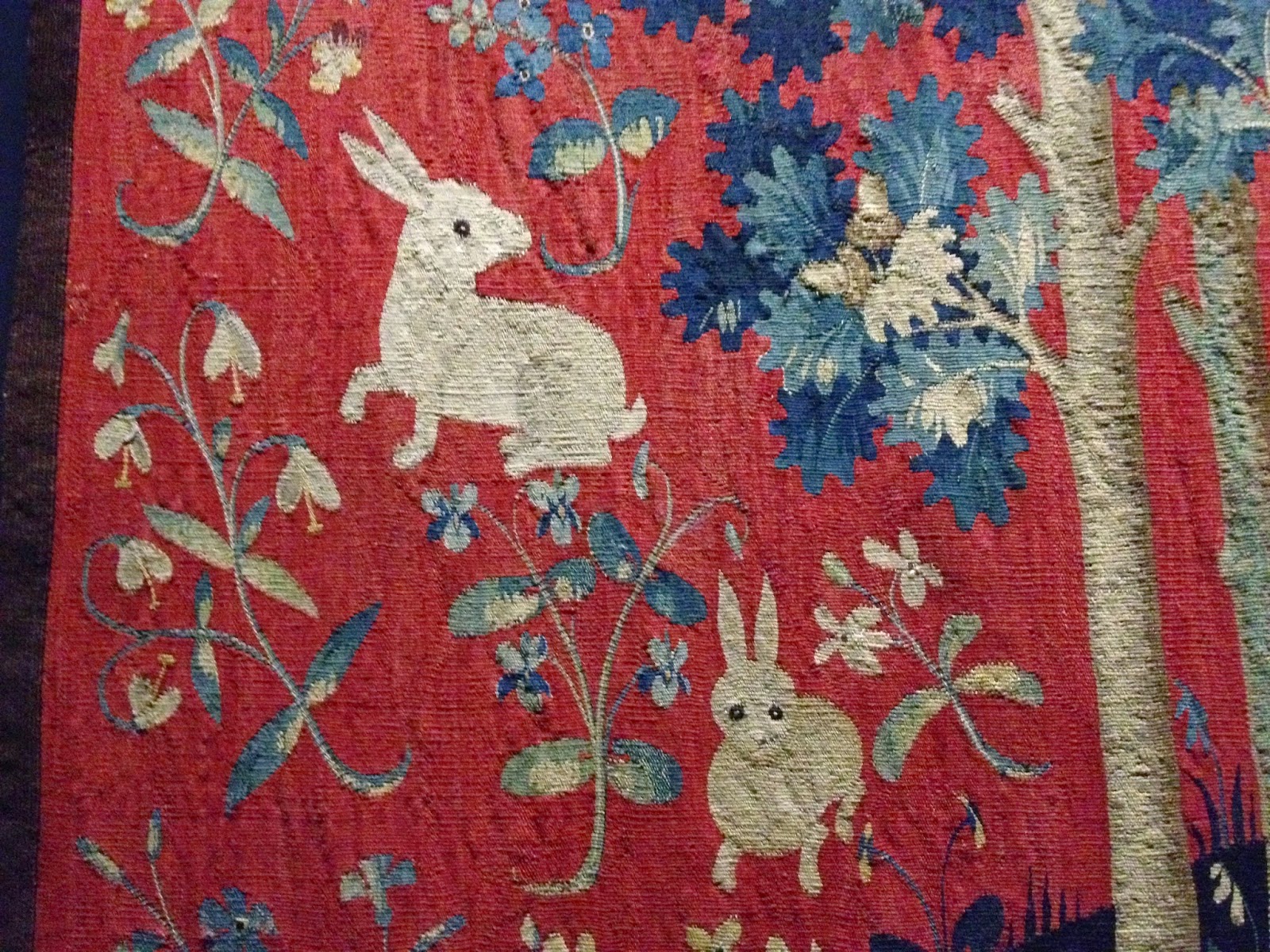 While I was there, a guide was taking a group of five year olds through, pointing out the various items in each tapestry.

For lunch, I walked to Gerárd Mulot and bought a sandwich and a tarte tatin: 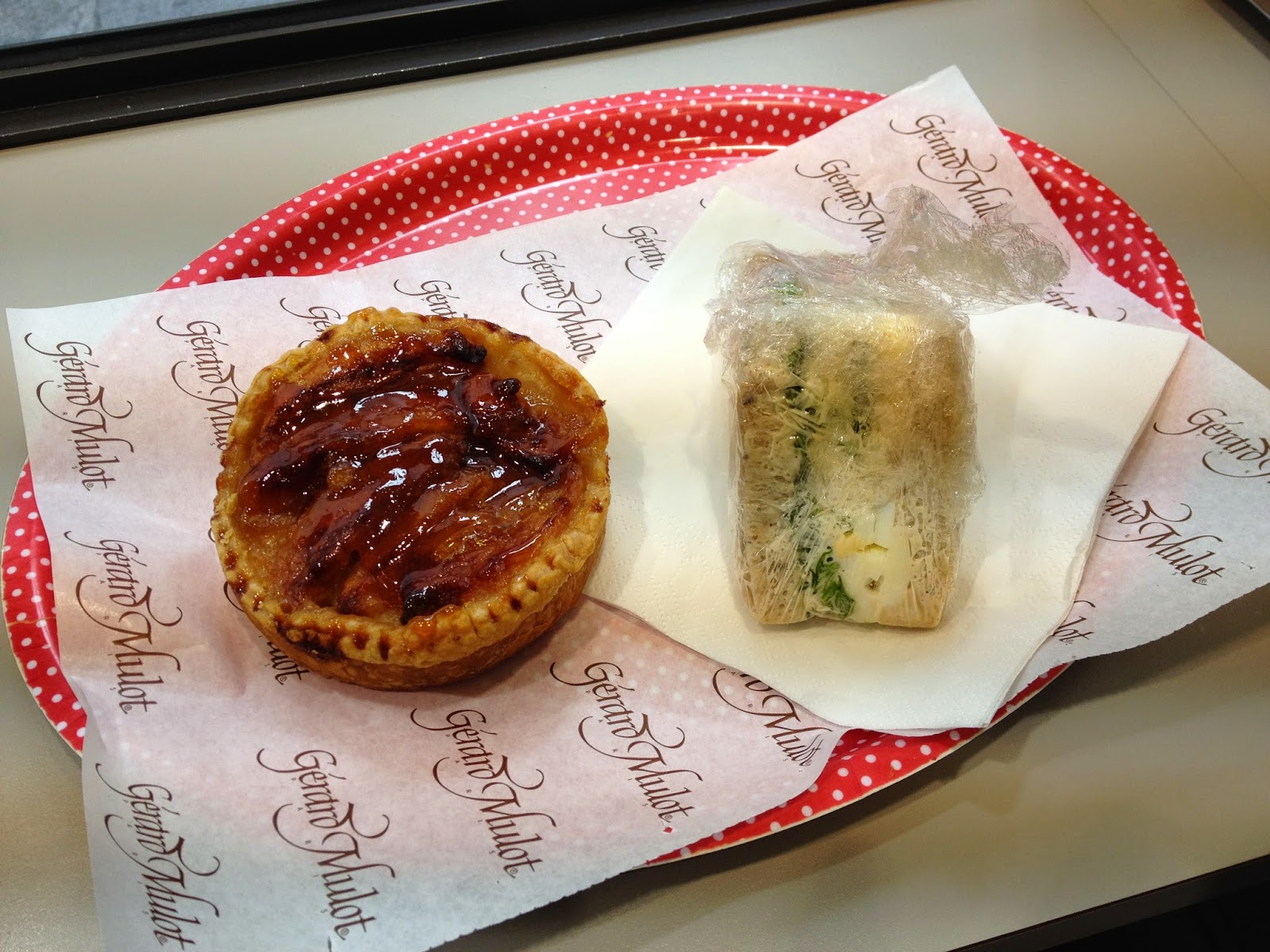 The tartin was delicious.  The sugar had melted, caramelized, and then formed a hard, cracked sugar shell on top, somewhat reminiscent of a creme brulée.  That sandwich was quite small, so I ordered a second dessert: 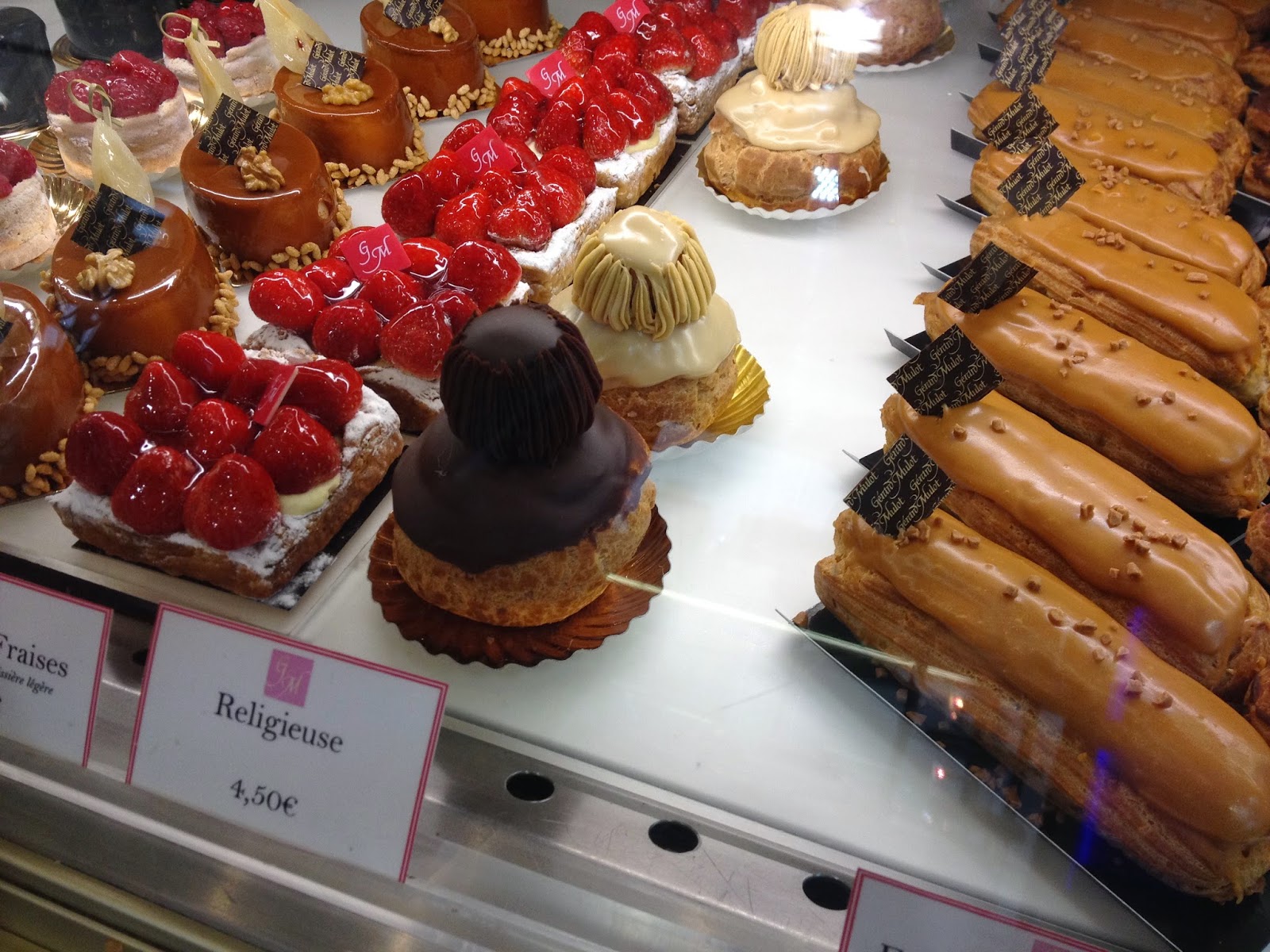 It's called a "religieuse" and it is like a two-tiered snow man made from pâte à choux dough.  The top and bottom are then filled with pastry cream (either chocolate or mocha) and then glazed (chocolate or mocha).  I got the chocolate one.  It was very good, and very, very rich.  This helped since I didn't have anything to eat for 7 more hours afterwards.

For dinner, I met a dear friend of my uncle's named Mumu.  She runs a clothing boutique in Montmarte and she had invited me to join her and her husband Yaron at a restaurant in their neighborhood. 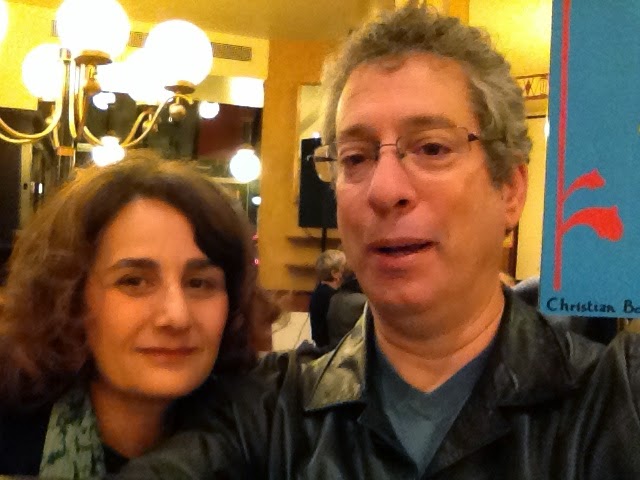 To my surprise, this turned out to be an awards ceremony for the Wepler Prize in Literature, which is a private award given out every year.  The place was absolutely packed. 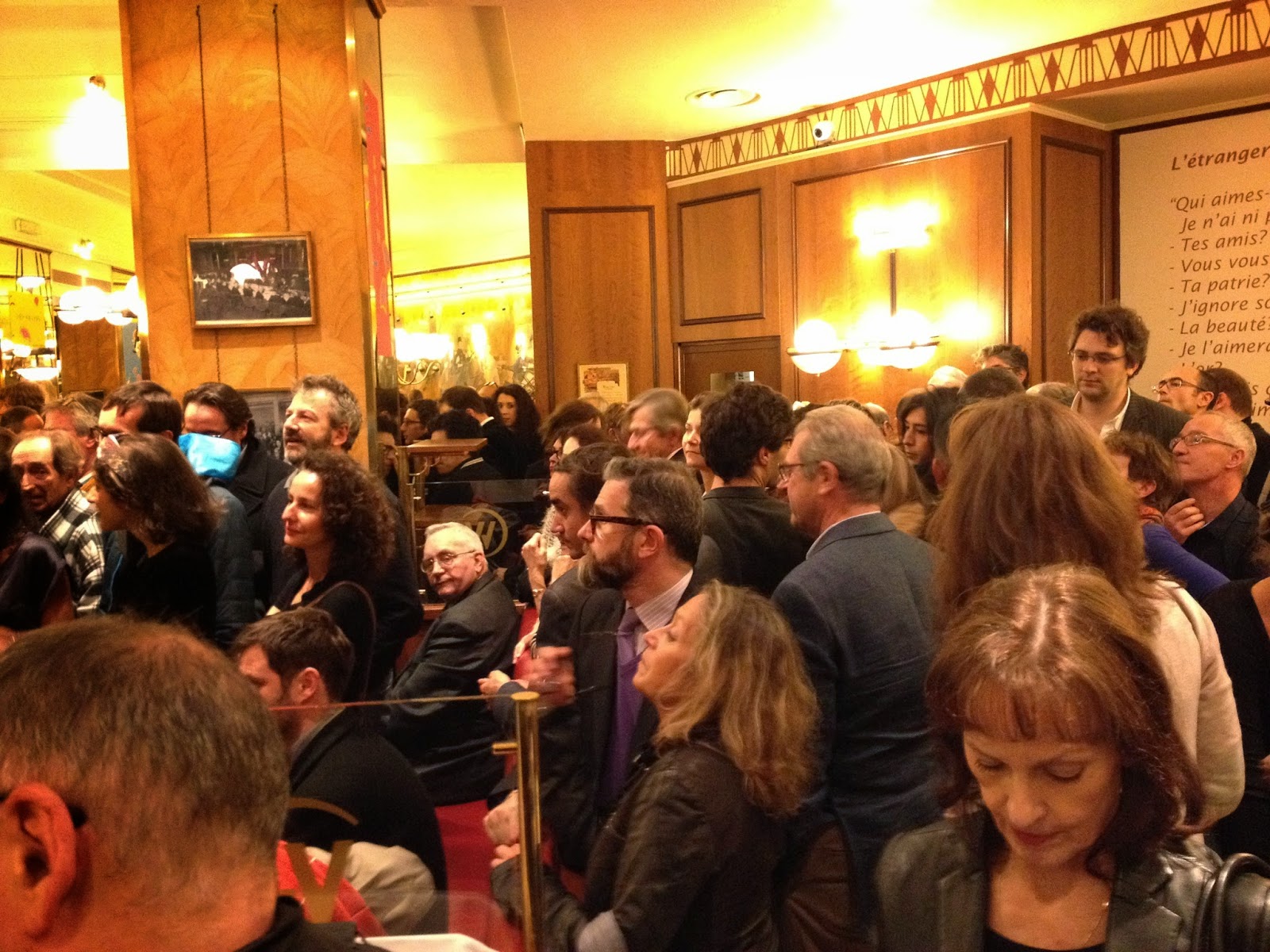 After about an hour of speeches, they served the champagne and hors d'ouvres and all hell broke loose as people crowded about.  After living in Israel for several years, I'd honed my crowd piercing skills so I managed to snag two glasses of champagne and several hors d'ouvres from passing trays.

Afterwards, we met up with Mumu's husband at a small cafe near their home.  Yarom's native language is Hebrew, though his family moved to France when he was a small child.  Mumu didn't speak much English, my French is terrible, and Yarom's Hebrew was weak.  The result was a confusing mish mash of languages where I kept switching from French to Hebrew in order to figure things out.  At two points, my brain got so confused, I had to stop because I couldn't remember which language I needed to use.

Here's Mumu and Yarom.  Sometimes, they told me, when Frenchmen are confused by his Israeli name, they just tell people it's Jerome (which sounds very similar in French): 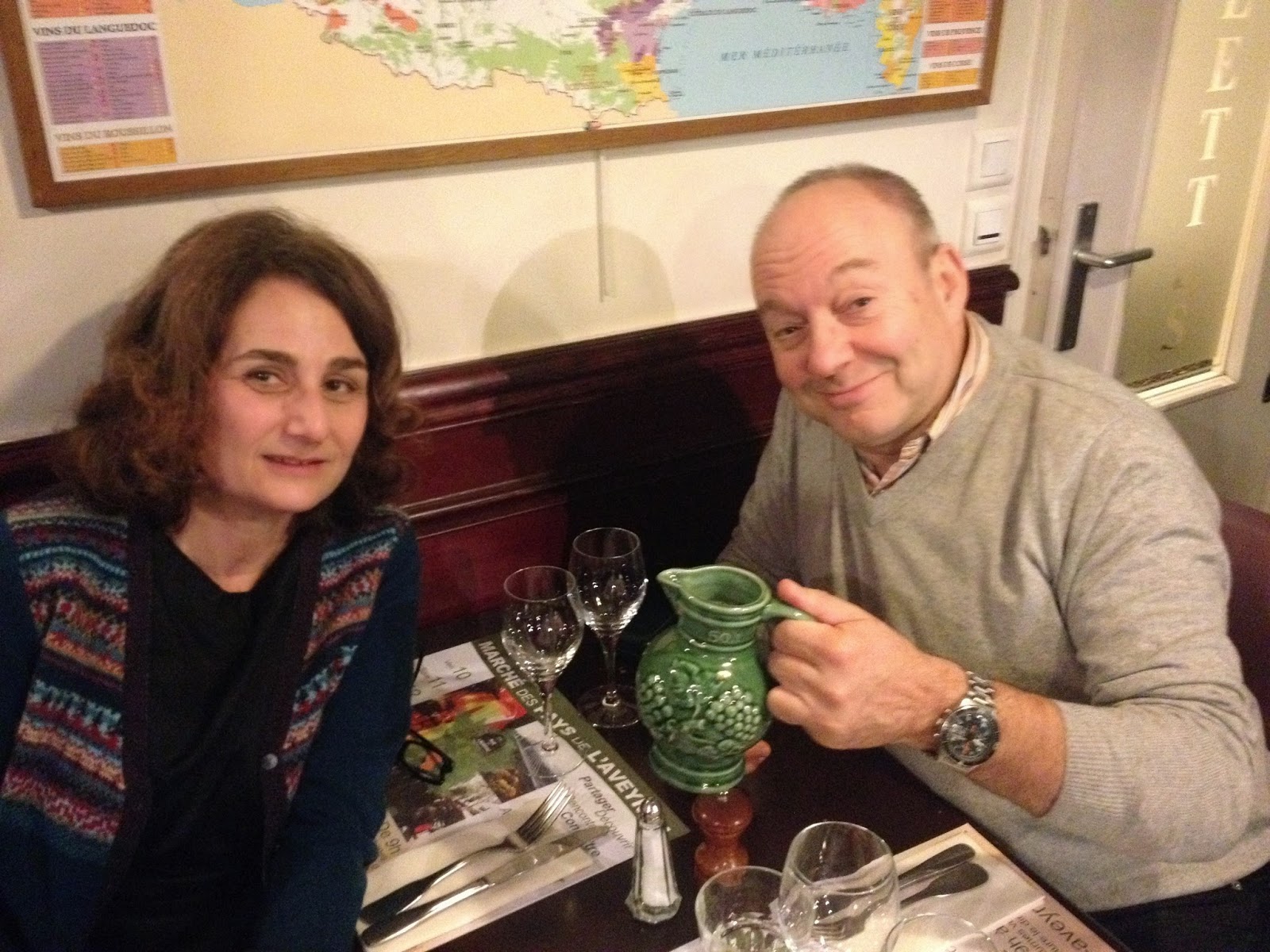 And here's Mumu and me again: 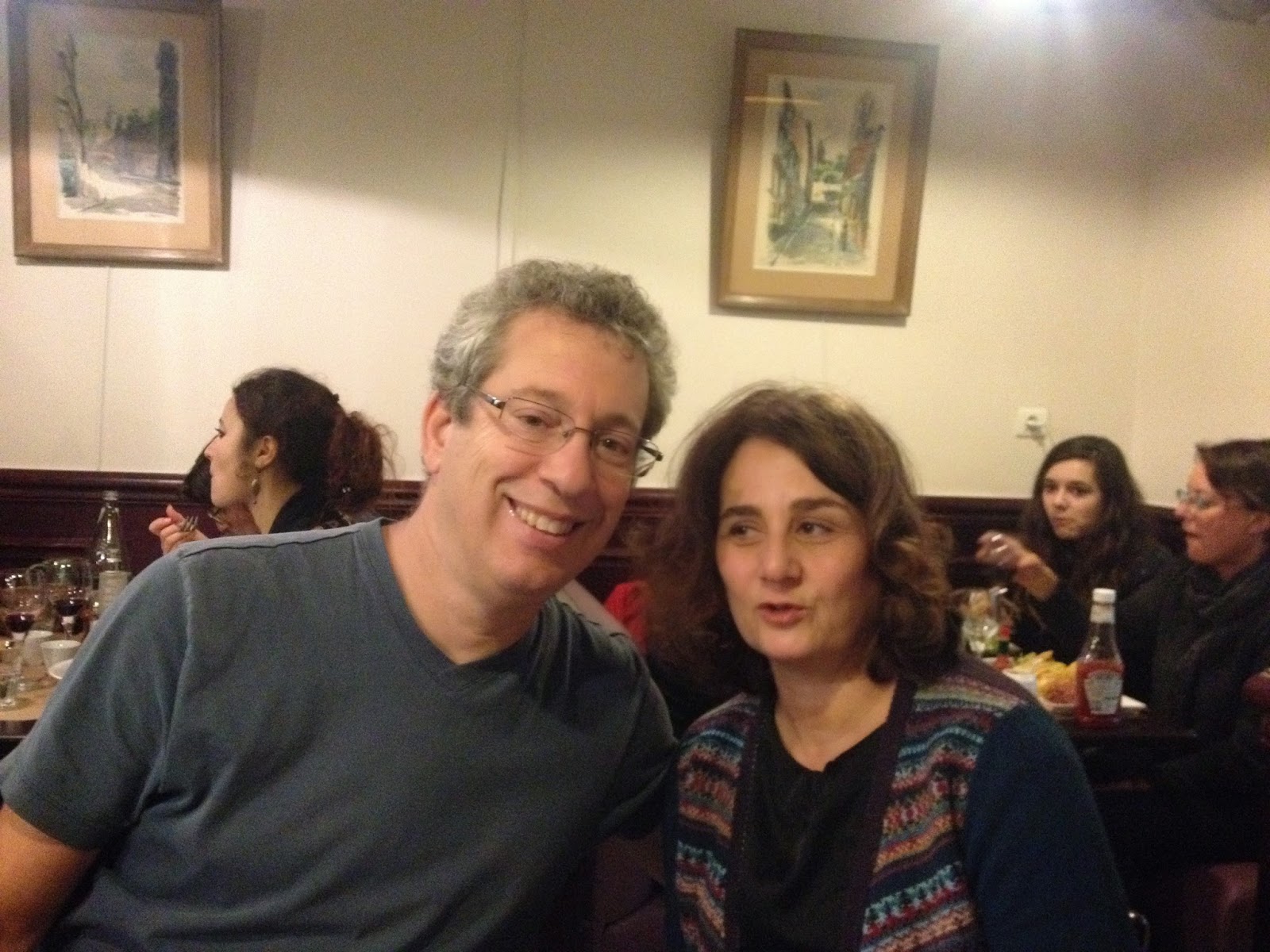 I did have only one dessert with my meal, a baba au rhum. 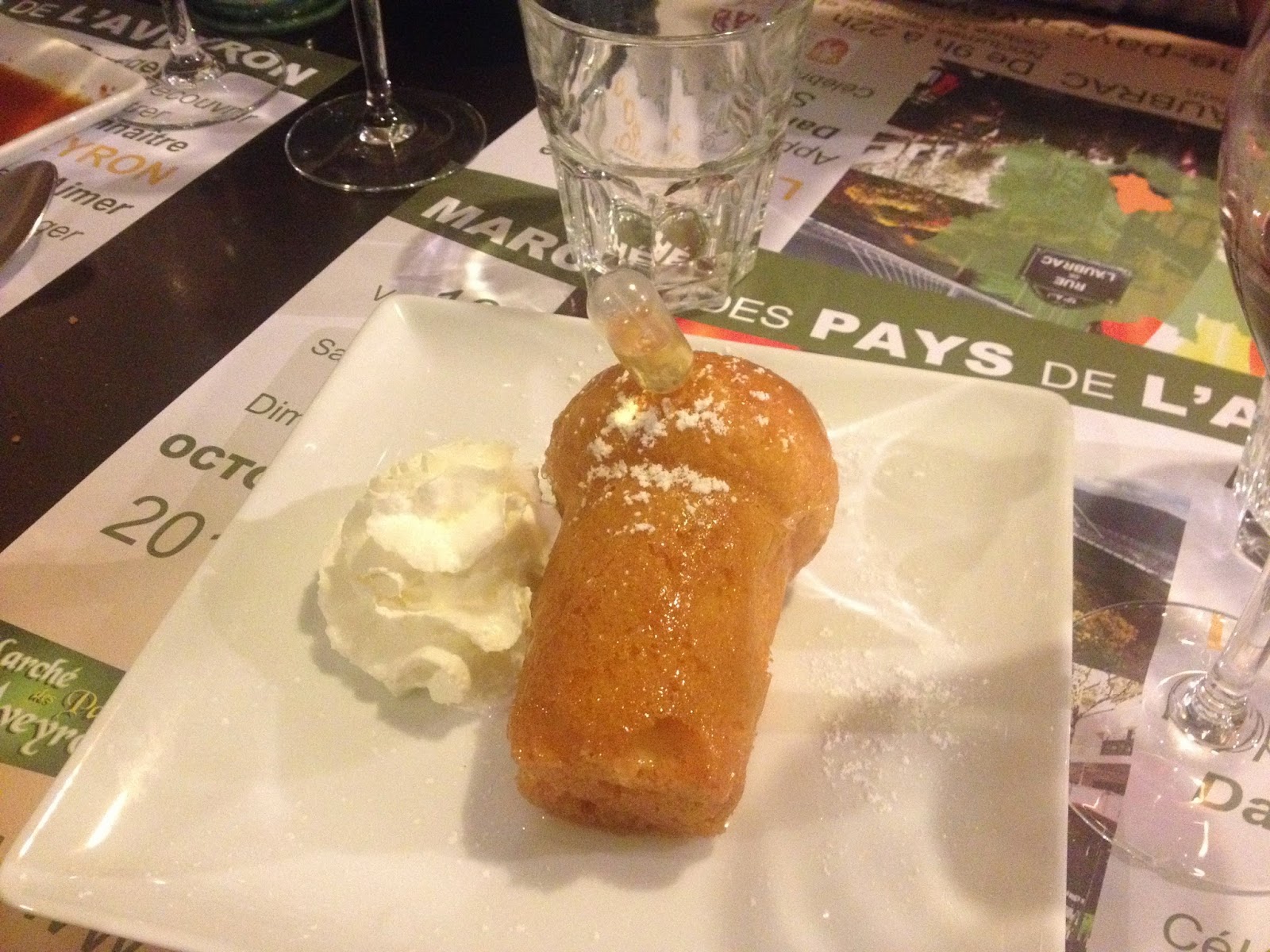 That small plastic syringe sticking out of the top has rum in it.  You inject it into the cake and then douse the outside with the rest.  It was really good.

We left the restaurant around 11 pm, and I had no trouble getting back to my side of Paris quickly.  The only problem was a woman in her 60s who staggered out of my car at a stop and then vomited all over the platform.   Well, better out than in.

This morning when I opened my email I got my other big bit of good news:  my article on Holocaust education in Israel has finally been accepted for publication!  People don't realize how long publishing research in my field takes.  Here's the timeline: