I did my laundry this morning instead of going to the library; I was down to my last clean underwear.  There's a laundromat three blocks from my hotel.  I noticed that almost to a person, everyone in the laundromat was not a "typical" french person.  In addition to myself (tourist), there were several Africans and Arabs and one Asian woman.

While my clothes were washing, I headed up to the weekly market that took over the main street. 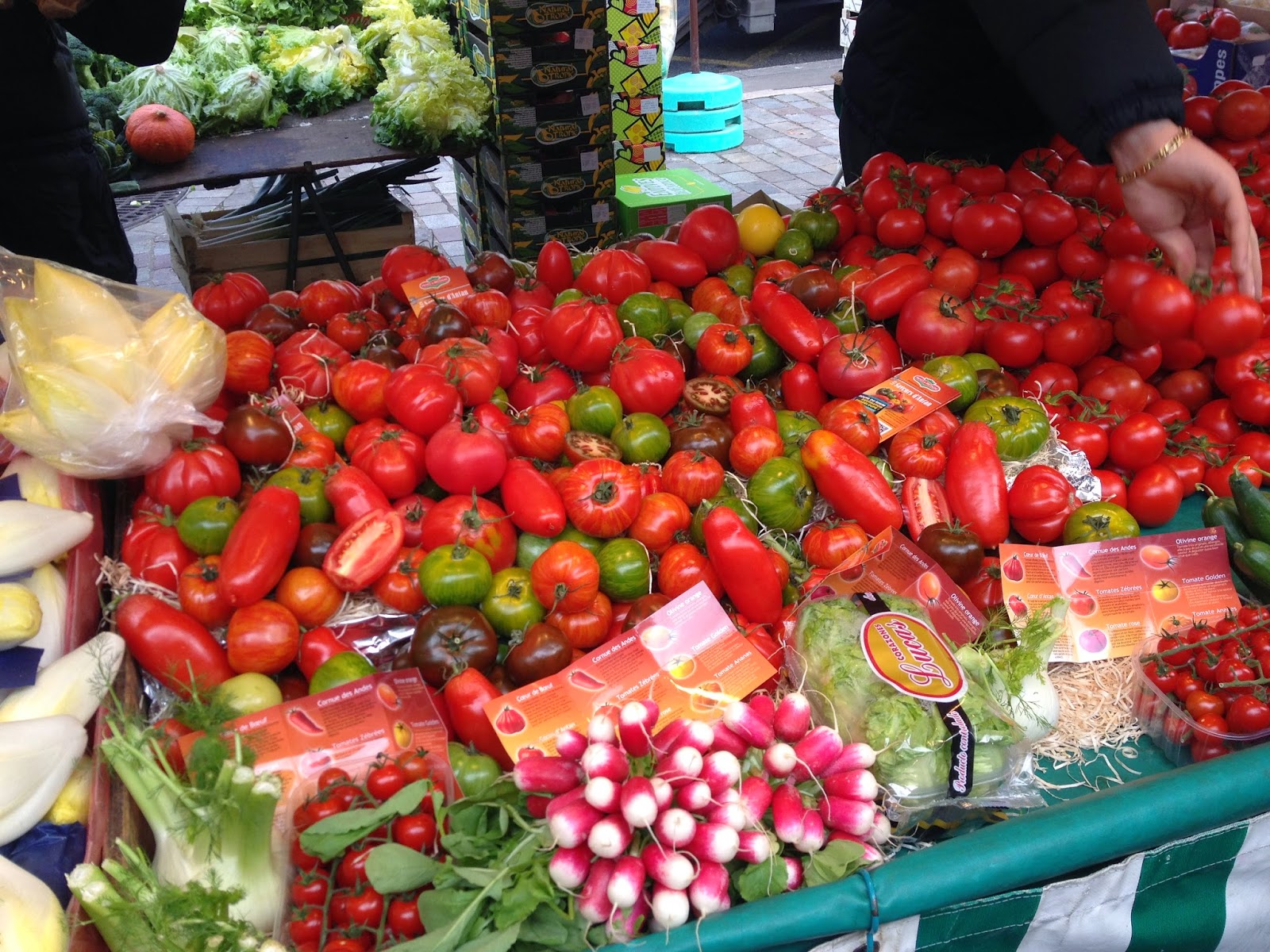 I could spend the entire day photographing fruit, vegetable, cheese, fish, and meat markets; I find them physically and aesthetically fascinating.  I've always loved the way merchants try to arrange them to attract customers.

Many of them had strong and fascinating, if not always pleasant, aromas, like the fish mongers: 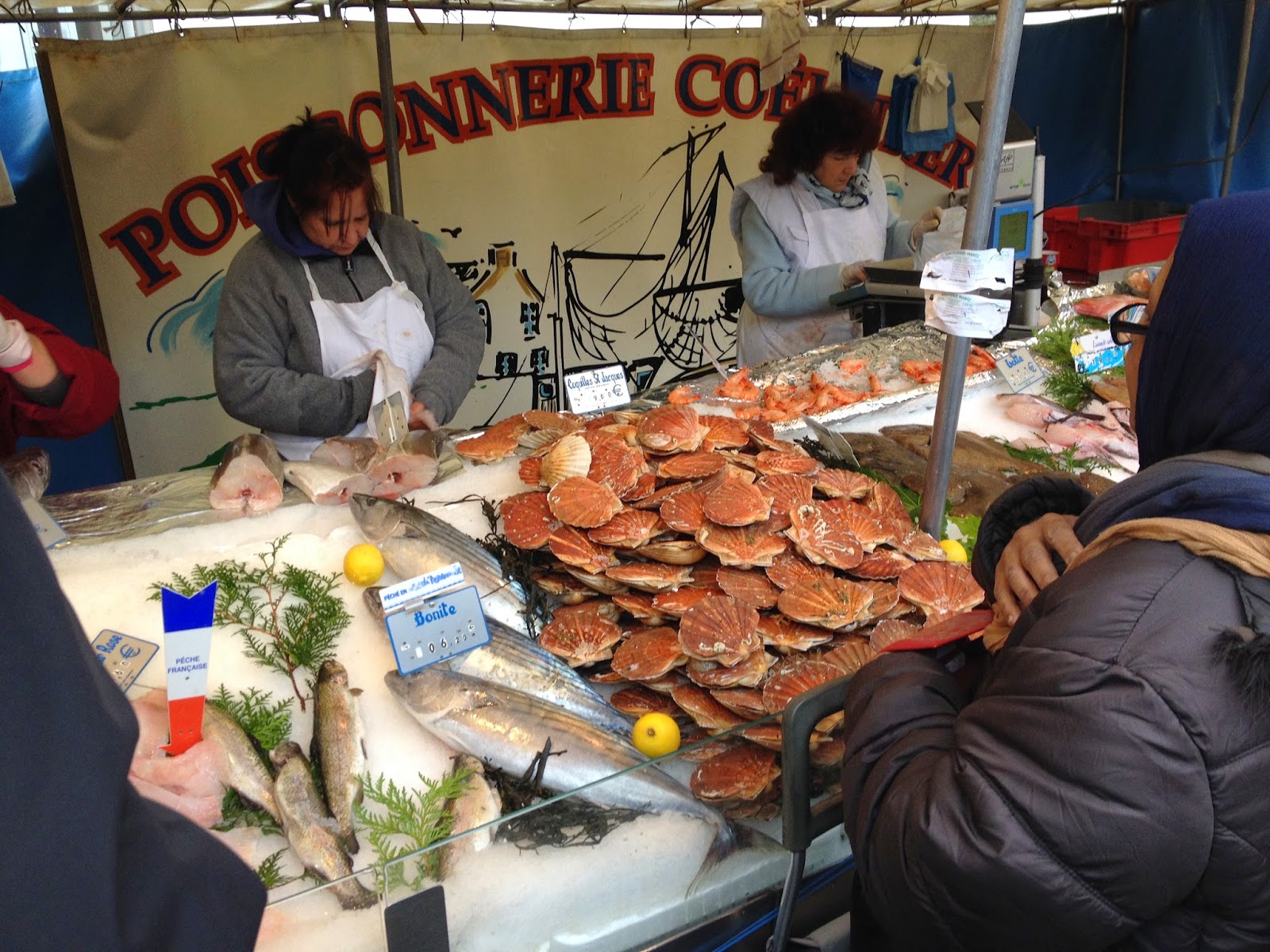 and the cheese mongers: 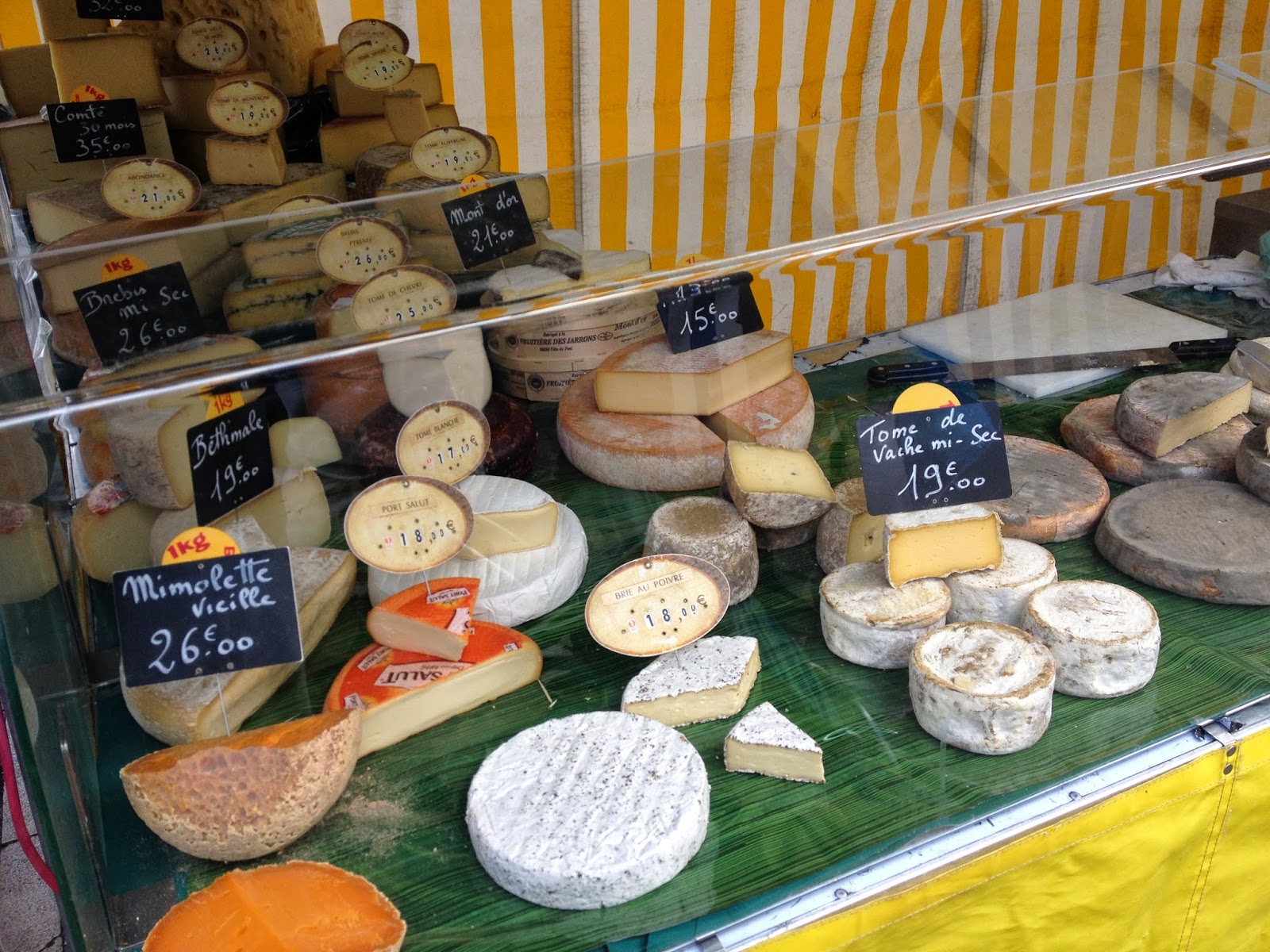 The people are also an interesting mix.  I find it difficult to take photos of people; you are essentially treating them as objects.  I did manage to get one shot of this woman working in a boucherie: 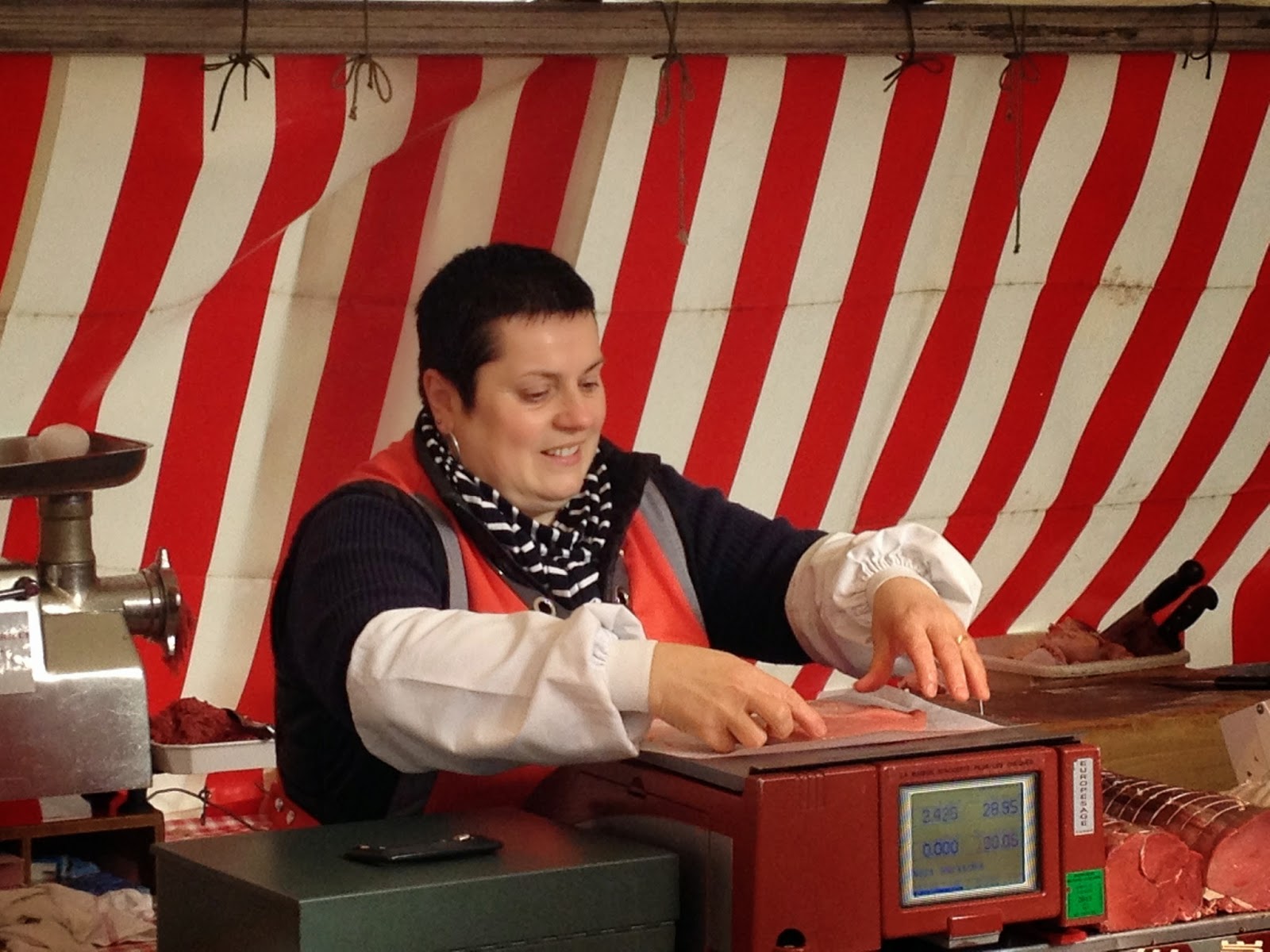 They also had some food that was prêt à manger, like this gorgeous paella, but I really couldn't buy it: 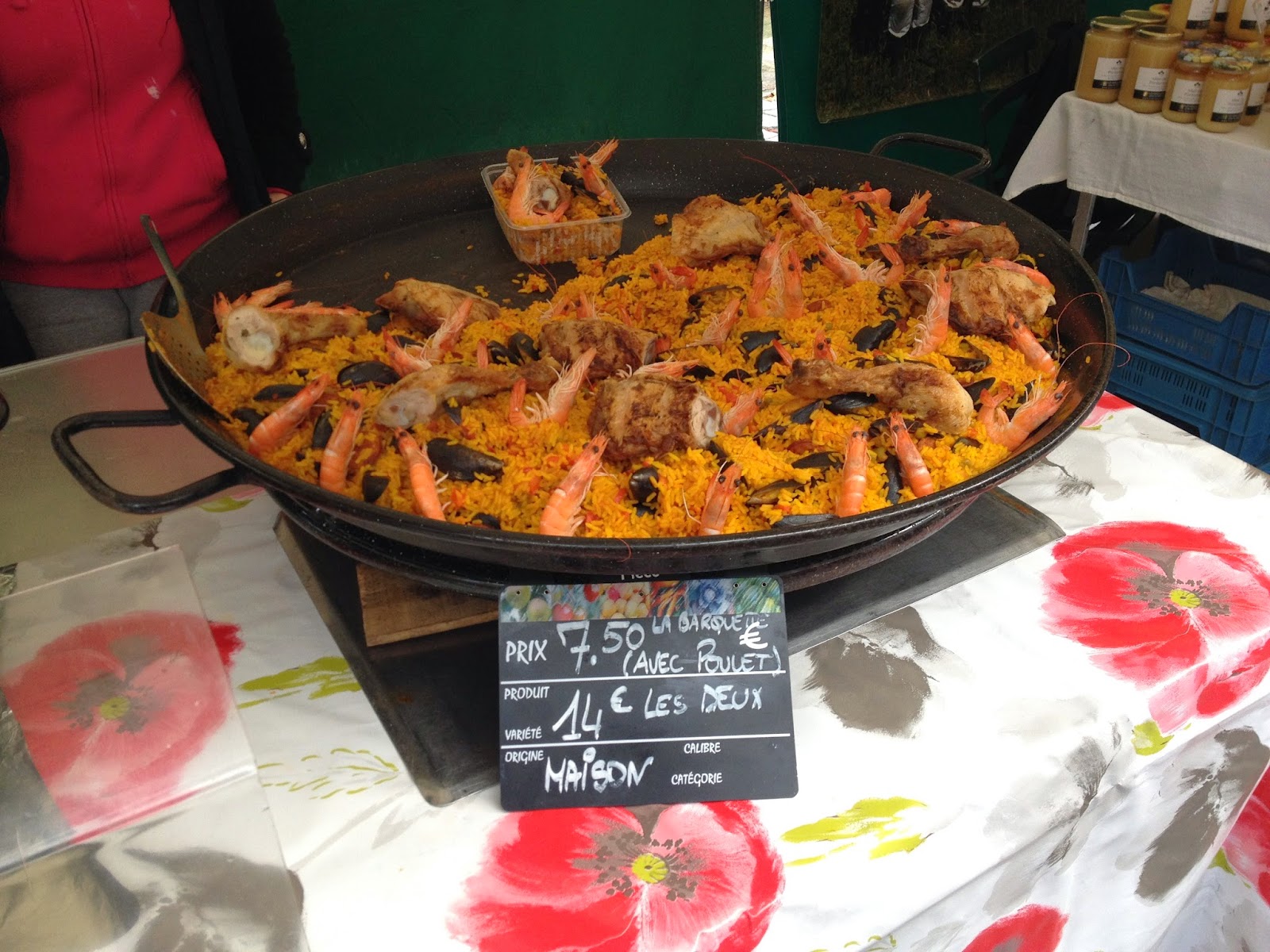 Eventually, though, I had to head back to the lavarie, to move my clothes to the dryer.  Altogether, I was in and out in about an hour and 15 minutes.

I really wanted to check out on of the big covered markets, the Marché d'Aligre nearby in the 11th arrondissement.   Took me a while but I eventually found it. 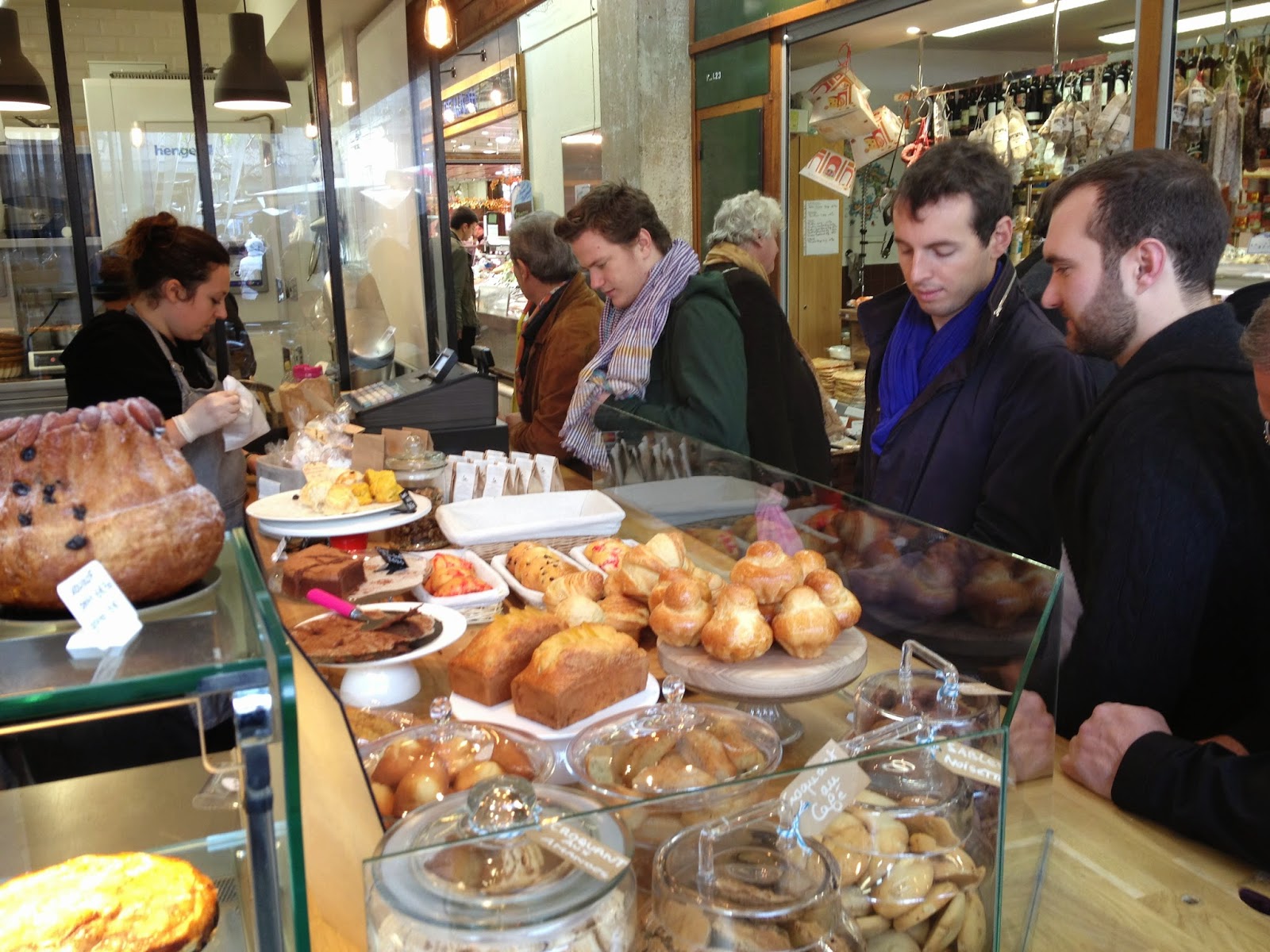 It reminded me a lot of the mercado near our apartment in Barcelona. 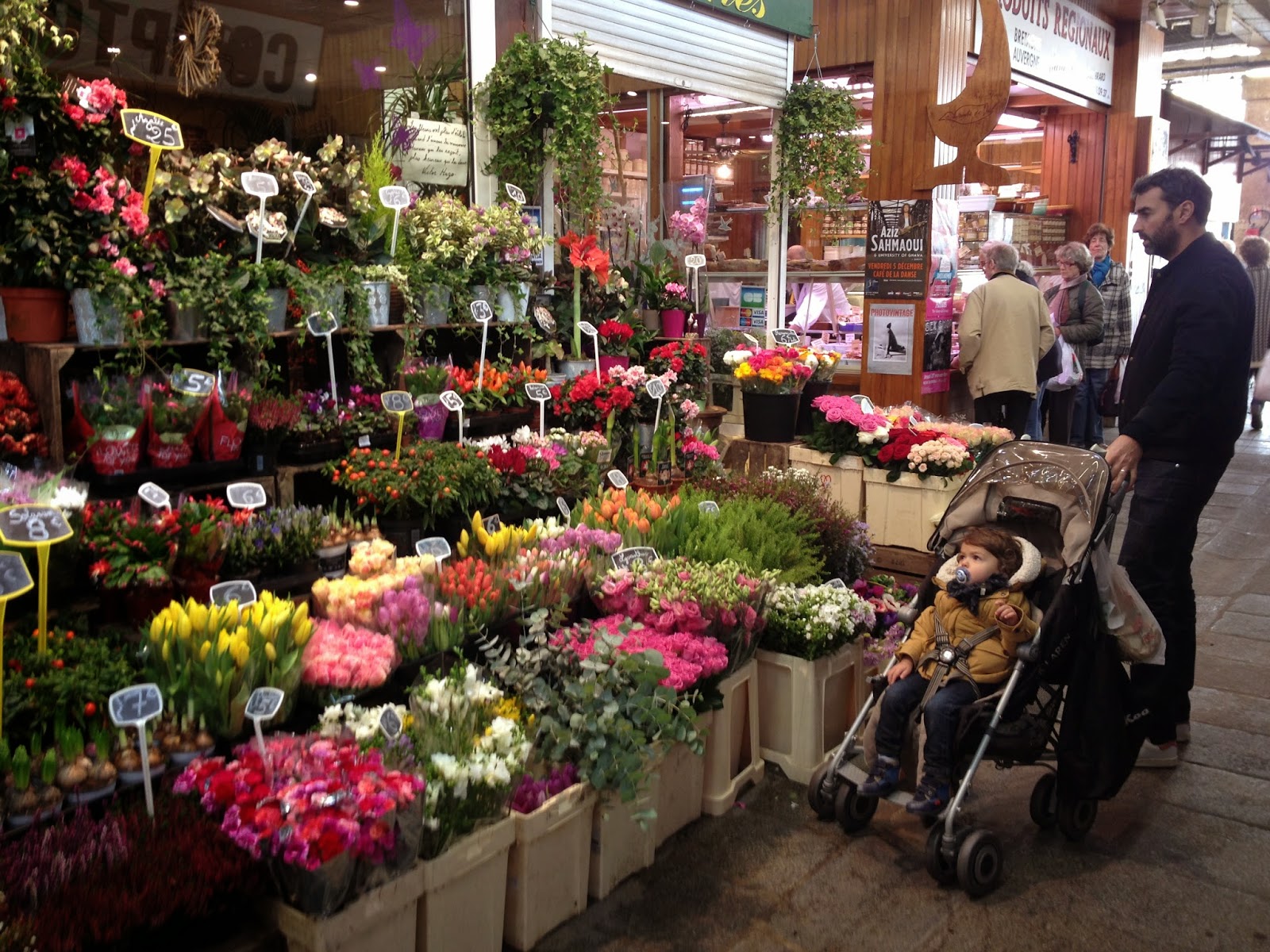 I mean, why would anyone ever shop in a supermarket, if they could go to a place like this?

I could post photo after photo, but I won't.  Well, just one last one of some amazing looking mushrooms: 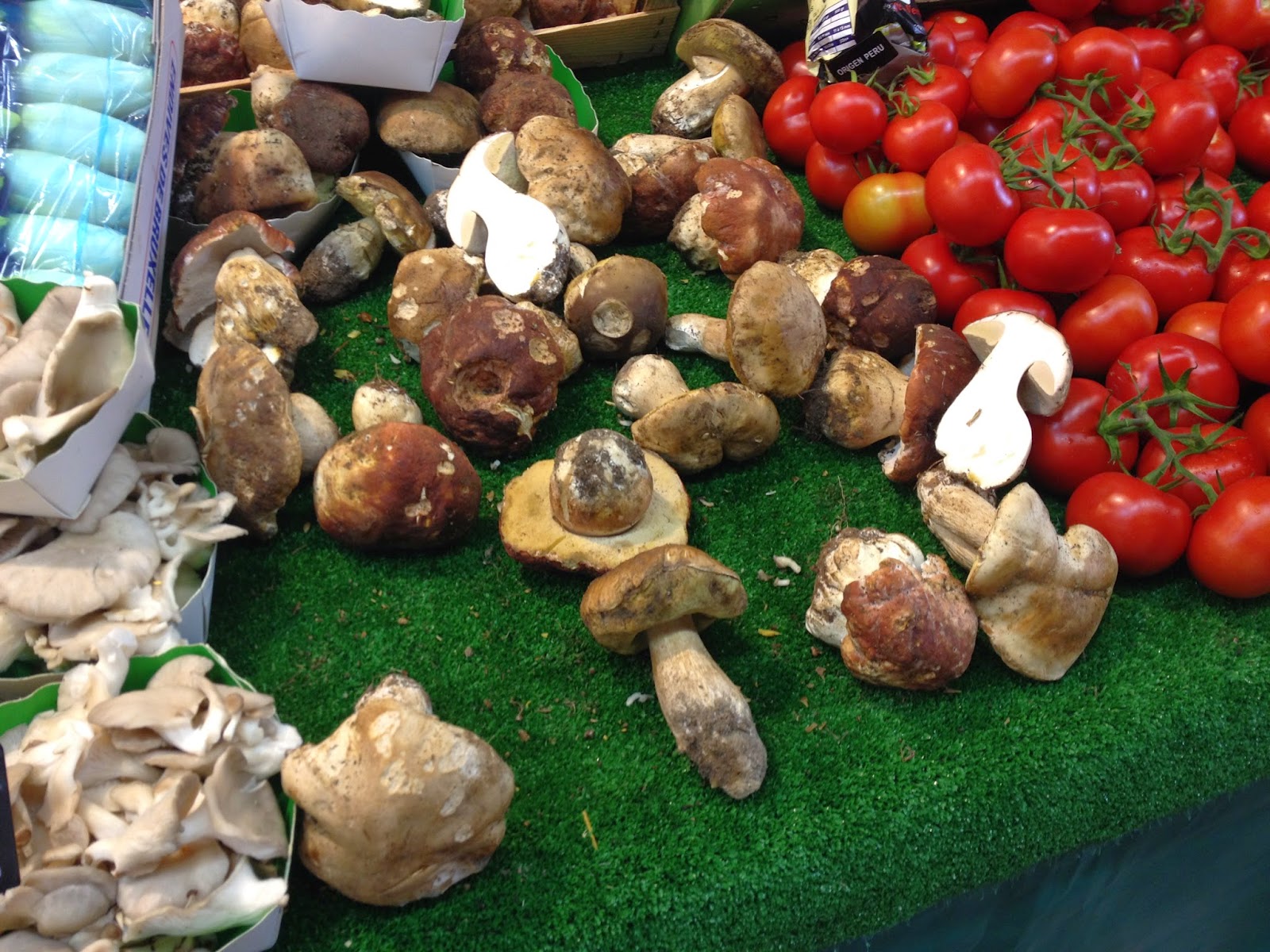 I wish I could have bought some of this amazing food for lunch, but, it's not like I had kitchen to go back to where I could cut up everything and prepare a meal.  I ended up in a small cafe on Avenue Daumesnil having a club sandwich. 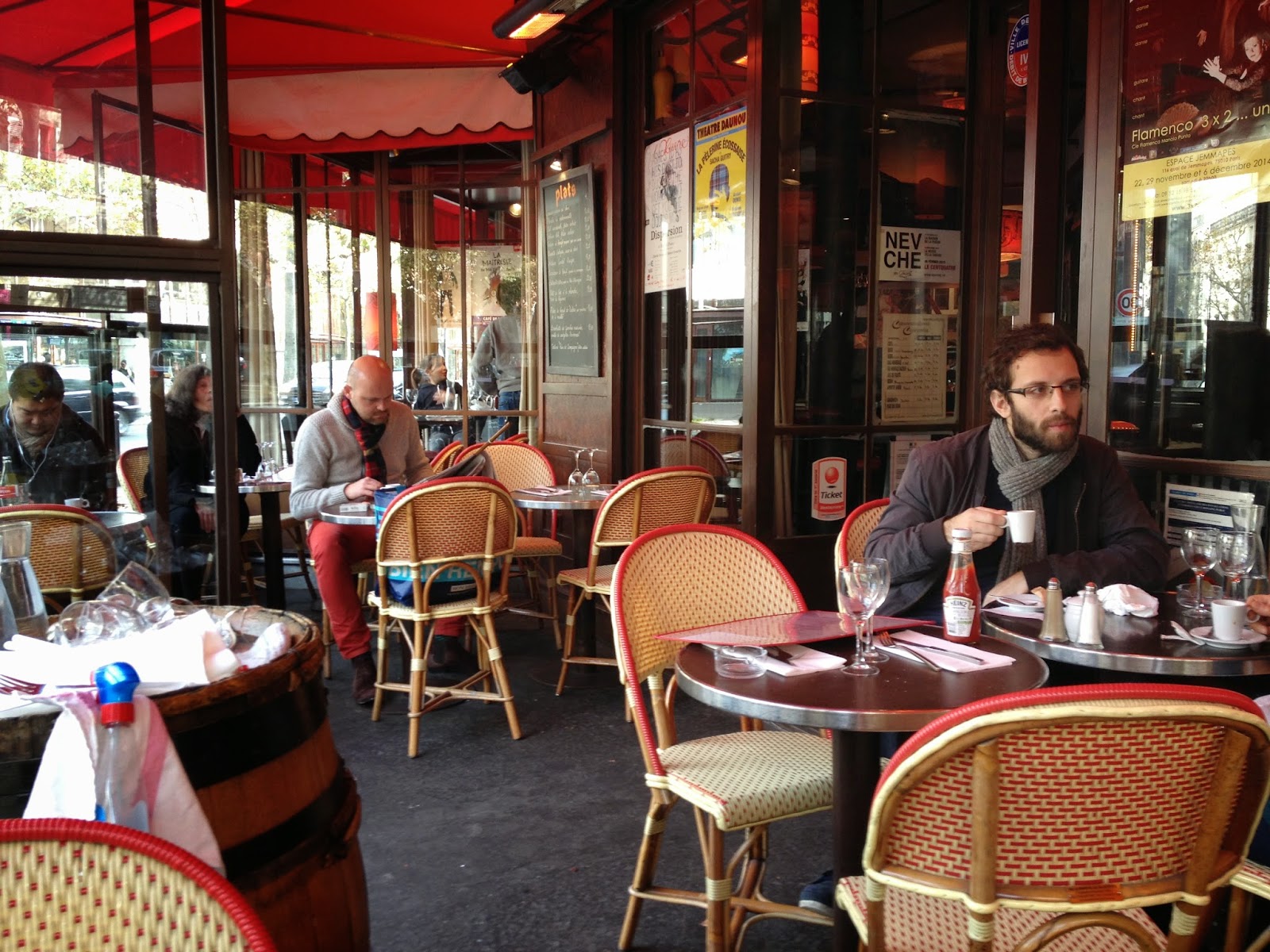 (Who wants to see a picture of a chicken sandwich; here's the cafe).

Afterwards, I decided to take a walk on the Promenade plantée, an elevated walkway that stretches for almost three miles. 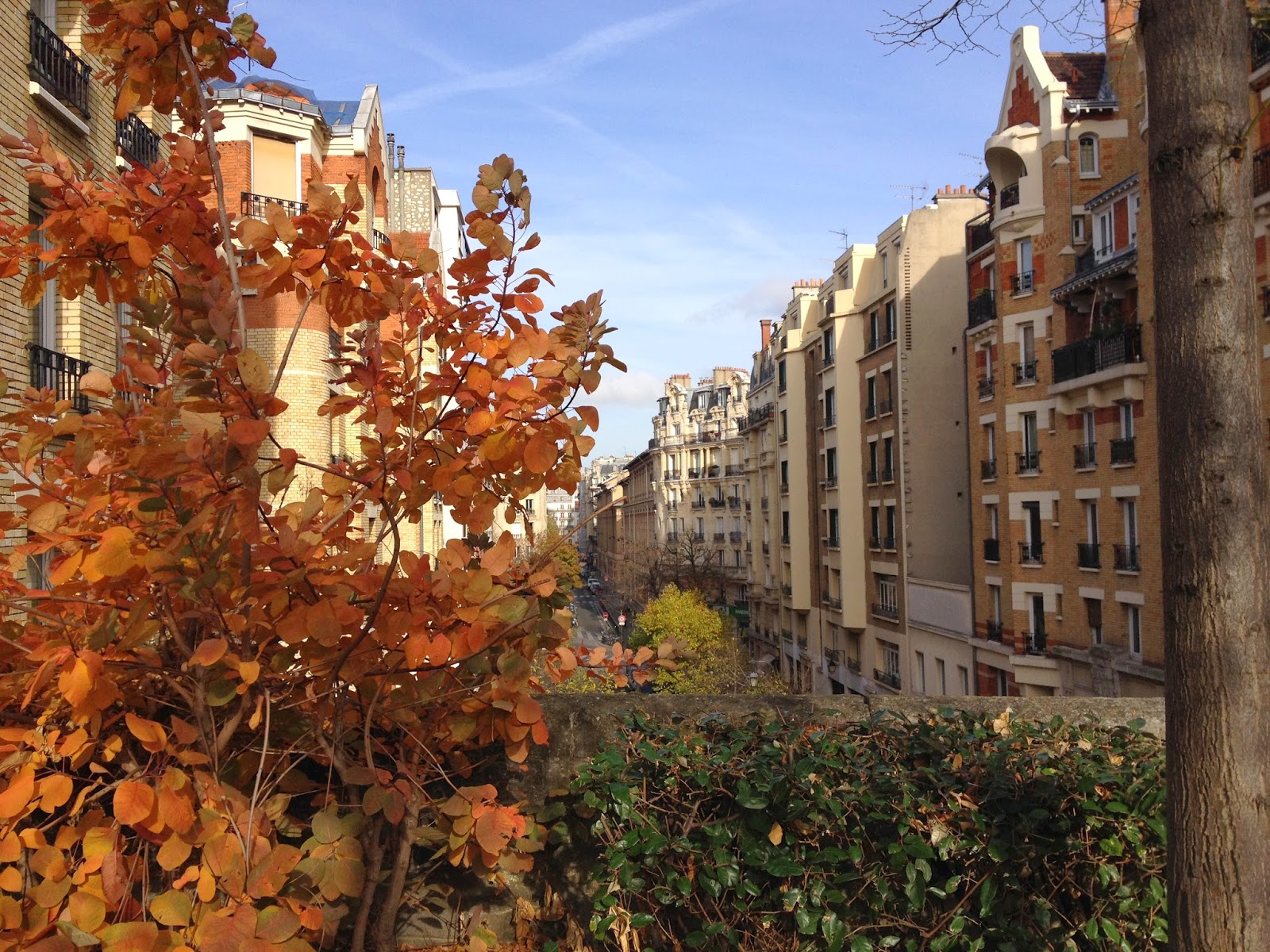 My uncle had recommended the walk, and also recommended I try an ice cream shop near the end of it.  Unfortunately, while I thought I had saved the address on my phone, it turned out I could only open the page if I had WiFi, which I didn't.  It took me a while but I eventually found Chez Raimo and asked for three boules:  praline, salted caramel, and vanilla.  The vanilla was actually my favorite, and I could see from the small, black vanilla seeds that they used real vanilla, not extract or even, God forbid, imitation: 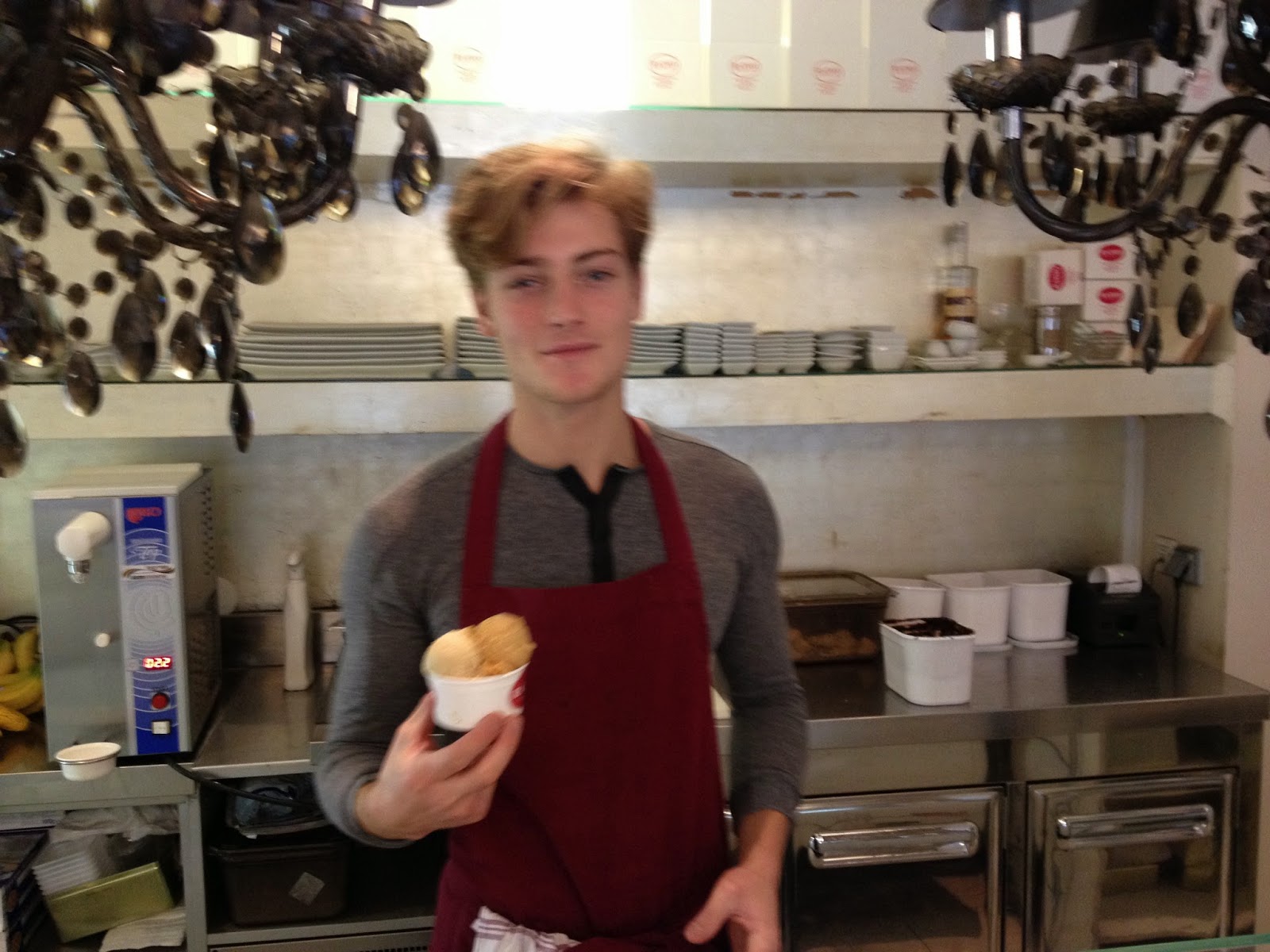 By the time I finished my ice cream, I realized it was after 2:30 pm.  If I raced to the library, I could get there by 3, but I'd hoped to go to a concert this evening at St. Chapelle, which meant I would only have a few hours to work, at best.  I decided to be lazy and skipped the BnF altogether.

Instead, I went to the Cité and bought a ticket for the concert, which was a small chamber group performing baroque works.  Unfortunately, they only took cash.  This has been an issue; I've been paying with cash more often than I expected, so I'll have to go to the bank again tomorrow and withdraw some more.

From there, I walked over to the Maison Européenne de la Photographie to check out there exhibit.  November is the "mois de la photo" (they do this every two years) so I was curious what they would have.  One exhibit, called "Suspense" by Tim Parchikov, was really interesting.  He solved the problem of how to take candid shots by doing it at night, when he (and his subjects) were partially obscured in darkness.  I didn't find the other big exhibit, "Faux Horizons," by Alberto García-Alix, nearly as interesting.  Here, most of the creativity was through manipulation of the image, such as this one, which I secretly snapped when no one was looking. 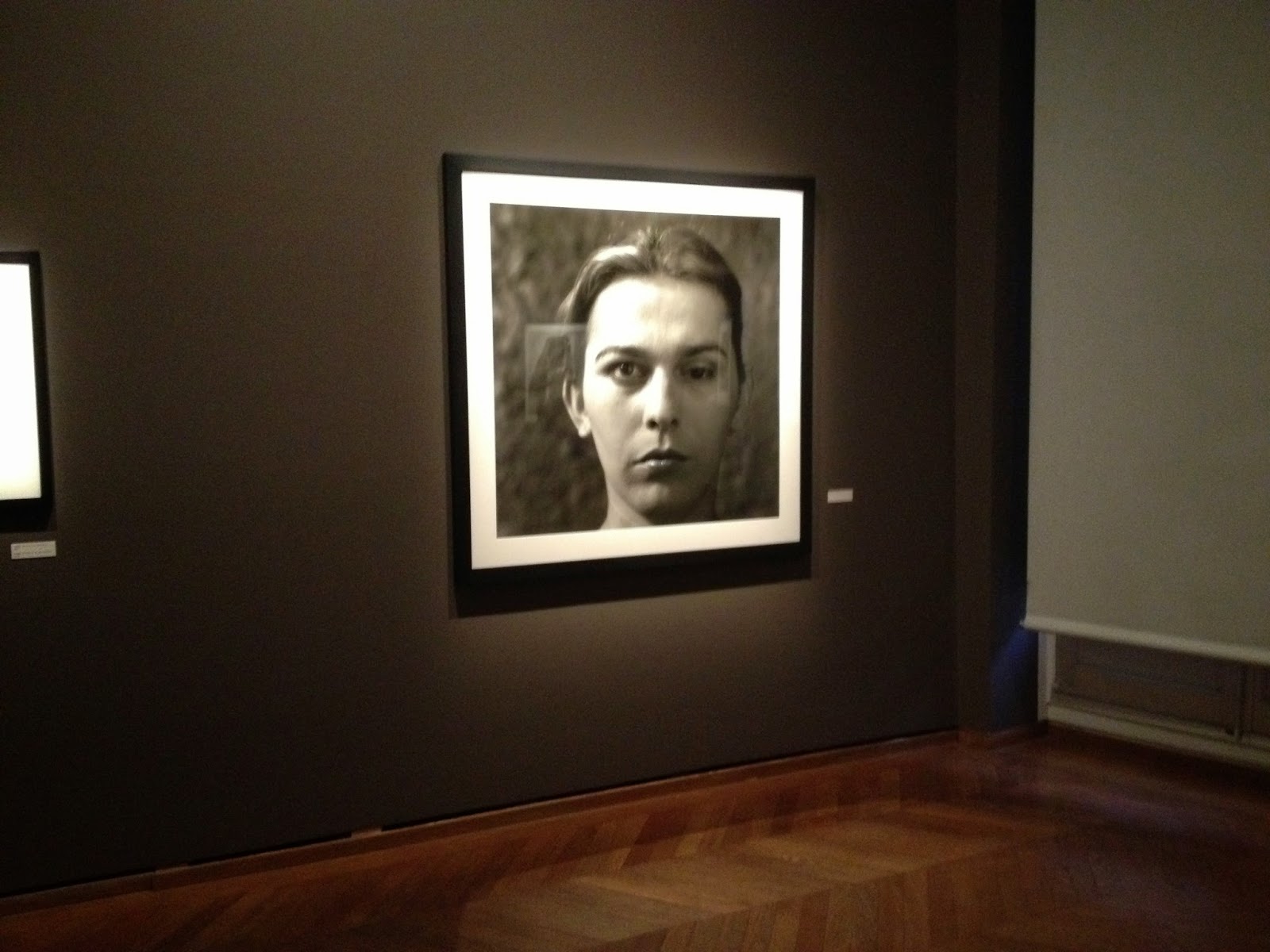 I had trouble figuring out at first, what was wrong with picture.  When I examined each half of the face, it looked fine.  Then I realized that what he had done was combined two photos of the same subject, but in which she is looking in slightly different directions.

It seems strange, if not hypocritical, not to permit photography in photography exhibitions.  There were far too many people at the Winogrand exhibition for me to sneak a shot, but they have a big display for it in one of the Metro stations.  Here, I think you can see how he almost disappears as the photographer into the picture.  He didn't stage his shots; he just photographed people on the street.  How he managed not to influence them by his presence, I wish I could learn. 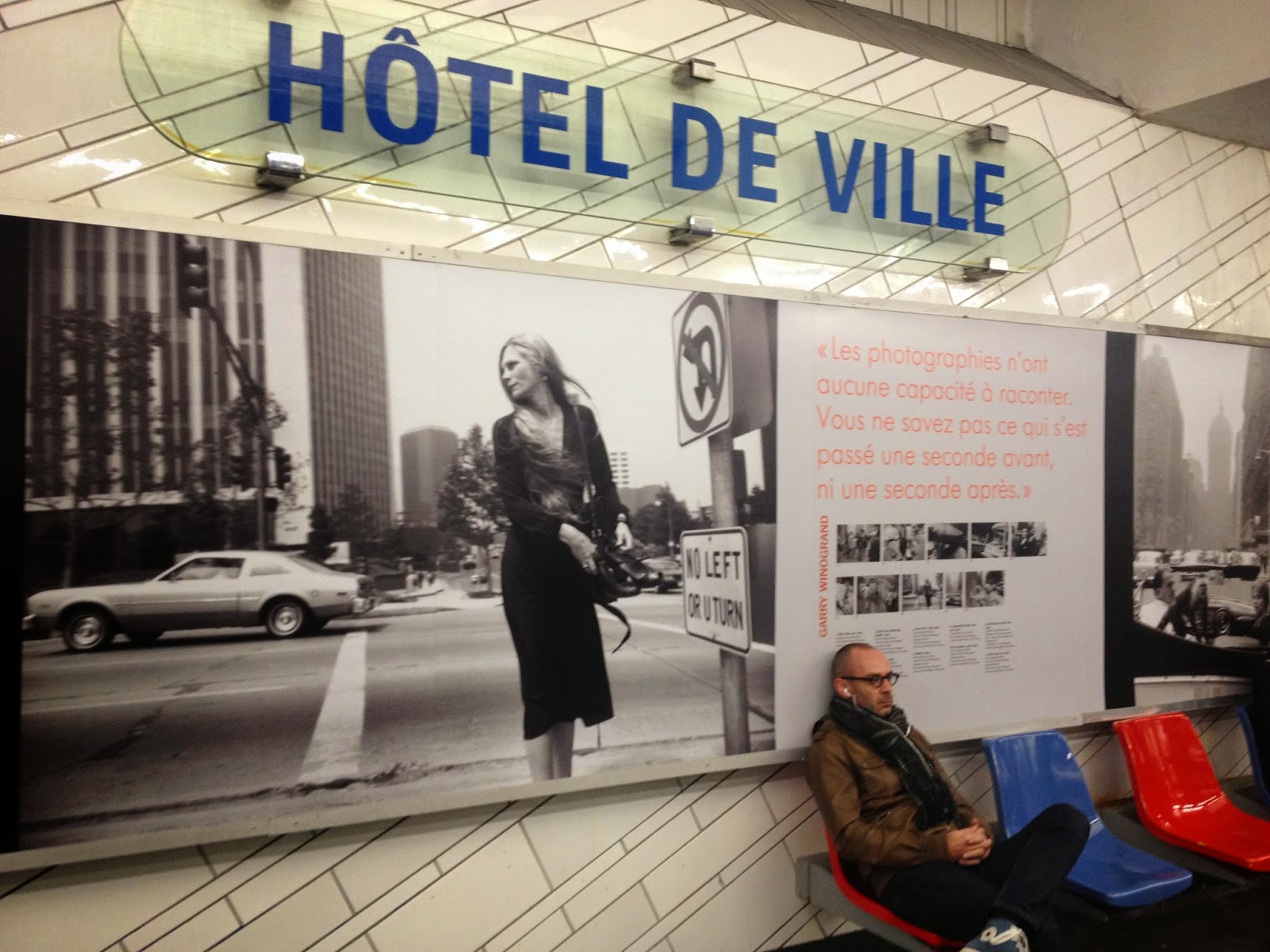 Afterwards, I had a coffee and did the crossword puzzle.  Eventually, I made my way back to St. Chapelle and eventually they seated us the small gothic chapel.  The last time I was at a concert here was in 1992.  The sun set much later in the day then, so I could see the huge stained glass windows all lit up.  Now, it gets dark by 5:30.  Still, the music was gorgeous. 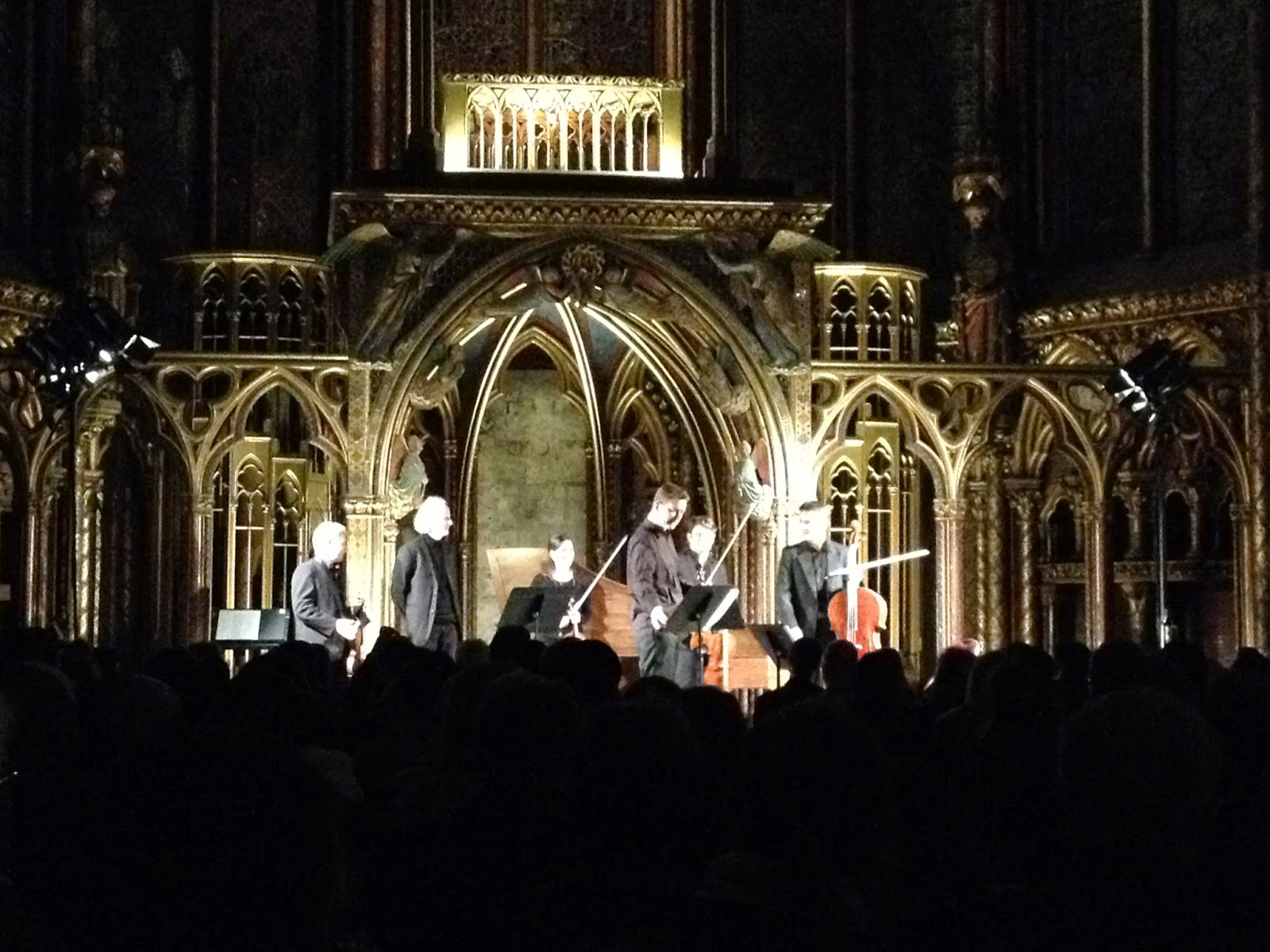 For dinner, I went back to Dame Tartine (they take credit cards and have WiFi) but only had the onion soup (in Paris, it's always French onion soup) and the veau marengo, both of which seemed appropriate for a cold night. 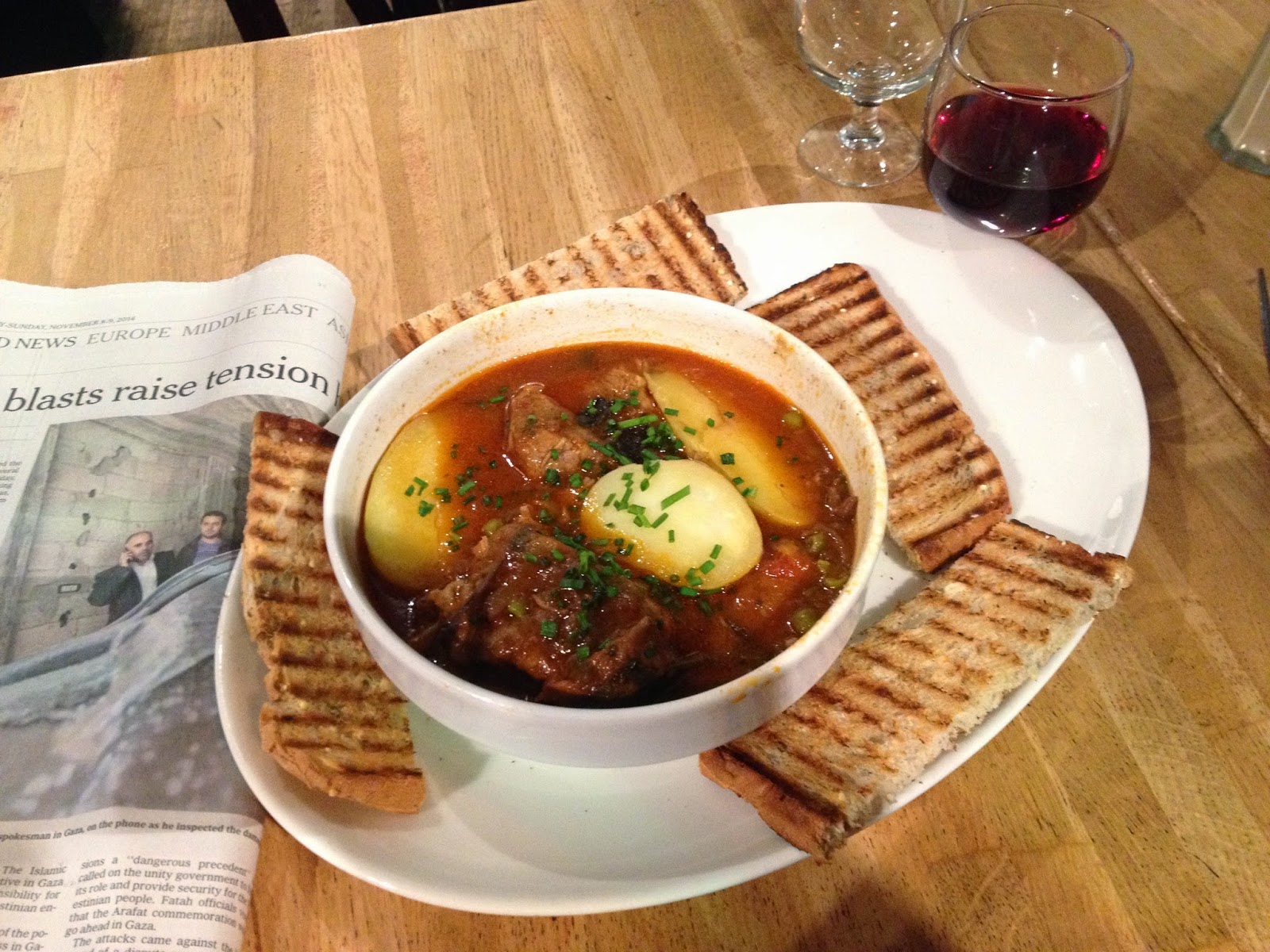 Finally, I headed back to the hotel where, as happens every day, I find the maid has closed the windows I left open so now the room is hot and stuffy.  I open them up wide to let in the cold night air and make the room more bearable: 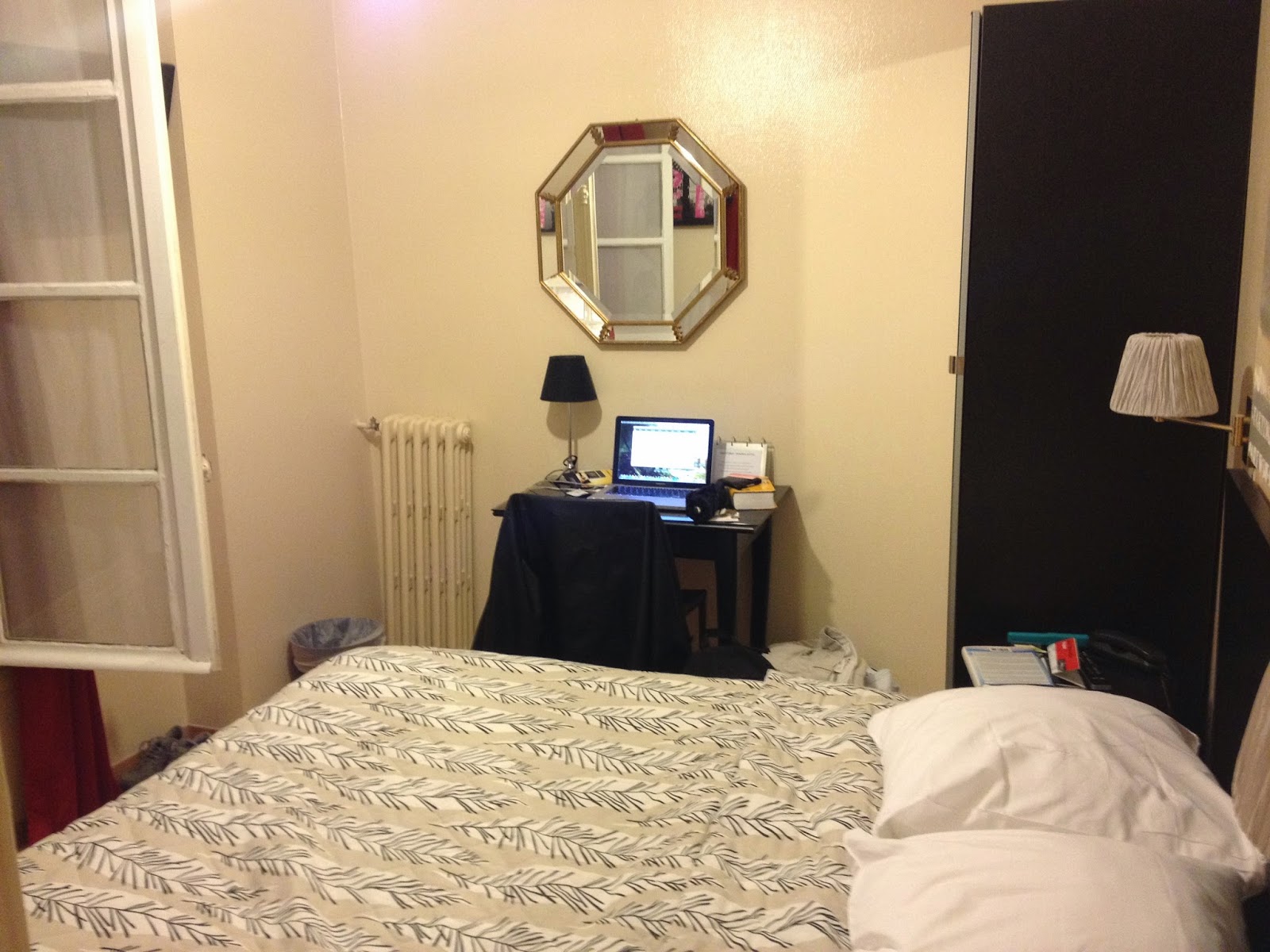