As I think I've mentioned before, I've not been thrilled with my choice of lodging in New York. When I  booked this place, I thought it was a B & B; instead it turned out to be less a hostel and more like a dorm room.  They do, however, have a nice breakfast. 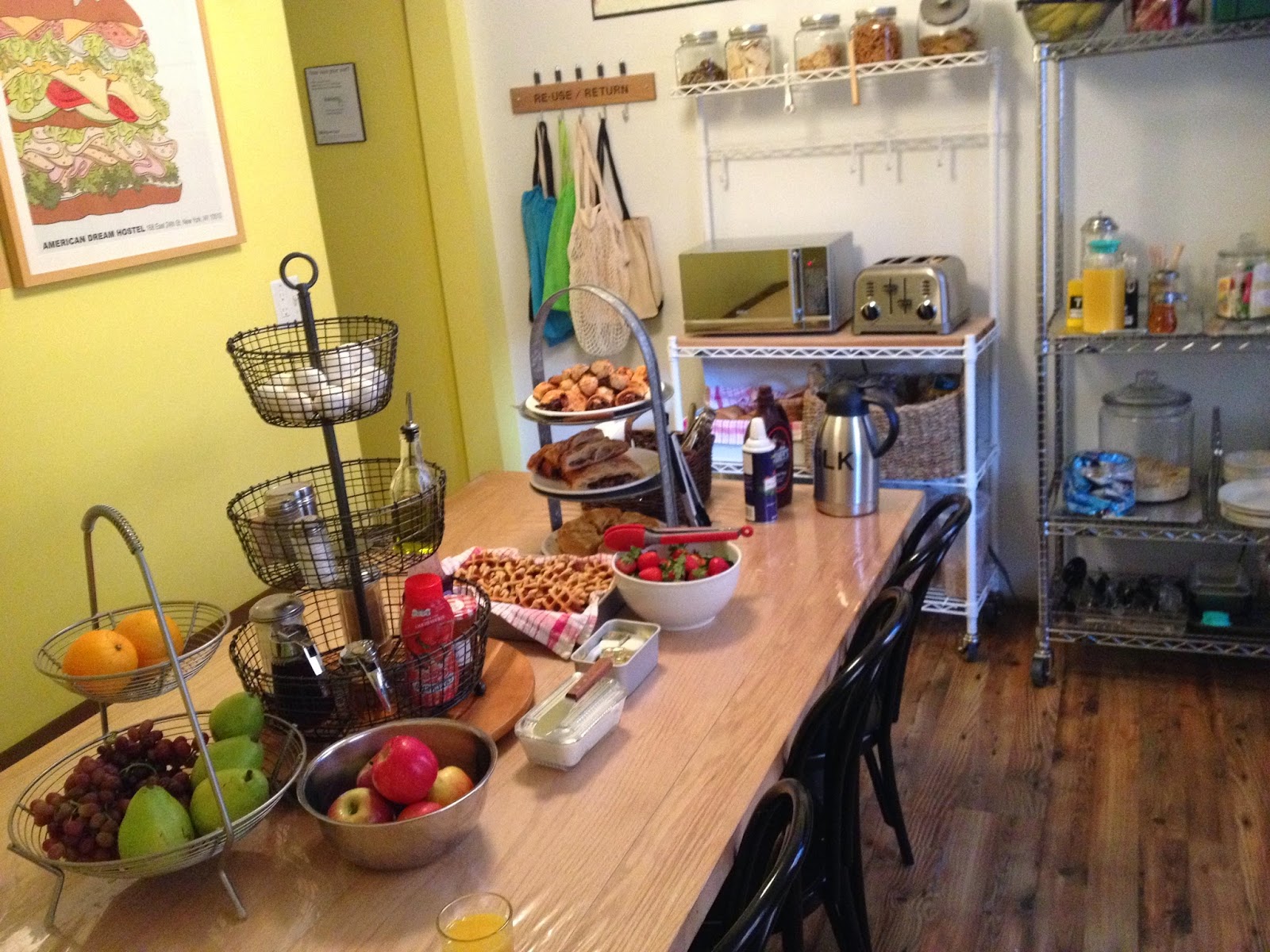 It was 28 when I woke up this morning, and I knew the temperature might get as high as 33 during the day, so I bought some winter clothing to stay warm.  When I headed off to the Museum of Modern Art, I not only had on two layers of shirts and a leather jacket, but a scarf, gloves, and cap to keep my kepi warm. 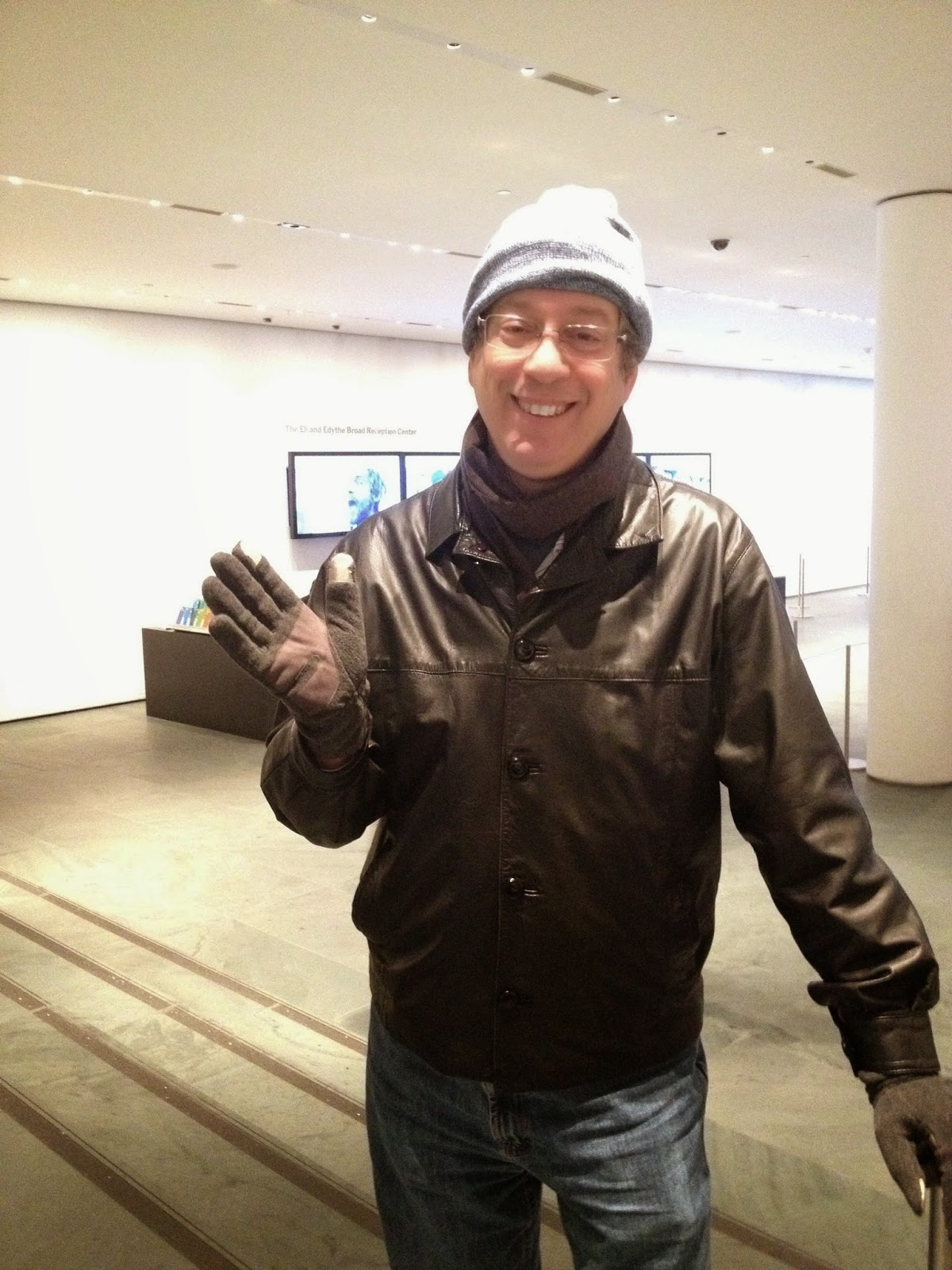 My uncle is a member so he got me in for free and early.  We headed up to see the Matisse cut outs.  I'd seen some of these before at the East Wing of the National Gallery and I enjoy his use of color and shapes.  One of the things I noticed this time was that most of his major works in this medium were in the years immediately after WWII.  In fact, he had been moving in this direction in the 1930s and started to do more during the war.  So many of the artists I love were strongly affected by the rise of the Nazis and the war, that it was almost shocking to me, how little the war affected his work or vision.

When we left the Matisse exhibit, we got coffees and sat and chatted for a while.  Then we resumed our visit to the museum with the Toulouse-Lautrec exhibition.  It opens with his famous and powerful portrait of Aristide Bruant. 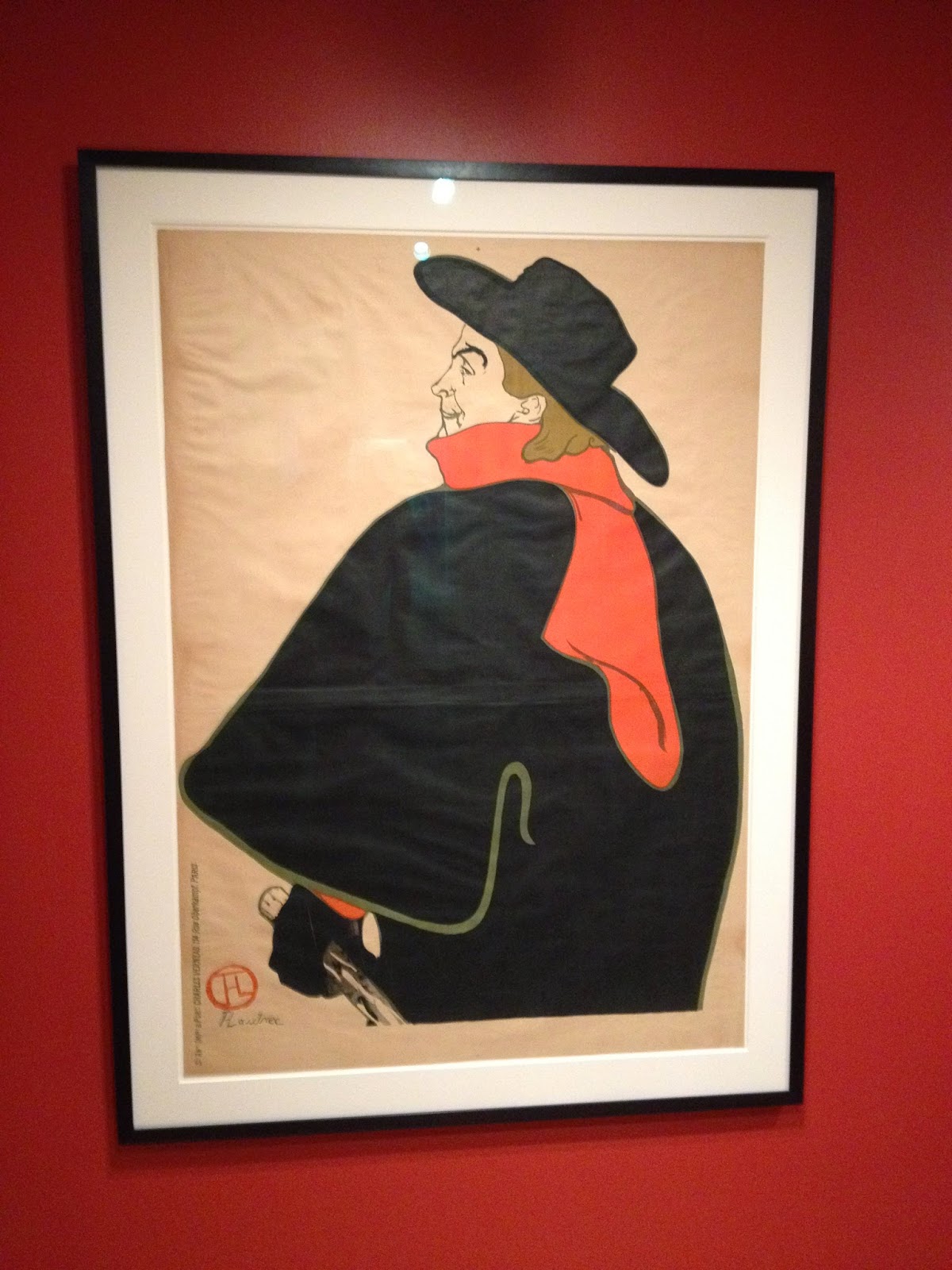 I think I saw a version of this at the San Diego Museum of Art around 1980 and was so moved that I bought the exhibition poster and hung it in my various dorm rooms in college.

Toulouse-Lautrec liked to draw the dancer Jean Avril, but I particularly liked this version where she wasn't on stage or dancing.  It depicts her as someone taking charge of her own image, as she inspects the proofs at the printer. 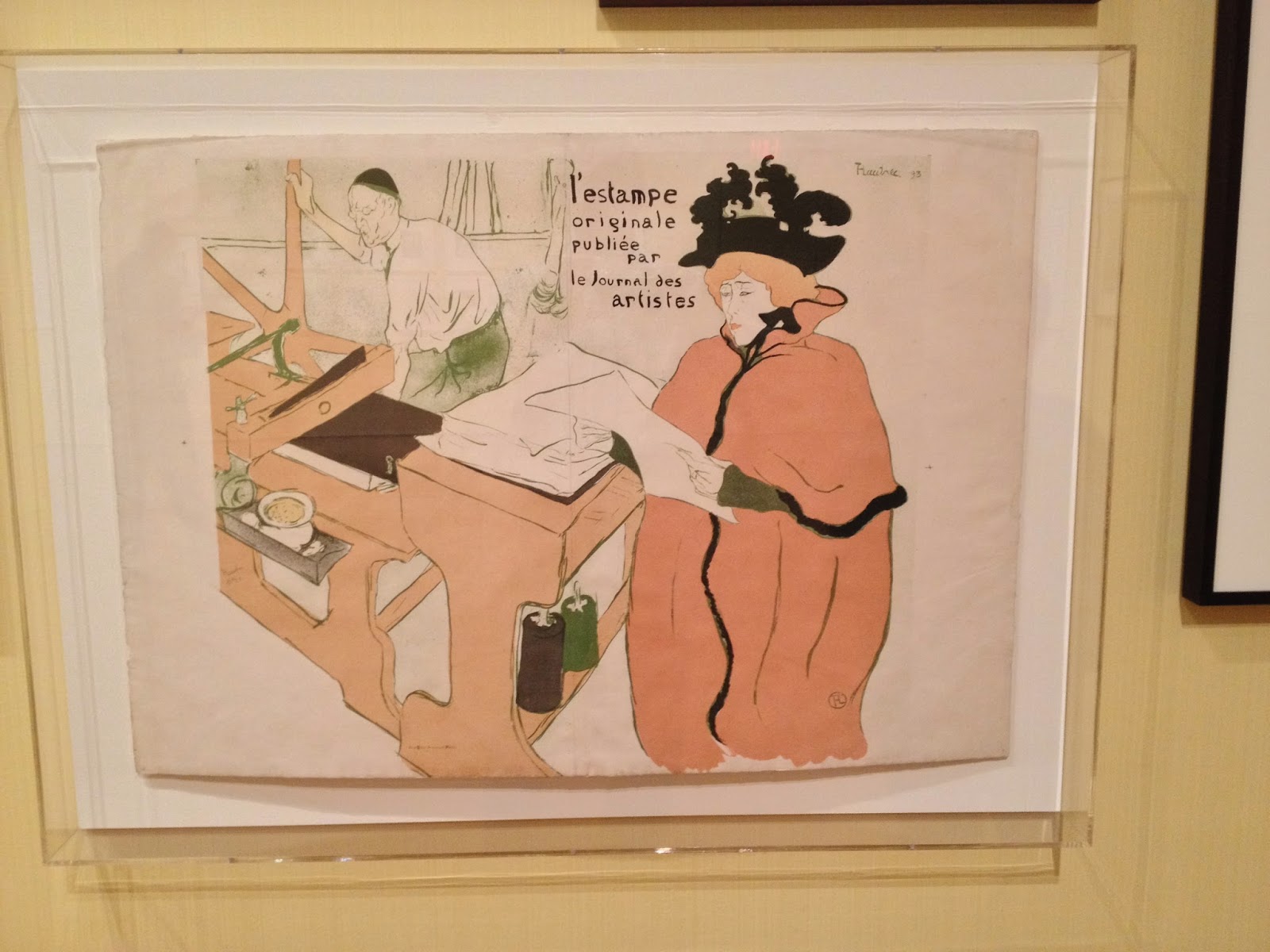 We didn't have much time to tour their permanent collection of post-impressionists; I had to leave early to make my tour of the Lower East Side.  So I sort of raced through looking for things I particularly like.  I had told my uncle that I liked the art and food in Vienna, but not so much the people, so he took me to see "my" Klimts.  But I think Klimt is fun but not particularly special.  I much prefer this Kirchner: 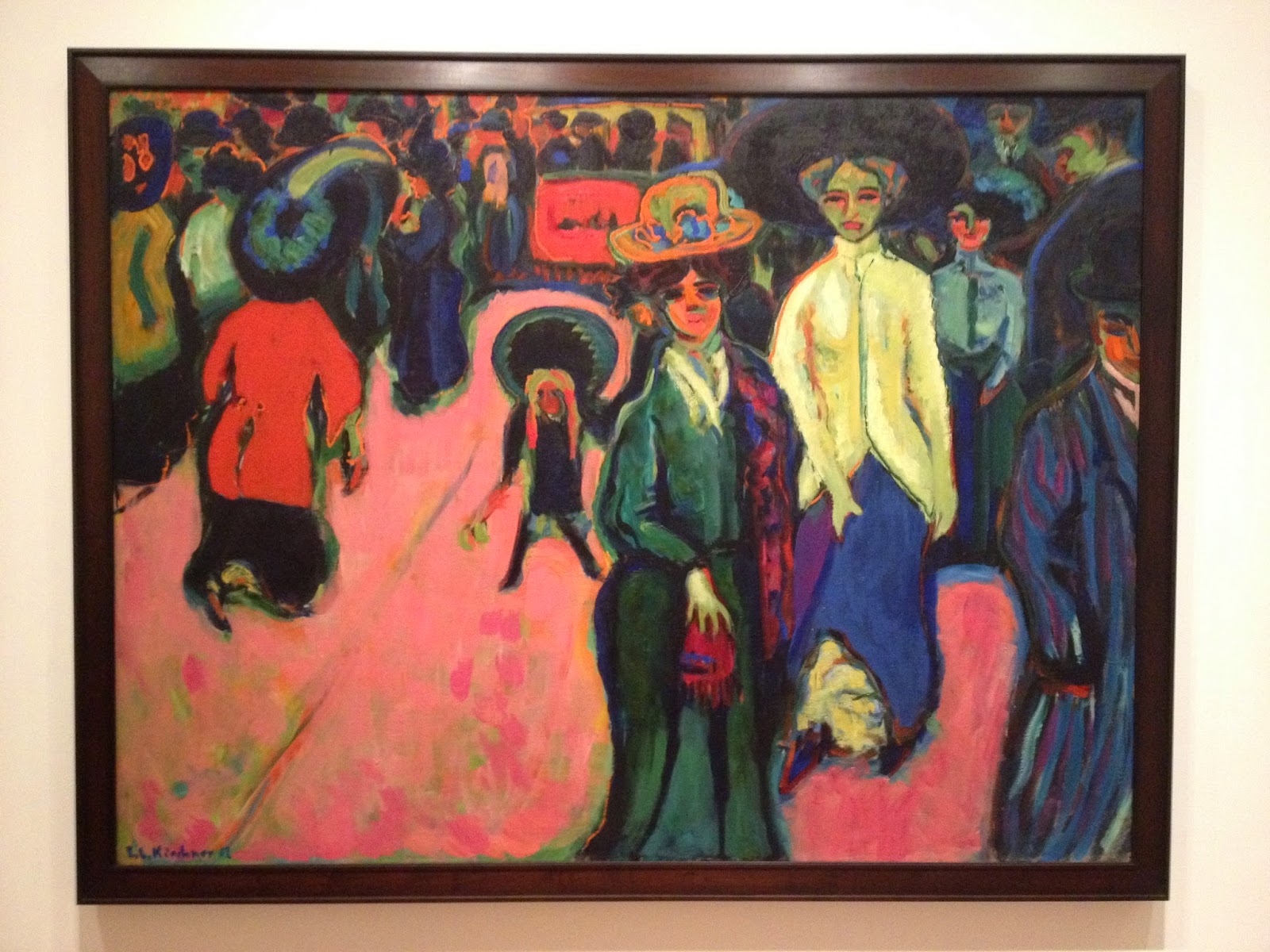 Or the four Kandinskis next to it: 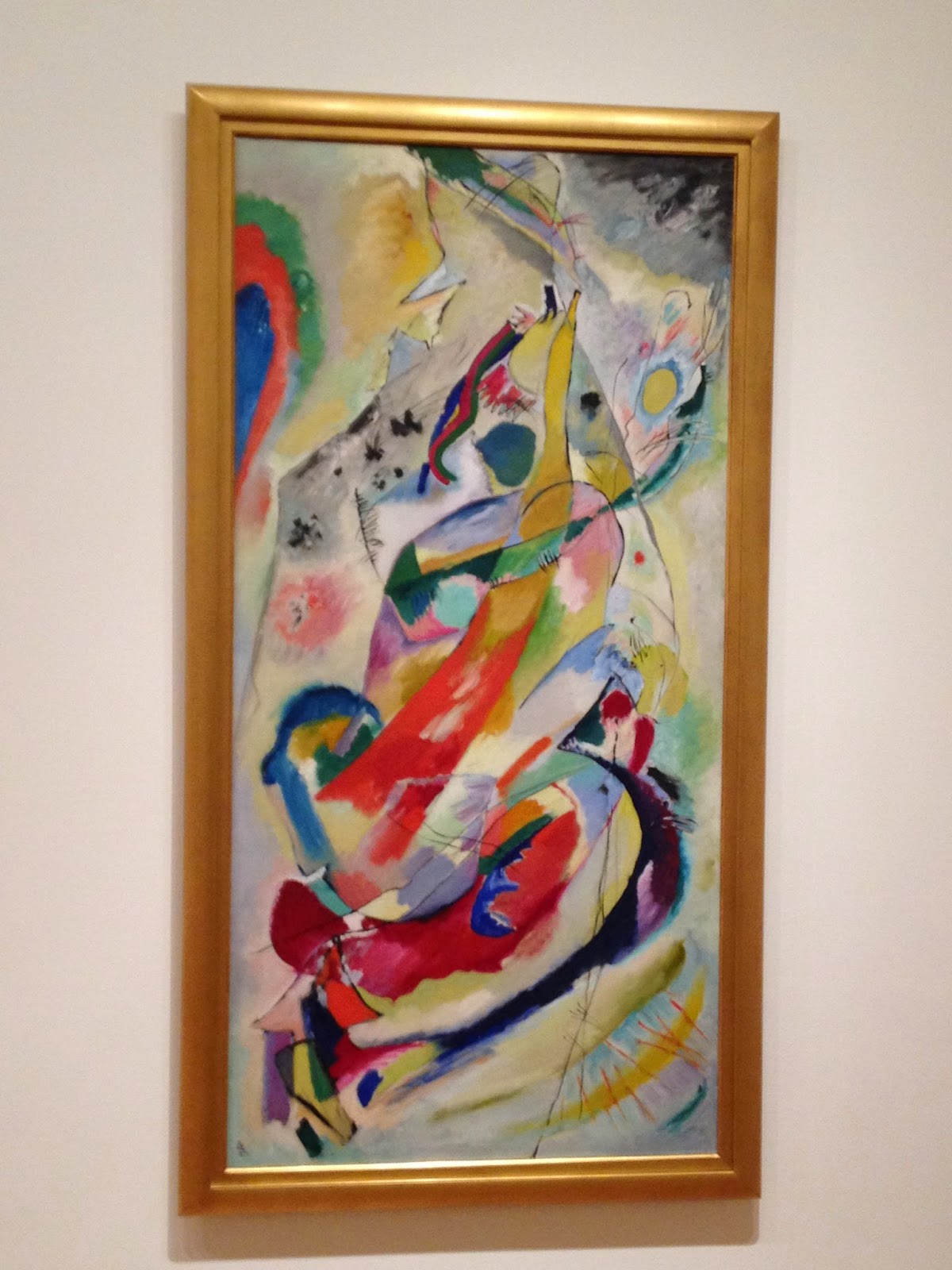 I also very much liked this piece of Italian futurism by Umberto Boccioni: 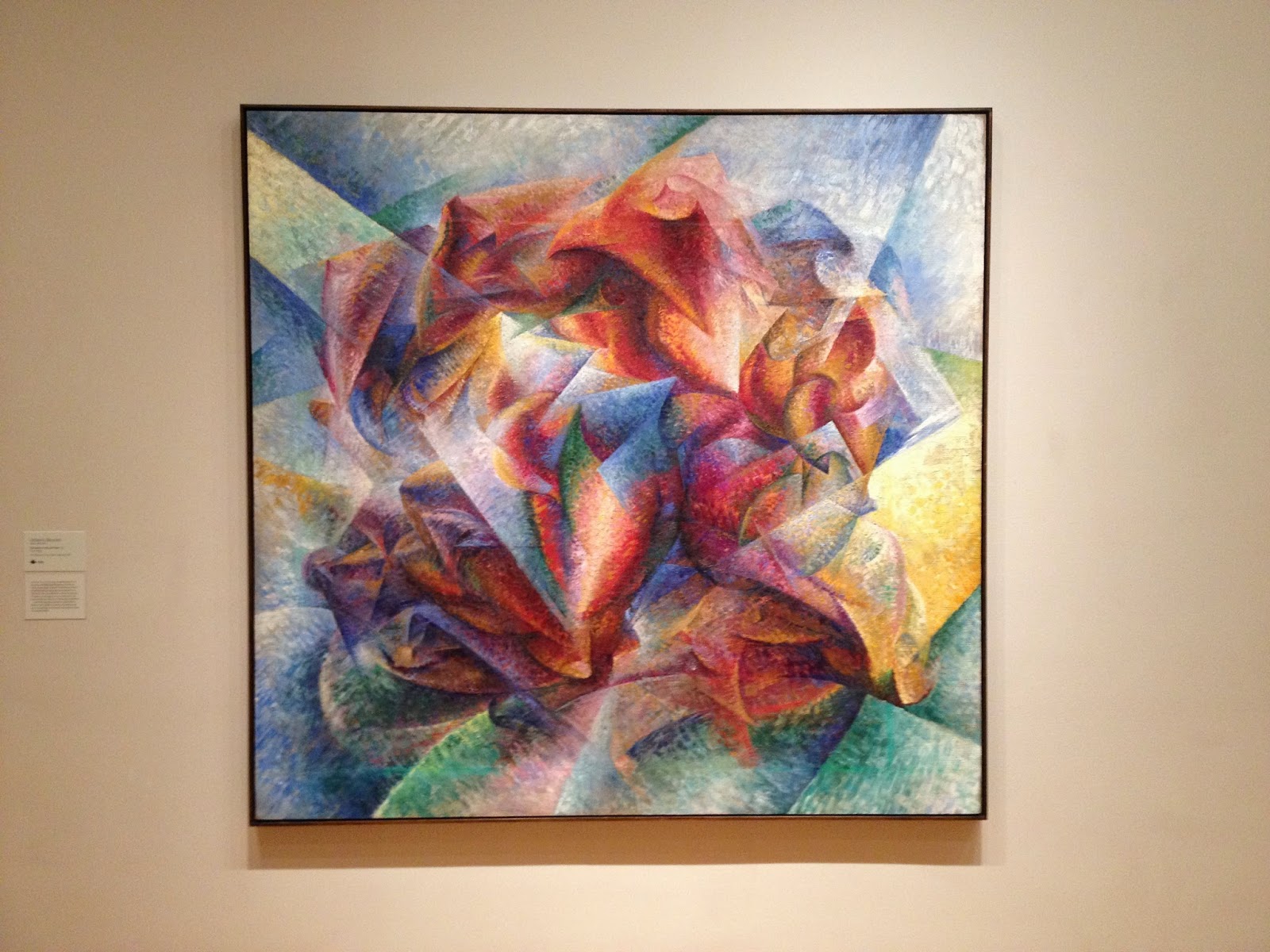 Unfortunately, I simply ran out of time.  You can only visit the Tenement Museum on timed tours, and I had decided to book two tours. The first, a food tour of the neighborhood, started at 1 pm.  The second, a tour of the tenement focusing on sweatshops started at 3:15.

The food tour was fantastic but a little chilly, even with all my outer garments.

The idea was to sample the various foods immigrants have brought to the Lower East Side from the middle of the nineteenth century to the present.   Here's the Tenement Museum on Orchard Street (photos were not permitted inside): 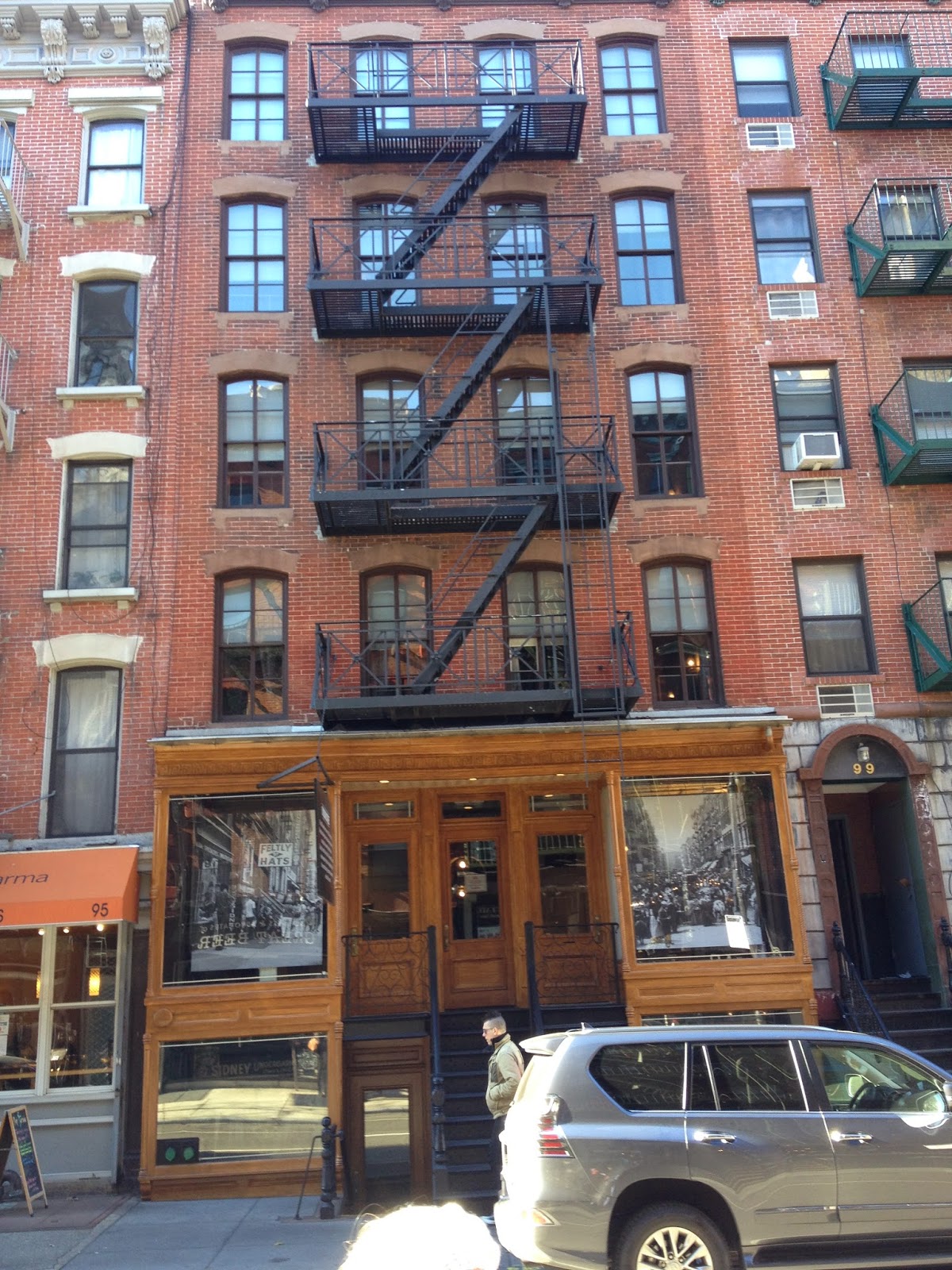 One of the original businesses in the basement was a beer saloon.  In the 1860s, there were four beer saloons on just this one block of Orchard.  One of my great, great grandfathers, the first to immigrate to the United States, had just such a beer saloon in the 1870s a few blocks over on Houston St.

To celebrate the food of these mostly German-owned business we had pretzels (made by a local Austrian cafe) with two dipping sauces:  mustard with horseradish and a mixture of butter, farmer's cheese and paprika (which I had in Budapest). 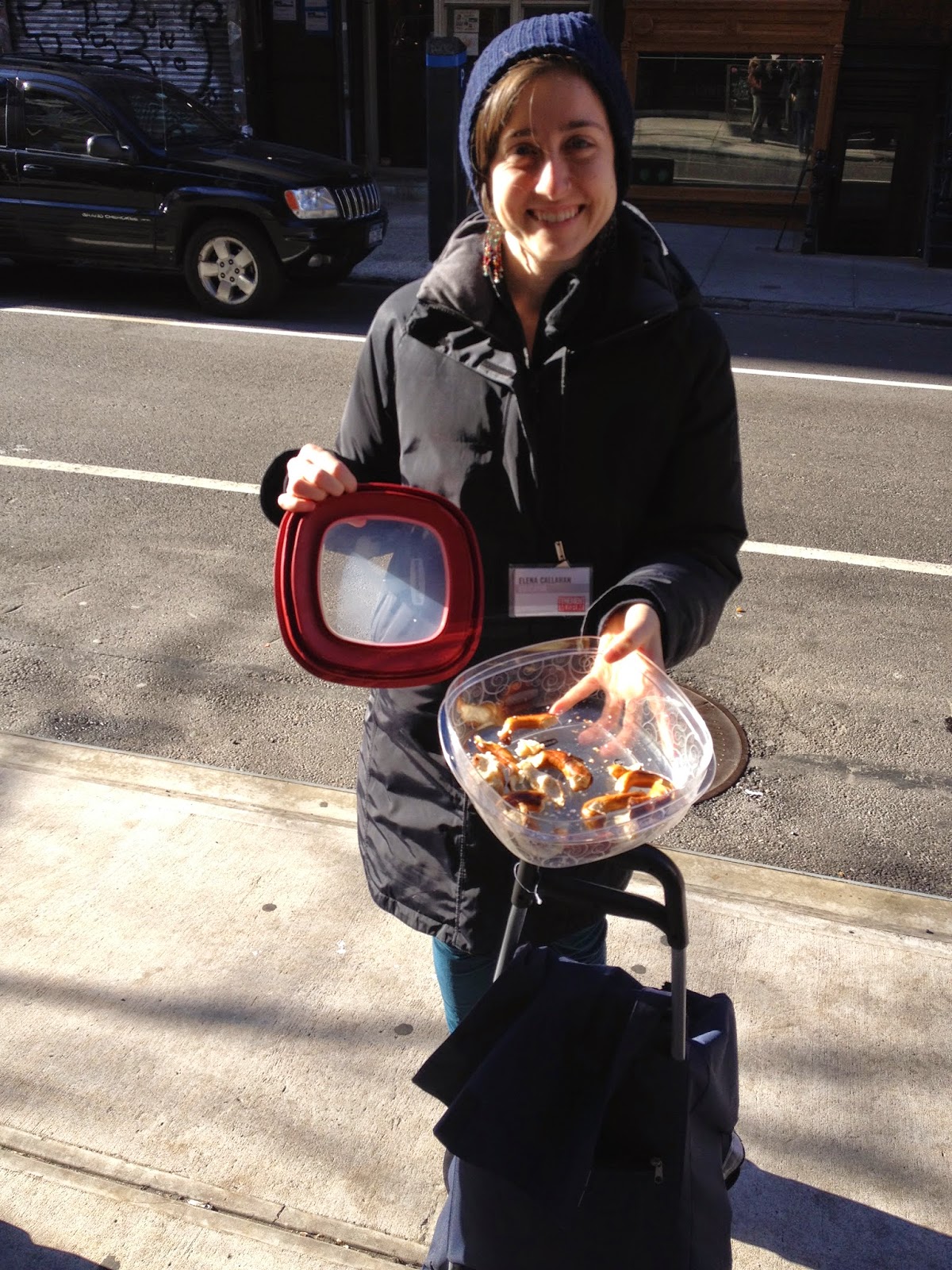 As you can see, here as everywhere else on the tour, we didn't enter the food locale, but had the food brought to us.

From there we walked a few blocks to a popular, kosher pickle shop called, not surprisingly, "The Pickle Guys." 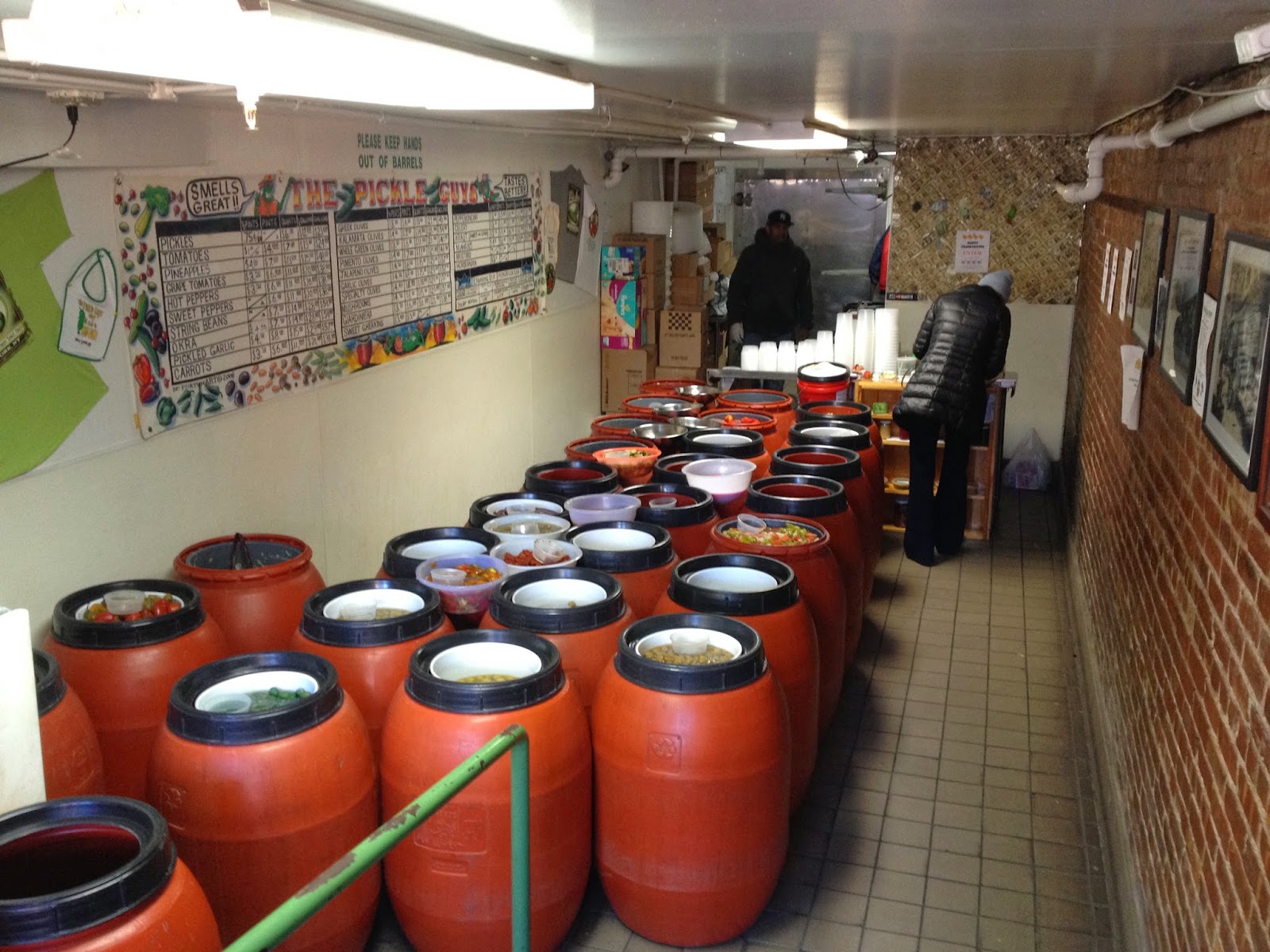 There we had two sets of pickles. The first were these traditional sour pickles, that had only been pickling for about a week. They were yummy, but I think we were all blown away by the pickled pineapple (with some chili pepper). Wow! Absolutely fantastic!

Our third stop was for bialys!  We heard a little about why the bialys never caught on like their more popular cousin (hint: they go stale very fast).  Then we got to sample bialys with a "shmear" of cream cheese. 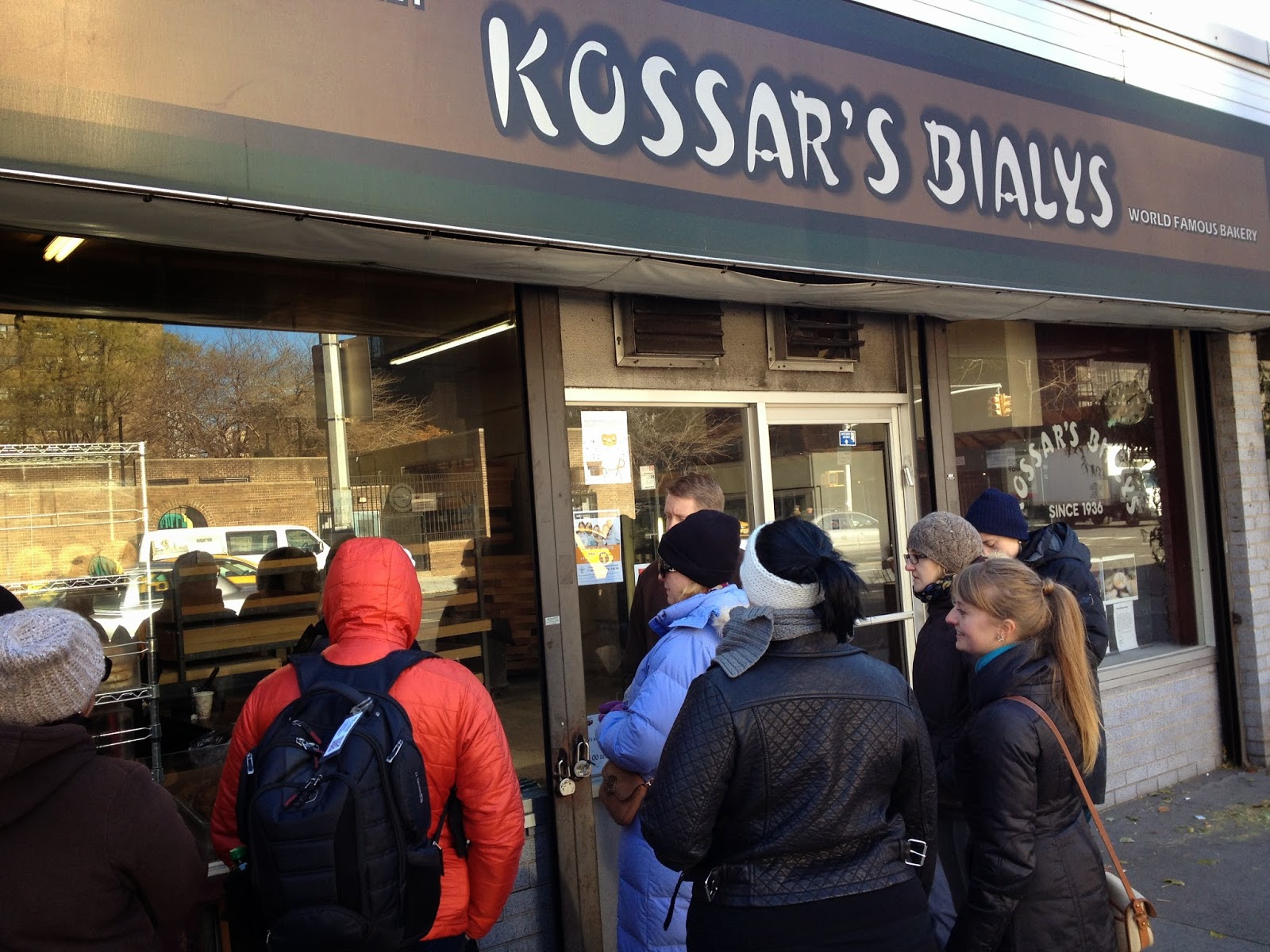 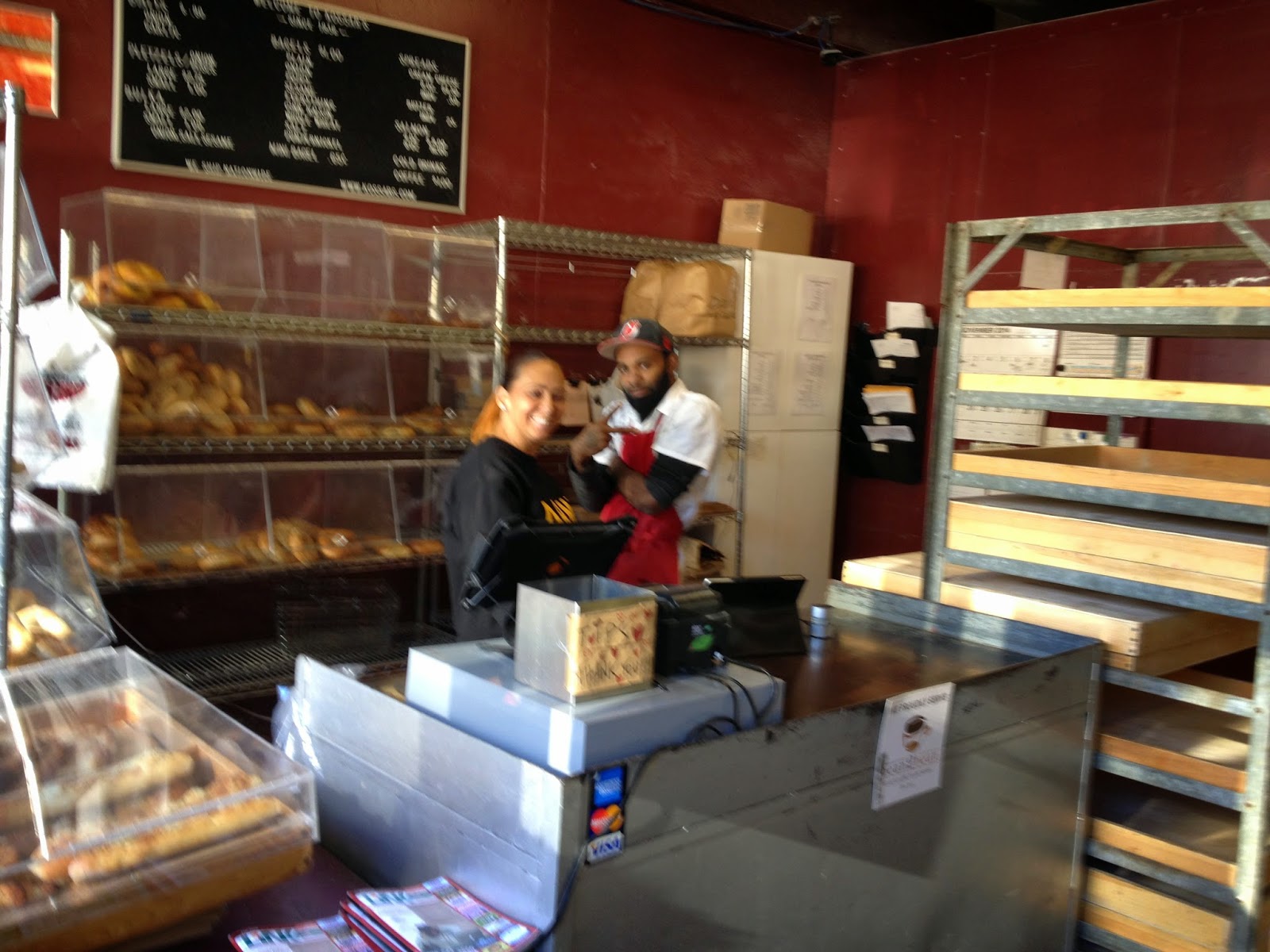 From there we headed over to the Essex Street Market, where we learned how angry shop owners tried to shut off competition from food carts by banning them from selling food on the streets.  Instead, the cart owners found a home in the newly created Essex Street Market.  Now the place is a mix of high end retailers and low end groceries.  The shop keepers don't like the tours taking pictures so we were asked not to.  I snuck back later, however, and took a few shots indoors.  Here's an example of one of the high end stores:  a clearly hipster-owned and operated "Brooklyn Tacos" stand: 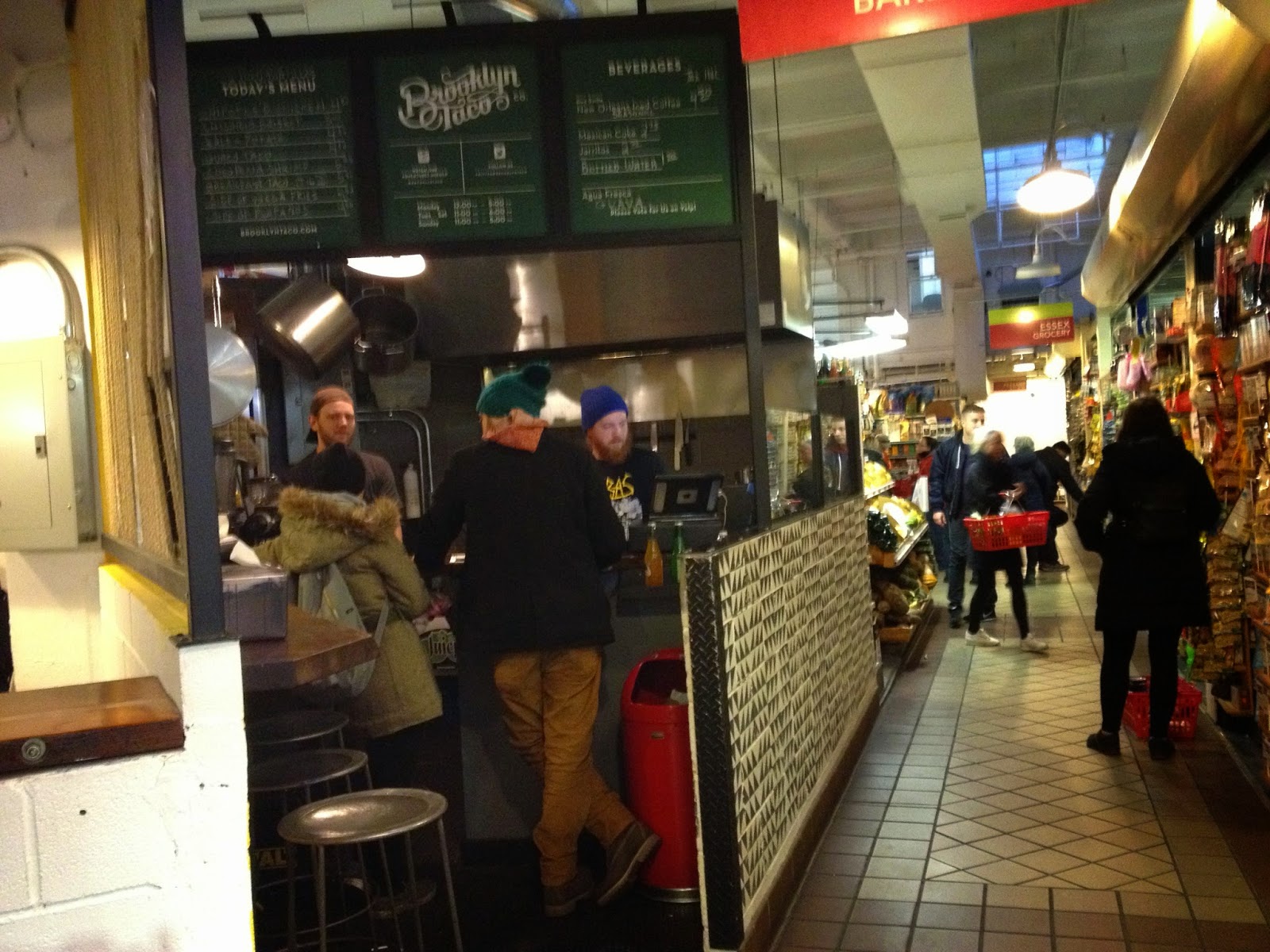 By now we had passed the 1940s and started moving towards more contemporary immigrants.  Our next stop was the Dominican restaurant, El Castillo de Jagua where we ate tostones, a snack made from fried green plantains: 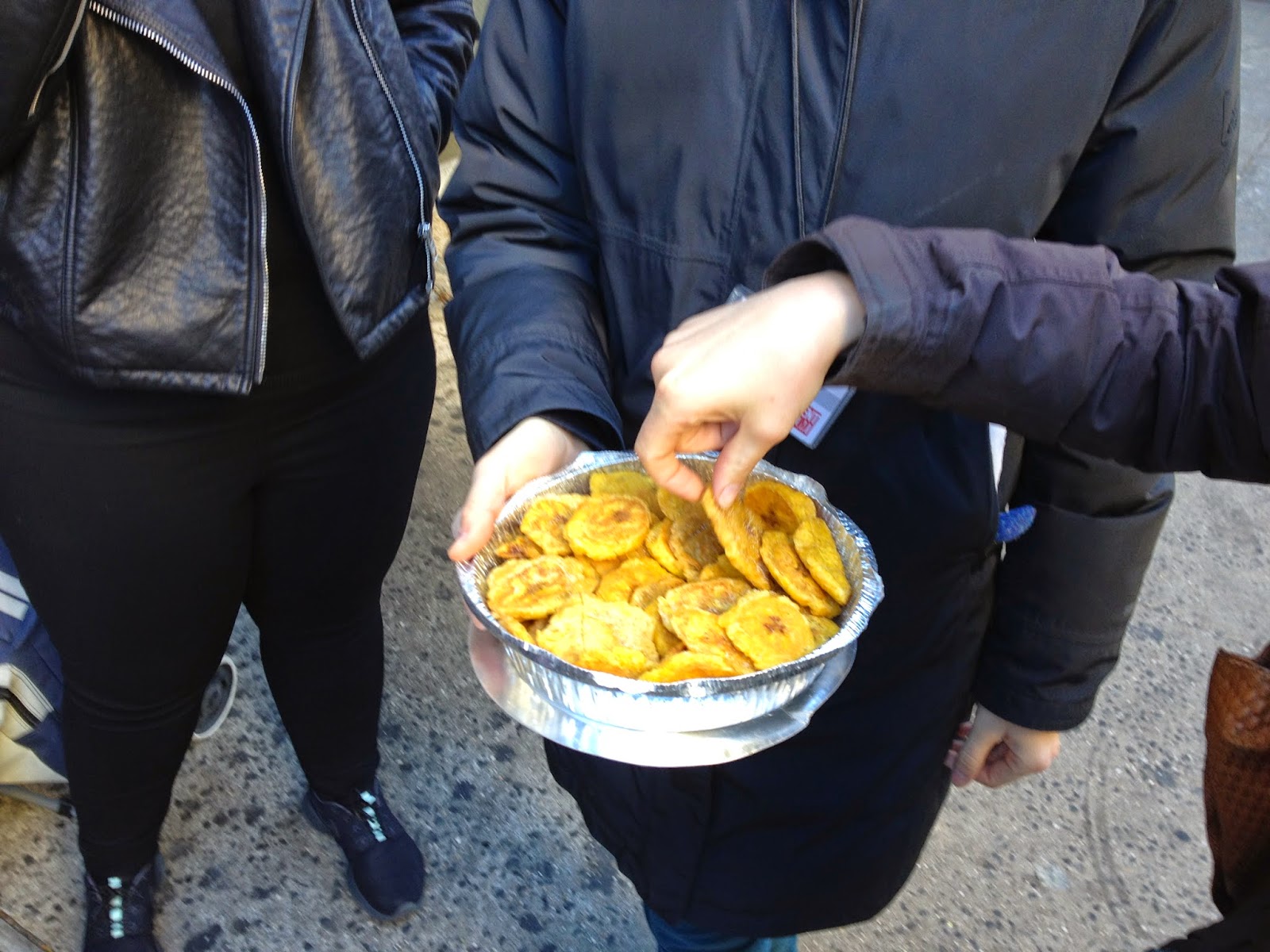 After that we walked around the neighborhood, trying some chocolate covered pretzels from "Economy Candy" and some high end Chinese cream puffs with black sesame filling.  I focused on the over all feel of the neighborhood. 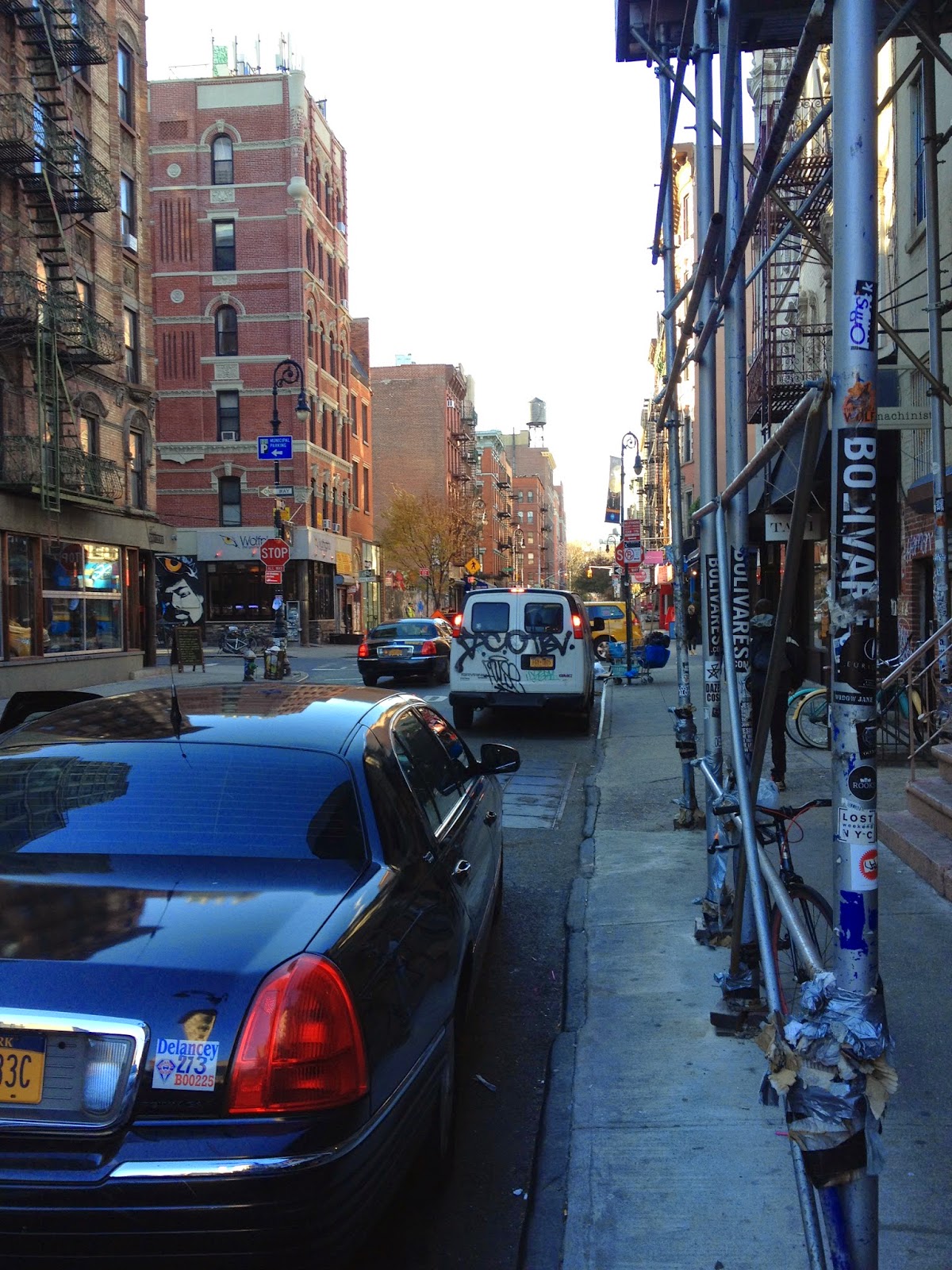 Our tour ended back at the Tenement Museum with some contemporary Chinese dumplings.

The tour of the Tenement House started a few minutes after the food tour ended.  There are a couple different themed tours you can take.  I took the Sweatshop tour, which looks at two Jewish families who lived in the building:  the Levines who lived there in 1900, and the Rogarshevskys from 1910.  They had a few items on display and I noticed a flyer in Yiddish for learning English fast from the "Brooklyn Preparatory School."

The hallways and rooms of the tenement building are appropriately decayed.  The building was not upgraded to meet the 1935 housing code (which required them to replace the wooden stairs with metal ones), so the upper floors remained vacant until the museum acquired the building.   One can only imagine how hot it was in those apartments in the summer with the heat from so many people living and working there.  Sweatshop indeed.  They estimate that 7,000 people lived in this building for some amount of time between 1863 and 1935.

Afterwards I walked around the neighborhood for a bit, but it was getting colder and the sun was setting.  By 4:15 pm, the sun had nearly set. 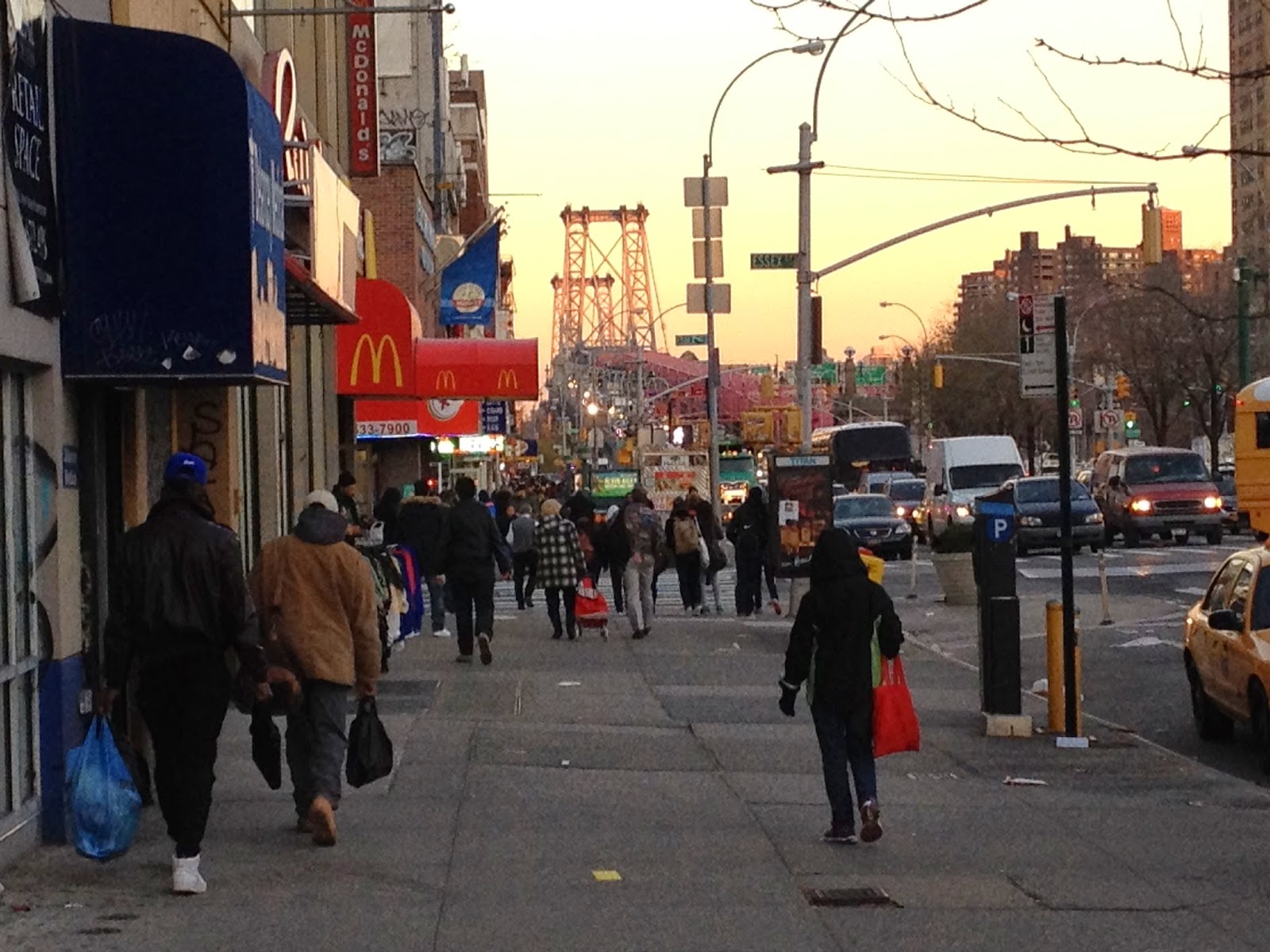 It's hard for me to get used to how little daylight there is here in the fall and winter.

For dinner tonight, I stayed in the neighborhood.  I went back to the Greek-owned diner and had their
pastitsios: 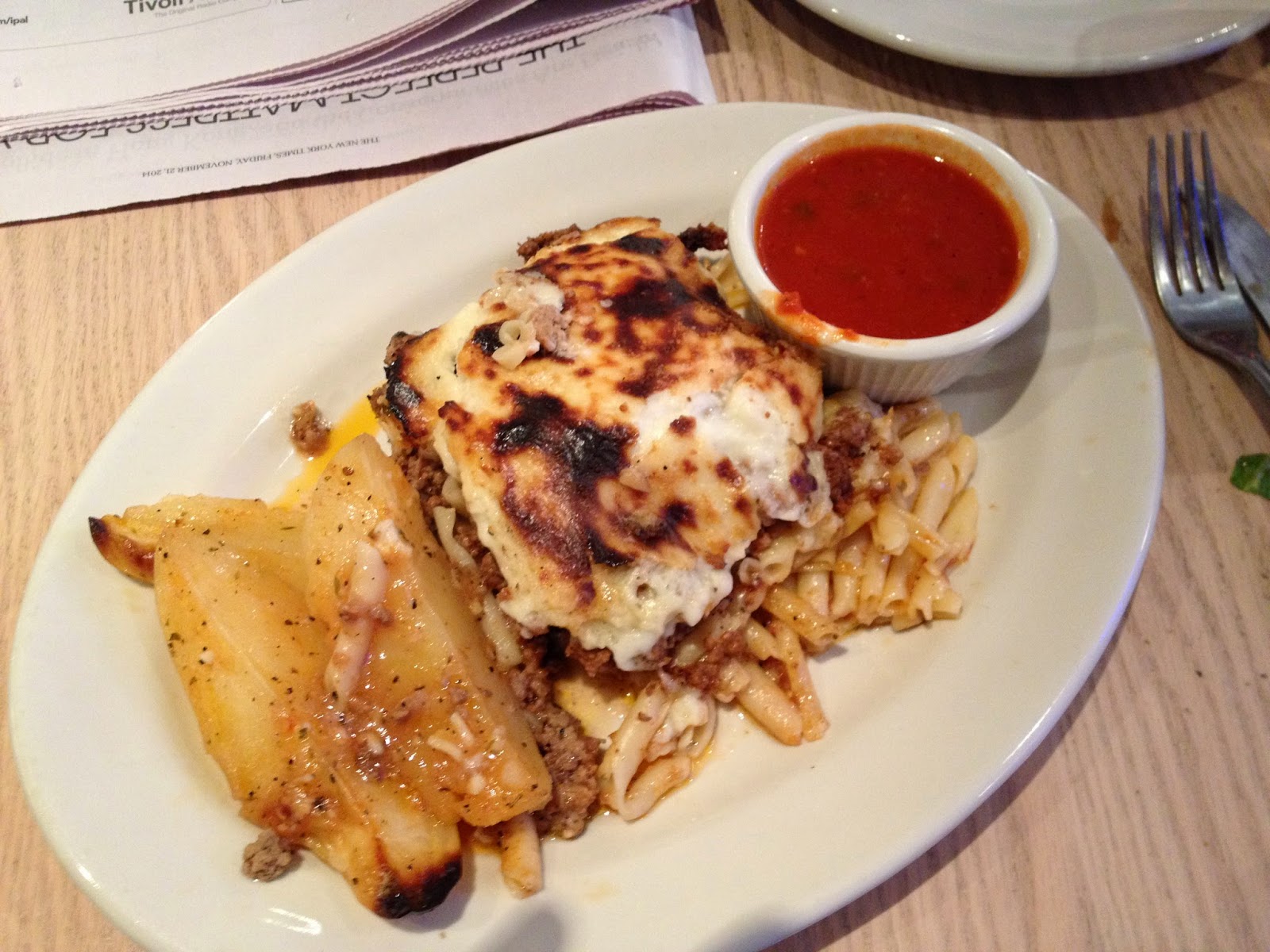 It may seem like a lot of food (and it was, though I skipped the potatoes), but then the only lunch I had were the snacks on the food tour.  I also got their homemade baklava: 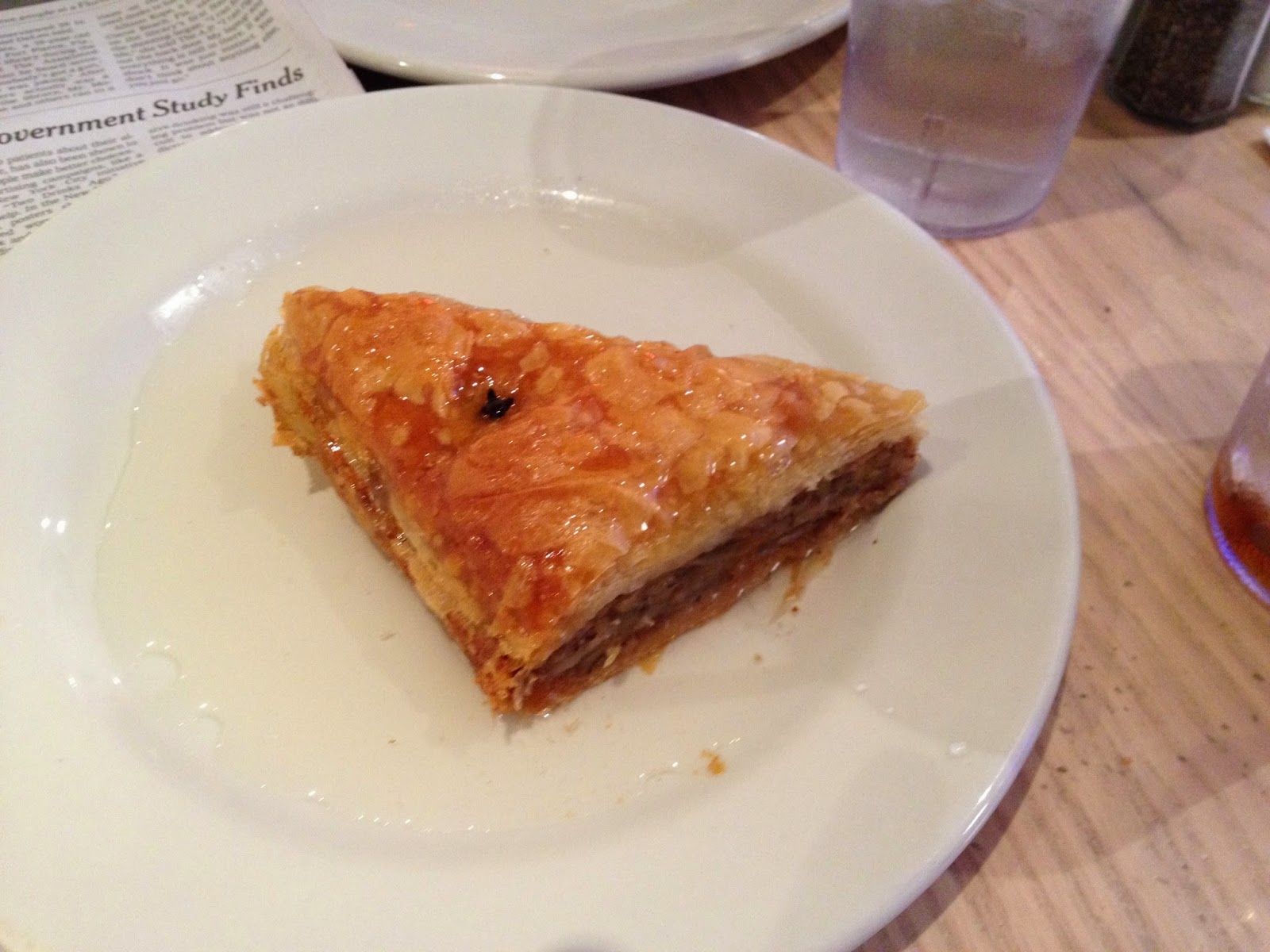 Tomorrow:  the weather warms into the 40s; I meet my uncle for breakfast at Barney Greengrass, and I visit the Neue Galerie.
Posted by J.B. at 6:39 PM