Well, the good weather couldn't last.  This morning the grey skies, cold winds, and wet drizzle returned.  No more walking around Paris with my jacket off and my long sleeves rolled up as I did yesterday. 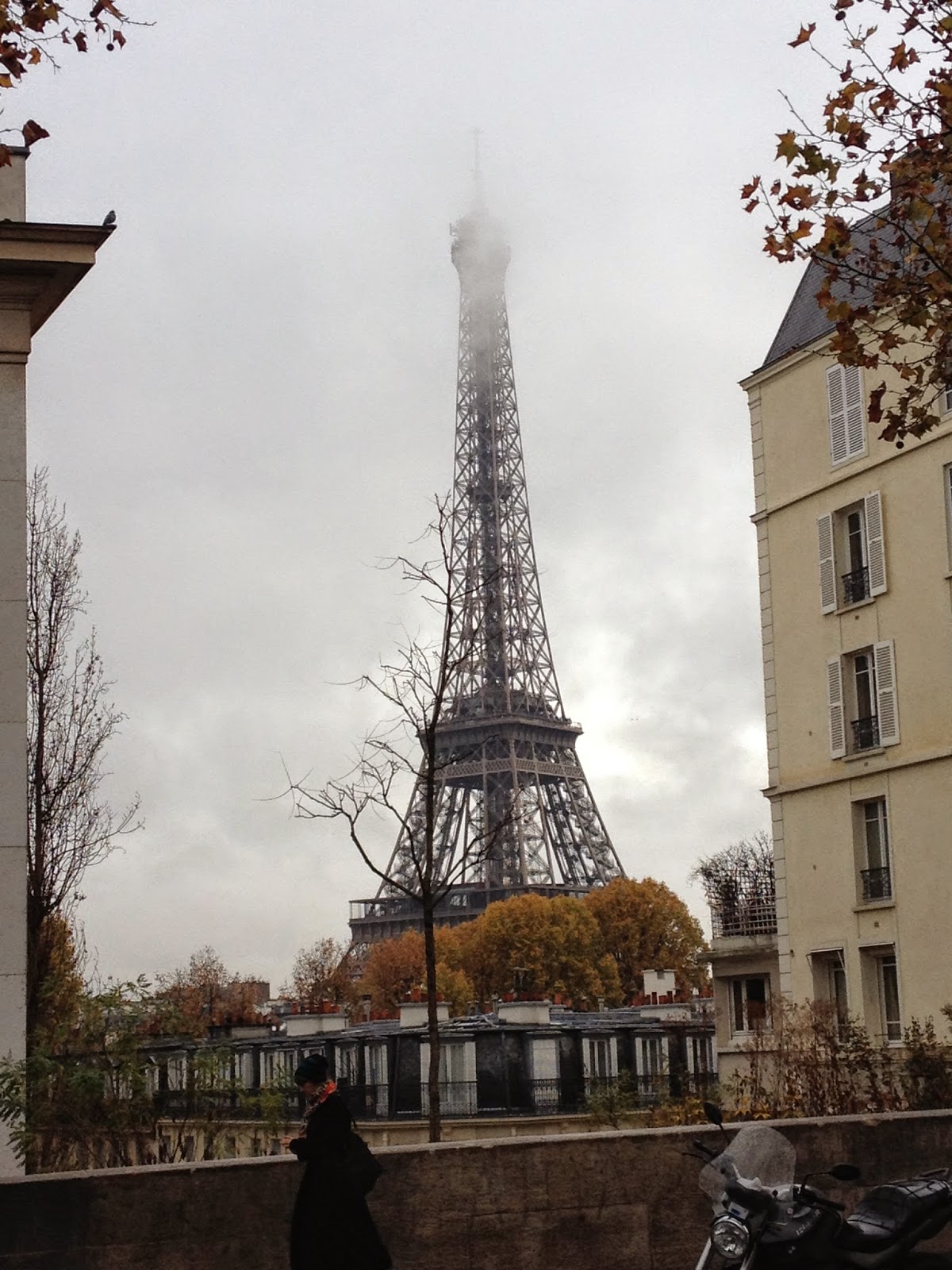 I decided to check out the Musée d'Art Moderne, which is having a big retrospective on Sonia Delaunay (and whose husband, Robert, has his own smaller retrospective now at the Centre Pompidou).  She and her husband moved quickly from Fauvism to abstractism, though unlike the post-war abstract artists, their paintings were full of life and joy.  A typical title might be "Tango dancers" or "electric circles."

The Delaunays were vacationing in Portugal when the Great War erupted and I was curious how the war would affect her art.  When they returned to Paris in 1919, she moved into designing fabric and clothing, applying her abstract forms and bright colors to the world of fashion.

In 1937, she and her husband participated in designing the Palais l'Air for Exposition Internationale des Arts et Techniques dans la Vie Moderne held in Paris. The pre-war tensions were keenly felt as the Soviet and Nazi German pavillions were located opposite other on the Champs de Mars.  The Palais l'Air was intended as a celebration of all things aviation and meant to be visible both day and night through the glass walls.  Huge murals graced the building, three of which were made by Sonia Delaunay.  I was not allowed to photograph any of her pieces, but because of the way the exhibition space was designed, I did manage to sneak this one of her mural celebrating the propeller: 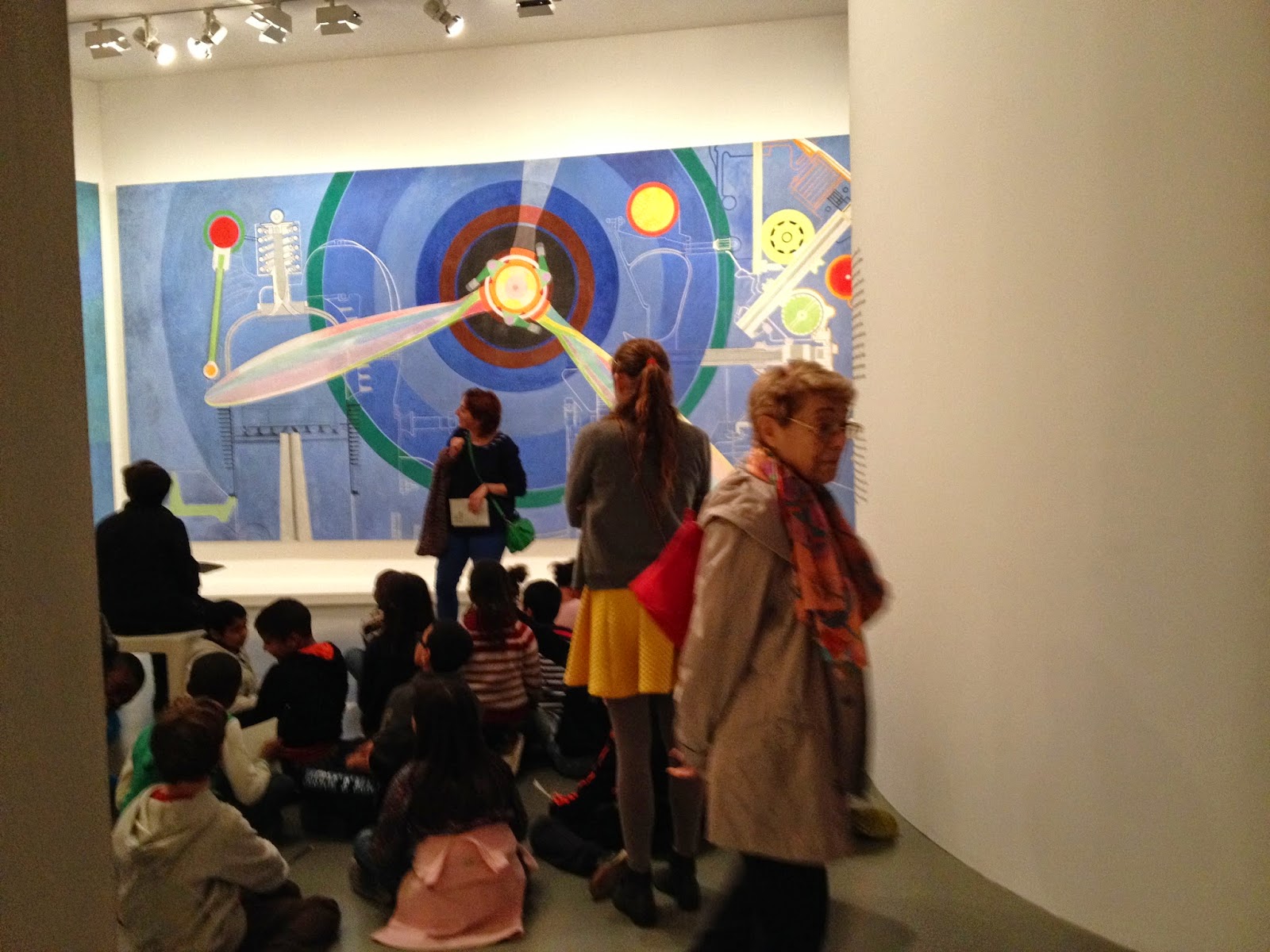 In many ways, this is totally atypical for her work, since the propeller has been rendered almost with engineering precision.  It's her use of colors, particularly the colored circles, that mark this as her style.

I found the rest of the museum pretty much forgettable.  I did like this one painting by Raoul Dufy, very much in the manner of Matisse: 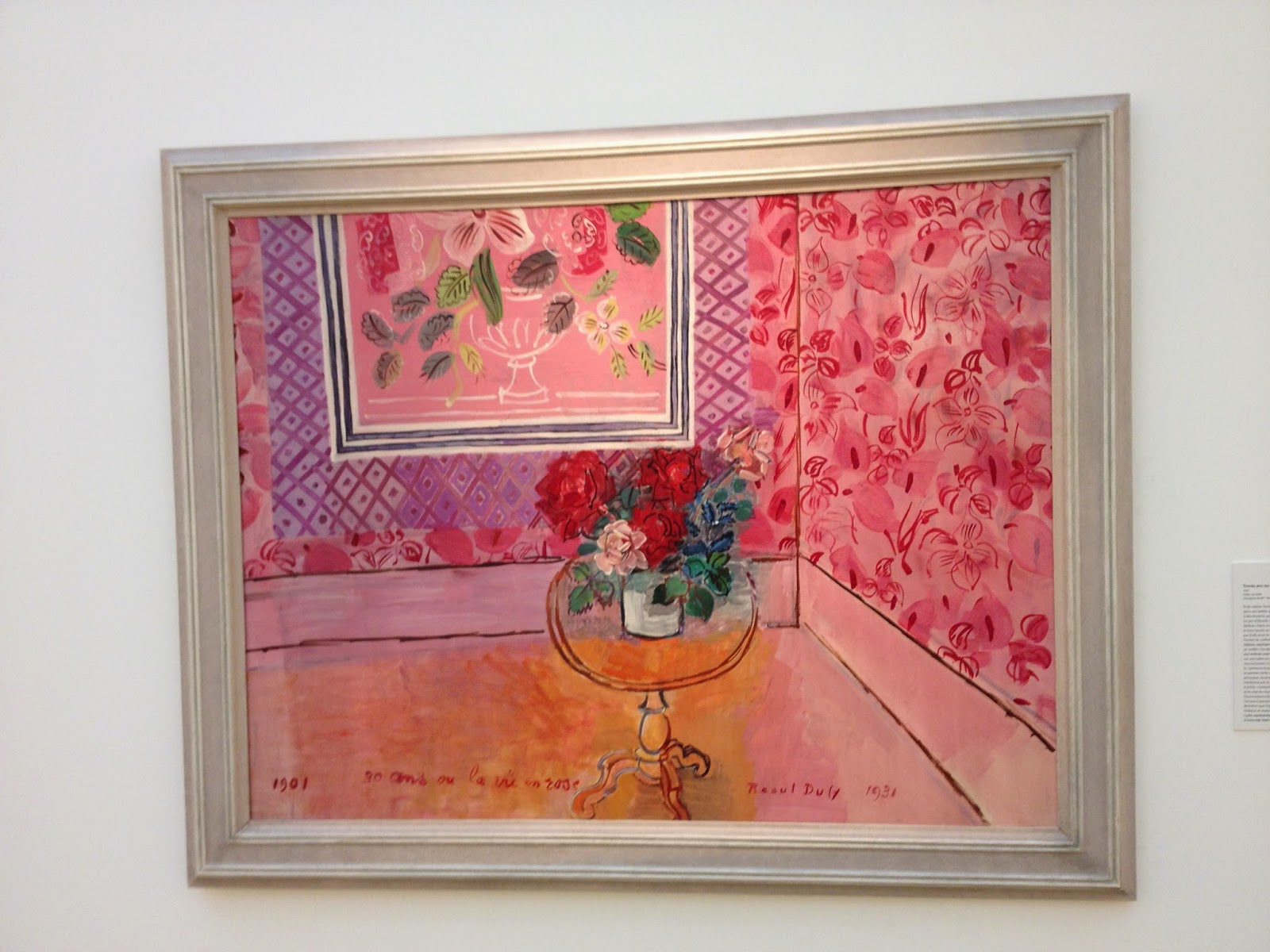 After that I headed out to find a place for lunch.  Given the constant wind and drizzle, buying a sandwich and sitting outdoors was never going to be an option.  I did find one place where they had a formule gratin.  I had the gratin du jour, which was mushroom. 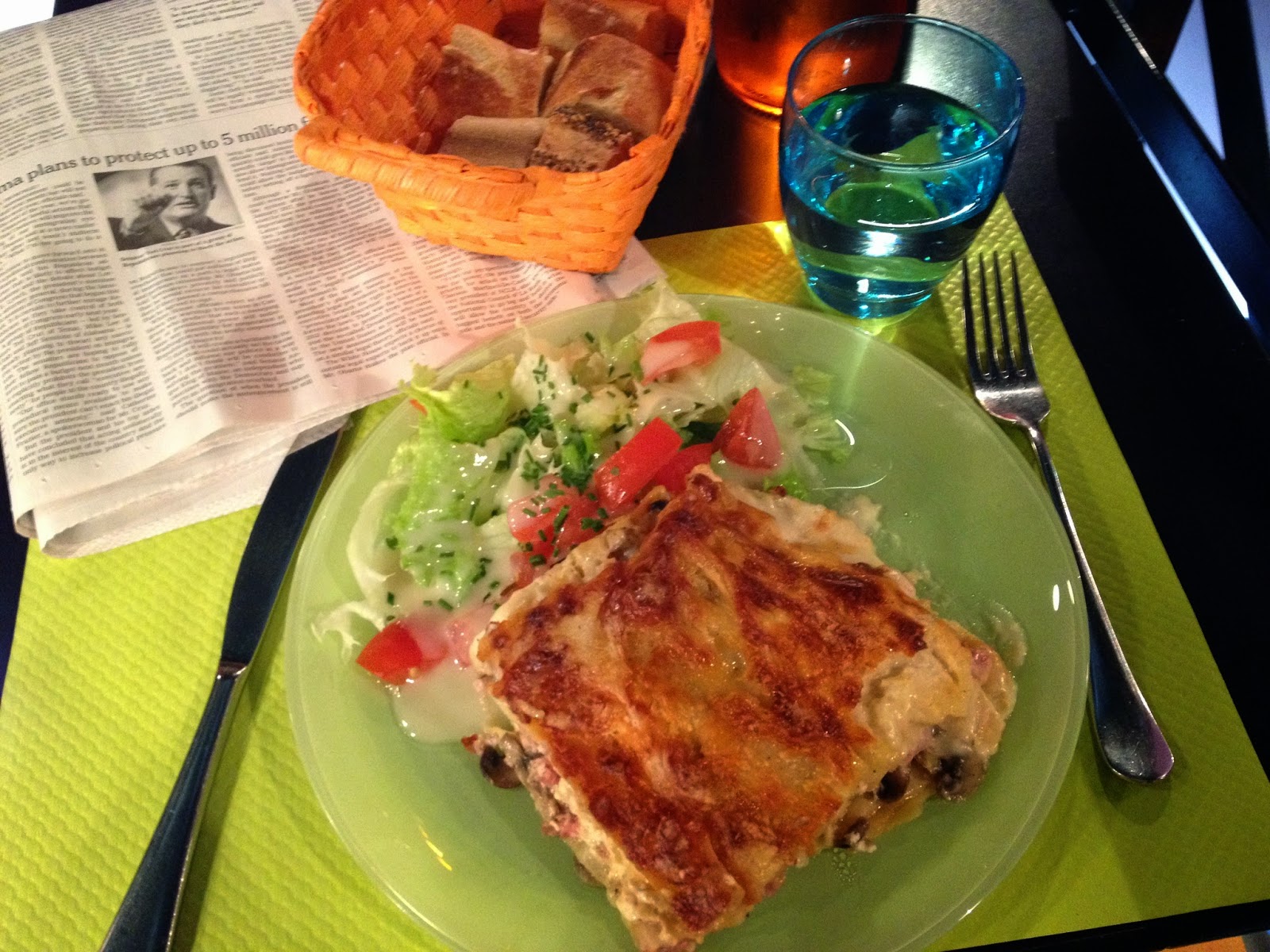 It came with dessert, so I ordered the flan.  For some reason, the waitress put it down point facing away (which no one else in Paris has ever done to me, nor did she do that to the other guests).  I had a paranoid feeling that she was trying to subtly dis me. 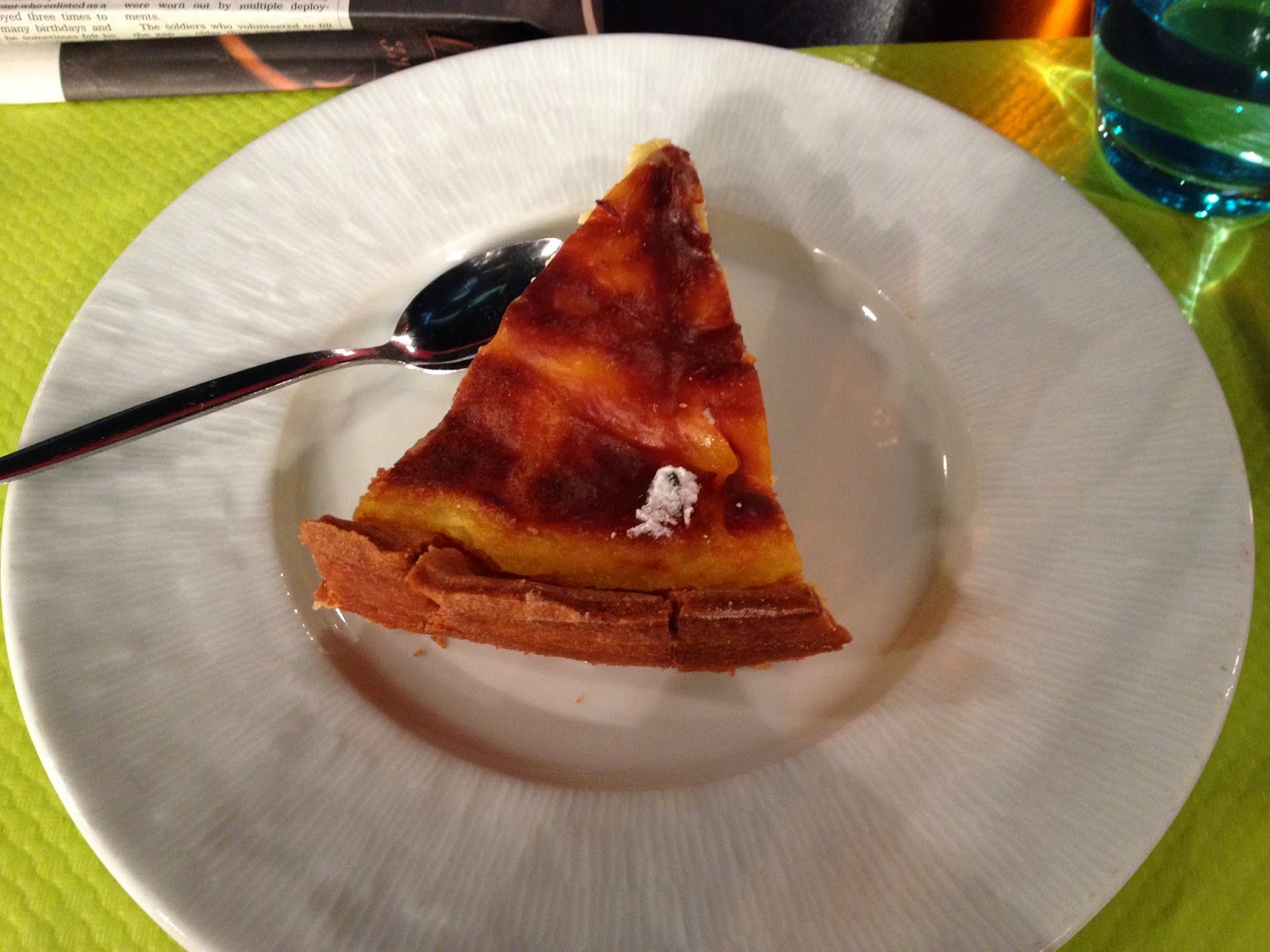 Still, it was tasty.

The rain had let up a bit, so I retraced my steps, but this time headed for the Musée Guimet.  This is dedicated to the art of south, south east, and east Asia.  I began with their gorgeous collection of Khmer art from Cambodia. 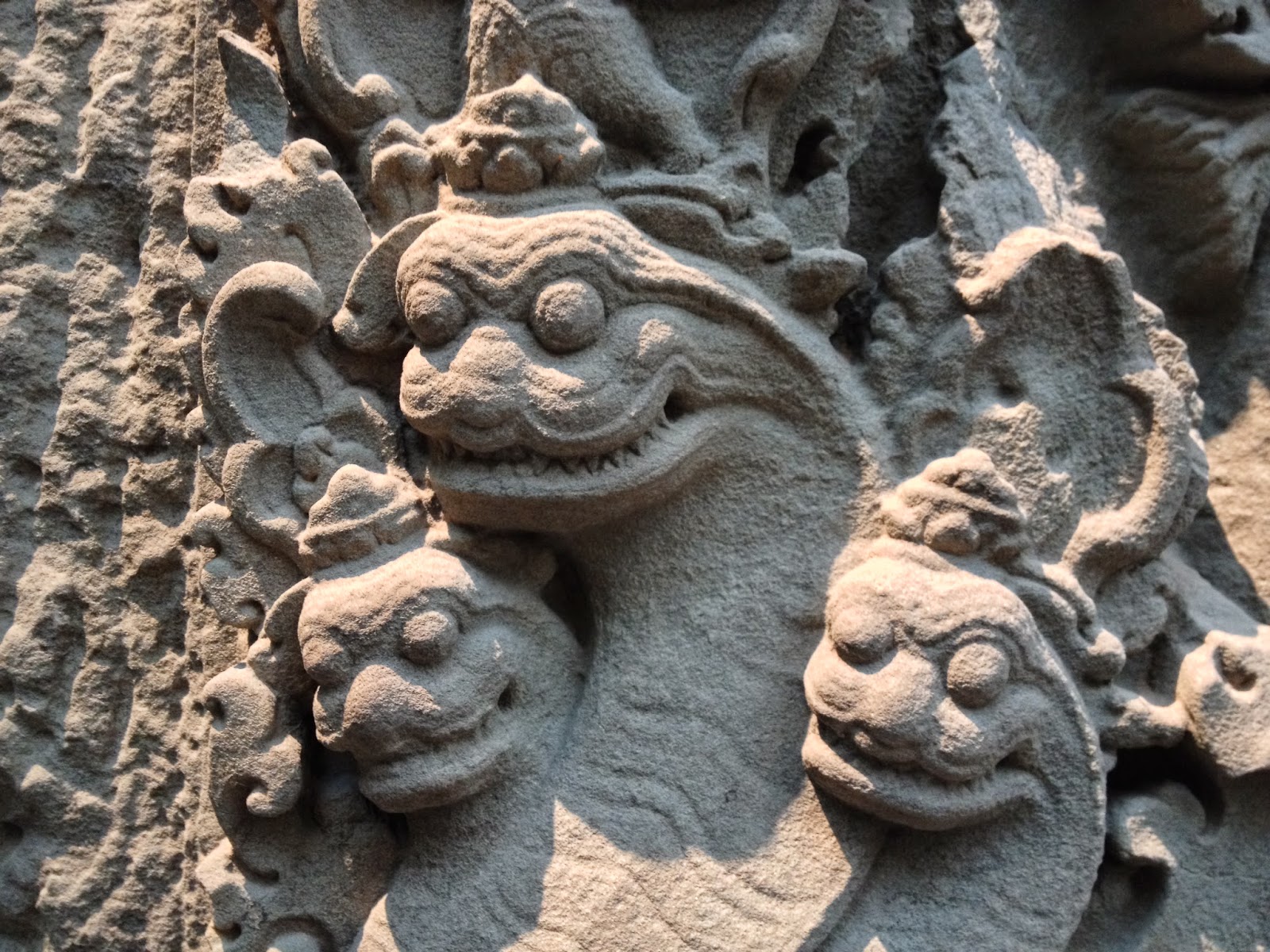 Lots of great pieces from the area around Angkor Wat, under French colonial rule since the latter part of the 19th century. 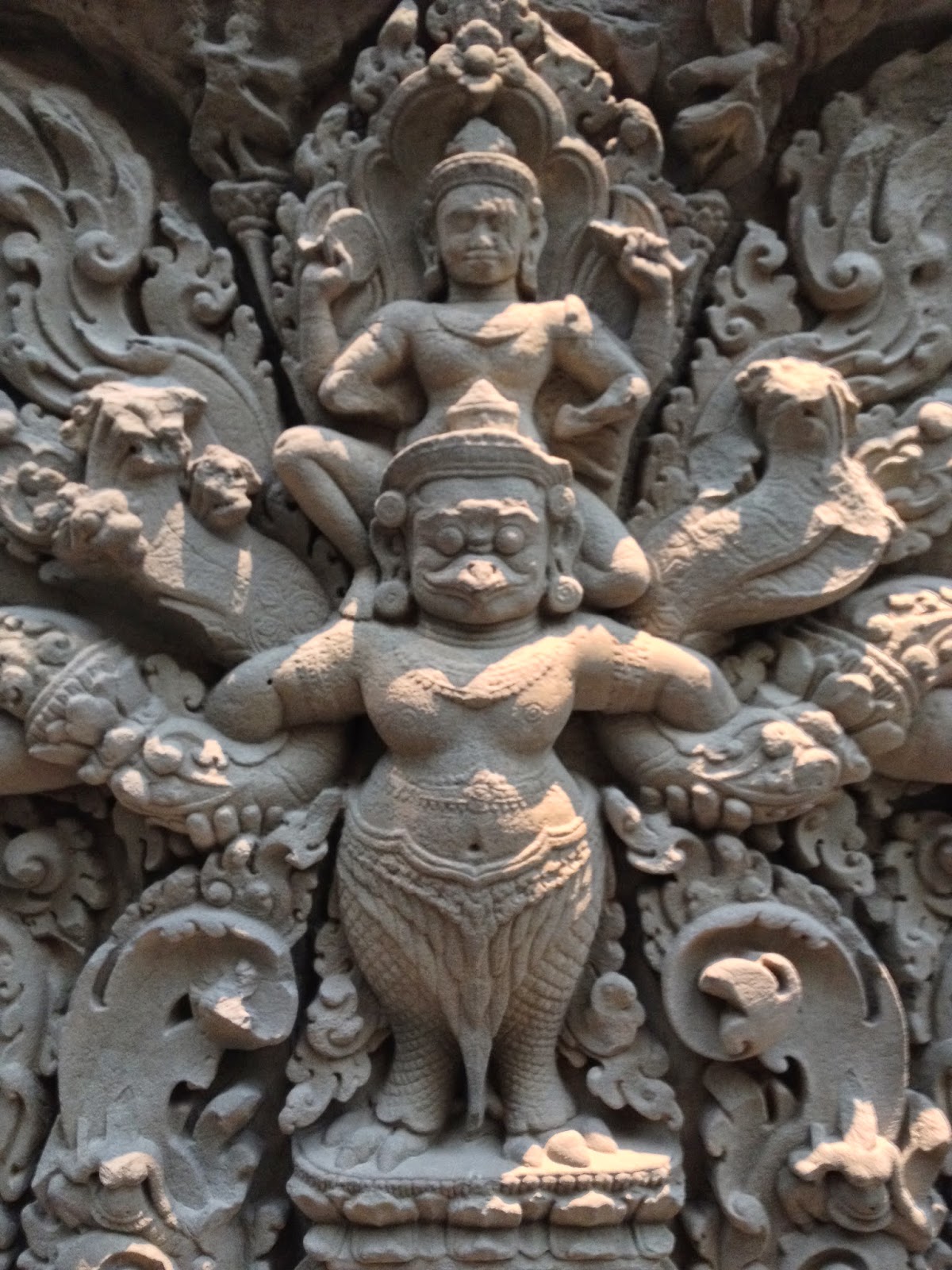 I think I saw this manuscript armoire in the Thai section: 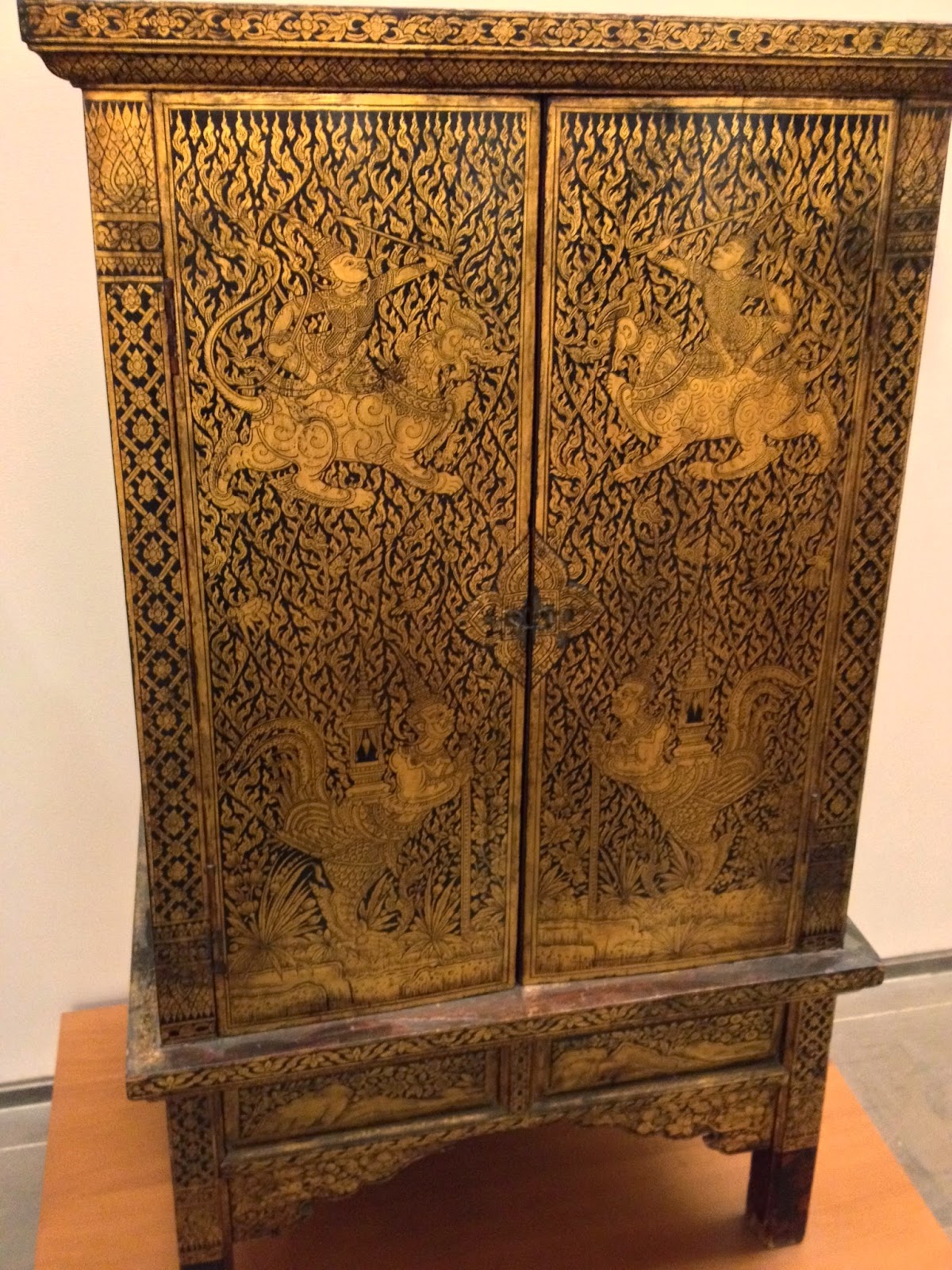 Perhaps it's just cultural stereotyping, but there seemed a lot more war-like imagery in the Japanese art section. 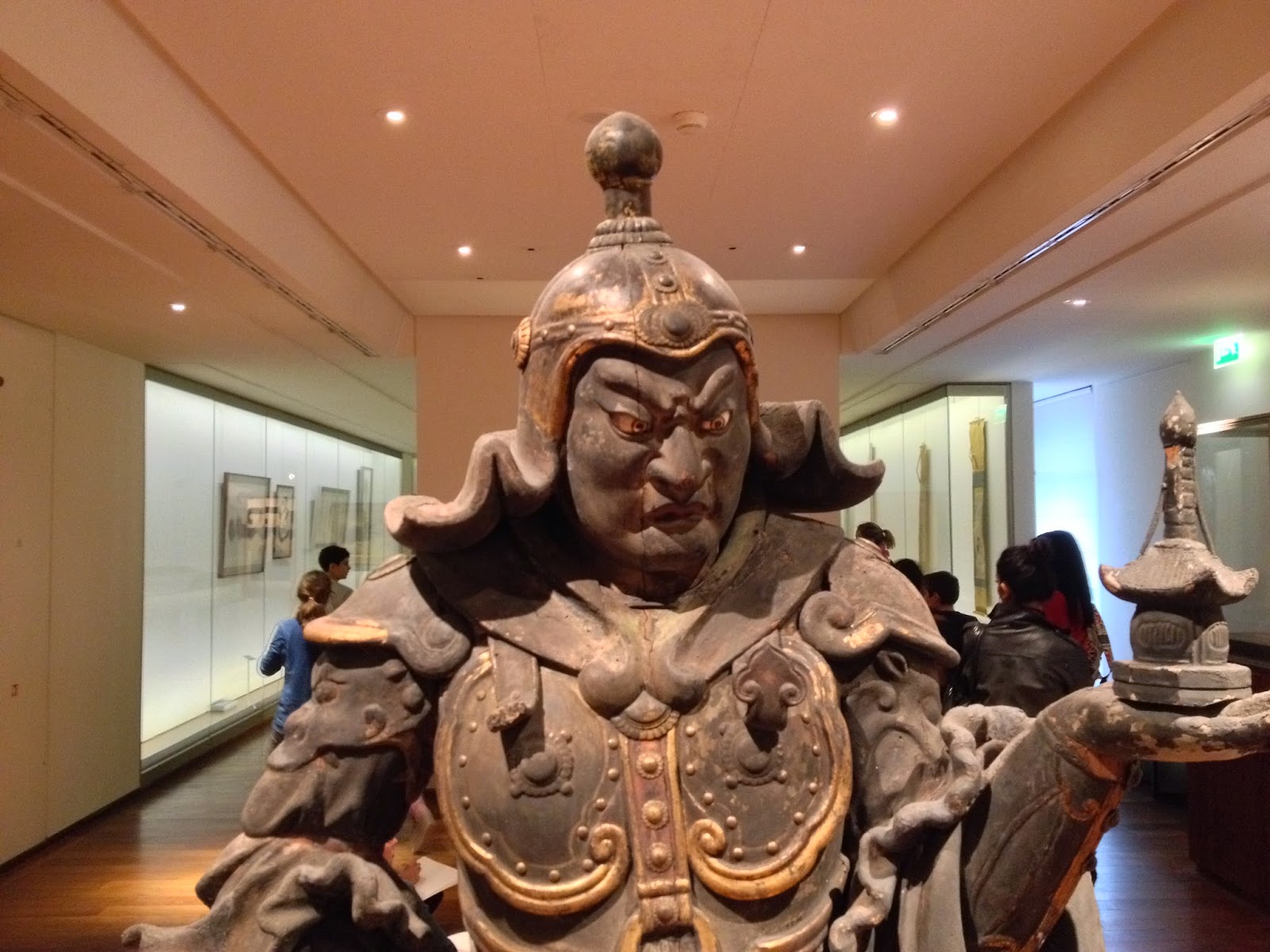 I also couldn't help noticing that none of this art, mostly acquired during France's colonial rule, ended up in the Louvre.  I guess that's only for Western art.

The weather had improved, a little, when I left as it had now stopped raining.  I decided to get some exercise and walked all the way to the Champs-Élysées, where, I discovered, the have now opened the annual Christmas village.  The entire length of the boulevard, all the way to Place de la Concorde, is now lined with these little shops, while the speakers blare Bing Crosby singing American Christmas songs.  Hell may not have frozen over, but I felt like I was in a cold hell. 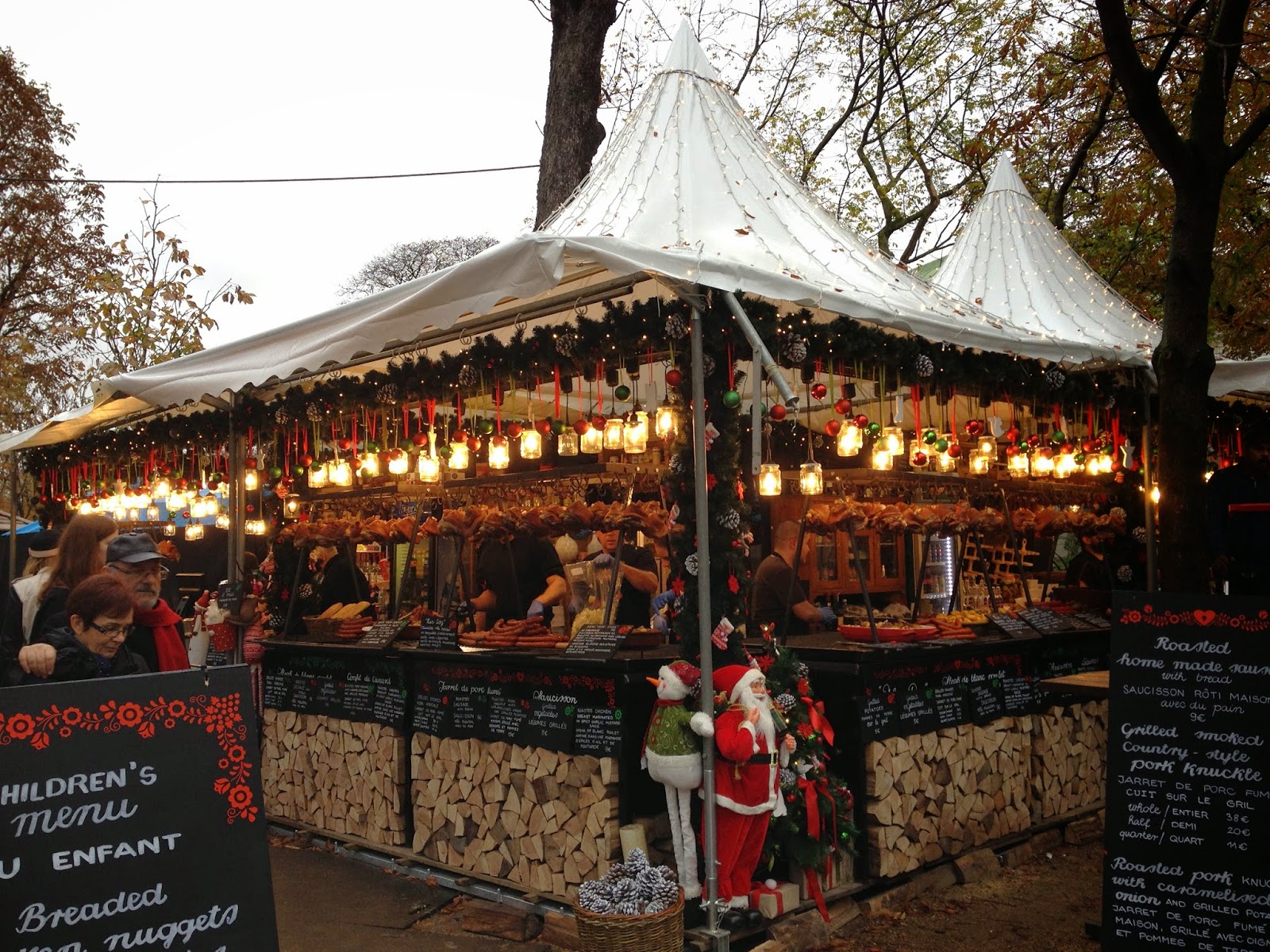 Everyone was selling vin schaud aka gluhwein or crepes or sausages. 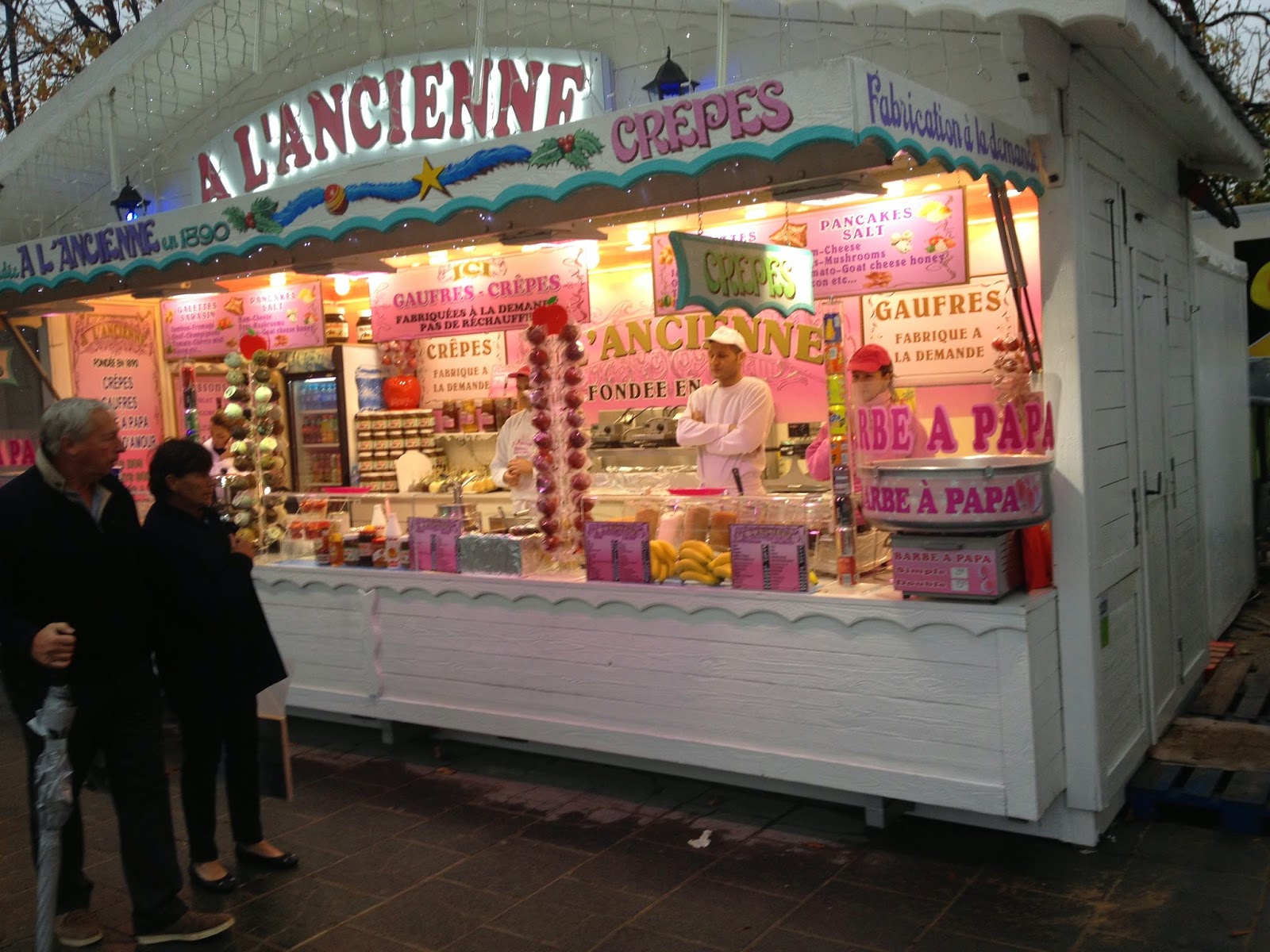 Eventually, I made it to Angelina on Rue Rivoli for my afternoon coffee and pastry. 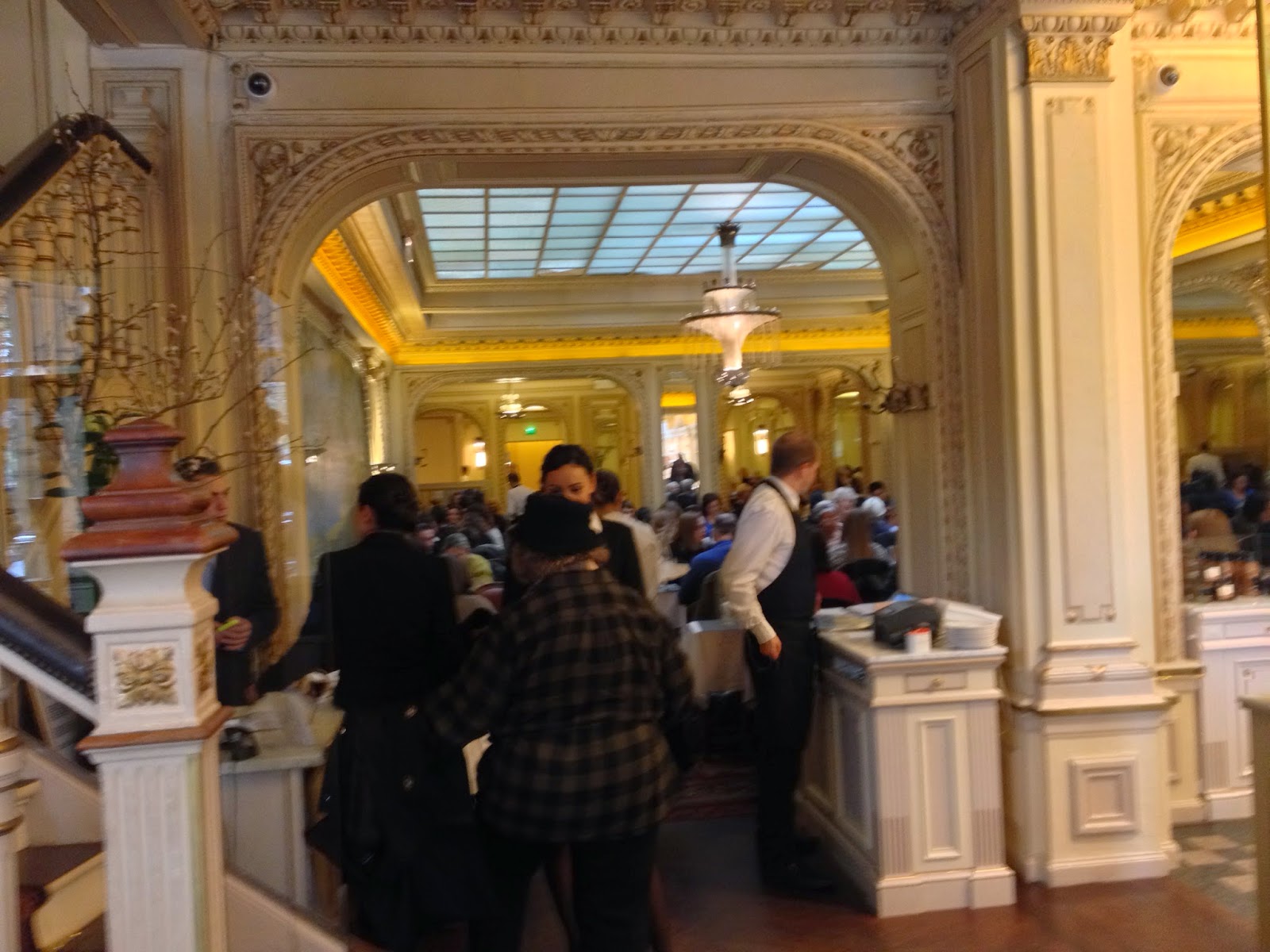 The other day, the line stretched out the door and down the block nearly to the corner.  Today, I only had to wait 10 minutes for a table.

I knew I was supposed to order something that this place is famous for, but I couldn't remember what.  I decided to get their éclair Mont-Blanc, which is like a regular eclair, but they fill it with chestnut pastry cream and cover the top with the same chestnut puree they use on the Mont-Blanc. 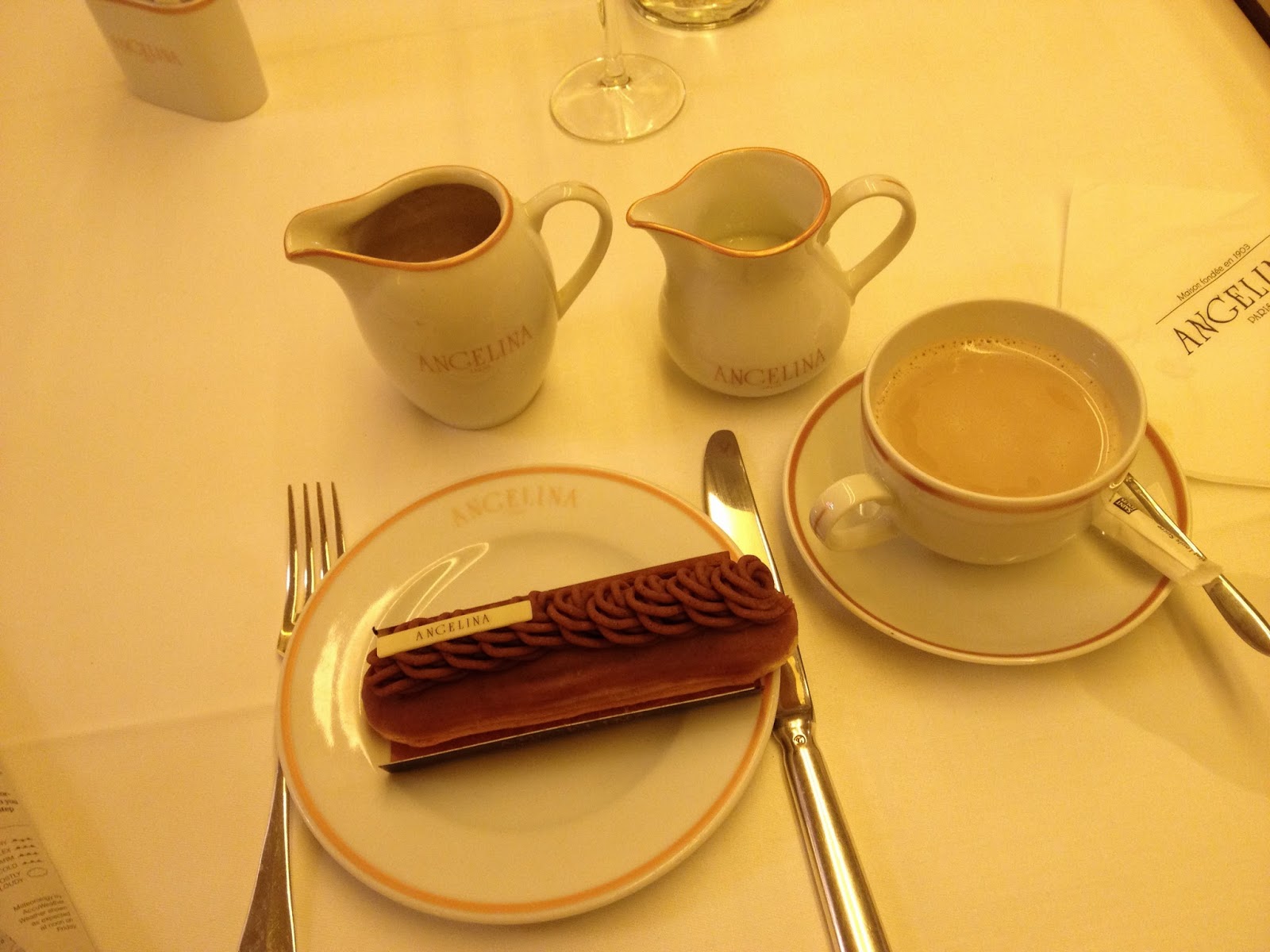 The little pitcher on the left has hot coffee while the one on the right has warm milk.

On my way home, I picked up my ticket for the RER train to get to Charles de Gaulle in the morning.

For my last dinner in Paris, I decided to head back to Le Picotin.  The menu doesn't change all that much from day to day.  I suppose it's really based on what's seasonal at the moment.  Here's tonight's menu (well, some if it, I missed the entrees).  What would you have ordered? 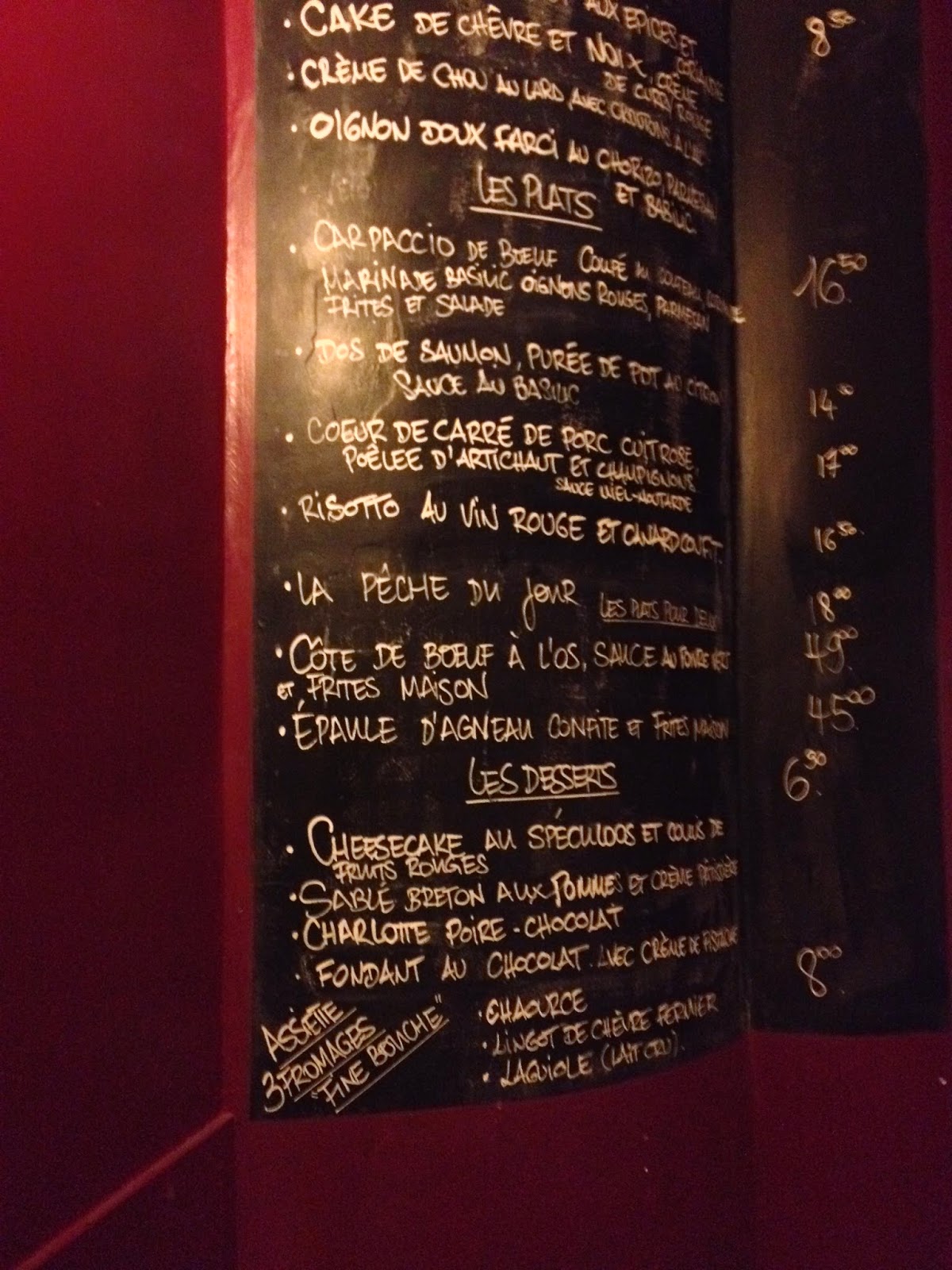 I didn't have a reservation and tonight that became a problem.  For a long moment, I didn't think I would get in.  The hostess agreed to seat me but on condition that I finish by 9 pm, when the table was reserved (it was 7:40).  I agreed.

Part of what sealed the deal was when I told her that this was my last night in Paris.  She offered me a complimentary glass of the red wine I ordered:  a Mourvèdre from the south of France.

It was such a cold night, I decided to start off with the crème de chou au lard avec croutons a l'ail. 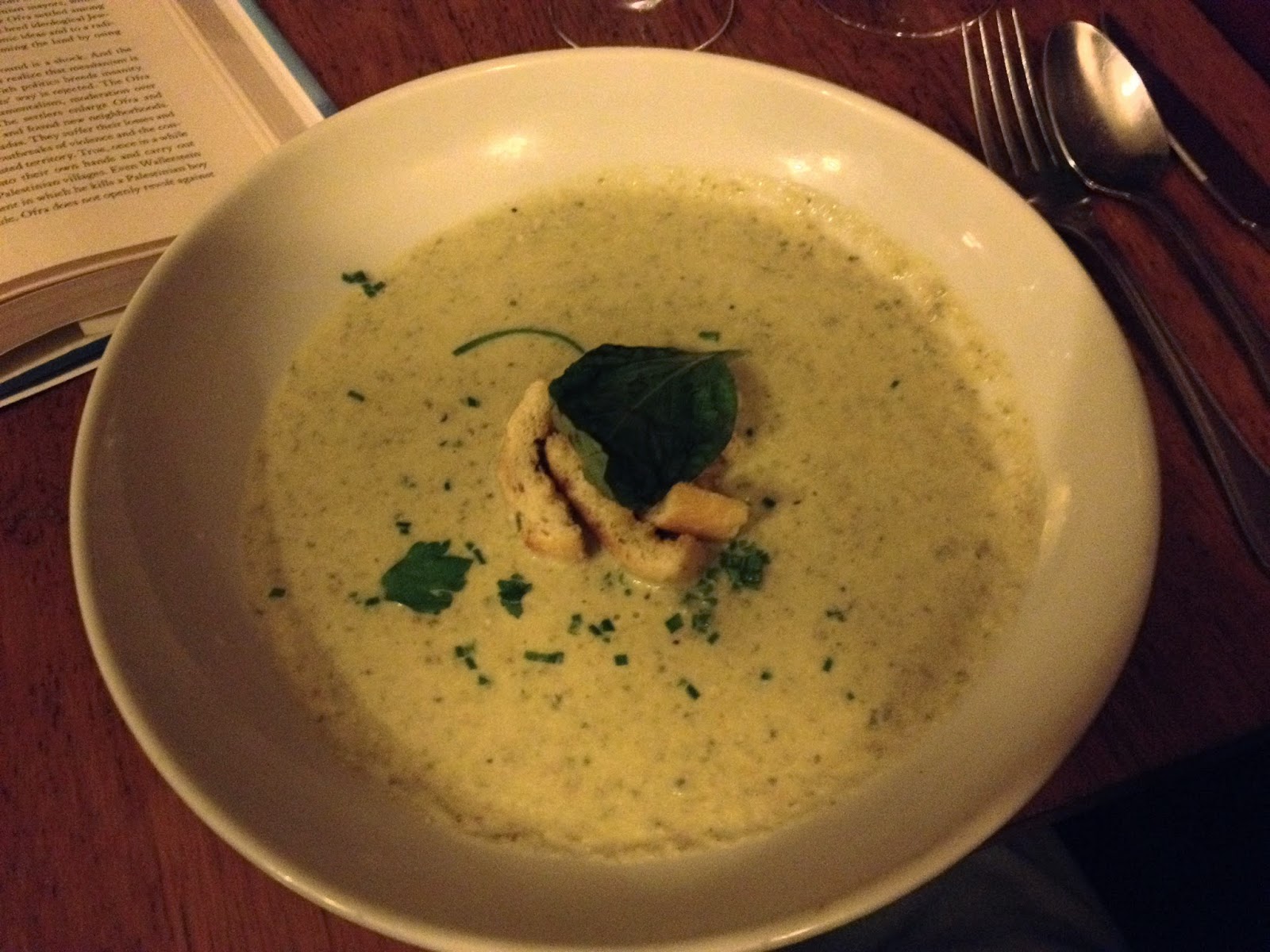 It was delicious and lightly garlicky.  The croutons were quite different than I expected; not hard and crispy at all, but barely toasted.  It was perfect. 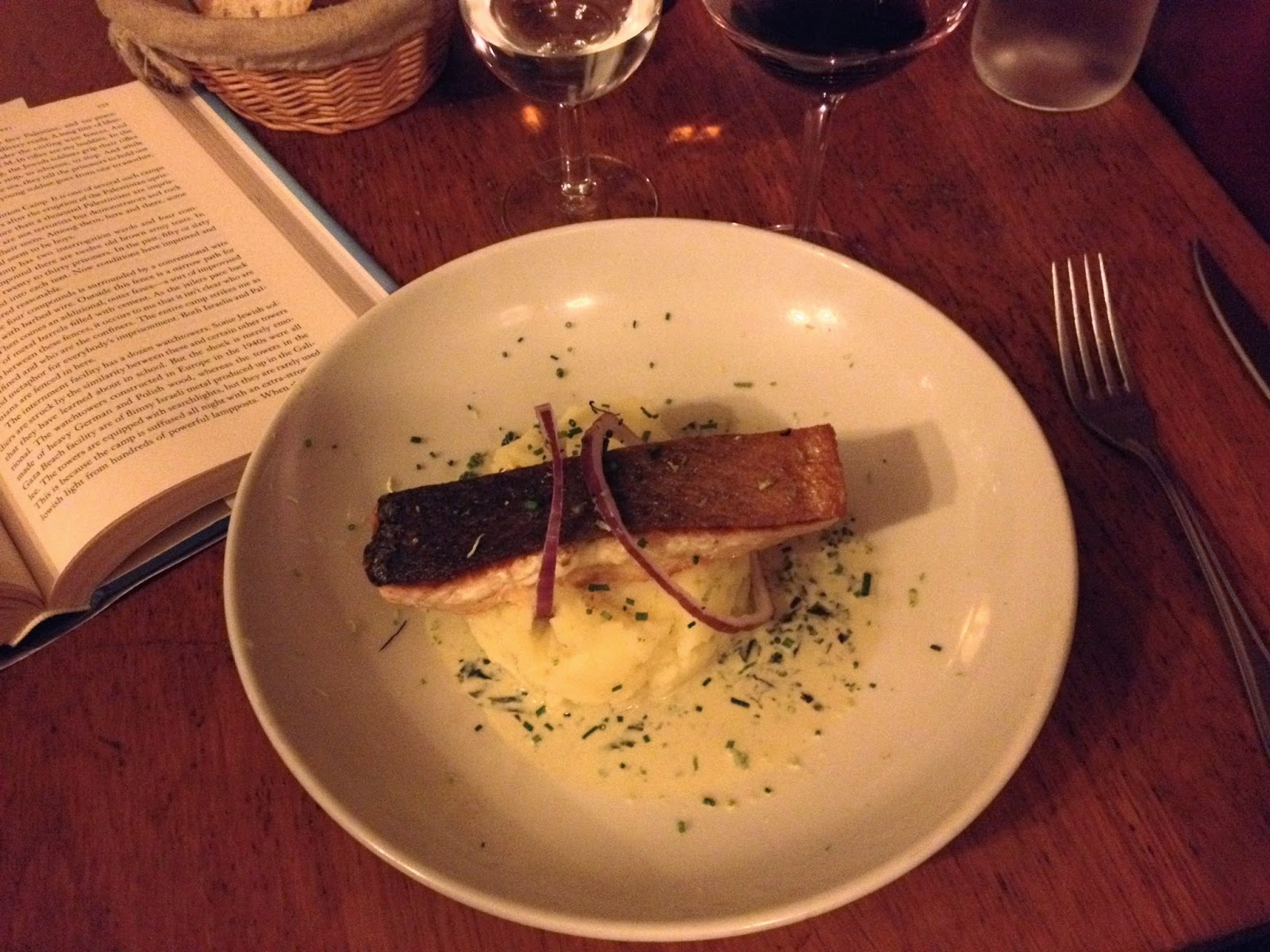 This was the third main course I've ordered here and I think it falls in the middle of the spectrum.  I found the potatoes a little to bland, but the salmon was wonderful and the crispy skin was amazing.  Usually salmon skin is something peel off and set aside on the plate.  This was fantastic.

For the final course, I did something that I've always wanted to do, but never had:  I ordered La séléction de fromages de la fromagerie "Fine Bouche" rue du Rendez-vous. 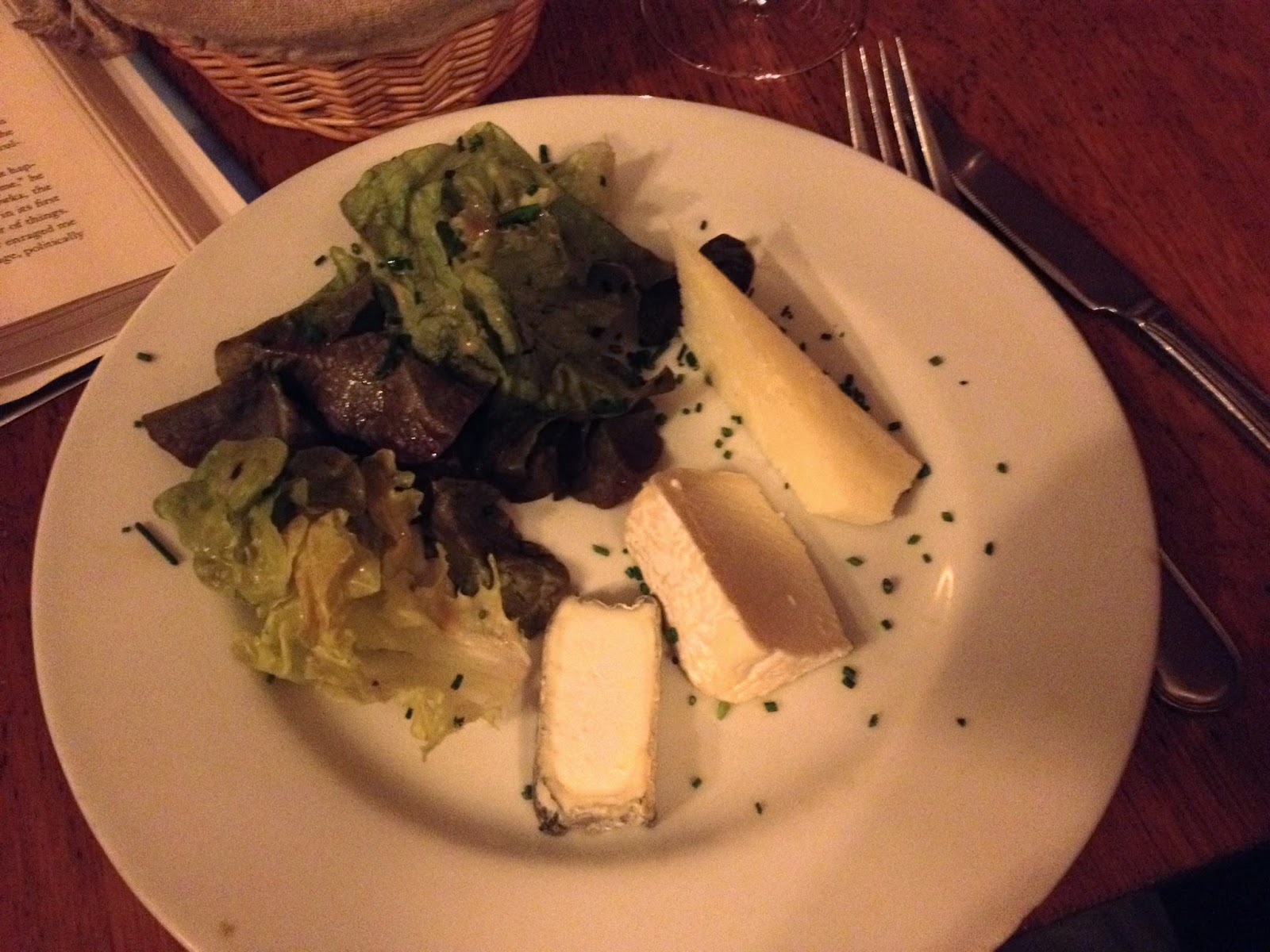 It's a mix of cheeses, both cow and goat's milk, with different consistencies and flavors.  The one in the middle is Chaource, which is a high-fat cow's milk cheese with the flavor and consistency resembling brie.  The one on the upper right is Laguiole, a hard, cow's milk cheese, with a mild taste.  The third cheese, at the bottom of the plate is Lingot de chevre fermier, which was the funkiest of all the cheeses.  It has a creamy texture like brie, but is salty and tangy with a strong, slightly unpleasant aroma.

It was a very nice way to end the trip.  Now, to finish packing.