Brrrr!  When I woke up at 6 am, the temperature was 31 but by 8 am it had fallen to 29 and kept dropping until it reached 27 (not counting wind chill).

Instead of eating breakfast at the hostel, I bundled up as warm as I could and braved the subzero (celsius) temperatures and headed down to the Lower East Side.  Following my uncle's directions, I made it to the Clinton St. Baking Company just as they opened at 8 am. 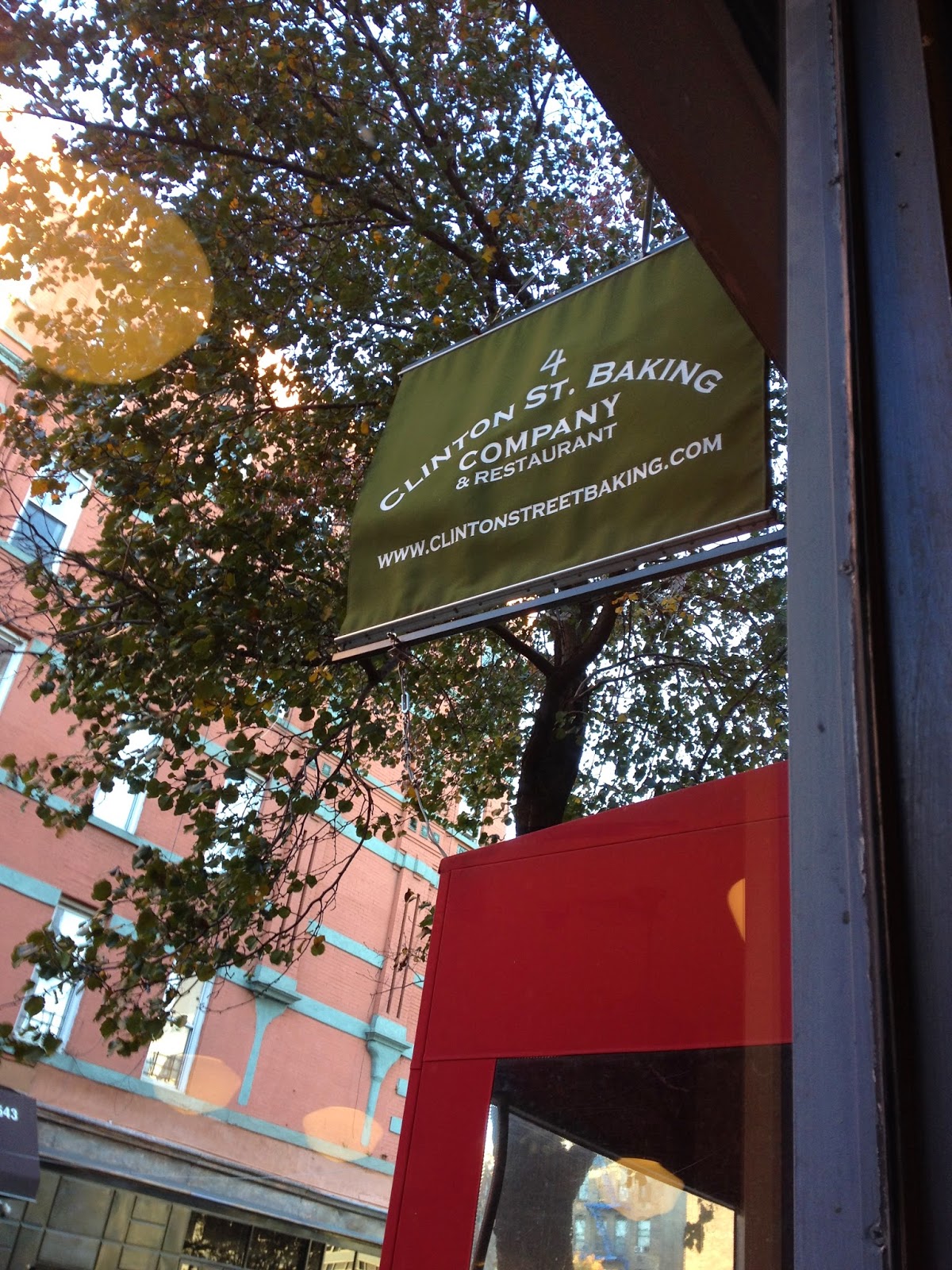 This is one of my uncle's favorite places to eat and knows the staff well. 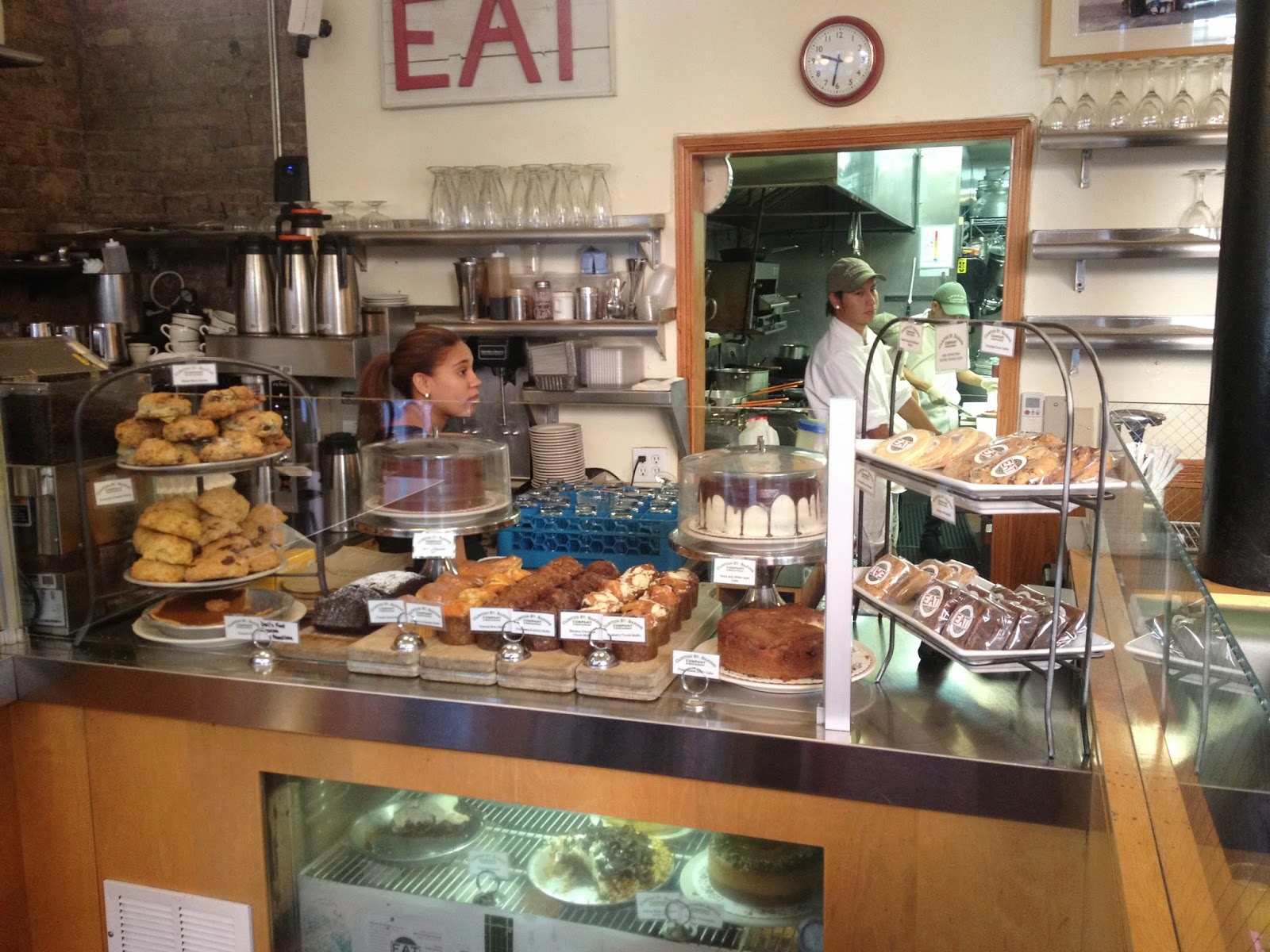 As he saves this for special occasions, he ate a bit more than usual.  I just ordered the blueberry pancakes, but he started off with an omelet and hash browns, followed by banana nut pancakes.  Like a hobbit, he has first and second breakfasts. 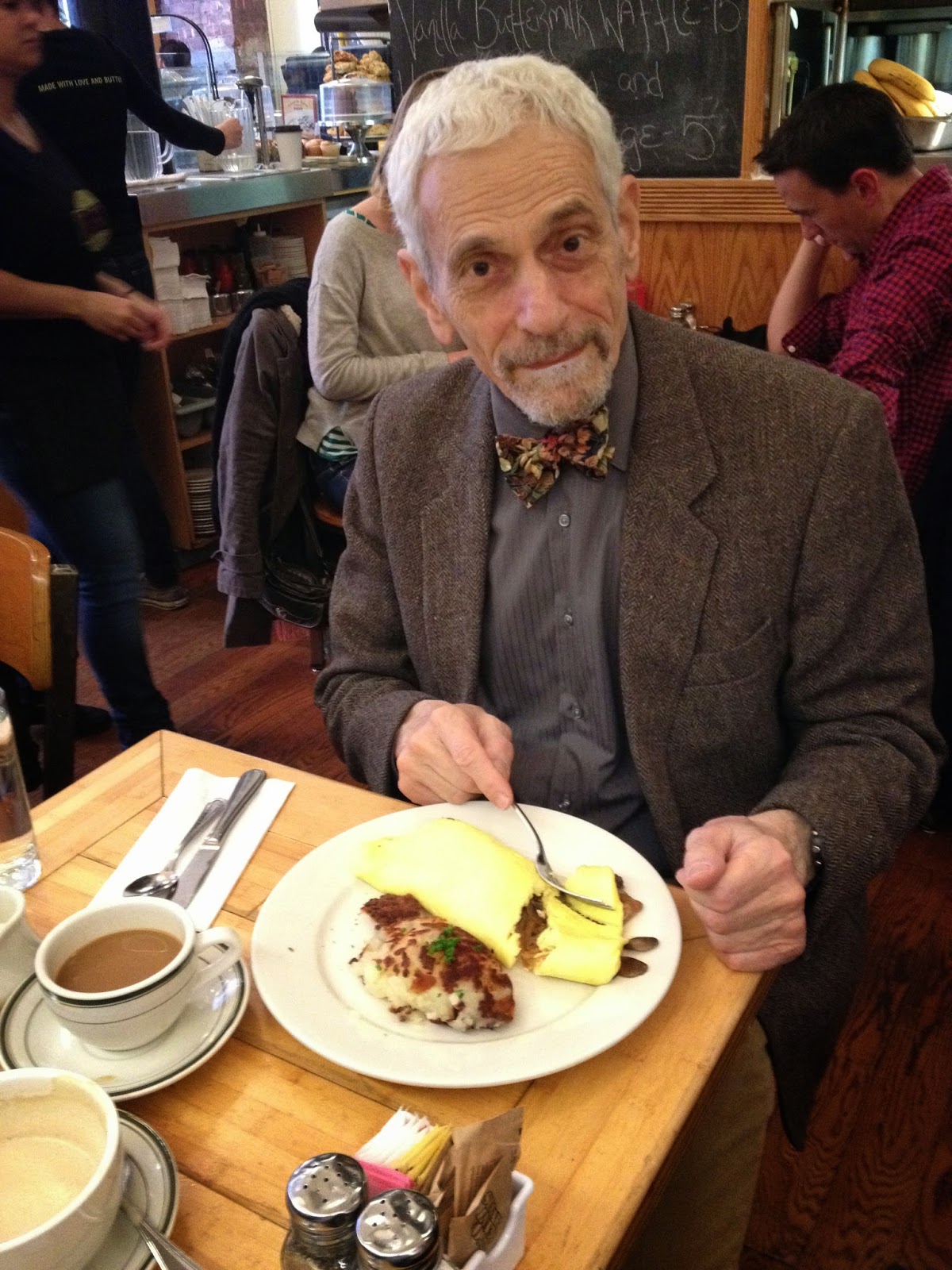 The pancakes were light, fluffy, and delicious.  They serve them with a special topping made by combining real maple syrup with good, melted butter. 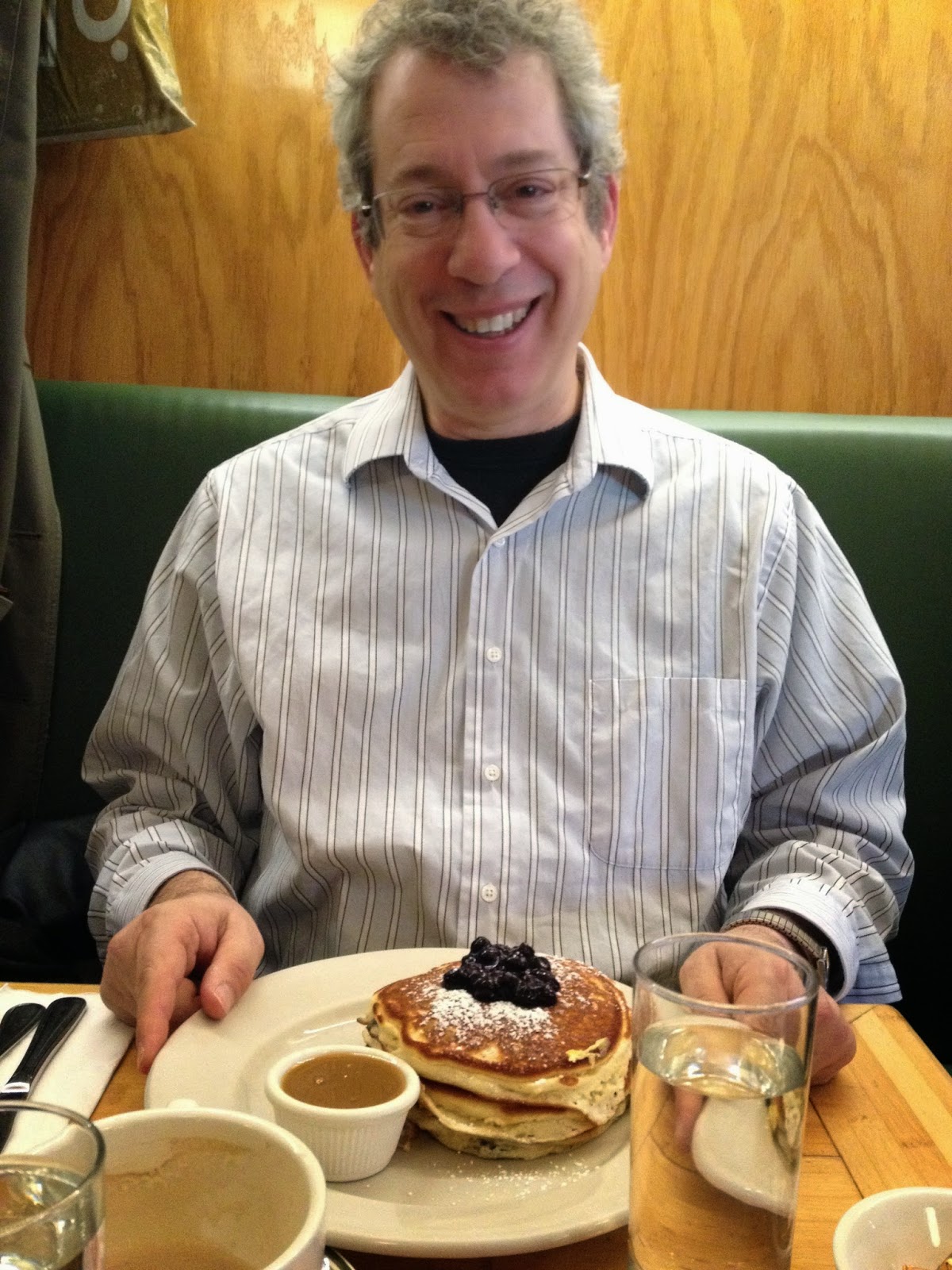 We talked for quite a while, but eventually we had to brave the cold again. There used to be some graffiti on a building nearby that said "I love LES" (where L.E.S. stood for "Lower East Side") and my uncle would pose his friends in front of it.  Unfortunately, it's now been painted over, so here I am in front of the blank store front and some garbage freezing in the cold. 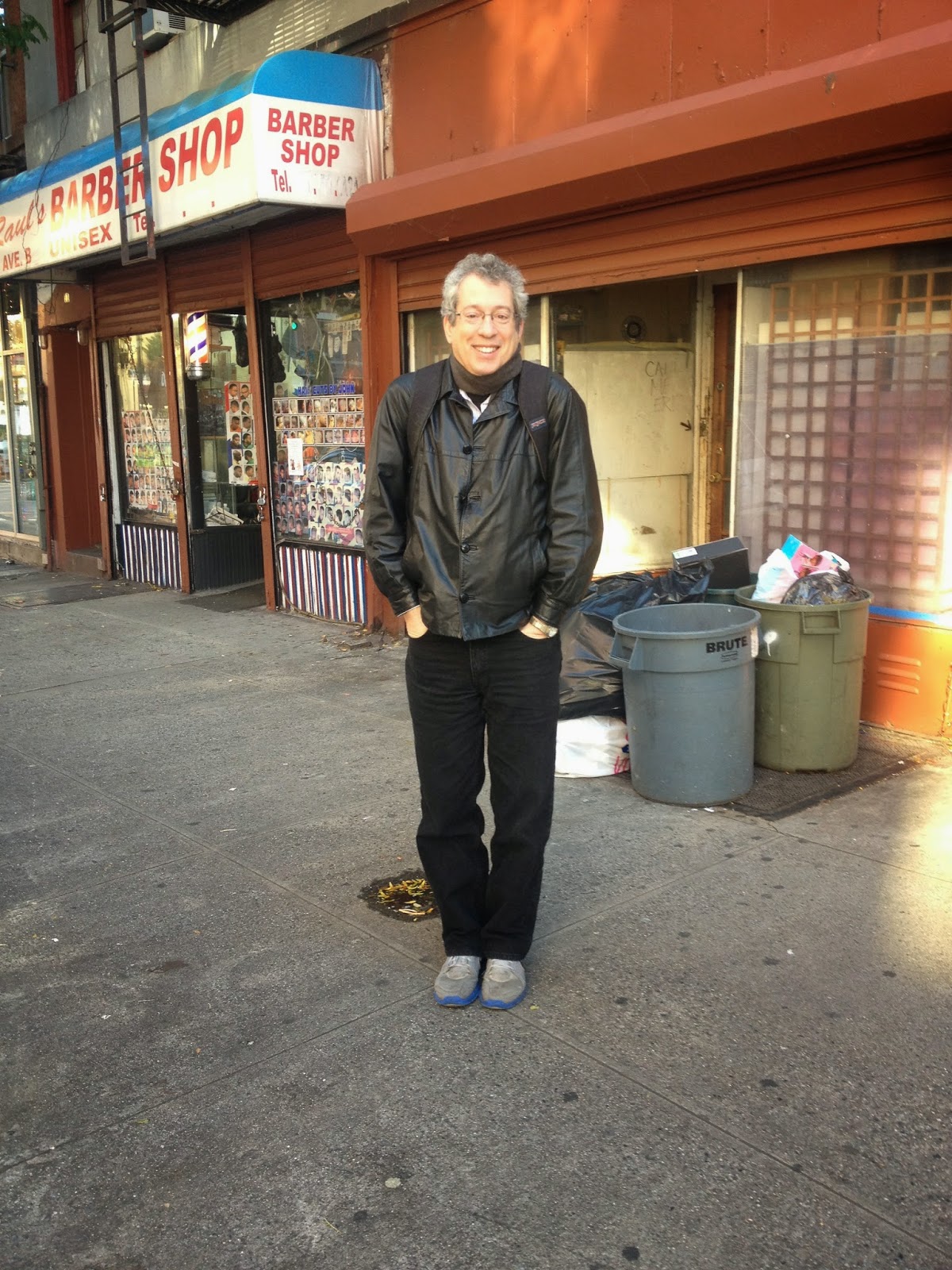 On the way to the bakery, I noticed what appeared to be a statue of Lenin on the roof of a building called "Red Square."  My uncle knew that it was a statue of Lenin but not its back story.  Apparently, the statue was actually built in the Soviet Union in the 1980s.  Someone found it in a back yard and brought to the States in 1994.  The building was put in up in 1989 by a radical sociology professor at NYU (go figure).  I wished I had paid more attention to the clock; I just thought it was a little off, but now that I see the close up photos, I can see the numbers of the hours are all scrambled. 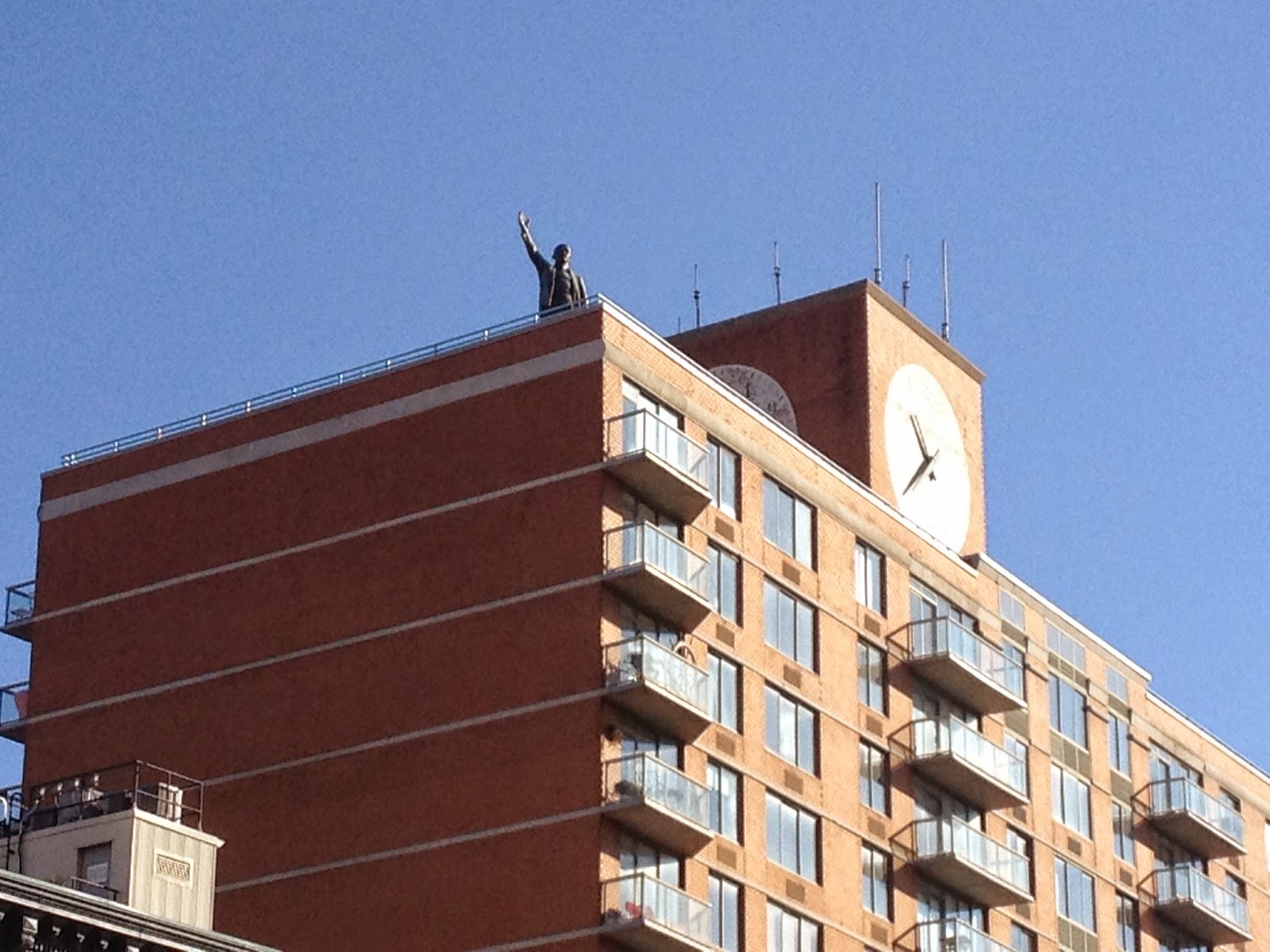 My uncle likes to get his herring at Russ & Daughters, a deli that is about to celebrate its 100th birthday and will be featured in a PBS special around Thanksgiving this year. 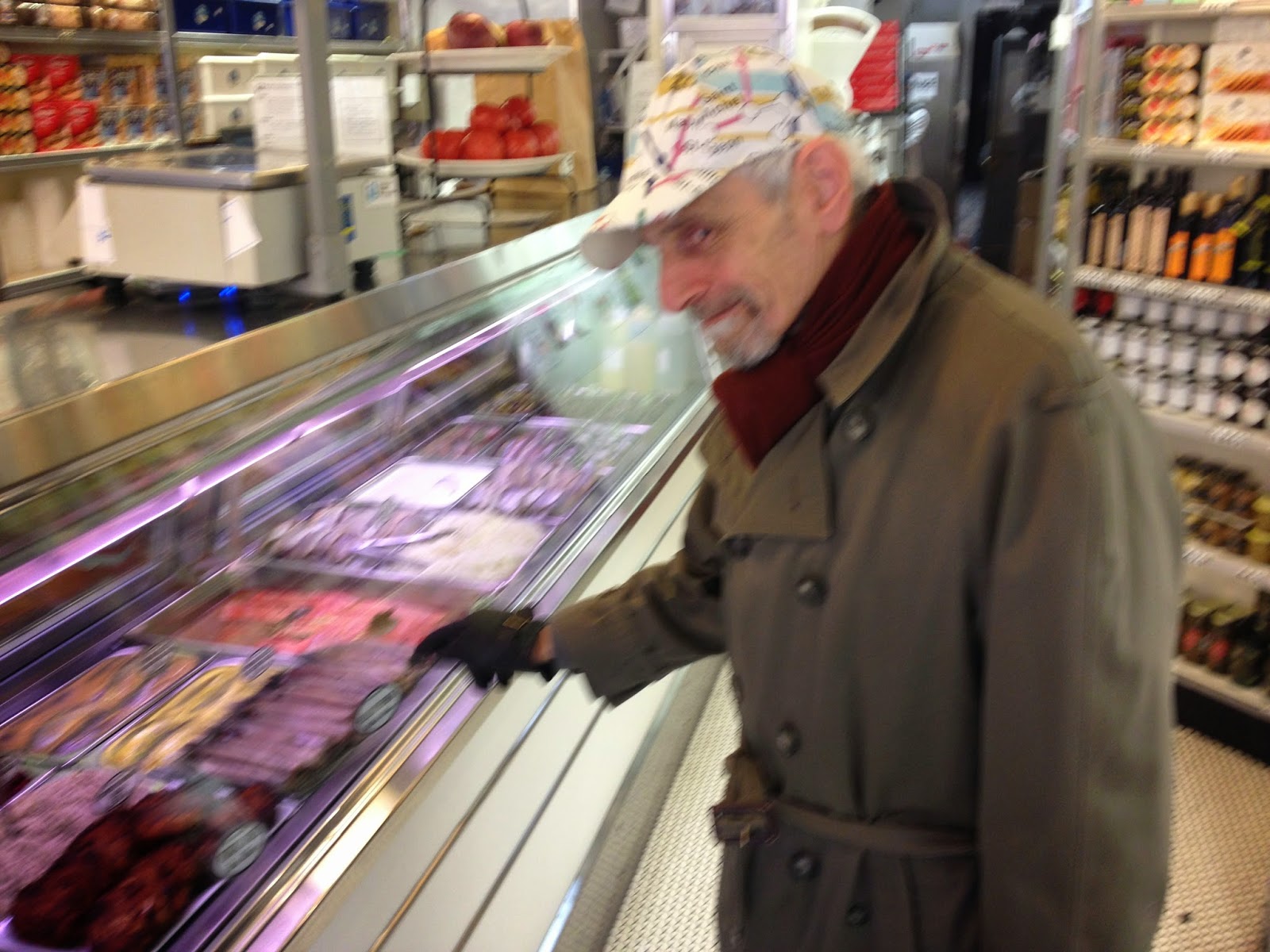 That was it for this morning's adventures.  After that it was back to the archives to spend the day going through microfilmed documents, all of which appeared blurry due to an double effect in the photos.  For lunch I went back to Breads Bakery, which like last time was filled with Israelis and lots of Hebrew.  I figured with that many Israelis, the Israeli salad would probably be good, so I got it and a cheese, tomato, and pesto sandwich. 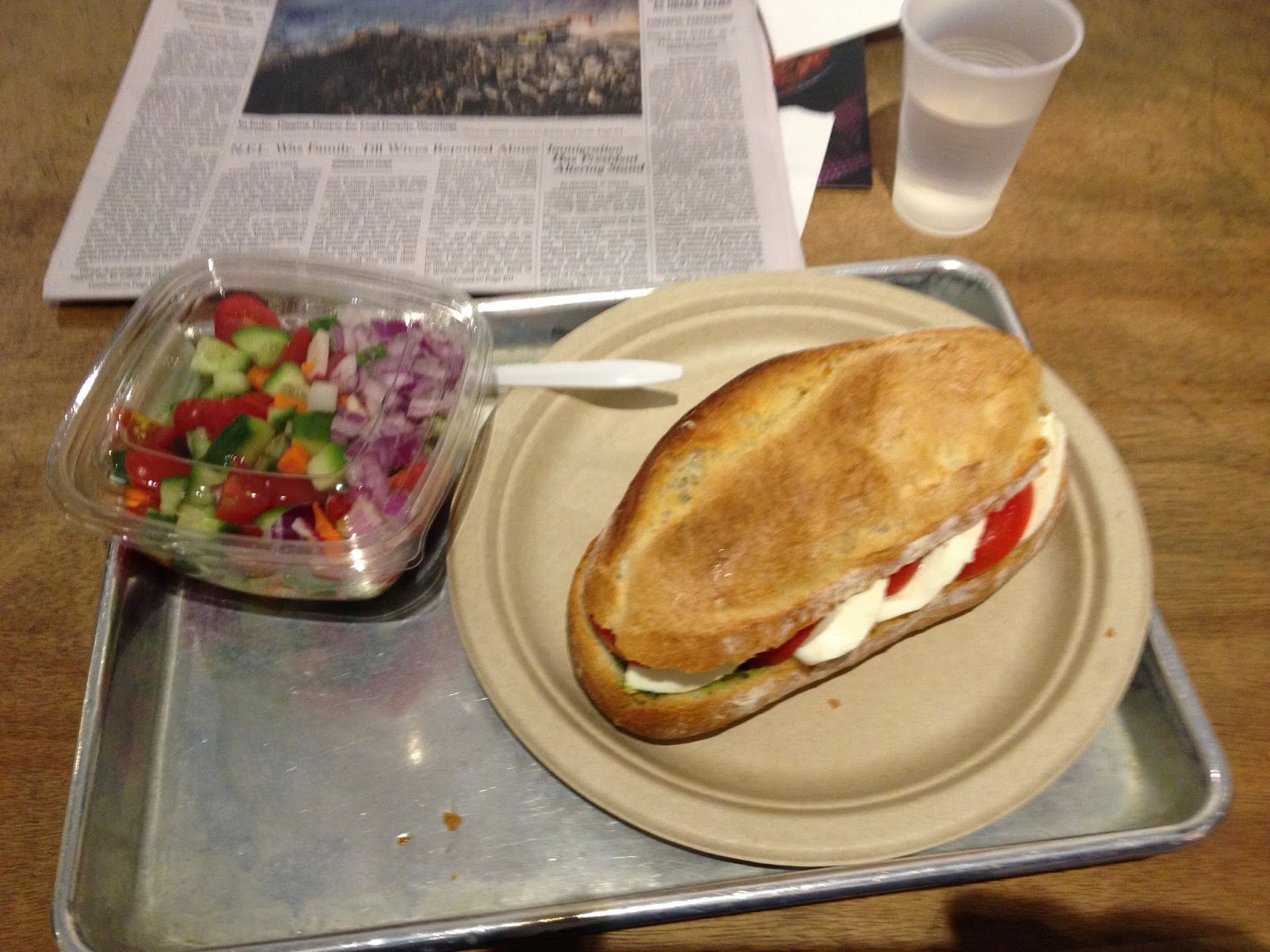 There's only so much microfilm that one can go through at any given time.  On when break I went through a new photo exhibit on the summer camps in the Catskills. 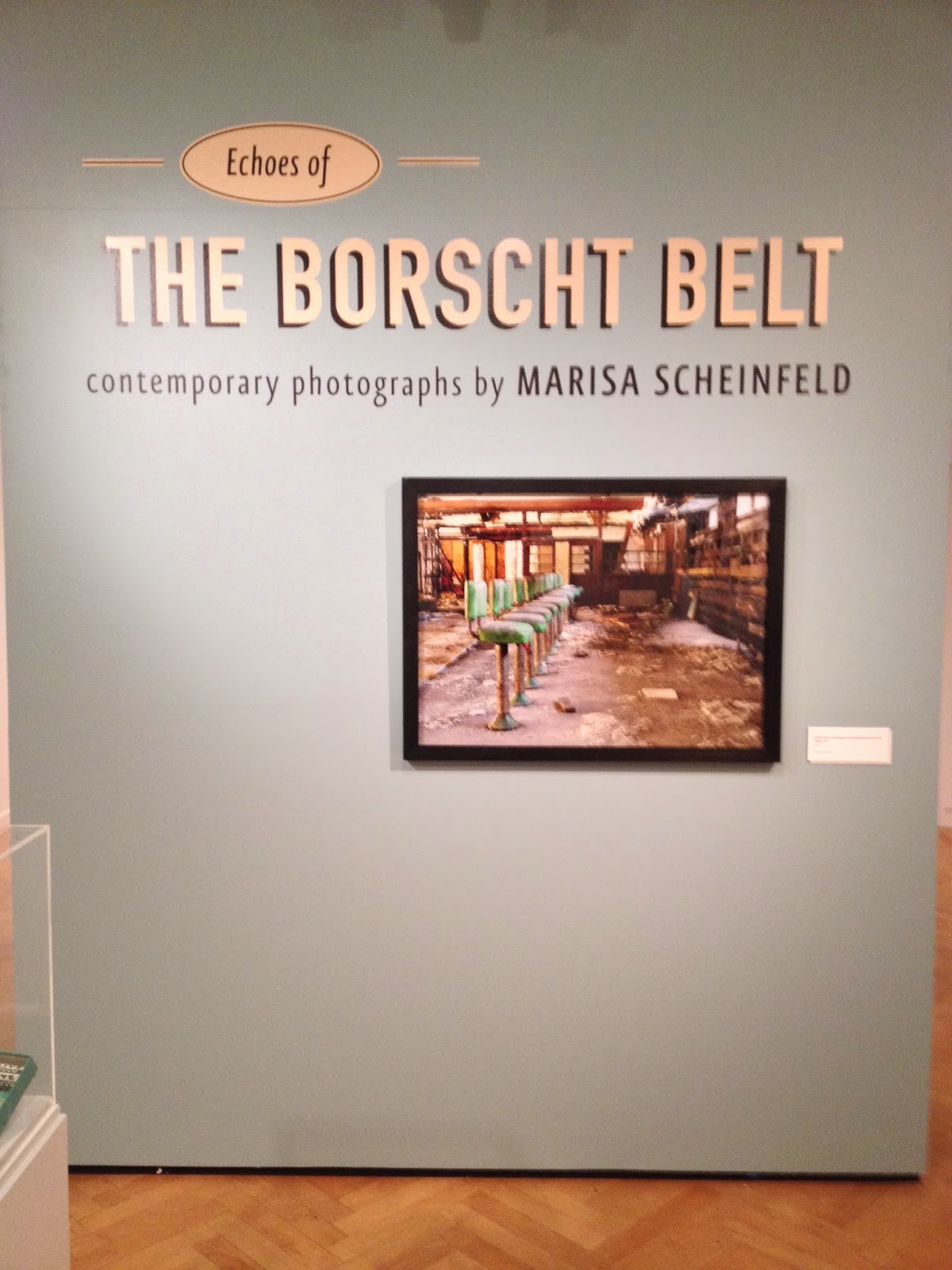 What the photographer has done was gain entry to several abandoned resorts and wander through them (carefully) taking photographs.  It becomes a kind of lost or vanished world in decay.  The images are sad yet beautiful.

This is the overpass as the Pines Hotel: 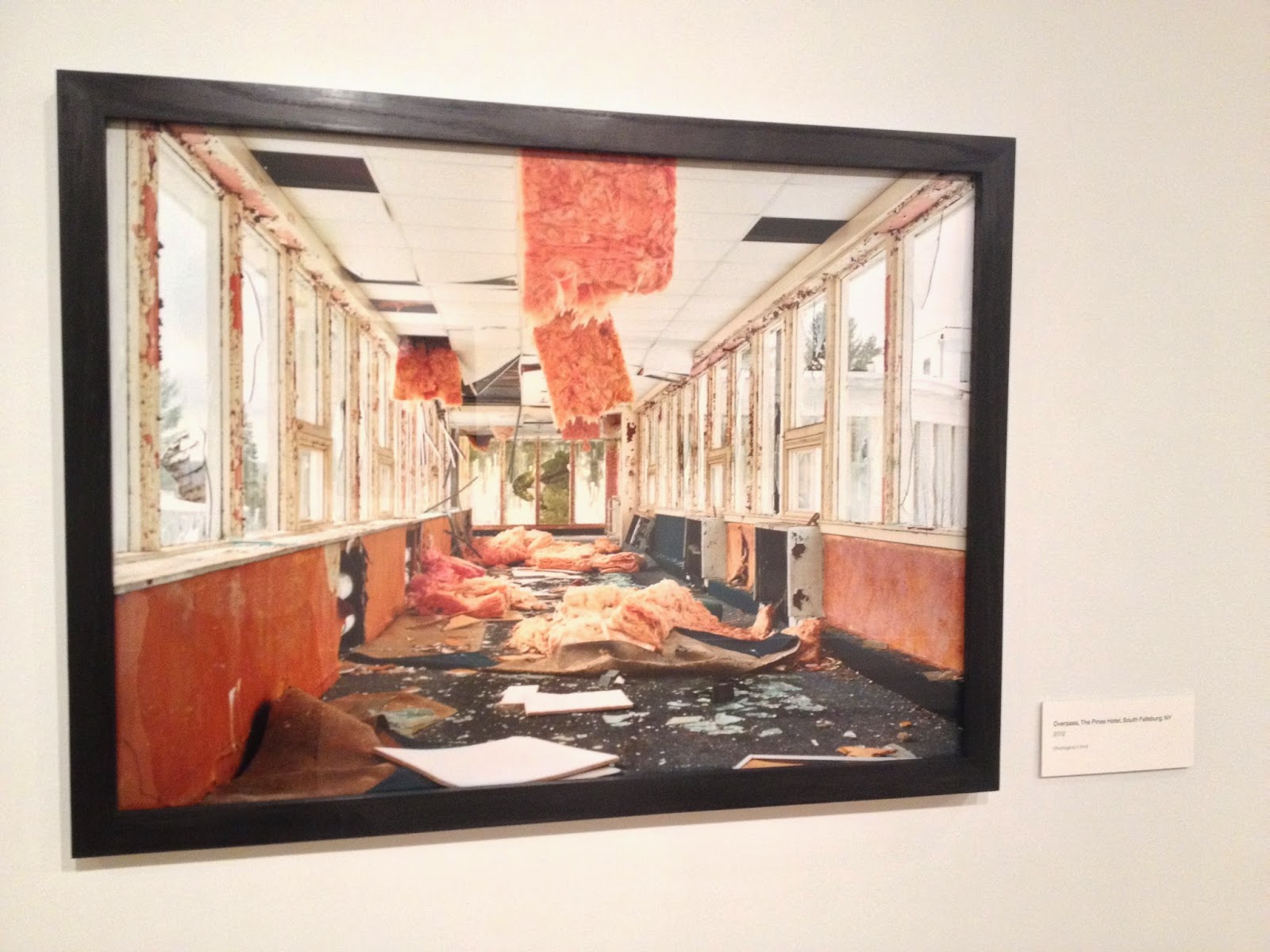 The indoor swimming pool at Grossinger's: 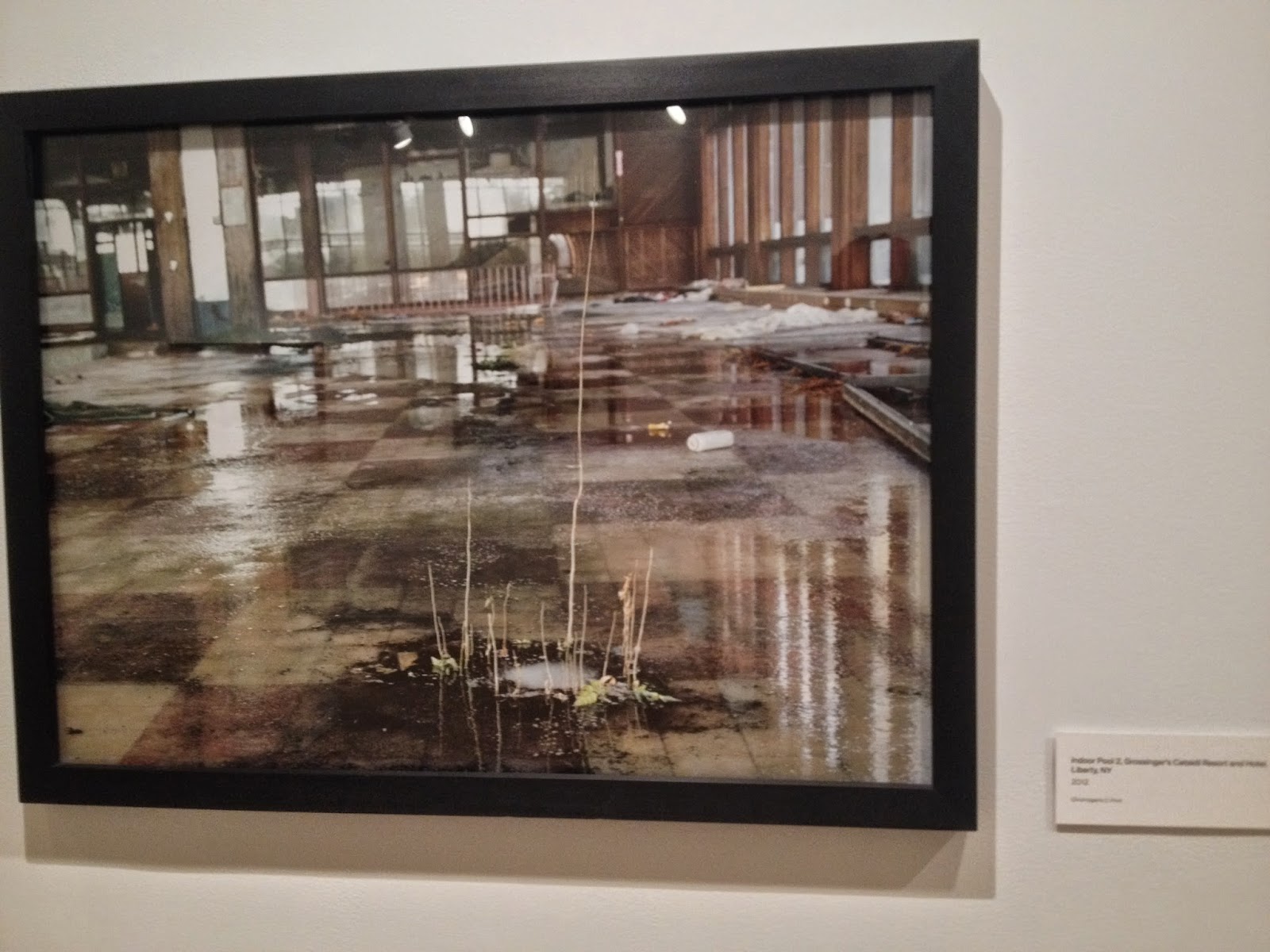 The coffee shop at Grossinger's: 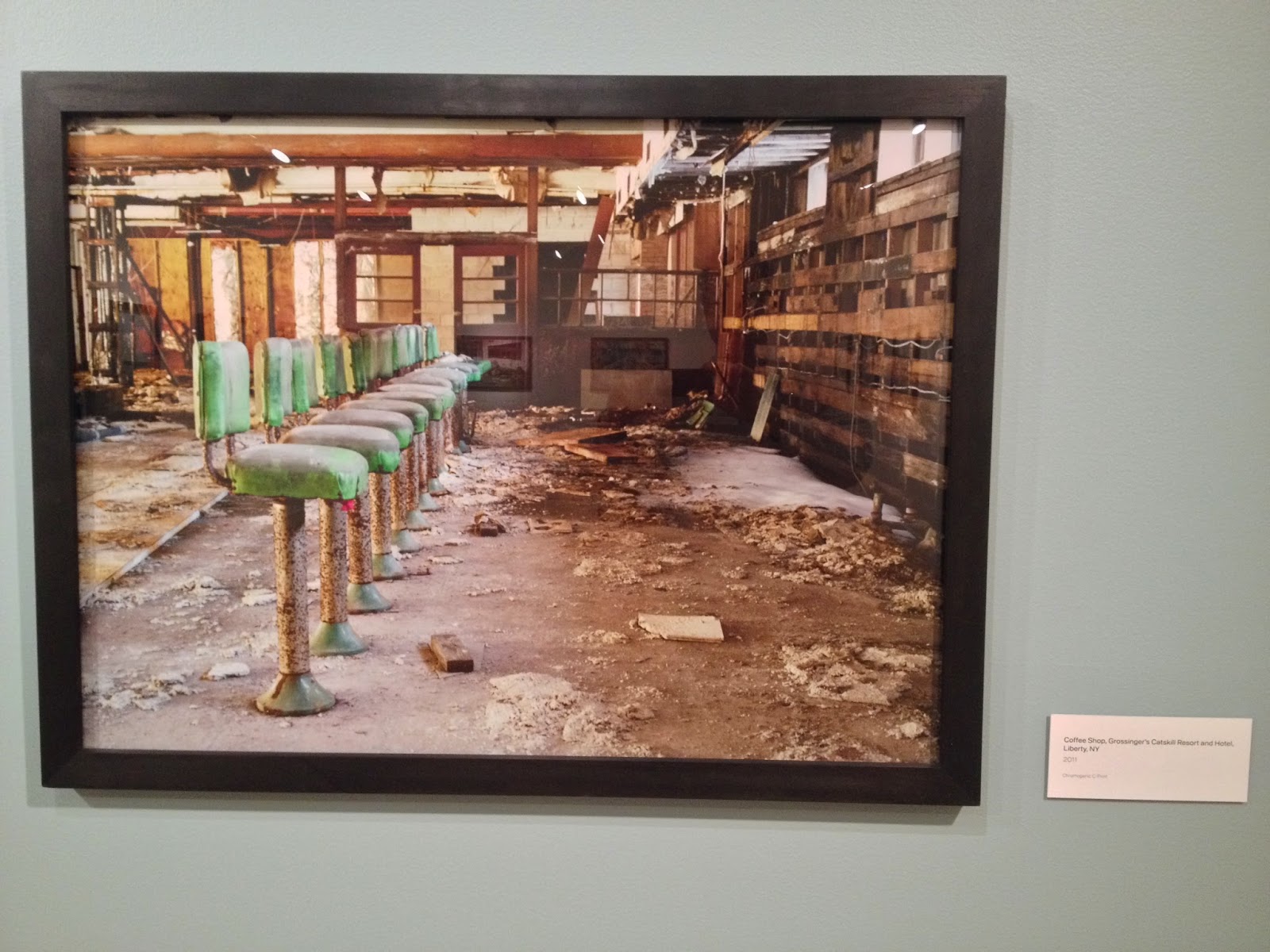 In the 1920s, '30s, and '40s, this is where working class and middle class Jews from the cities would go to in the summer to escape the heat and humidity.  The fathers would stay behind working and come up on the weekends.

Didn't find a lot of good material on the microfilm, except for a letter to the defendant letting him know he had gotten the lawyer he wanted.  More luck in the French autobiography of that same lawyer, which gave me leads on some other cases I need to look at.

For dinner tonight, I got together with a friend of mine from grad school who recently relocated to New York after working in Kabul, Afghanistan for two years. 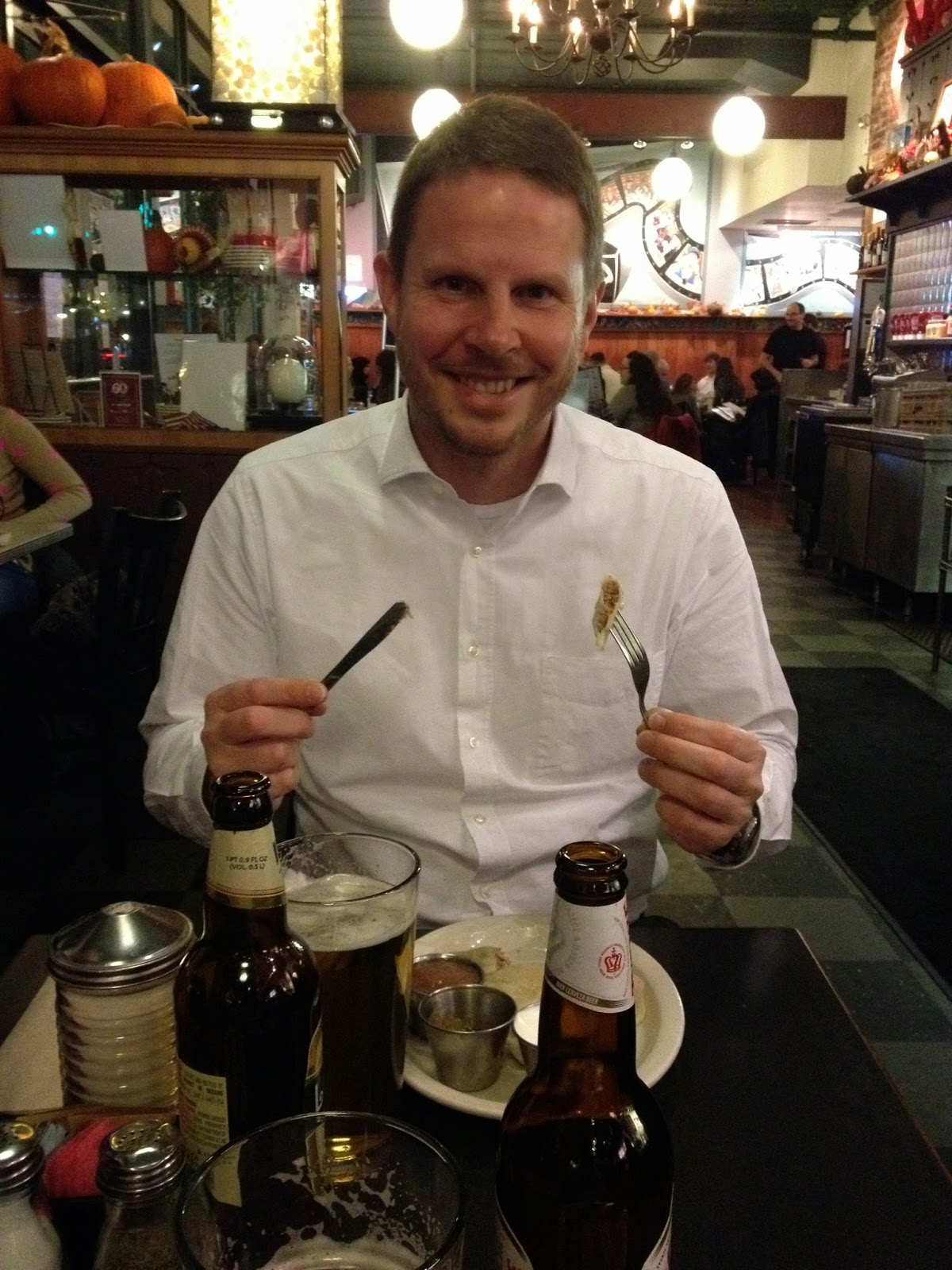 We went to Vaselka in the East Village, a restaurant that specializes in Ukrainian food.  I was sort of hoping for a replacement for the Kiev, which I loved, but no blintzes on the menu.  Luckily, the pierogie were very good.

Coming out of the restaurant, though, the cold air was a physical shock.  It's now 26 F, but with the windchill, it feels like 20.  That's pretty cold.  It'll stay pretty cold tomorrow and then slowly begin to warm up.   I'll be at the Metropolitan Museum of Art tomorrow, and I have tickets for the Tenement Museum on Friday.