I was trying to remember when was the last time I visited the Metropolitan Museum of Art, but I'm pretty sure it was more than 25 years ago.  Which is a shame, since not only is it a world class museum, but one of my favorite books growing up was set there:  From the Mixed Up Files of Mrs. Basil E. Frankweiler by E. L. Konigsberg (1967) describes two children who run away from home and live in the Met in secret.  In between fishing coins out of the fountain for food and sleeping in Louis XIV, they solve a mystery involving a potential Michaelangelo statue.

No such adventures for me today.  Instead, my uncle gave me a personal tour of his favorite things in the museum.

We started with the American wing and the Frank Lloyd Wright room: 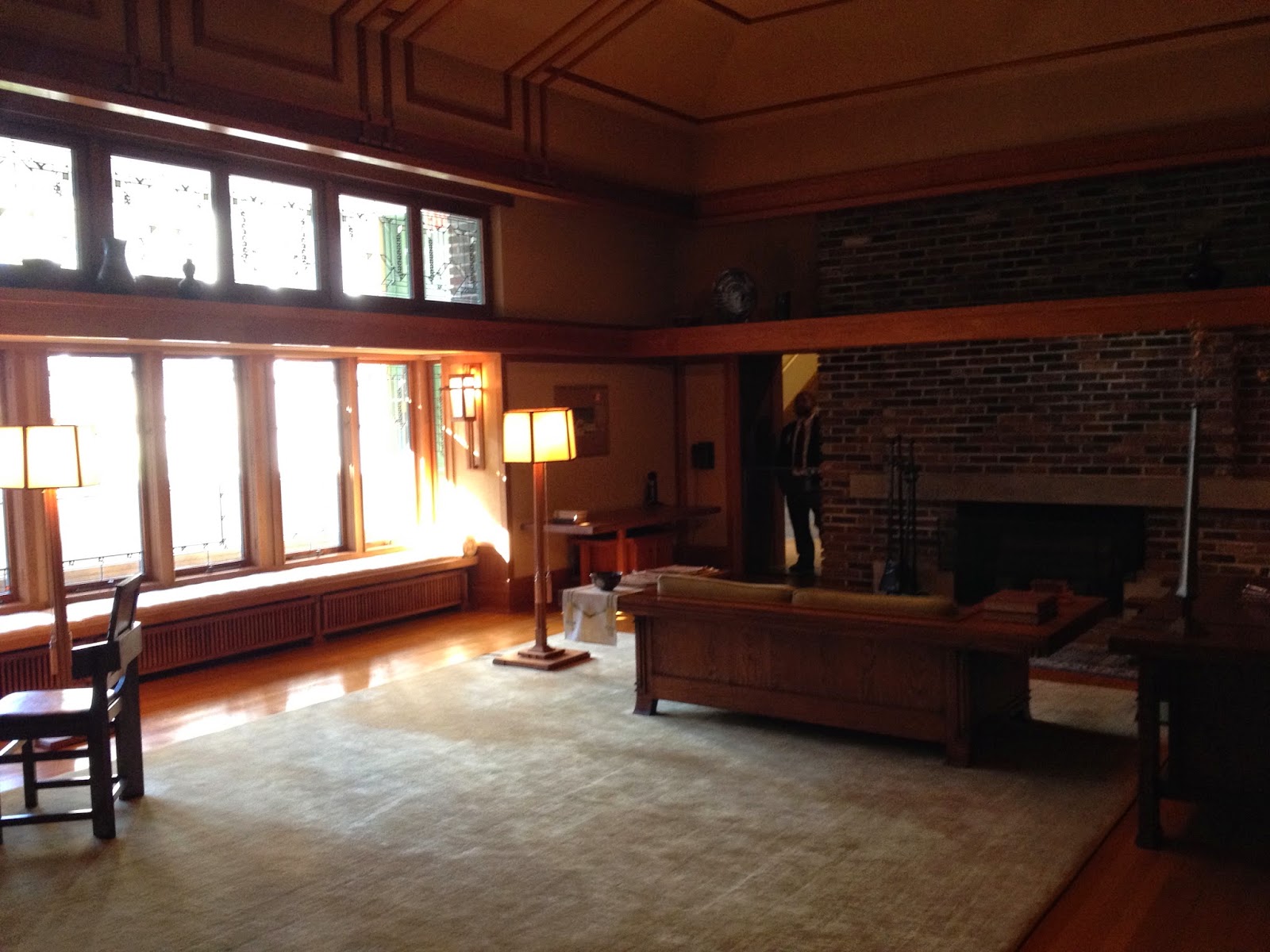 But the really amazing piece was the Thomas Hart Benton mural America Today, created in 1930-31, in the early days of the Great Depression.  The piece is incredibly vibrant and moving. 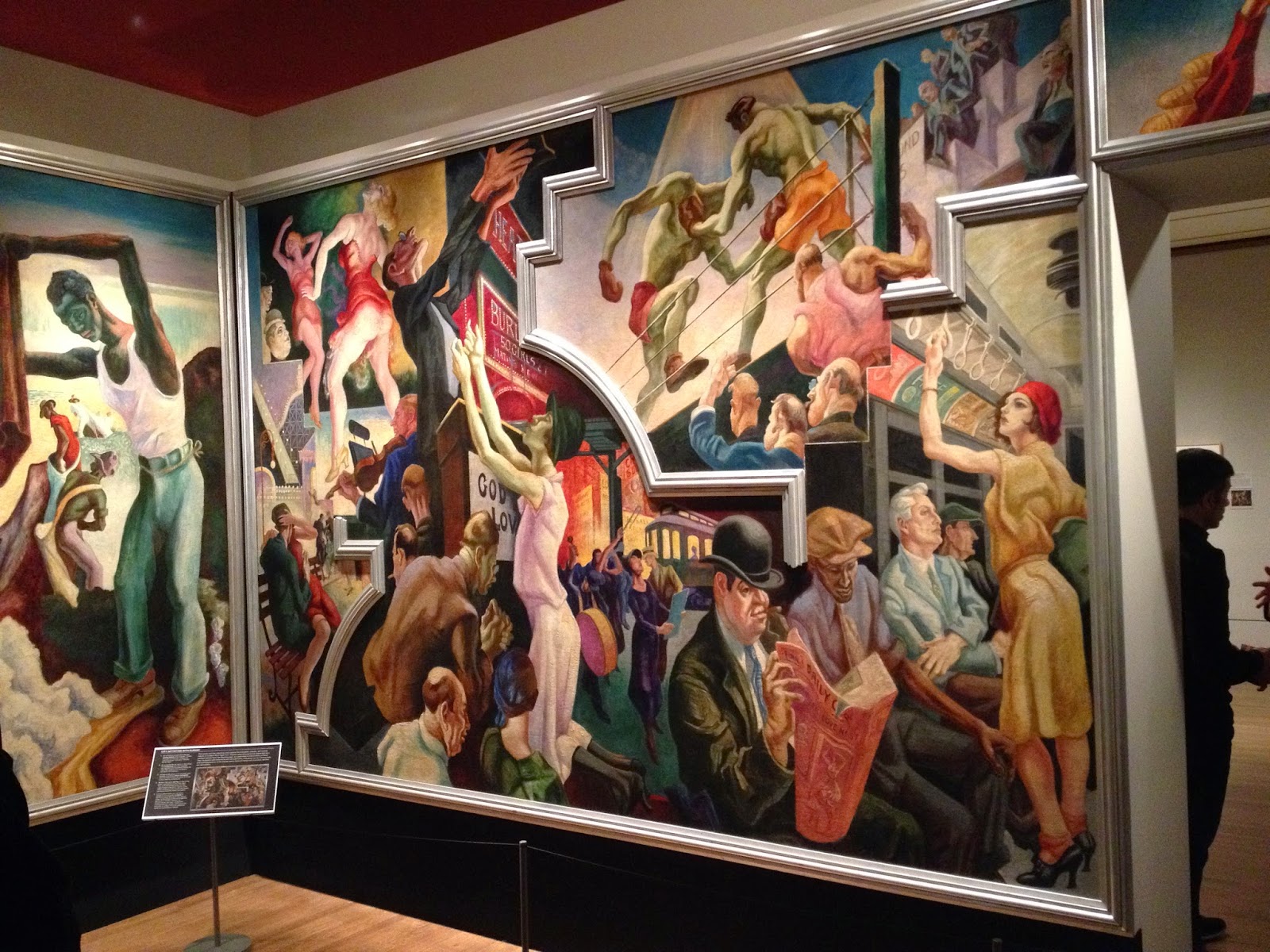 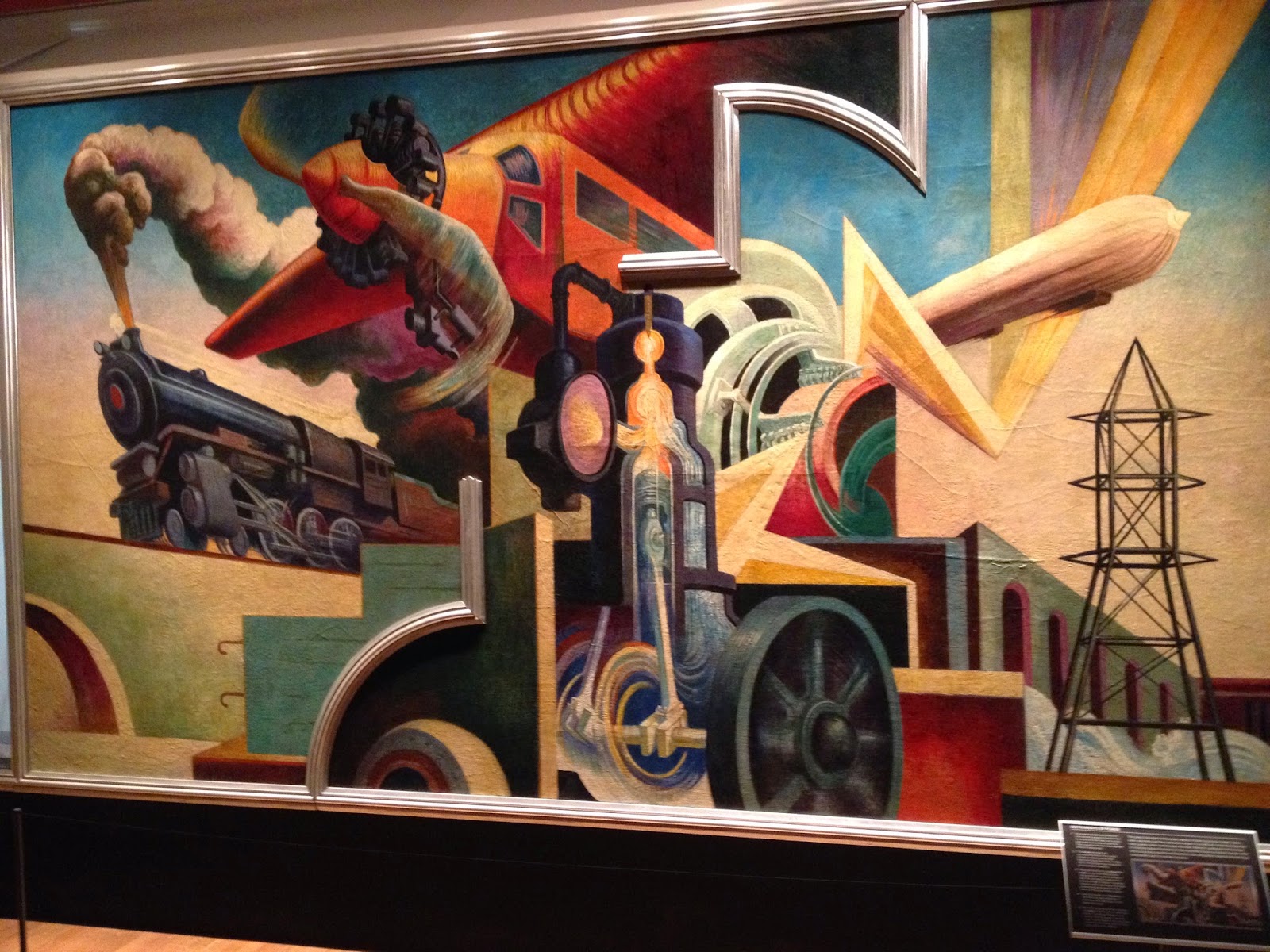 Many of the panels, with their stylized forms and celebration of American dynamism and physicality, reminded me many of the government buildings put up in Washington D.C. at this time, which had similar sculptures in front of them. 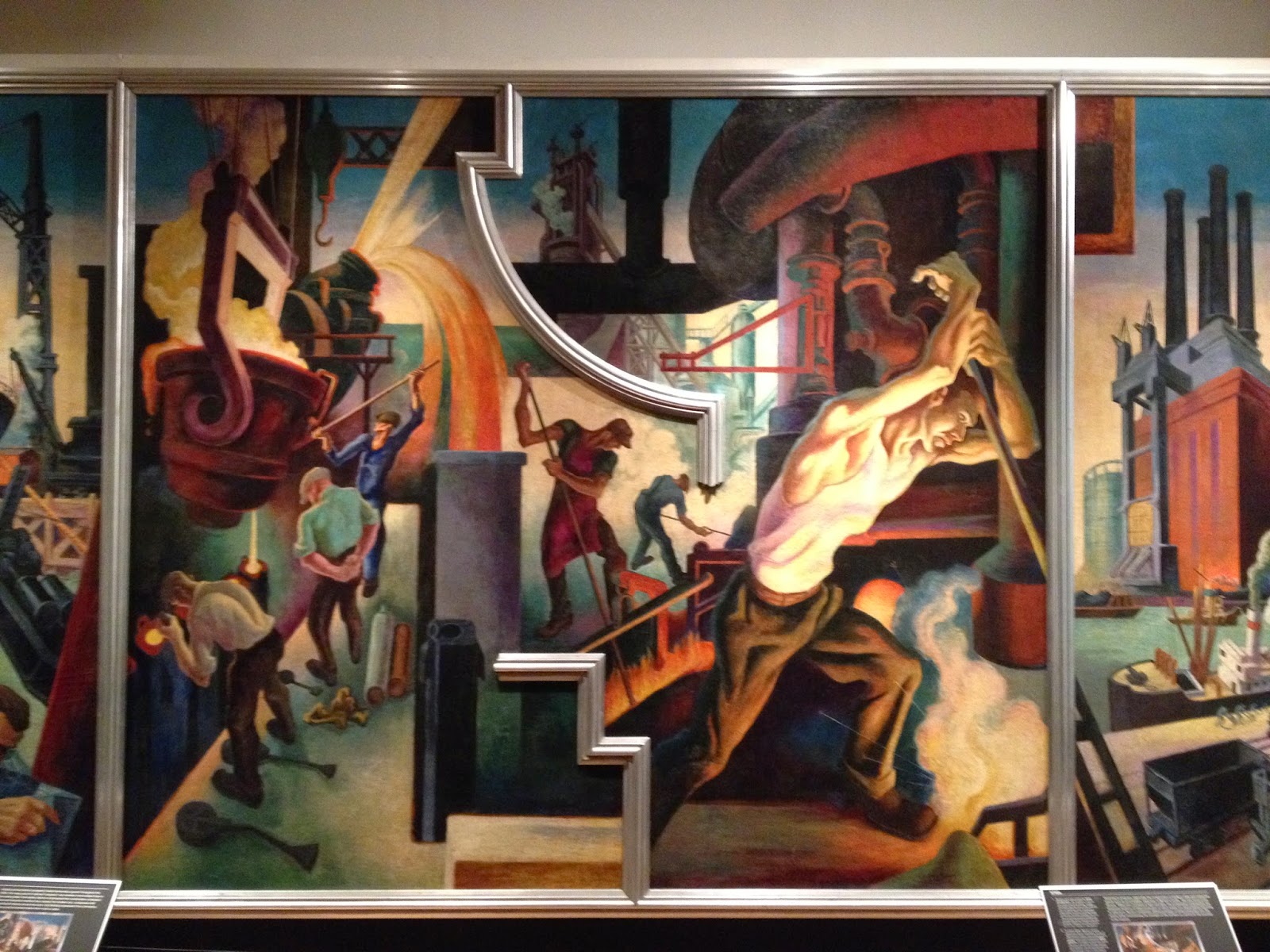 Another painter that came strongly to mind was Paul Cadmus, who also painted panoramas of contemporary life that often satirized human foibles. 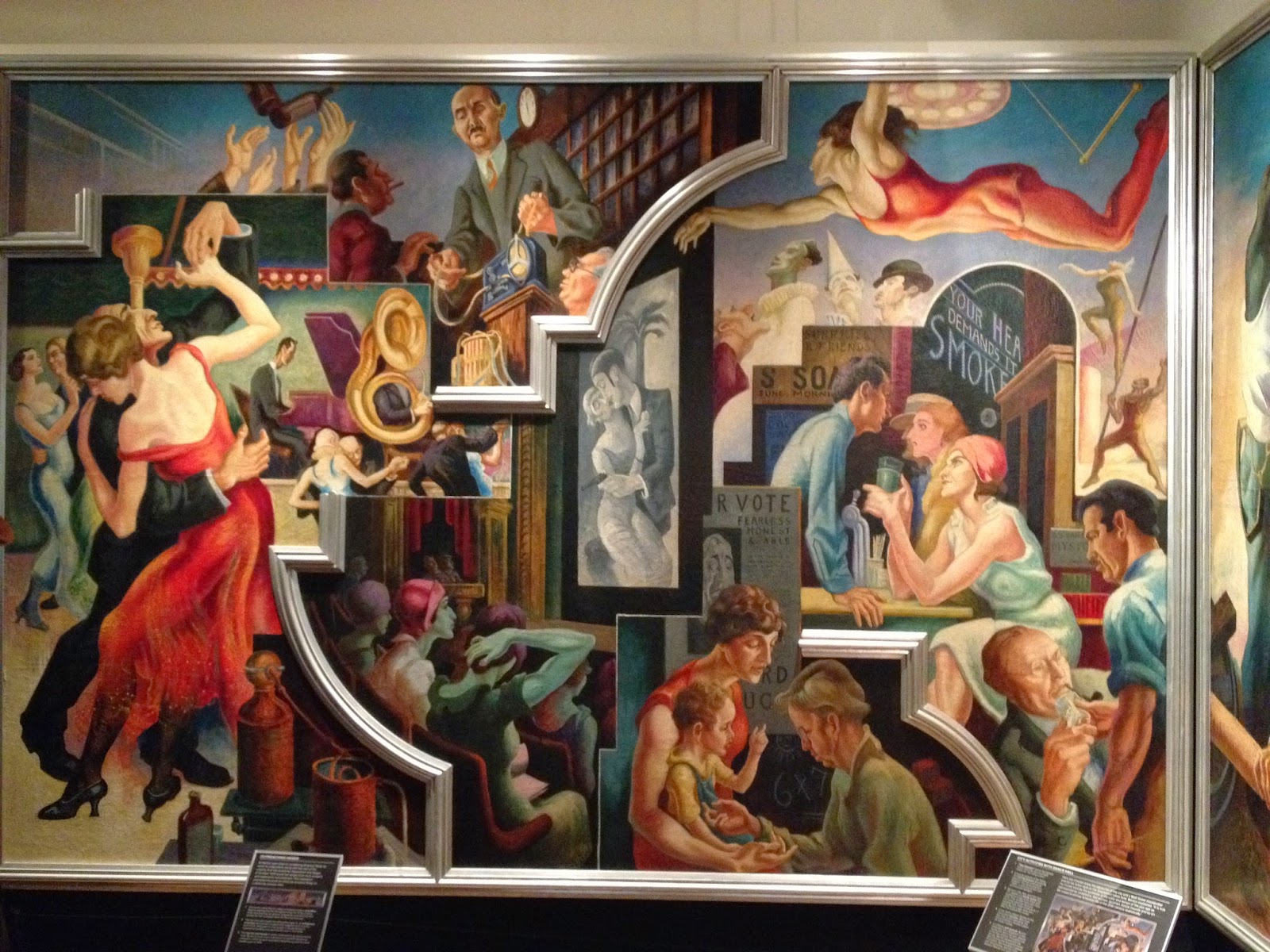 One of my uncle's most favorite paintings was John Singer Sargent's Madame X (he required the euphemism, since it was the portrait of a mistress): 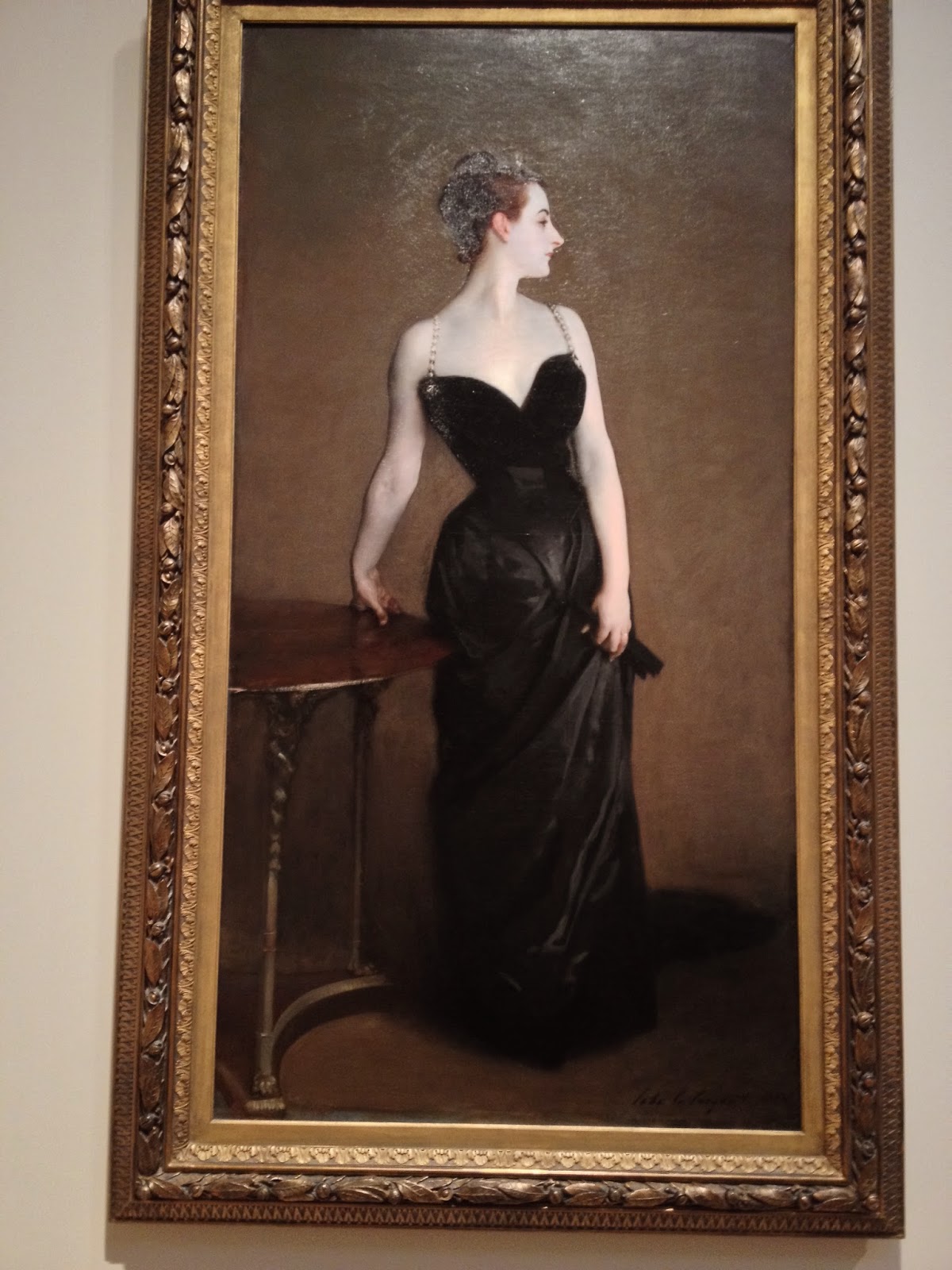 On our way to the Japanese exhibit, I noticed one particular painting out of the corner of my eye:  Thomas Cole's The Ox-Bow.  I love this painting so much, I use it as the wallpaper on my work computer.  The version I found on line, however, lacks much of the detail that you can see by observing the painting close up (including the artist's inclusion of himself in the wilderness at the bottom of the painting). 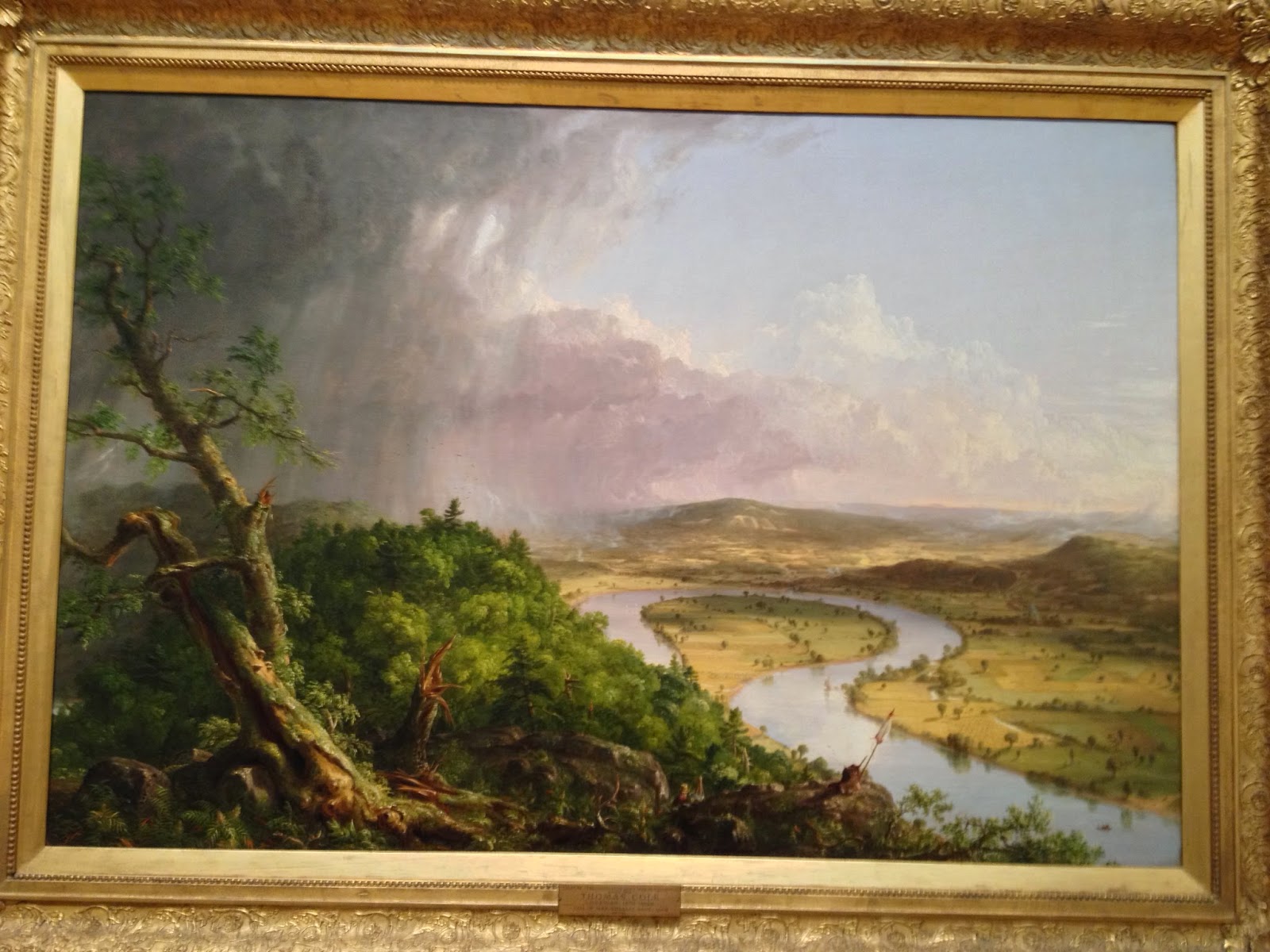 We passed through the El Greco exhibition, but that artist's work has never appealed to me.  In general, I don't care for Baroque art.  It's mostly the subject matter:  all those priests and saints, their bodies twisted in ecstatic agony.

Instead, we went to the Madame Cezanne exhibit, focusing on Cezanne's multiple portraits of his wife.  What stood out to me is that in all of them, her expression ranges from dour, to passive, to miserable.  Like this one, which is typical. 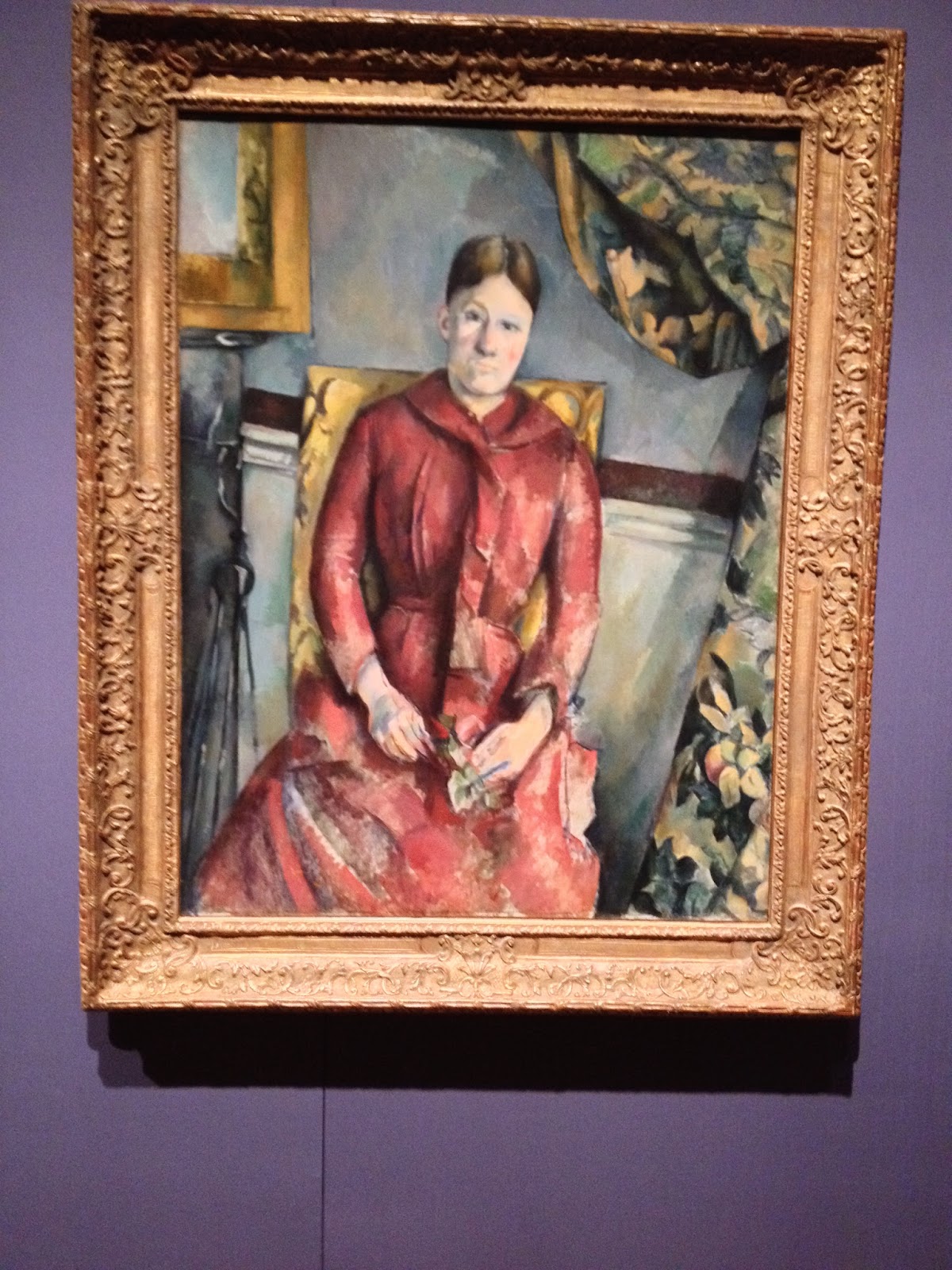 To get to the exhibit on Cubism, we cut through the art of the Americas.  This guy is from Ecuador: 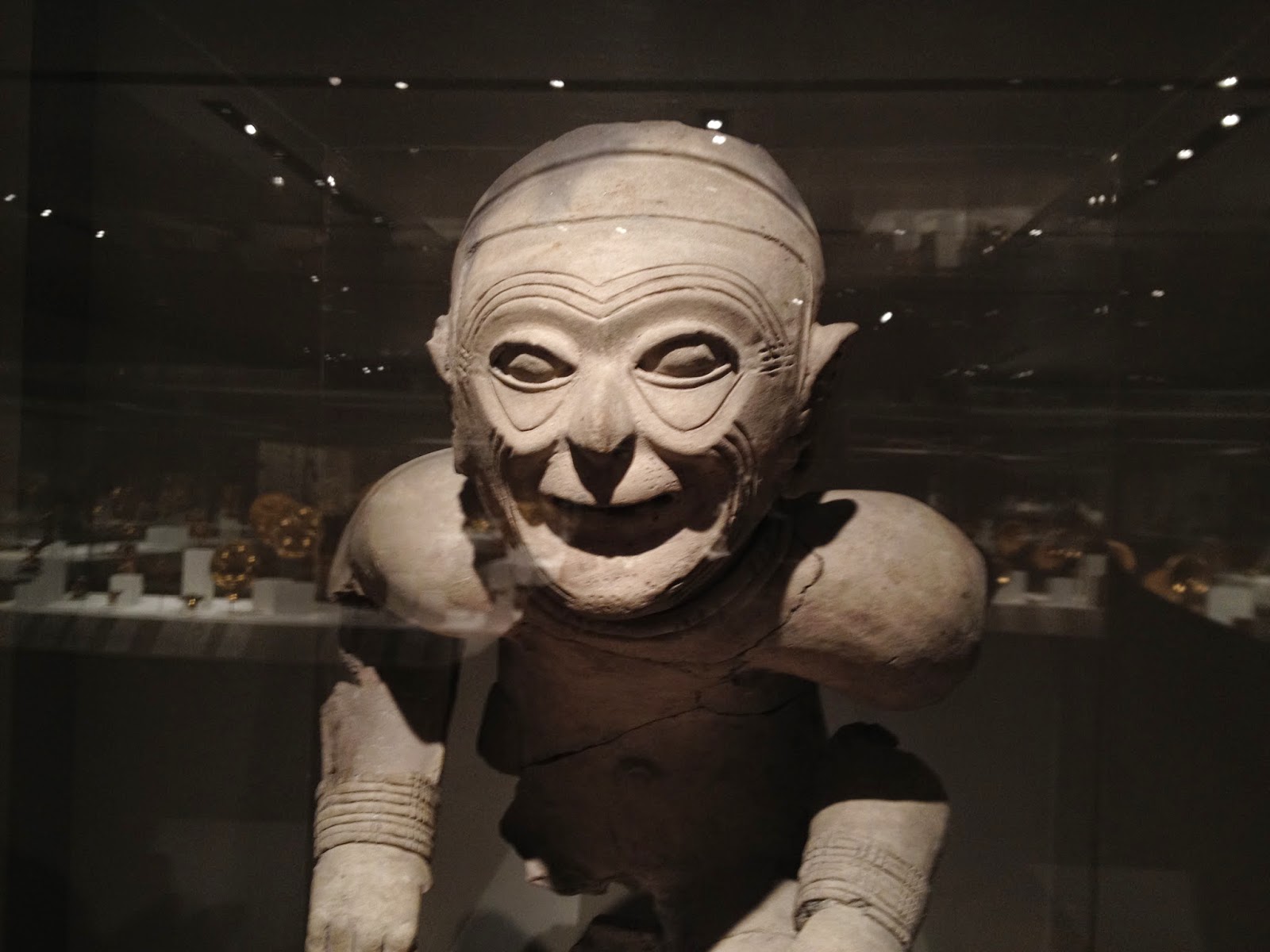 While this gold pre-Columbian figurine is from Costa Rica: 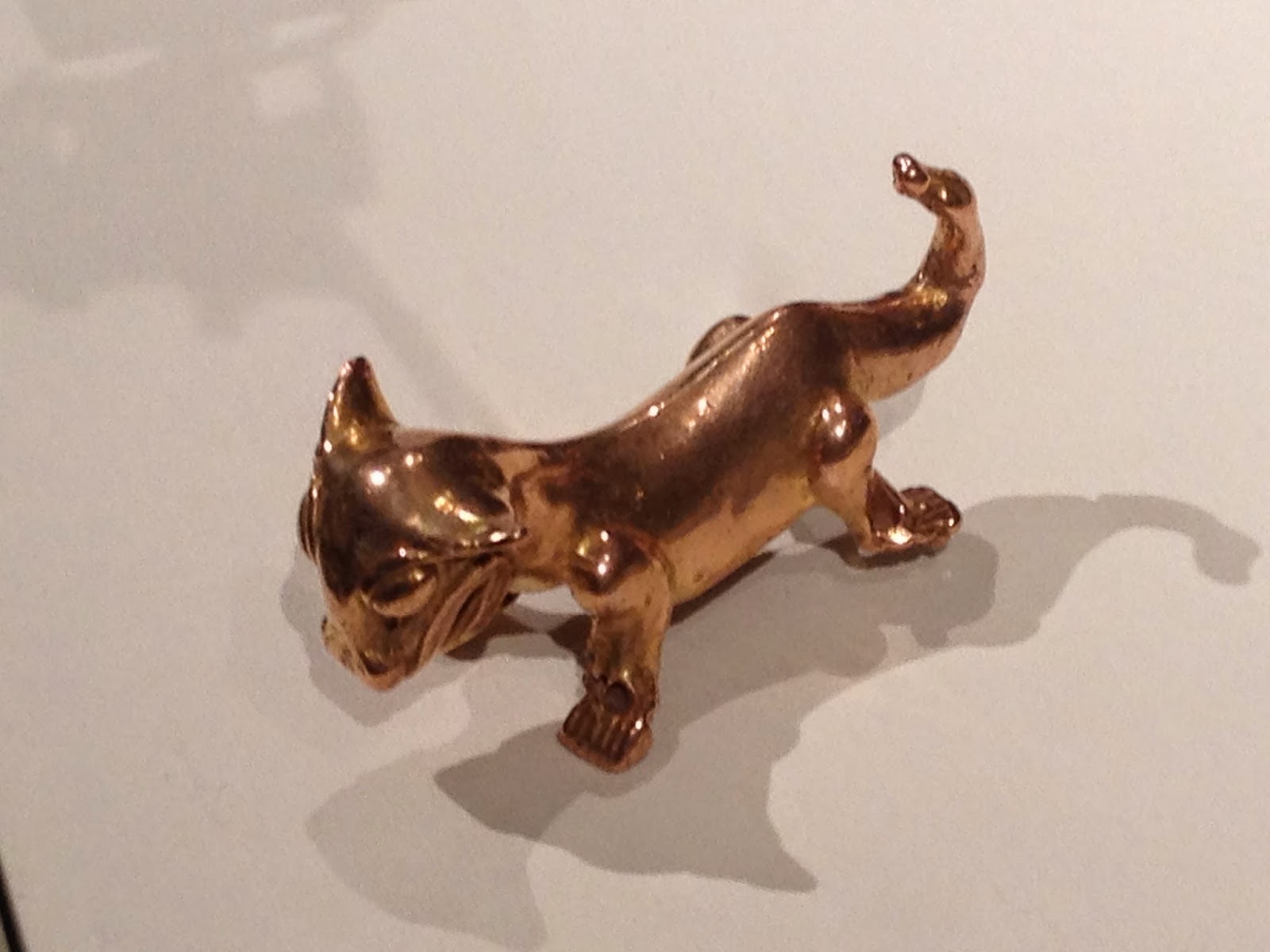 The Cubist exhibit is one of those where photographs were not permitted.  The primary focus was on Braque and Picasso.  I actually much prefer the former to the latter, though at certain points, the worked so closely together as to be almost indistinguishable.  They did permit photos in the general modernism section, so I like these bulls a lot. 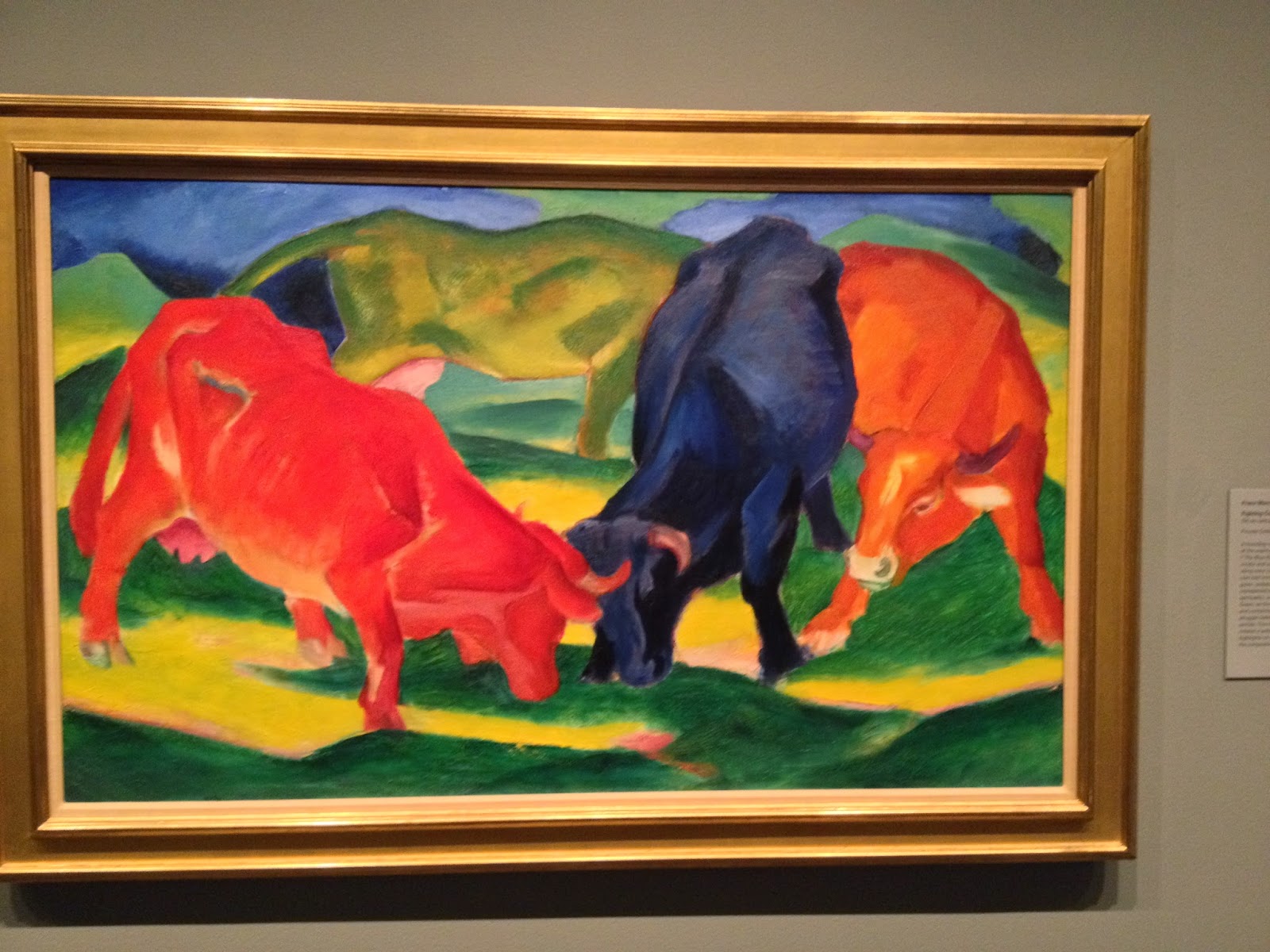 I also was surprised to see that they had a Paul Cadmus painting, whose work I found so similar in certain ways to Thomas Hart Benton.  Here's his painting called "Gilding the Acrobats": 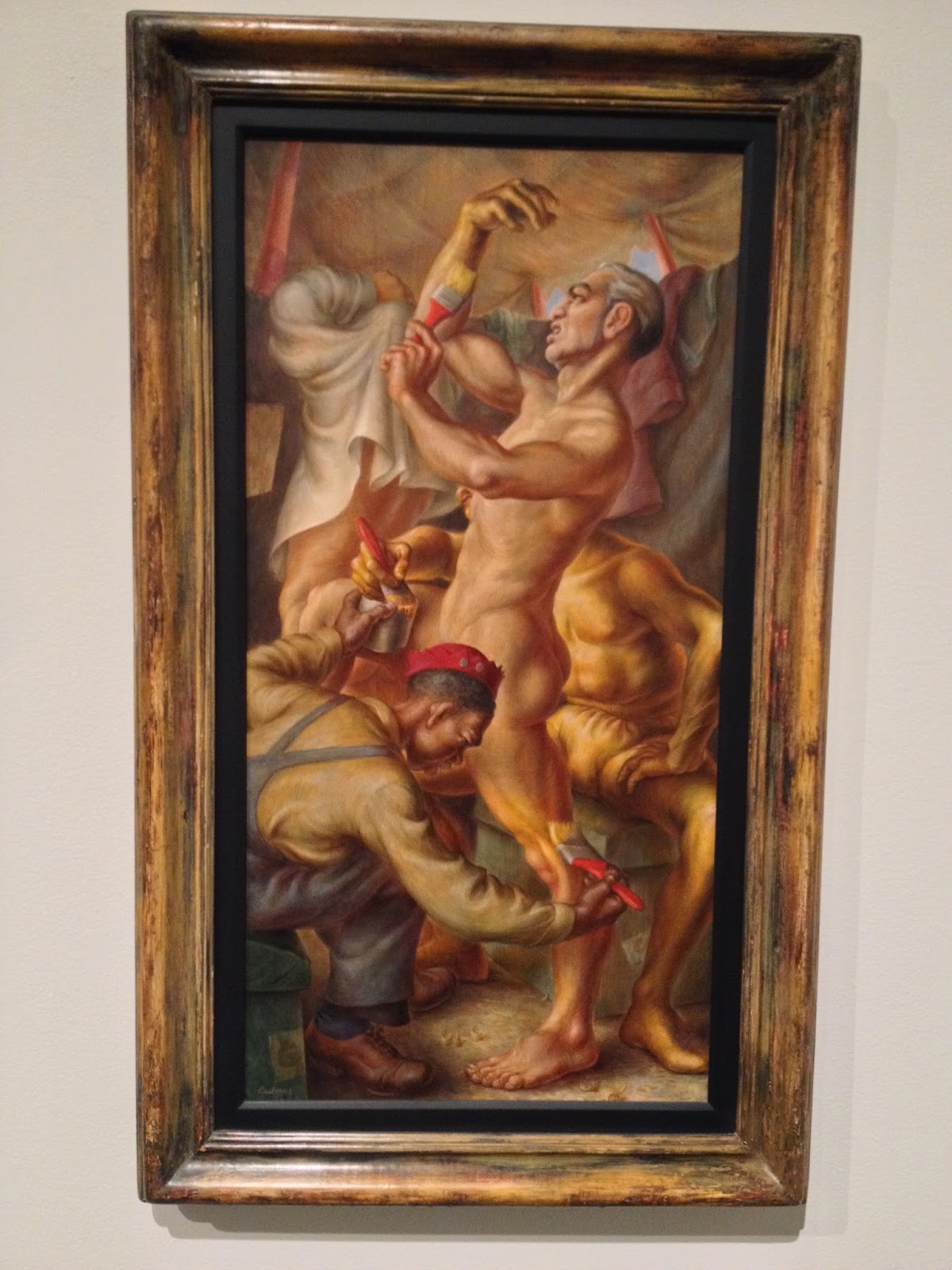 As it happens, the museum also has a portrait of Jared French, an artist who worked closely with Cadmus and who served as his model for one of the acrobats (though I don't see the resemblance): 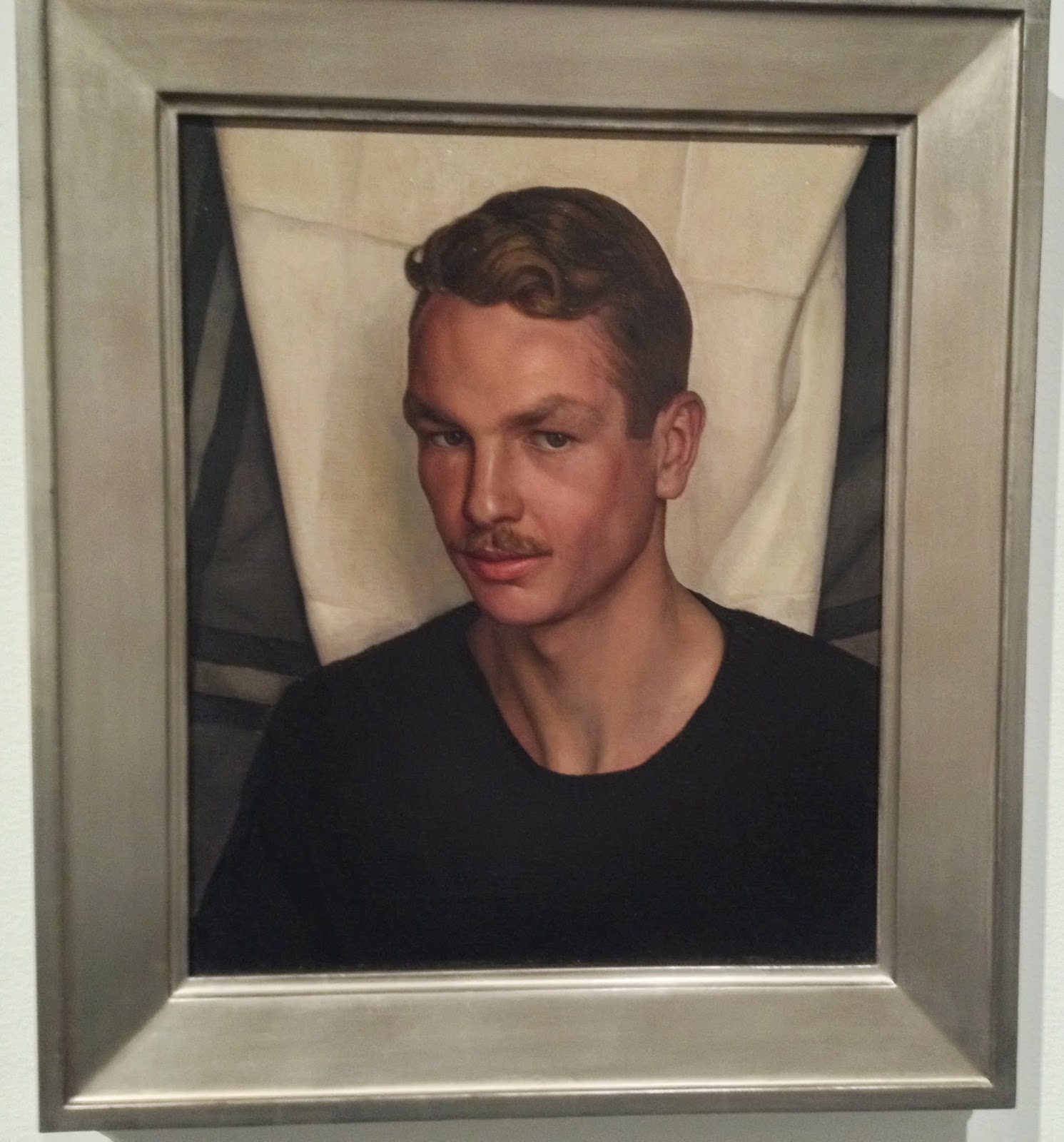 By now it was nearly two, so we left the museum at walked to the nearby E.A.T. Cafe, owned by Eli Zabar of the Zabars family.  On such a cold day (it was 23 when I went to the museum), I started with the mushroom barley soup: 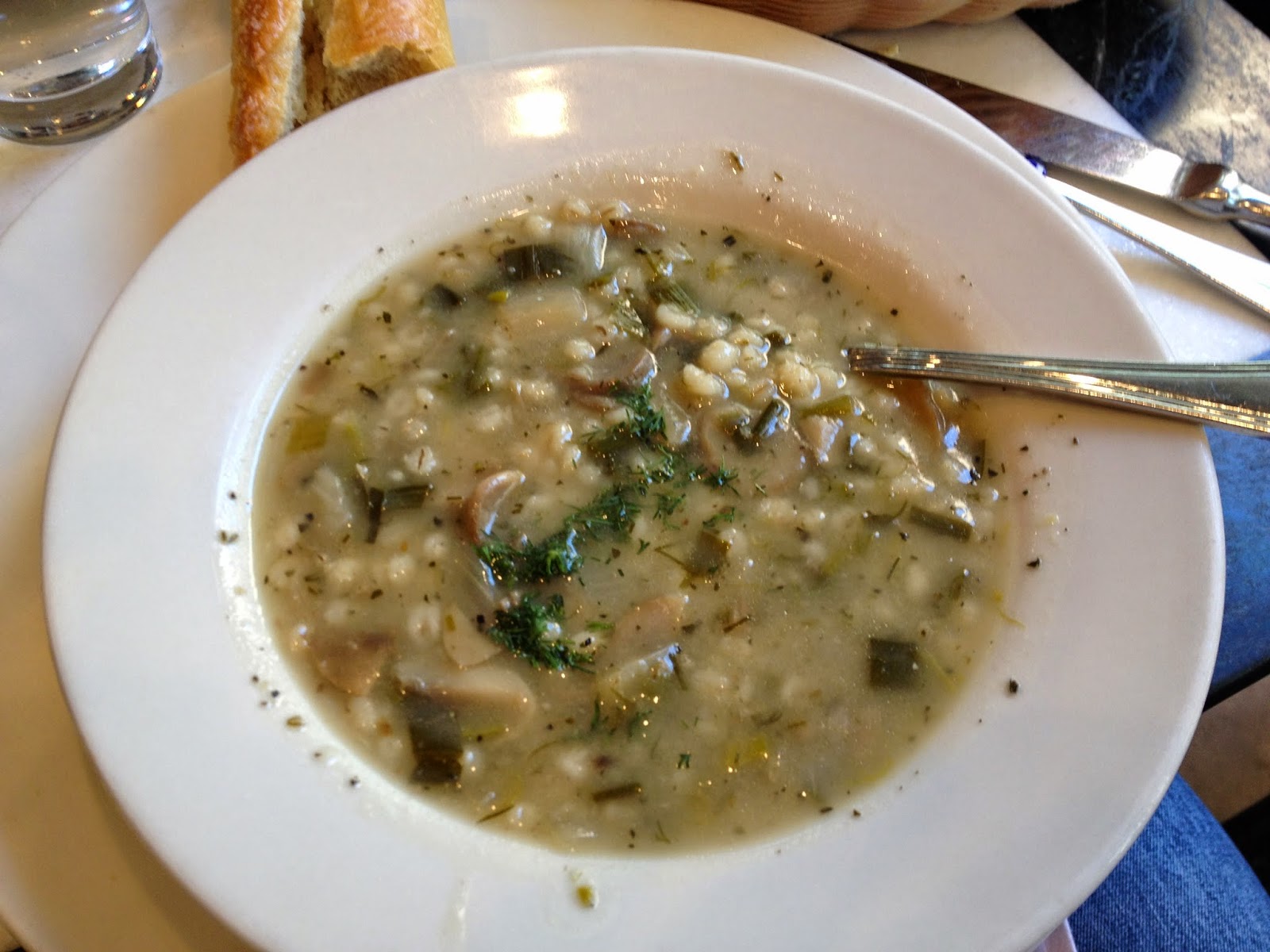 Followed by the two salad plate:  egg salad and roast duck salad.  It was so filling, I ended up skipping dinner.  It was very, very good. 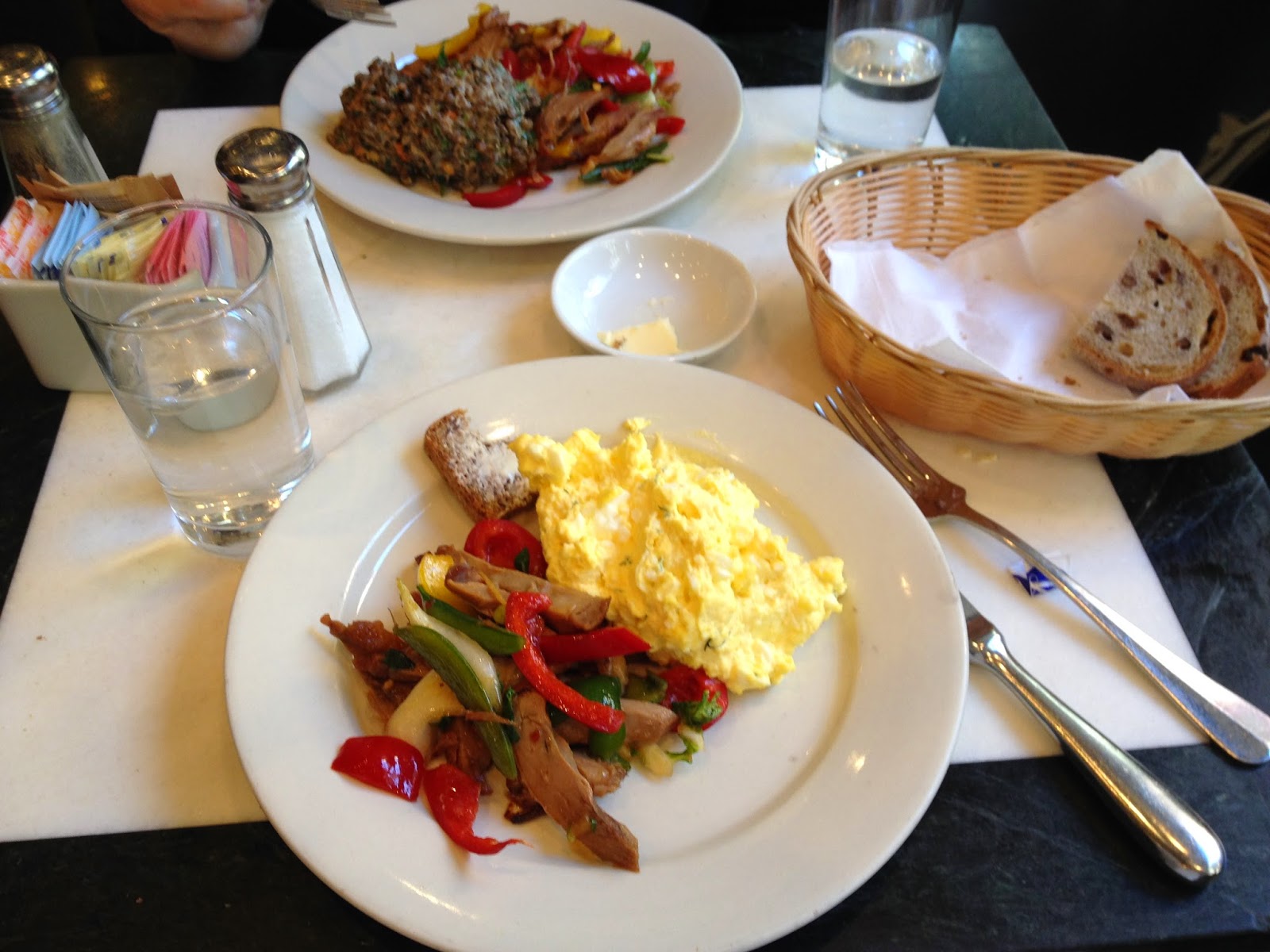 I had plans to meet a colleague at Lalo Cafe on the Upper West Side, so we caught the crosstown bus and went to the cafe early.  My uncle decided to finally break his 108 day pastry fast and bought something so I could record this momentous event: 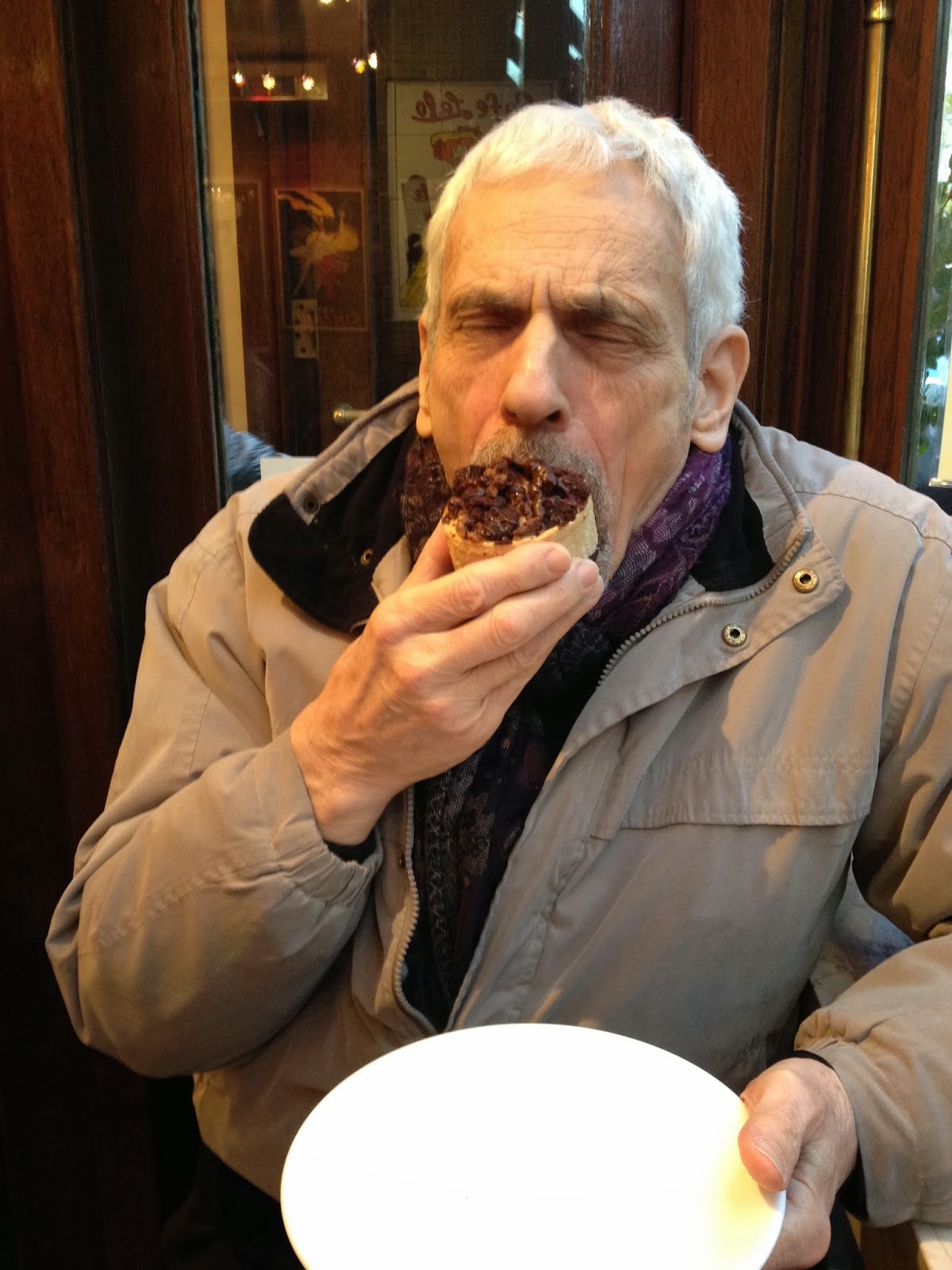 My colleague Katja arrived and took some photos of us, including this one of me trying to take the photograph above: 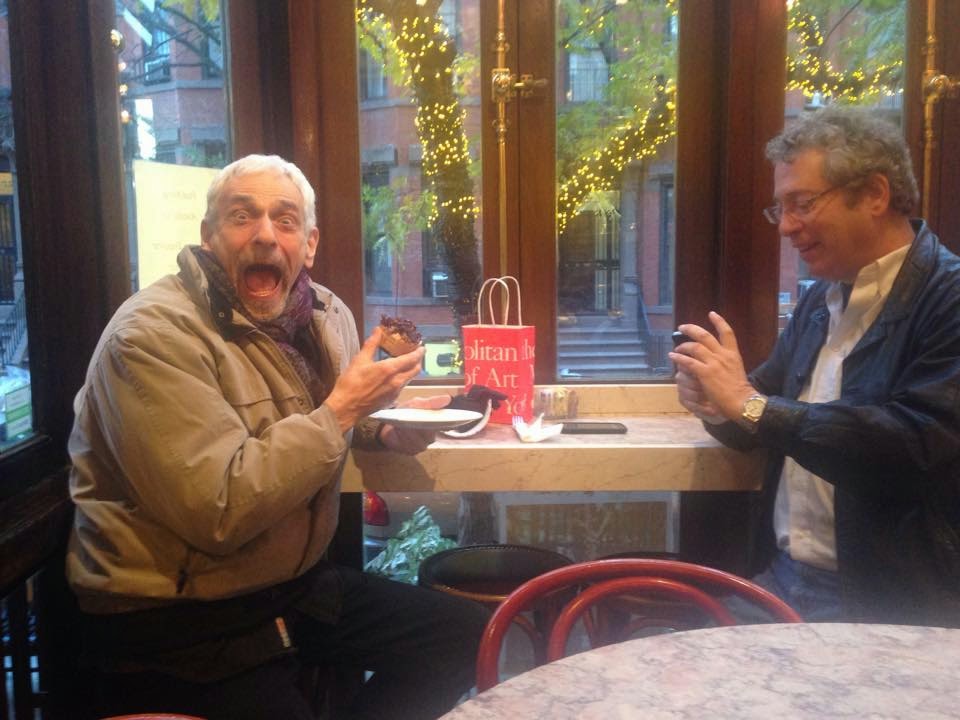 She also took one of the two of us together: 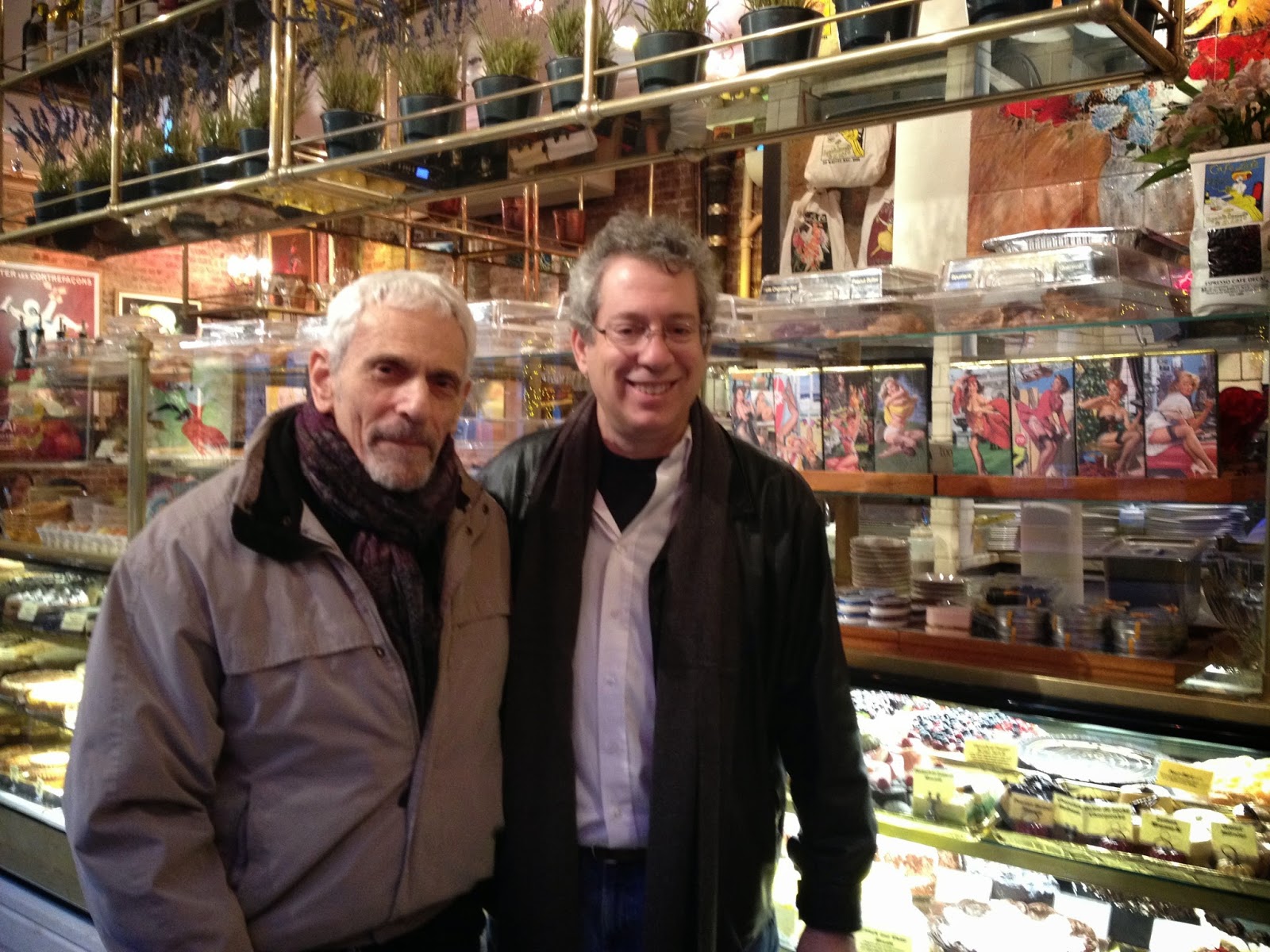 Katja and I sat down to talk and my uncle went home.  I was pretty full, but I still ordered coffee and cake.  I got the Saint Honore Torte, which was mostly whipped cream and puff pastry.  I couldn't finish it, but took home a third in a doggy bag. 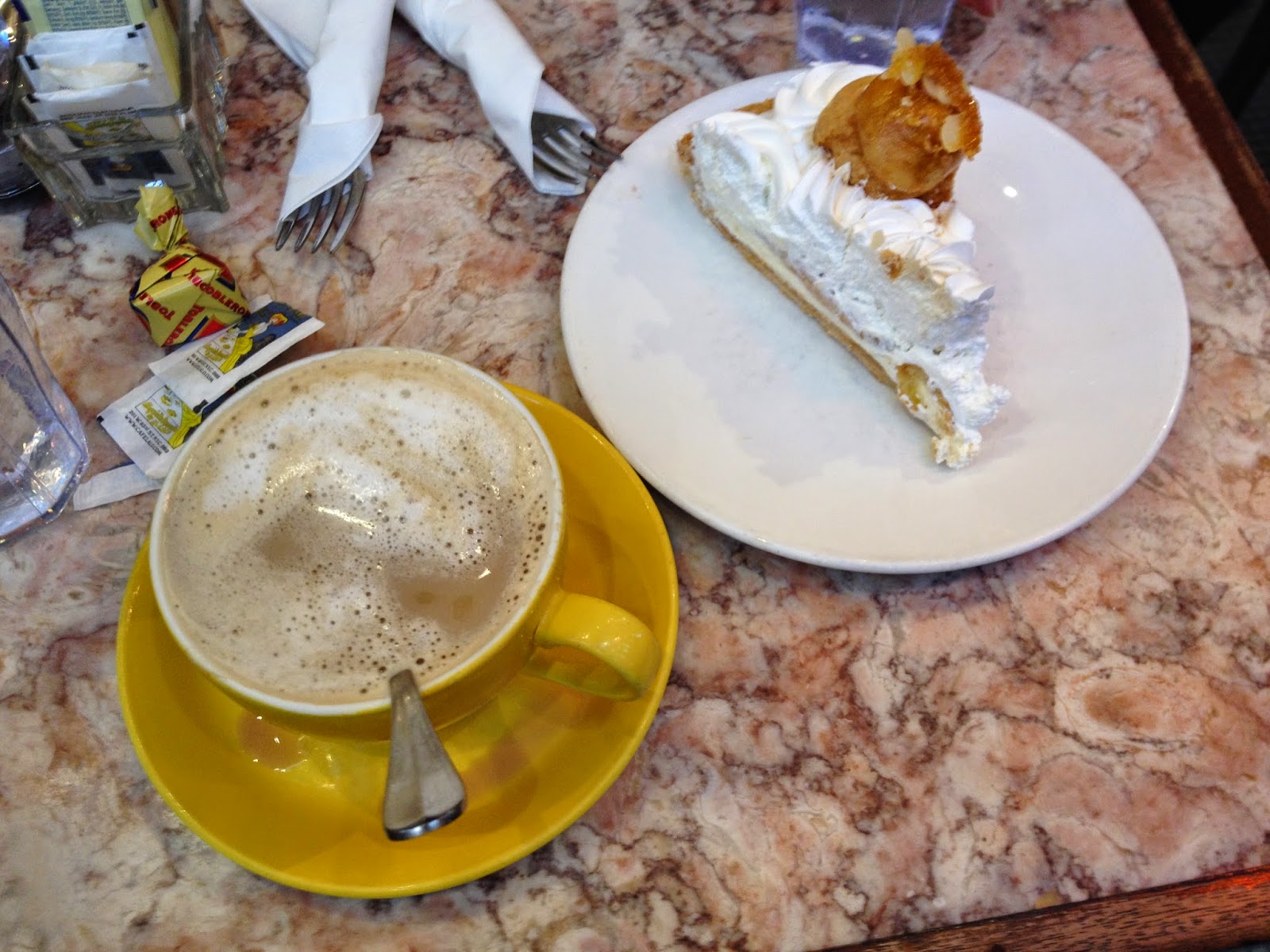 Katja didn't do much better; she left over a third of her Black Forest Cake: 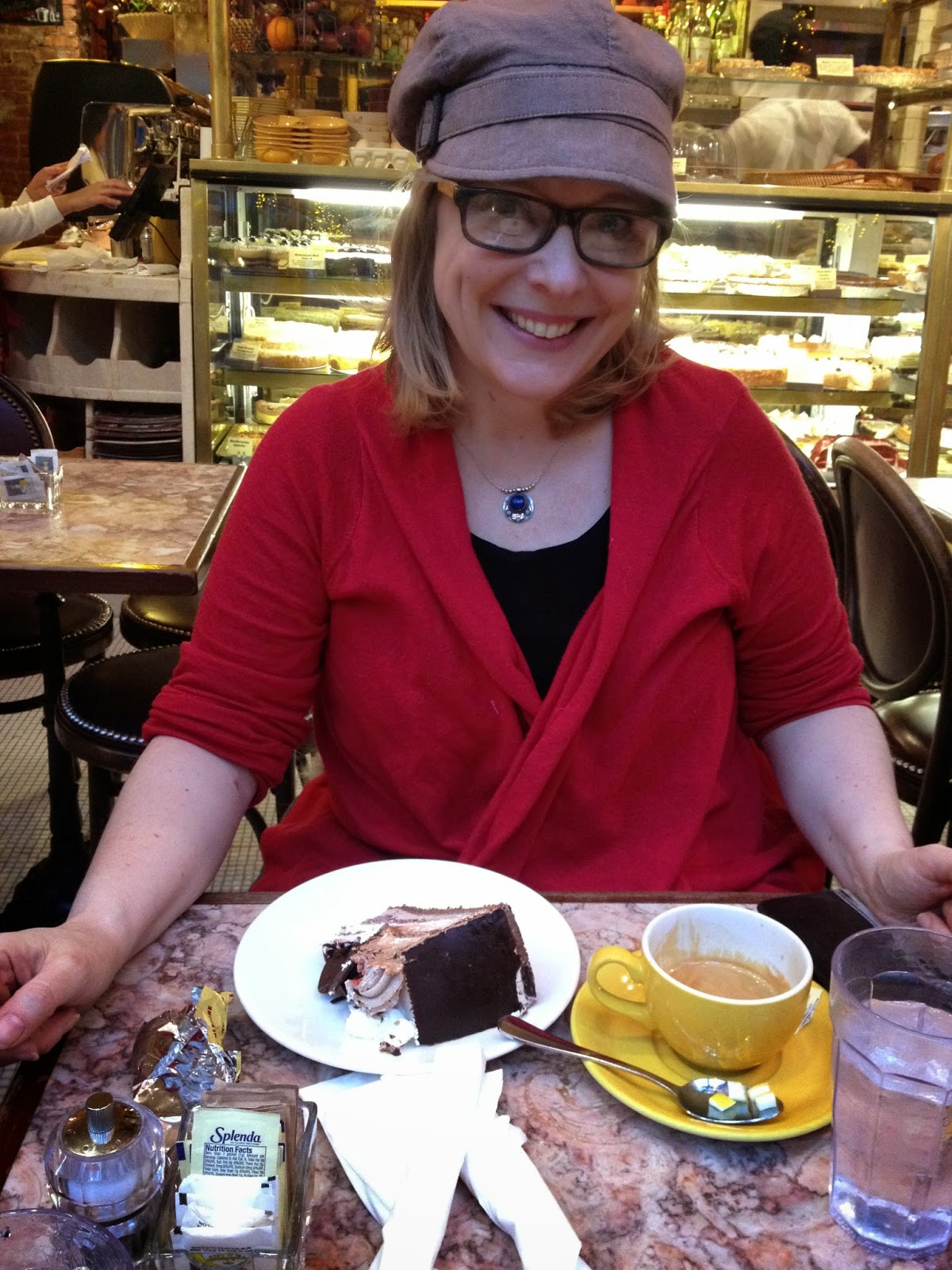 We had a long conversation about our research projects and academia.  It was great to catch up.

After that, I made my way home to battle the crappy wifi in the hostel.  Along the way, though, I saw the Empire State Building all lit up as I got off the subway at 23rd st. 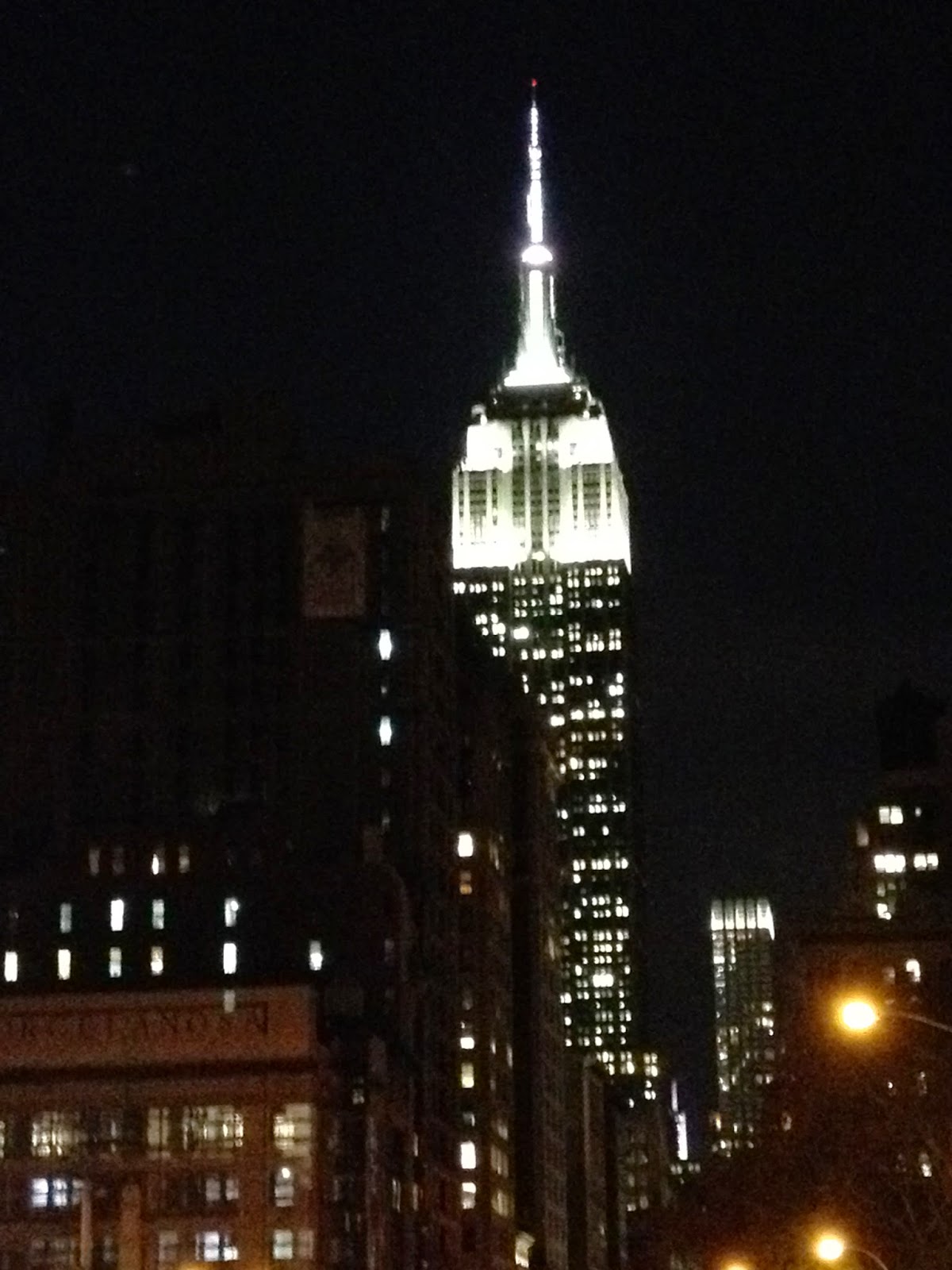 The one thing I don't think I can get used to, though, is the way New Yorkers pile their garbage in giant trashbag piles on the curb for pickup.  It just seems wrong.
Posted by J.B. at 7:27 PM