I've pretty much wrapped up my research at the YIVO archives.  I've gone through the principle material they have and besides, they're closed Friday, Saturday, and Sunday.  I went back this afternoon one last time, just to make sure there wasn't anything else I needed.

The weather was noticeably warmer today.  Above freezing the whole day and once, this afternoon, I think it may have crossed over into 40.  Tomorrow, however, will be colder, so I got the Macy's coupons from today's paper and went to their flagship store.  Unfortunately, their stuff is very expensive and not covered by the coupon.  In the end, I went across the street to Old Navy and bought what I needed for 90% less than what Macy's wanted to charge.

Then I jumped on a train and headed down to Ground Zero.  On my last visit to New York in 2003, I had only come up for the day from Washington, D.C., and had no time to see the site where the World Trade Center was destroyed.  Today I remedied that. 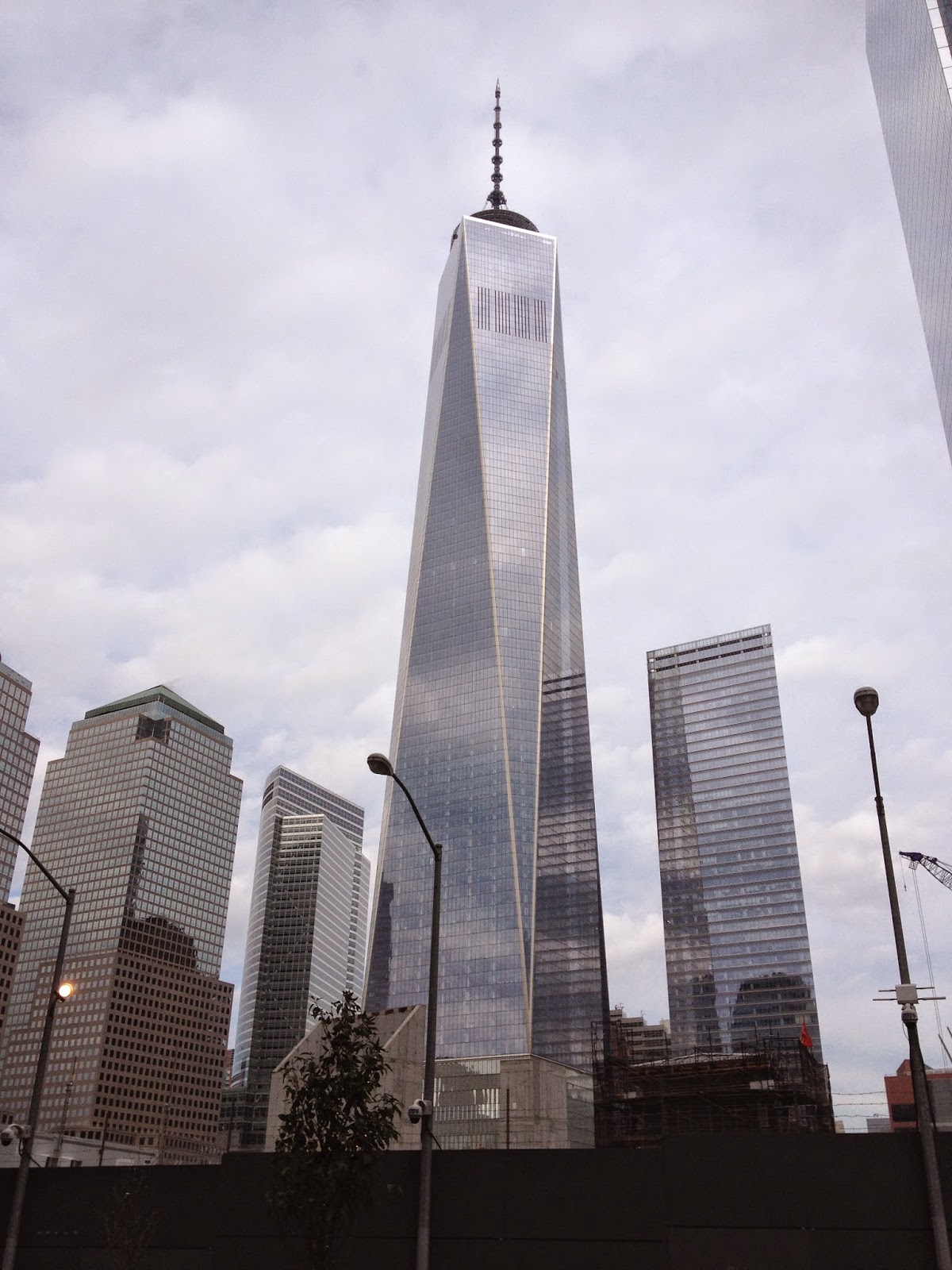 Walking to the site, I was surprised to see a large inflatable rat.  At first I thought this might be some strange attack on al Qaeda, but then I learned it's a labor protest against a local developer using non-union workers on a construction project. 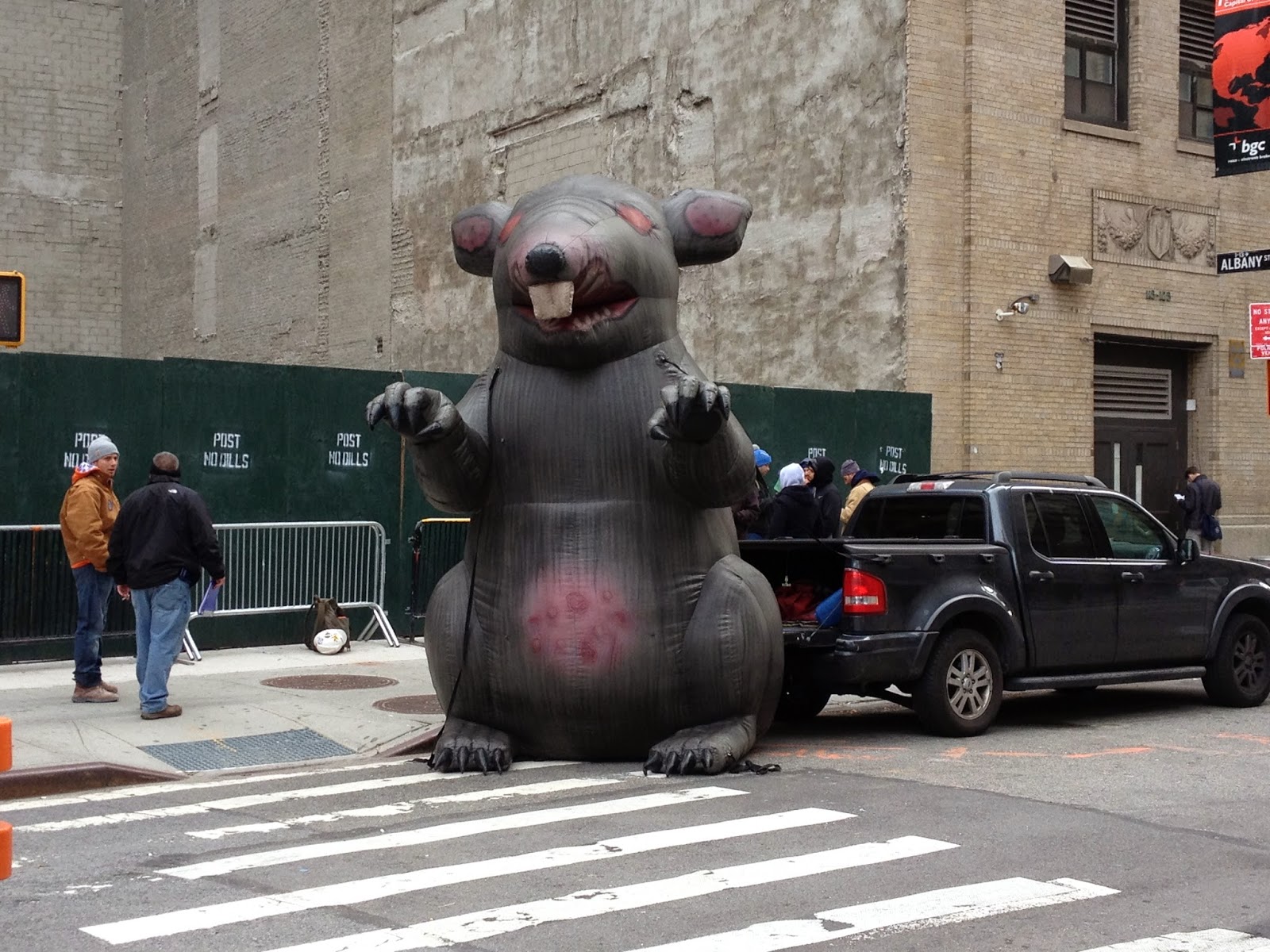 The first reflecting pool I came to turned out to be in honor of the all the police, firefighters, first responders, and city workers who lost their lives in the call of duty on that day.   I found the design moving, but I remain surprised that throughout the memorial and museum I never saw any material on how the space was designed and why.  Perhaps I just missed it. 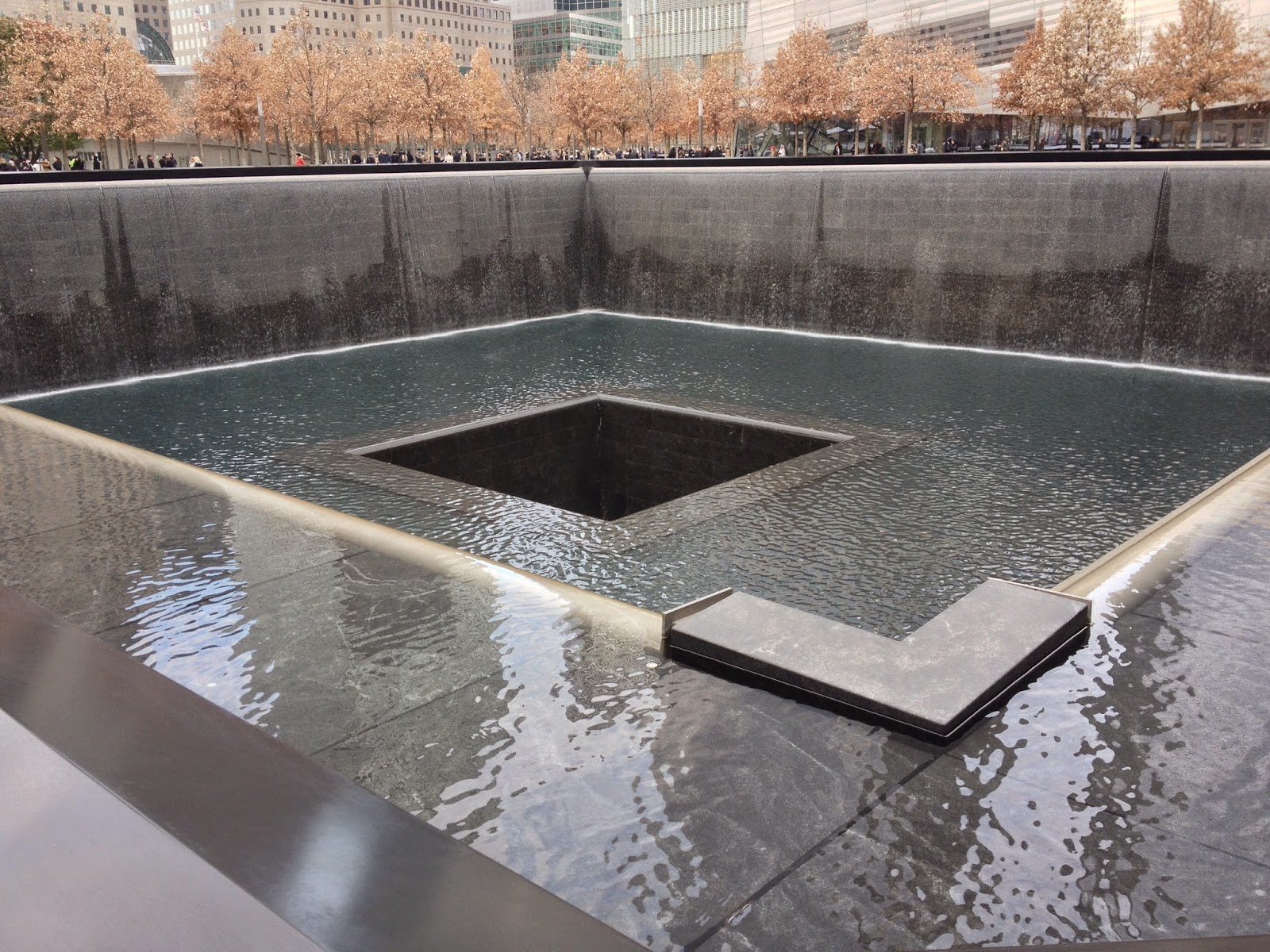 The main memorial space inside the center starts off rather low key, with just a few beams and such.  Then one moves to a space inside the footprint of Tower 2 where photos of the dead are displayed and voices read out the names of those murdered.  It's really striking to realize how much suffering can be caused by so few people. 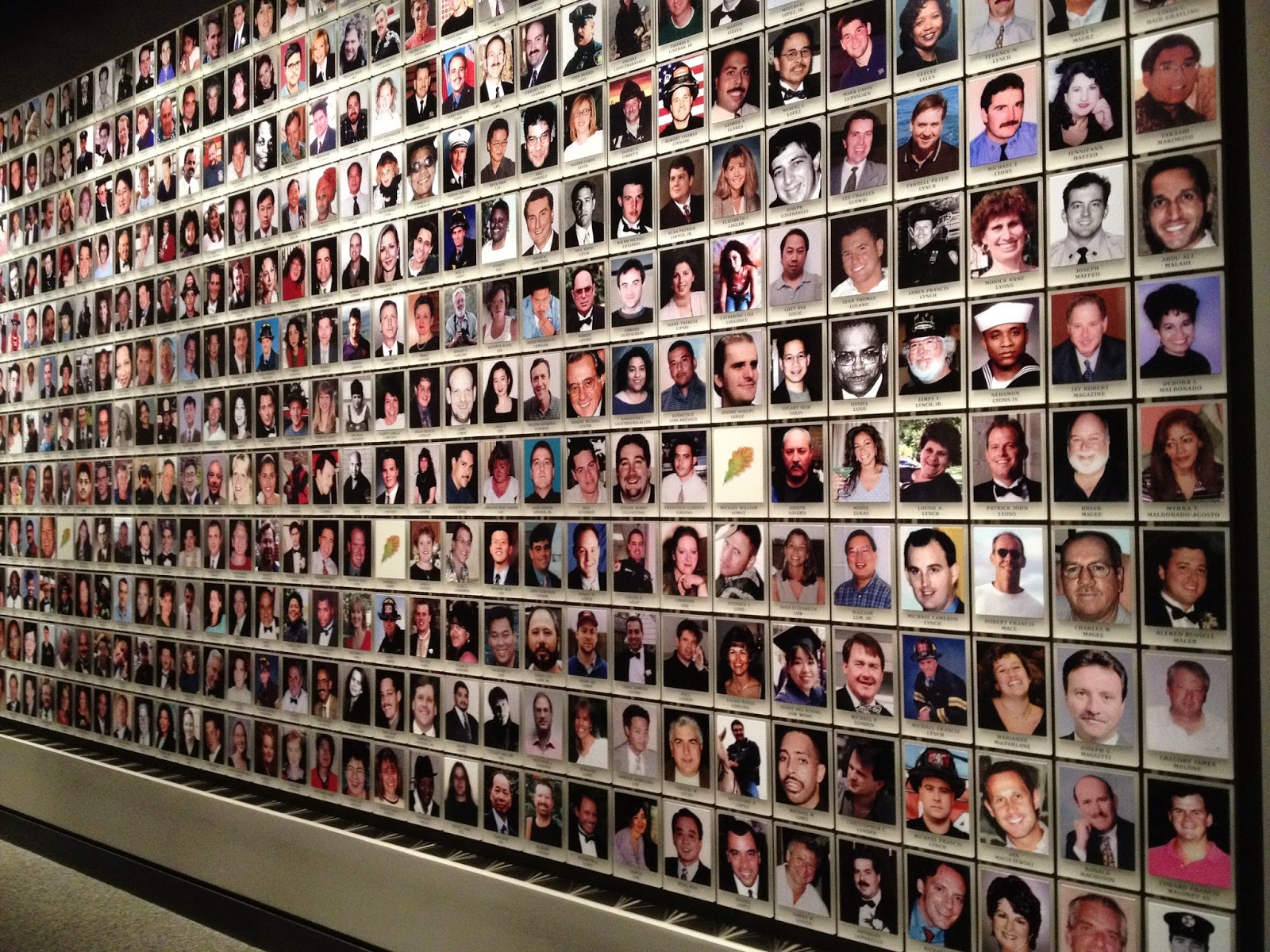 Along the way, they have displayed several long metal columns, twisted and broken on one side.  It turns out that these two sections were originally a single set of columns, which was severed when the first place hit Tower 1. 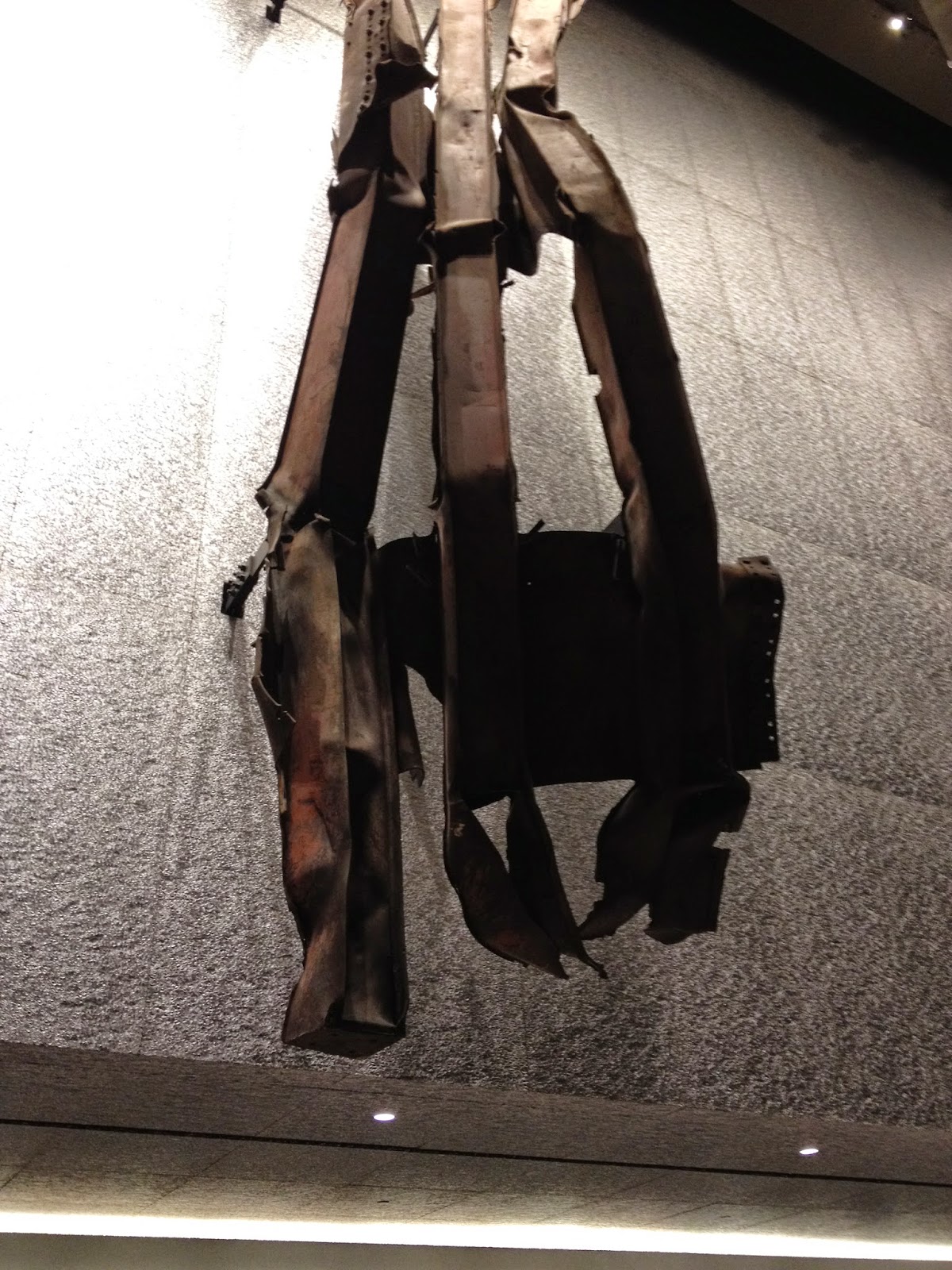 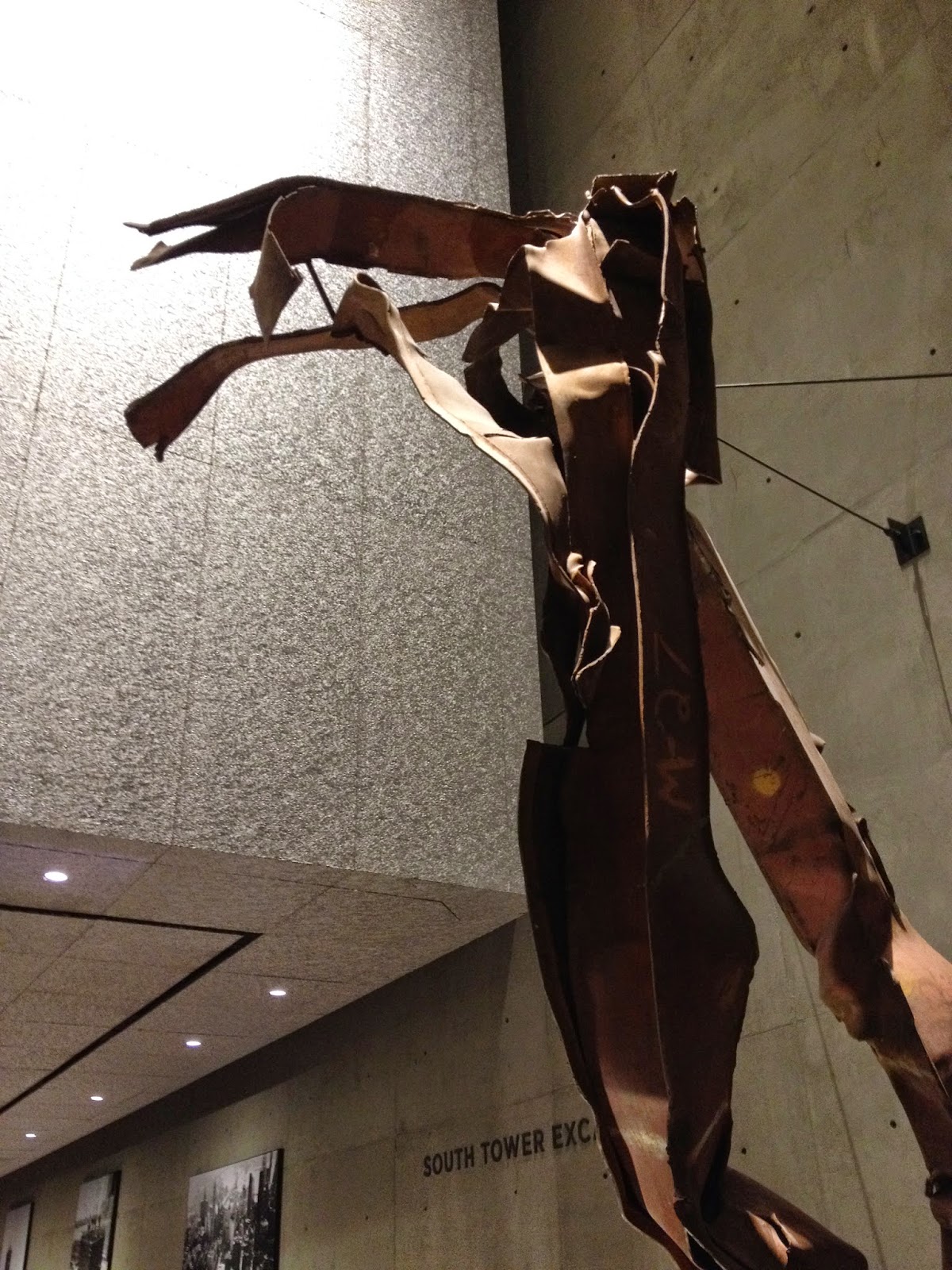 I entered the main information area with no small degree of trepidation.  I had found myself close to tears at various points and so I moved through the events of the day rather quickly, avoiding certain areas.  Nonetheless, I was deeply moved by it.

From the Memorial, I made my way to Broadway and ate in a deli along the way.  Then I went to Soho to visit a small museum, the Leslie Lohman Museum, which has a famous painting by Paul Cadmus called Bar Italia. 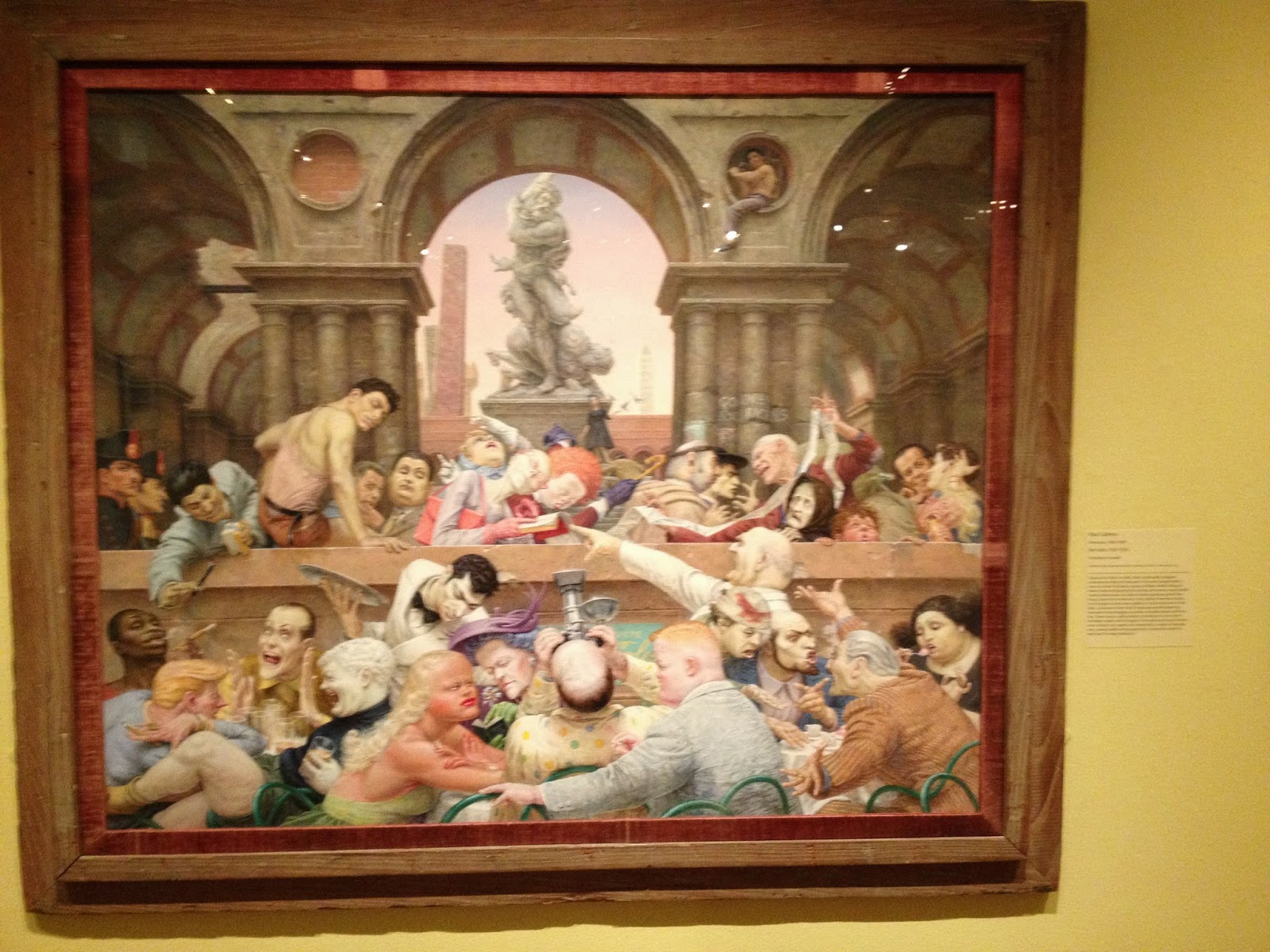 Cadmus' style is sometimes called "magical realism," but he's closer to Thomas Hart Benton, except more sarcastic.  His paintings are often peopled by grostesques as part of his critique of every day life.  They're also quite funny.  For example in this piece, there are a group of monks pouring over lottery tickets while ignoring the starving woman in front of them.  A group of American tourists in the lower front can't speak to each other, though the woman in the purple hat is reading a book titled Italian in Three Minutes.

After heading to the archives I stopped by the Israeli bakery again for a snack.  One dessert I often saw in Parisian boulangeries was the canelé, so I ordered one. It's pretty good.  Very doughy. 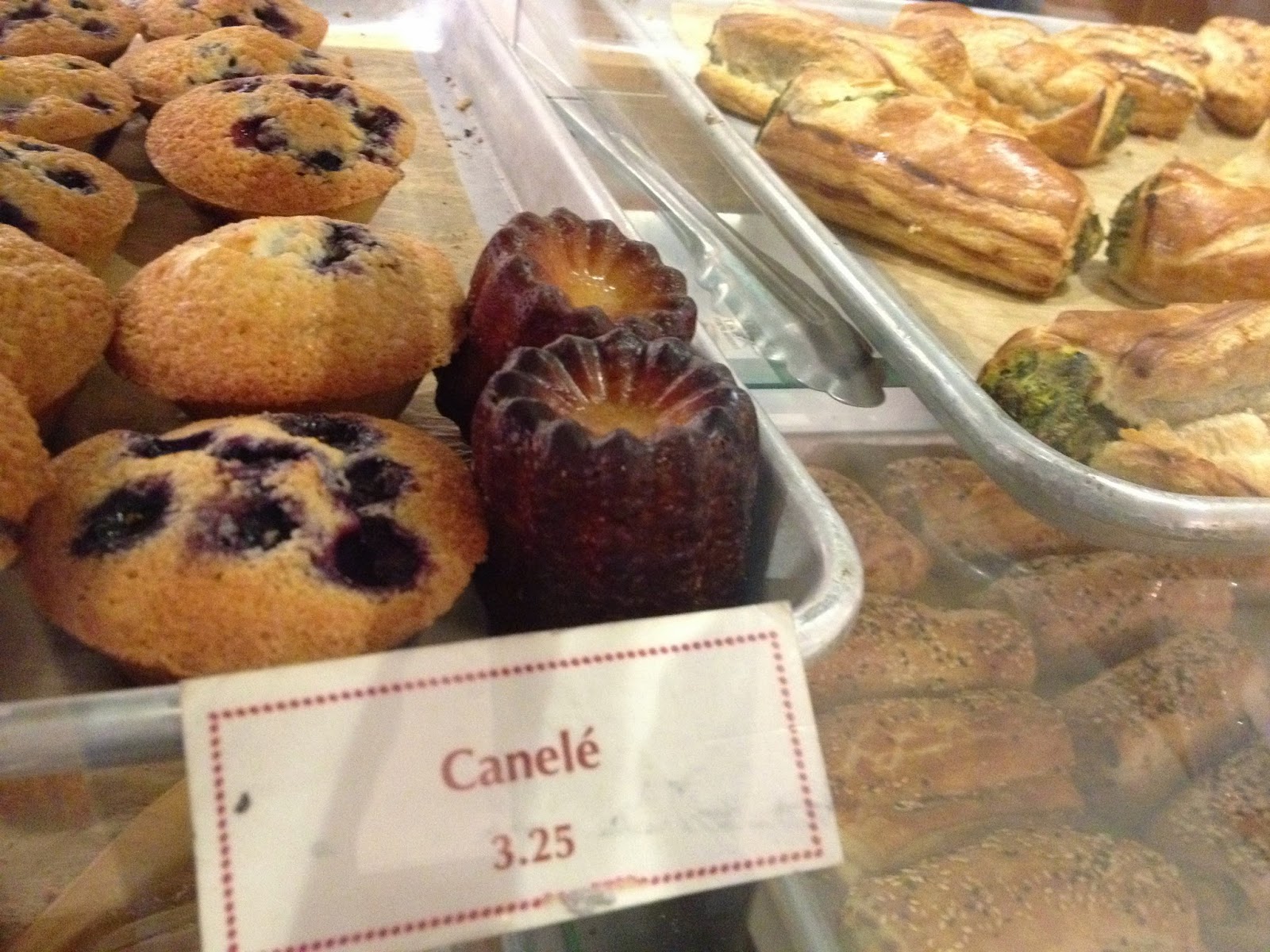 Then I walked over to ABC Carpet & Home.  I love to browse through this store, but the last time I was here in 2003, the power over a quarter of the U.S. went out.  Thankfully, no problems this time. 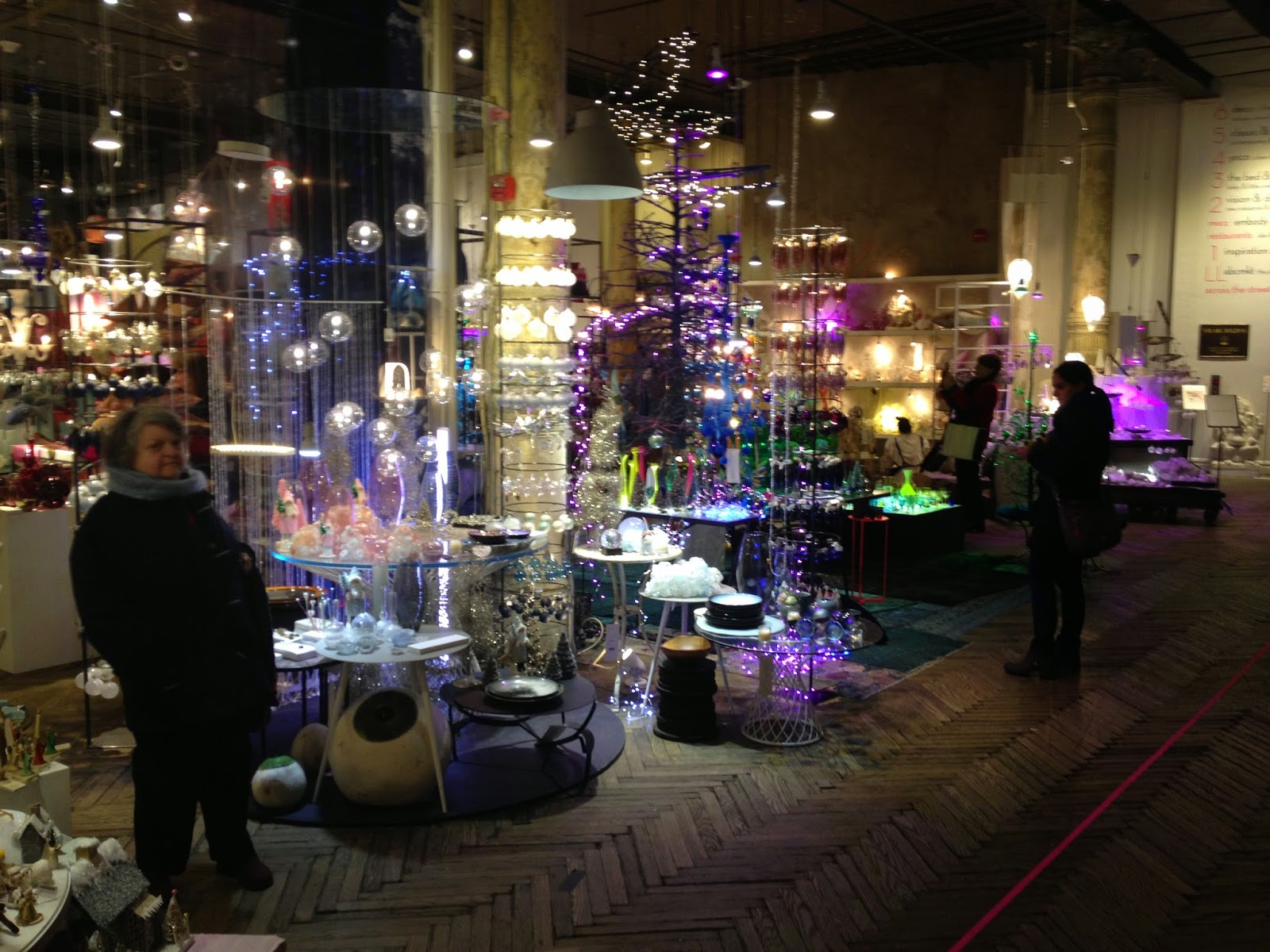 I got a kick out of the some of the more over priced and pretentious items for sale, such as these table decorations made from preserved wasp nests. 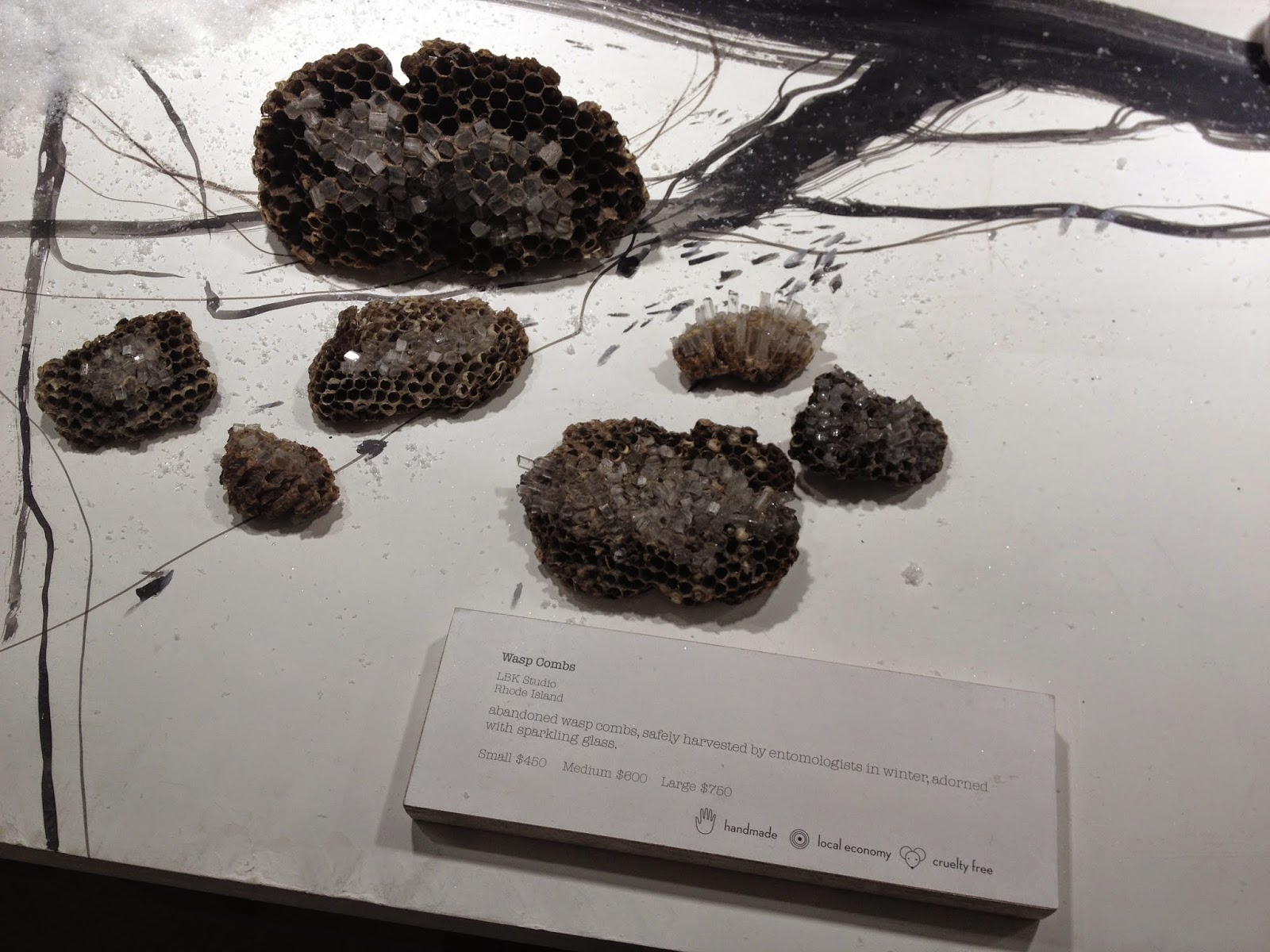 Check out the prices!

As it happens they were having a special vendor event for their "artisanal table" section of high priced, high end gourmet food products.  They had samples and some good hors d'oeuvres. 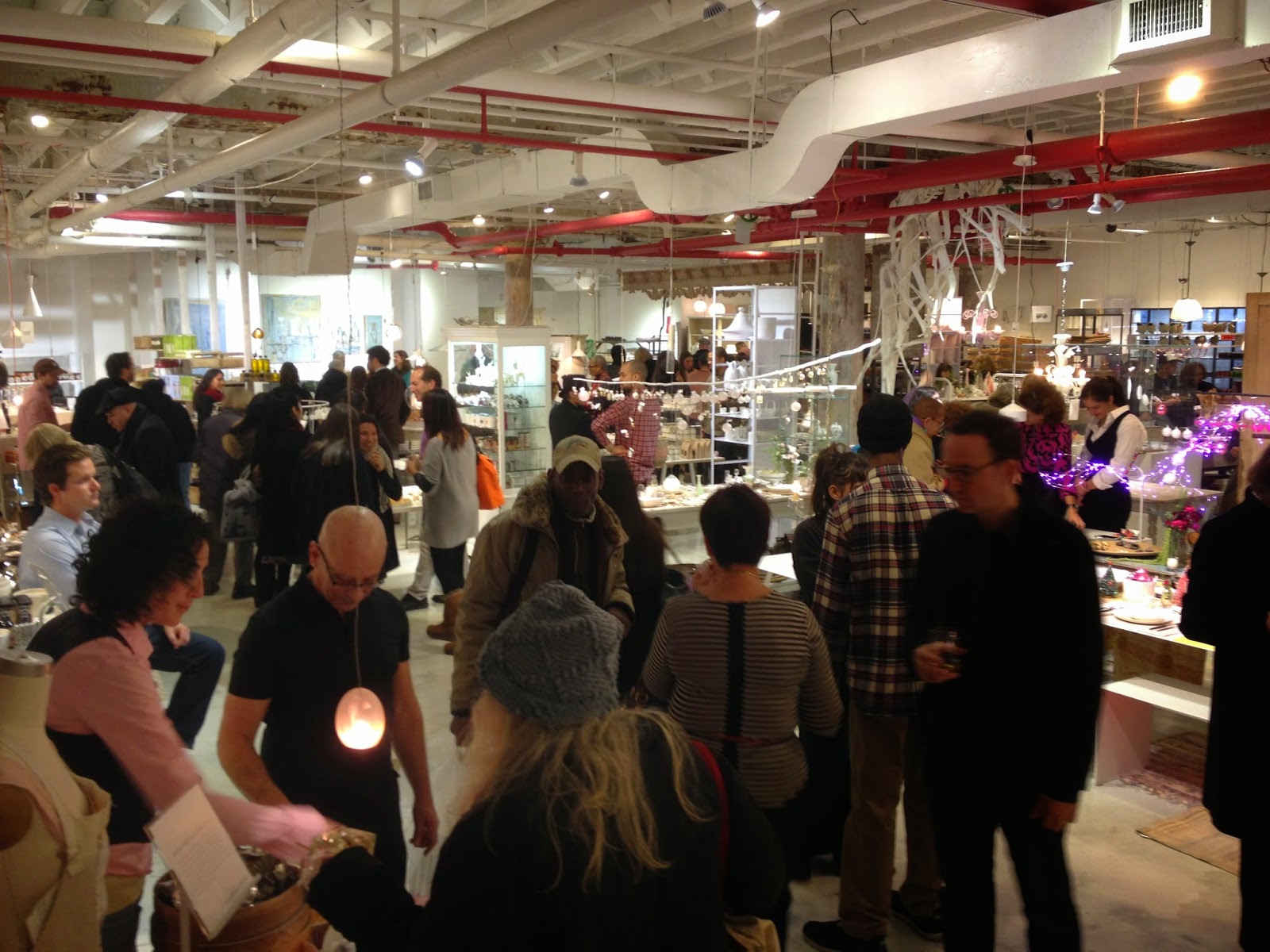 After dropping my stuff off at my room, I went back to the Center for Jewish History for a panel talk on the renewal of Jewish life in Poland. 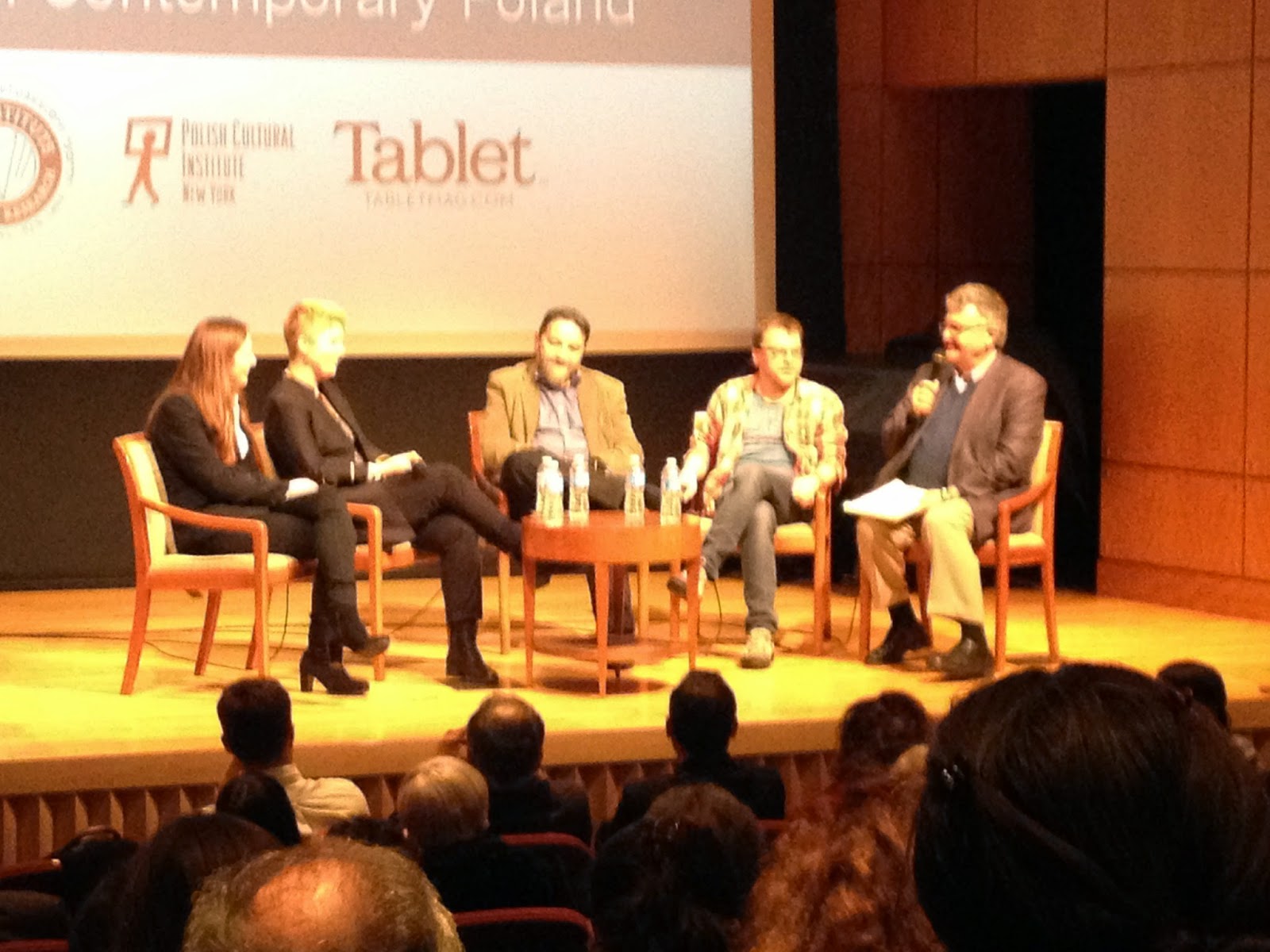 It was quite interesting, but I'm too tired to write about it tonight.  I'll say more about it tomorrow.
Posted by J.B. at 7:41 PM