I had hoped to go to the Brücke Museum today, but when I checked their website, I found out that they closed a week ago in order to change installations and will remain closed until after I leave next week.  Very disappointed.

So instead, I decided to visit the German Historical Museum on Unter den Linden.  I've never been there before, but they had an exhibit on the Soviet Gulags put together in part by a Russian human rights group called "Memorial," which is being persecuted by Putin for publicizing Soviet crimes.  I decided to check it out while I had the chance.

Before I got that far, though, I saw they had a special exhibit on "Destroyed Diversity," which is Berlin's theme this year.  One display concerned a set of memorial exhibits created by a group of students at a technical university in Köpenick.  They were very strict about not taking any pictures so I made notes on my cell phone (at least two guards hung around me to make sure I was writing, not photographing).  Unfortunately, I can't find my notes, but I remember where they were so I'm going to try to visit them tomorrow.

The Gulag exhibit had the same strict rules, though I did manage one quick snap of this exhibit on items created by prisoners for their own use. 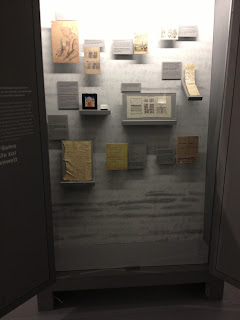 So many of the initial victims of the purges were high-ranking communist officials who had blood on their hands from earlier persecutions, so it's hard to feel much sympathy for them.  Of course, they were joined by millions of other innocents whose only crime was to run afoul of someone in the system.

Another special exhibit was on German travel posters of the 20th century, so I thought I would take a quick look. What I didn't expect to see was this. 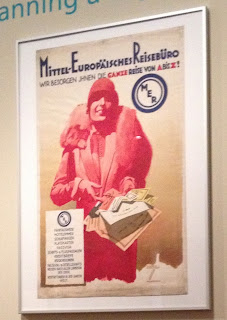 This is yet another exhibit where I wasn't allowed to photograph, but I snuck it in when no one was looking.  That's why it's at an odd angle and I cropped it to make it bigger (I took it from some distance).

The Mittel-Europäisches Reisebüro (the MER) embodies what Hannah Arendt called "the banality of evil."  In this phrase, she sought to capture the kind of evil not carried out by Satanic mustache-swirling villains, but rather by faceless, passionless, anonymous bureaucrats carrying out routine-appearing tasks in cluttered, undistinguished offices.  She famously came up with this idea, and misapplied it at the same time, at the trial of Adolph Eichmann, who was far more ideologically committed to the genocide than Arendt was aware.

The MER, on the other, did exactly that.  As the main travel office for the German government during the Nazi period, the MER booked holiday charter excursions for Nazi officials wishing to vacation on the Mediterranean or Paris.  When's Eichmann's office began to ship Jews and Roma to the death camps, it turned to the MER to book the trains.  They eventually negotiated group charter fare rates to send Jews to Auschwitz and Treblinka.  They used the same forms and did the same acts as if it were just a normal holiday excursion, only these were always one way (except for the guards on the trains, who required round trip fares).

Although it changed its name in 1945, the MER's successor is still around today.

I decided to check out the main permanent exhibit.  For this, you are permitted to photograph.  I took a couple of shots of propaganda posters for use in teaching.  Like this racist, anti-French poster from just after WWI: 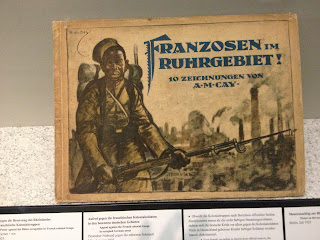 I also really loved the way these Weimar-era posters for art exhibitions looked: 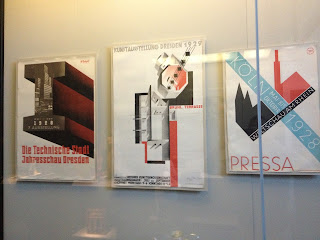 I snapped a few shots of popular culture from the Nazi period, like this: 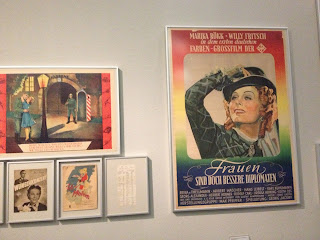 While there were many Jewish artists who worked during the Holocaust and perished, perhaps none moves me more than Felix Nussbaum.  I posted one of his pre-war paintings at the Berlinische Galerie a few days ago.  Here's one he created in 1944 while in hiding in Belgium, a short while before he and his family were captured and sent to Auschwitz where they were murdered. 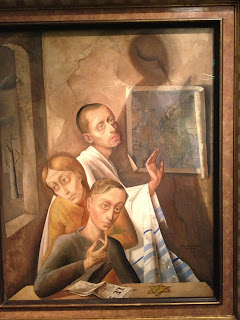 I ate lunch in the museum cafe and then headed to the Film and Television Museum.  This is one of my favorite places in Berlin, but I wanted to see if they said anything about Bruno Balz.  As it turns out, they do discuss his song "Davon Geht die Welt Nicht Unter" ("It's not the End of the World"), which I want to write about and even have a copy of the song on display.  Unfortunately, they include nothing of the back story about how he wrote it in an SS prison while being tortured and that he assumed the song would be the last thing he ever wrote.  Instead, they note its context in the 1942 film as a piece of moral-building popular culture during the war.

It was after 4 pm when I left, so I decided to walk over to the Cafe Einstein Stammhaus near the Tiergarten.  They have a lovely garden out back, which I've been to before. 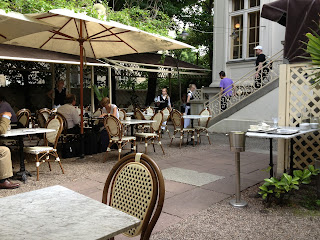 In addition to ordering my regular cafe au lait, I saw they had Kaiserschmarrn with roasted plums on the menu.  I knew I couldn't pass this up.  Kaiserschmarrn are basically scrambled pancakes.  I make them during Passover (they can easily be made with matzah flour), though I skip the raisins soaked in rum, because who has 30 minutes to wait? 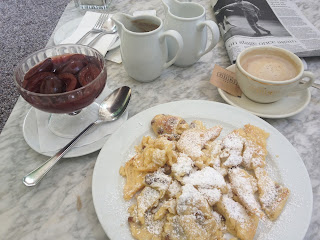 Roasted (Italian) plums (known in America as "prune plums") are the traditional accompaniment, but I've had apple sauce (in Salzburg) as well.

It's been a warm and somewhat humid day, but I hung out in the garden for a while, doing the crossword puzzle. 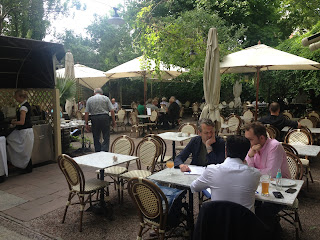 On my way out, I checked out the display case.  If I come back again with the students, I think I'll get the strudel: 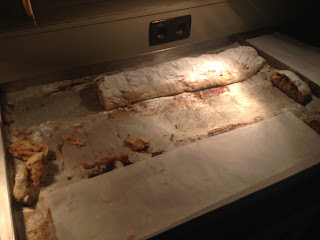 I discovered while going through the "Destroyed Diversity" exhibit that I've overlooked one of the most important German newspapers of the 1920s, the Vossische Zeitung.  I've check online and they have a copy at the Staatsbibliothek zu Berlin, so it's back to Westhafen in the morning.  If I can handle that quickly then I'll head to Köpenick to check out their memorials in the afternoon.