The Hell of Mauthausen

The rooms in the pension are ok.  The ceilings are high, but the pillows are low,  and the beds sag. 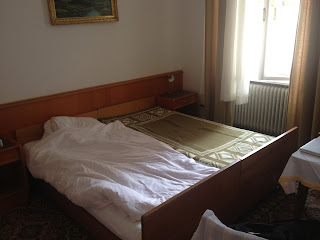 Breakfast was fine:  coffee or tea and juice, rolls, butter, and jam, cheese and meats.  I managed to get all the students fed and out the door by 8:25 to go the Westbahnhof for our train.

There’s no direct train to Mauthausen; you have to change in Linz to a local.  We only had five minutes to make our connection and it turned out that the platform wasn’t the one identified by the ticket plan, so I ran from one platform to another.  We got on, huffing and puffing, only to find out that the train was going to be delayed 6 minutes, which became 16. 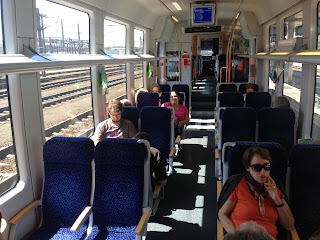 Eventually, we reached Mauthausen, which is basically a village on the banks of the Danube. 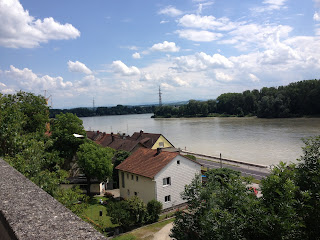 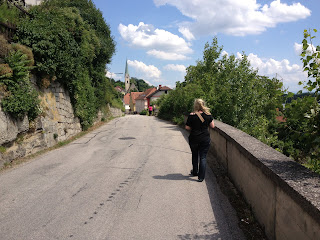 I stopped them near the station to have them read about a young woman who worked nearby and what she saw and did to help prisoners in the concentration camp. Then we walked the 2.5 miles to the camp. 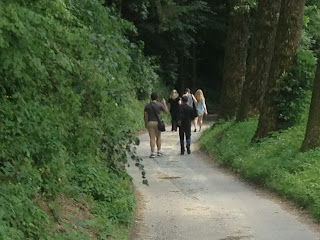 It had been seven years since I visited the camp and I forgot how far and how long the walk was.  The sun, heat, and humidity didn’t help.  Nor did the clouds of mosquitos that descended on us as we walked through a shady grove.  Some of the students were really hurting.  Finally, we reached the camp around 12:30 pm. 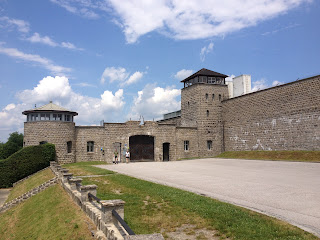 Since none of us had eaten since breakfast, we grabbed a quick lunch in the café, and then headed into the camp.  In order to catch our return train at 3:01 pm, we needed to leave Mauthausen camp at 2:00 (it had taken us an hour to walk there).  That meant our tour of the camp was somewhat rushed.

In going through the exhibits I focused on images drawn by surviving prisoners of conditions in the camp.  That took about a half an hour.  Then we went through the basement where prisoners were killed and then their bodies burned.

This is a list of the names of prisoners killed in the camp: 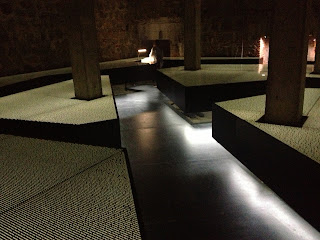 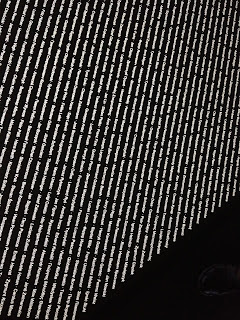 Then we went to the cremaotorium 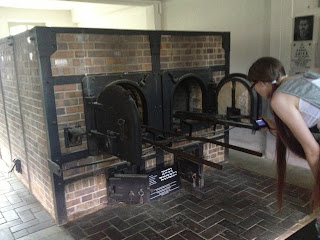 And finally, the gas chamber.  This is the door. 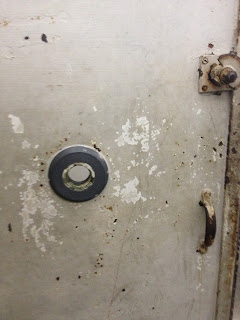 Unlike the death camps, the gas chamber at Mauthausen was only used to kill small numbers of people at a time.

With it rapidly approaching 2:00, we walked down to see the quarry where many of the prisoners slaved and died 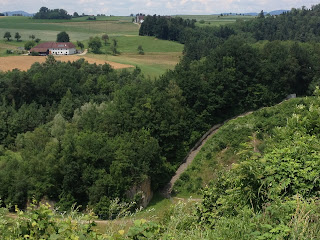 and then at 2:05, we started to walk down the hill back to the train station.  On the way back down, I noticed that the house nearest the camp had a bizarre display in front facing the camp.  I've decided it's a folk way of warding off the evil eye of the camp. 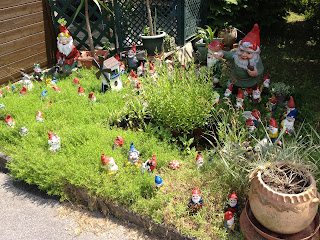 Even though we walked back mostly downhill, the students and I found it rather strenuous and my shirt was soaked with sweat.  Later, I could see salt stains on the front and back.

We actually reached the station with 4 minutes to spare, only to find out that train was 6 minutes late.  Unfortunately, I rushed the students on the first train to come in, which was going in the wrong direction, and one student was nearly trapped on it, as she went to the bathroom before I realized my mistake.

Because of the delay, though, we missed our connection in Linz.  By the time we reached the platform, the doors were closed and it was just beginning to leave.  Luckily, another train came along in 15 minutes.  Although we did not have seat assignments, this turned out to be much nicer than the train we booked.

I ended up chatting with the woman across from me who was born in Austria but had spent the last 30 years living in Berlin.  We talked about some of the artists on display in the Belvedere, and after we mentioned Klimt, Schiele, and Kokoschka, I mentioned Emil Nolde.  “He’s German!” she quickly said, “you shouldn’t list him with the Austrians.”  Later, when she talked about making Austrian Christmas cakes, I asked about Baumkuchen.  Again she said “that’s German!”

I could tell that the day had really worn the students down, so when we got back to the Westbahnhof, I treated them to a small sandwich at Trzesniewski.  The Wifi’s quite good there, so they all started posting, and some went and got other food.  Eventually we went back to the hostel.

For dinner, we checked out some cafes in the neighborhood, but price is very much an issue for students, so we went to this place called Centimeter, which prides itself on the size of its dishes.  I had the schnitzel, but it was too much for me.  We sat outside because it was cooler, but the humidity and mosquitos really got to us. 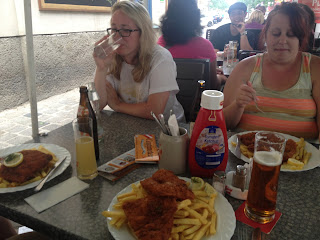 I decided to treat the students one more time, so I took them to Café Landtmann, near the Burgtheater.   Along the way, we had a spectacular view of Parliament at sunset. 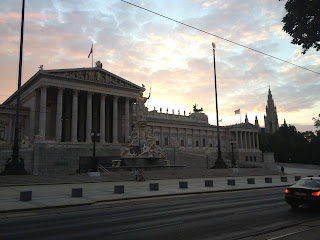 Café Landtmann is a famous, traditional Viennese café, and almost as importantly,  it had an air conditioned terrace. 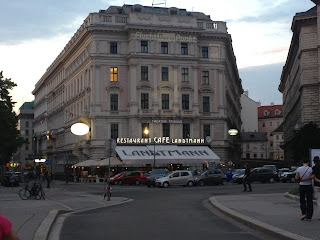 I ordered the Eszterhazy Torte with traditional “Oma’s” hot chocolate, which came with some very firm Schlagobers on top. 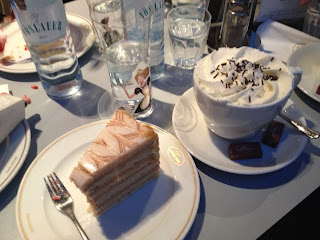 One student got a cornucopia of strawberries, placed inside a chocolate coated cone, which was filled with cake and strawberry mousse. 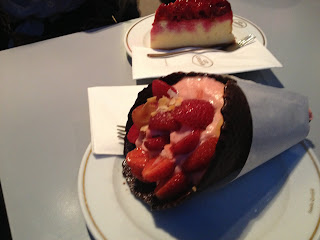 There was also a farmer’s cheesecake with raspberries (in the background, above), and a Chocolate Truffle "Törtchen." 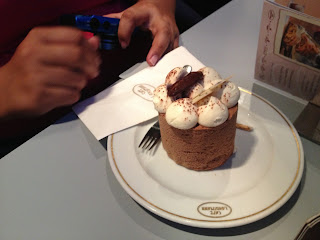 Afterwards, we took the tram back to the pension. 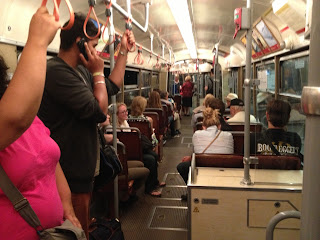 While it is cooler than Prague, the weather today was still pretty awful.  Even now, with the temperature falling, it’s quite sticky.  We’re supposed to get rain tonight with much lower temperatures in the morning.  I really hope so.

In the meantime, I think the students are really enjoying Vienna, particularly after Prague. When I ask, some say they prefer the less-crowded atmosphere of Vienna.  I think they are also liking the desserts.  Tomorrow is their day off, so hopefully they will have a chance to revel in the city.  I'm certainly liking it more this time than in the past.
Posted by J.B. at 2:19 PM