Discussing Scholarly Work: or What to do When You are in Line for Mustafa's Gemüse Kebaps

After spending five hours looking at microfilm (though rather productive as I got through nearly four major German newspapers for 1921, bringing my total to six), I was ready for a break.  I went to the Saturn store by Zoo station and bought what the Germans call a "handy," and what Americans call a "cell phone."  I still have to put in the sim card and power it up, but I have some time.

On the way, I decided I deserved a treat so I stopped at a cafe that advertised free wifi for customers and bought a "Streusel Taler," which was basically a big, somewhat dry, flat donut.  I used the wifi to check my email and yay!  I've heard from the archive I tried to visit yesterday and I have an appointment to go next Tuesday afternoon.  I'm making good progress. 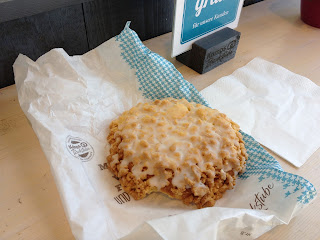 After a quick trip back to the pension, I headed off for Mustafa's Gemüse Kebaps.  If it had wheels, we would call it a food truck, but it doesn't.  It just has a really long line. 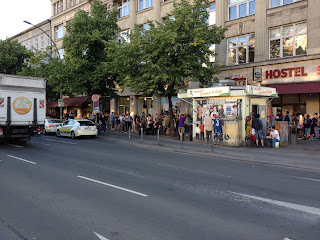 Ok, I know, it doesn't look like the line is that long.  Believe me it is.  It was 45 minutes from here until I could put my order in. 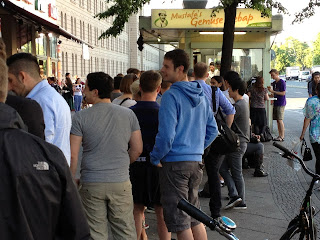 For a while I thought it might be a phantom line.  I've experienced those in Israel in the 1980s.  You walk into a bank and you see 4 people in front of you and you think, foolishly, "oh, that isn't so bad." Except instead of four people, it's really 8, as each is saving the place for one other.  Hence, a phantom line.

After about a half hour, one of the guys came out and started yelling an announcement to the crowd.  I wasn't sure what he was saying and as I turned I bumped into the guy in front of me.  We ended up talking and it turns out he's also a historian.  He's working on his Habilitation, which is essentially a second Ph.D. you need to get in order to be full professor.  His specialty is pedagogical history and he studying some schools organized along reforming lines from the 1920s and the 1950s.

He mentioned his girlfriend lives in Vienna, so I asked him what he thought were the differences and similarities between Berlin and Vienna.  He began by noting that both cities had been strongly affected by the Cold War, becoming isolated back waters, though Vienna had been shrinking since after WWI.  Since the fall of the Wall, both cities have enjoyed big economic booms, with Vienna now positioned to play a key role in the Balkans and eastern Europe.

At the same time, the post-war period saw the elimination of most of the old Prussian aristocracy from Berlin society.  Contemporary Berlin is free and open.  Come live here for three years, he said, and you feel like and are treated as if you belong here.  By contrast Vienna maintained its old order.  He used the German word "Stände" as he described the closed off circles that make up Viennese society.  This would be same word I would use to describe corporate life in pre-modern Europe (not business corporations, but rather social corporations).  His girlfriend is from an aristocratic family, and all of her family's friends come from the same social circle.  He once met someone from a communist family, and all of their friends were in the same communist circles.  I imagine the city he described as a set of floating Venn bubbles that might bump up against each other on the subway or in the market, but never, ever overlapped.  Unless you were already in one, you never could or would be.

He talked about how he thinks of society that needs to be shaped and constructed, while his girlfriend, coming from a highly ordered society, prefers a more anarchistic approach.  When he wrote out his name and email address, though, I couldn't help but notice the "von" in his name, indicating that his family had aristocratic ancestry.  In fact, he appears to be the descendent of East Prussian Junkers, out of Breslau and, before that, Bialystok.

We talked for over an hour while eating (we did eventually get served and the food was very good).  I couldn't take a picture while standing at a table, so this one of the shop will have to do. Like any good academic, he had several books to recommend, including Ulrich Raulff, Kreis ohne Meister about Stefan Georg, and Ernst von Salomon's Der Fragebogen, which concerns his response to de-Nazification. He had been involved in the right-wing assassination of Walter Rathenau in the early '20s, but then became a pacifist.  He also suggested I read Marcel Reich-Ranicki, Mein Leben.

So that's about it for today.  I've got a reservation to use the copying machine at the newspaper archives tomorrow and I'm hoping that will be it for there.  Then on Saturday, I'll head down to Dresden (assuming the Albertinum is still above the flood waters).