A week; that's how long I've been in Berlin.  Oddly enough, the day ended somewhat similarly:  getting caught in the rain at the Roma-Sinti memorial.  In fact, though, a lot has changed.

I slept a good 9 hours last night and had a leisurely breakfast.  I'd hope to rent a bike, but the place was closed until 1pm.  Instead, I headed to the Berlinische Galerie, which focuses on art produced in Berlin in the last 100 or so years.  My friend Bruce had recommended it, and I thought I would check it out.

As befits a modern art museum, its interior is quite modern. 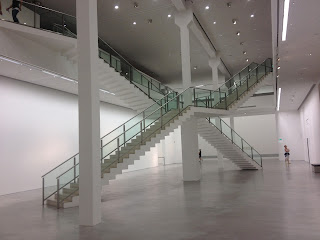 I wasn't sure what the rules were on taking pictures, but I figured it was always easier to ask for  forgiveness than permission.  The museum's main exhibition covers the rise, fall, and rebirth of the arts in Berlin.  The first room contains art reflecting the imperial tastes of the turn of the century. These are then contrasted with the emerging Berlin secession movements and then dada.  The dada room was the first where I could snap a few shots.

This first painting was highlighted by the Nazis in their attack on modern art: 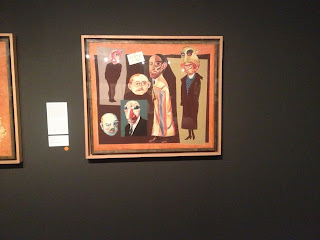 I love this sculpture:  it's called "Prussian Archangel" 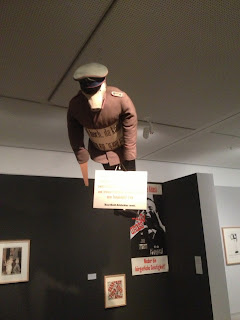 They had a very  nice collection of German Expressionist works; in many ways I found this museum's collection to be better than the Albertinum in Dresden.  Here are two examples I particularly liked: 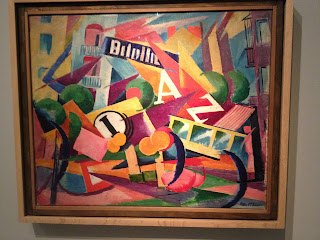 In most cases, I don't remember the artist or the title, but I'm pretty sure this next one was called "Still Life with Cat": 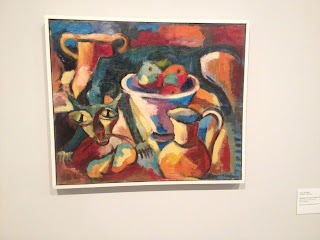 They also had wonderful portrait done by Otto Dix.  I really loved it, but there were so many museum guards, the best chance I had was to take this shot from a distance. 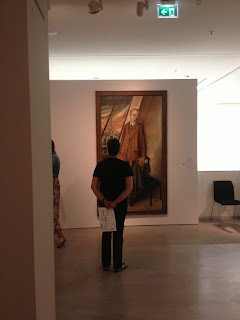 They had two Felix Nussbaum paintings, including a particularly haunting "Self-Portrait with a Shroud," done when he was in hiding in 1942 and two years before he was captured and sent to Auschwitz where he was murdered.  The other painting was done in the '20s and showed the avant-garde unloading their paintings in front of the Prussian Academy of Art, while the faculty marched by ignoring them.  Up on the roof, the impressionist Max Liebermann, who had waged his own war against the academy before becoming its head, is painting his self-portrait. 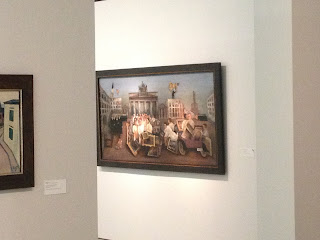 Since the Berlinische Galerie is in Kreutzberg, I decided to head back to Mustafa's to see what their lunch line looked like.  At 30 minutes, it's still too long to ask my students to wait.  For myself, though, I was almost happy to do so. 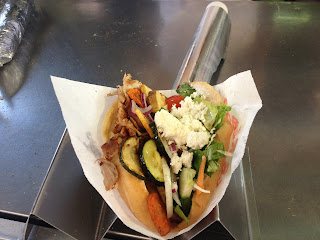 And here's they are the fillings (except for the chicken): 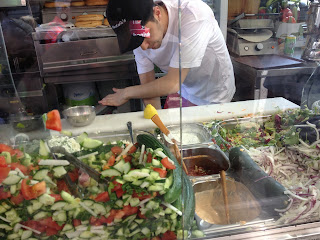 I decided to head up to the Wall monument and then to Mauer Park.  On Bernauer Straße they have recreated part of the wall, including the kill zone.  First, here's how it looked from the west's side: 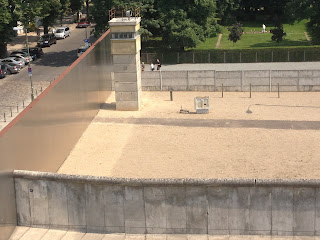 Then here's how it looked from the east's side (remember, the closest one could come in the east was to the inner wall, not the outer one that bordered the west): 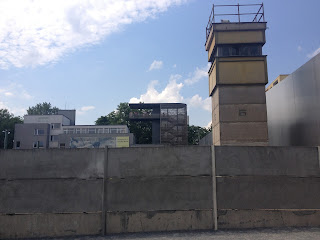 I read that Mauer Park (literally "wall" park) had a nice flea market on Sunday, so I walked over.  It was pretty impressive.  Tons of crap that no one in their right mind would ever buy.  One guy was selling old photo albums (with the pictures still inside), and it just really made me wonder where all this stuff came from.  It's one reason I don't like buying at flea markets in Europe and have almost never done so (though I don't mind wandering through them).  I can't help wonder if some of this was originally stolen from Jews who were later murdered.  Though that's much less likely when dealing with stuff from the 1950s and '60s.

Then I ran across this guy (the one in the vest with the tatoos): 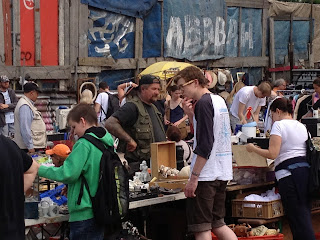 He was talking to a woman in German who was a tourist looking for photos of the Berlin Olympics from 1936.  He had one shot, but she wanted more.  He brought out a two volume set from under the table, and the top one had "Adolph Hitler" written on the spine.  He was saying how he wasn't supposed to sell it here.  At first, I thought it was because the binding was broken (he kept emphasizing that every time he said he wasn't supposed to sell it), but then he explained that the other people at the flea market didn't like Hitler and didn't like him selling stuff like that here.  From what I could see, the book was filled with illustrated photos glued in, or something like that.  In the photo above, the woman (wearing the white t-shirt) is leafing through it.  I didn't dare get any closer when taking this shot, hence the lack of detail.

I could hear music and people cheering, so I left the swap meet and headed in the direction of this crowd: 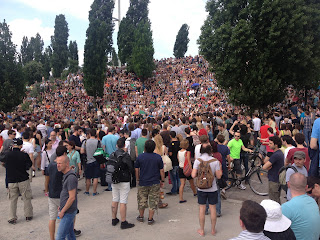 This is called "Bearpit Karaoke" and its held in this park every Sunday afternoon (weather permitting).  You tell the organizer what song you want to sing, and if he approves, you stand before this crowd and sing your heart out.  This guy was belting out Sinatra's "My Way" in German to an enthusiastic crowd: 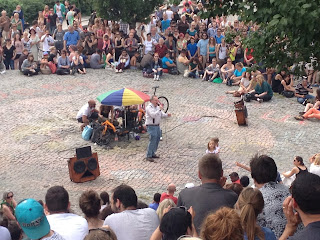 Most people, though, were just lying out on the grass relaxing.

I had some time before my 5:30 reservation to see the Reichstag, so I headed down to the Gendermarkt to visit Fassbender & Rausch, who claim to have the largest chocolaterie in the world.  I had a Eisscholokade, which was basically two scoops of real vanilla ice cream, floating in chocolate milk, with whipped cream and chocolate sauce on top. 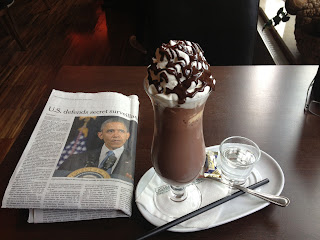 After that, I stopped off at the Komische Oper to pick up a ticket for Der Zauberflöte for Tuesday evening.  Unfortunately, they were almost sold out, so I have an obstructed-view seat off to the side.  At least I should hear the music.

On the way into the Reichstag, there was a group of Israelis behind me.  I've been doing my best to avoid speaking Hebrew or even listening in on conversations, since it interferes with my German.  Last night, I even dreamt that every time I tried to speak German I unknowingly was speaking Hebrew.  In a special exhibit at the Berlinische Galerie, they were showing contemporary art videos and the one showing involved someone speaking in Hebrew.  At first I wasn't sure it was Hebrew because his accent was so strong, but then it became clear it was Hebrew.  At that point I tried to figure out his accent and was going to go with Russian when he said he was Ukrainian.  Anyway, the point is, I've been trying to think only in German, and banish Hebrew, and even so, I still keep using Hebrew words by accident.

The dome and its view are very nice.  It's definitely worth seeing. 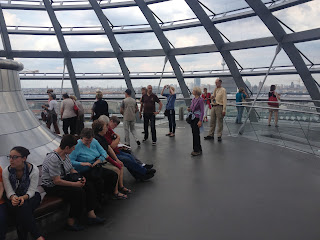 When I left it started to drizzle.  Unlike a week ago, when the rain was cold and I needed several layers, here the weather was still warm and somewhat humid, so I felt comfortable in my shorts and short-sleeved shirt.  I decided to do laundry tomorrow and headed to dinner at an Italian-punk pizzeria called "Due Forni."  It's very popular, and I'm going to try to bring the students here in a week or so. 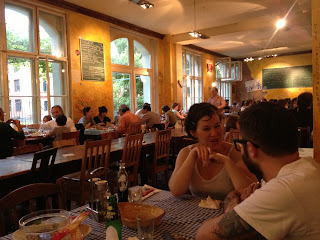 The pizza was very Italian:  thin crust and cooked in  a wood-fired stone oven.  That's it for now.  Tomorrow it's back to the Staatsbibliothek zu Berlin one last time to check out the 1921 newspapers.  And do laundry (there's a laundromat three blocks away).