We reached Vienna this afternoon with little difficulty.  The weather here is ok; it’s still somewhat warm and humid, but not as bad as Prague at its worst.

The pension is in the Neubau neighborhood, which is rather nice and filled with small shops, cafes, and bars.  It’s located only a block and a half from the Neubaugasse U-bahn stop.  The pension is small; it’s family owned and operated.   It has an “old Vienna” feel to it. 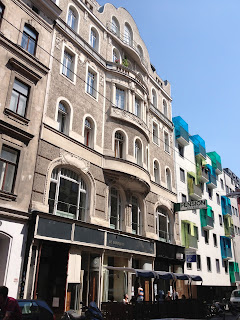 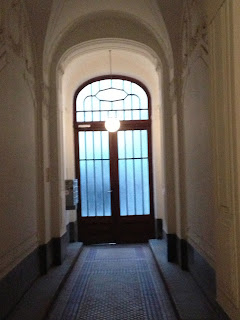 The grandmother who runs it checked us in.  There is Wifi in the pension, but it seems to work intermittently, cutting in and out.  After we checked in and dropped off the luggage, I took the students to the Naschmarkt for a very late lunch (I called it a “linner”). 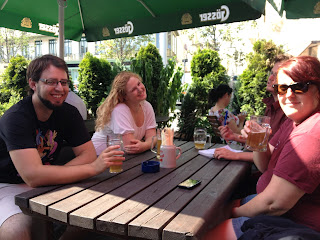 Then the group split in two:  one went shopping while I took the other to the Secession Building. 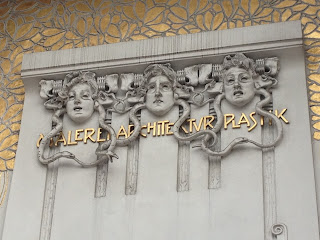 The main exhibition hall, unfortunately was closed as they set up a new installation, but we were able to spend some time with the Beethoven Frieze by Klimt.

Afterwards, we walked through the Naschmarkt. 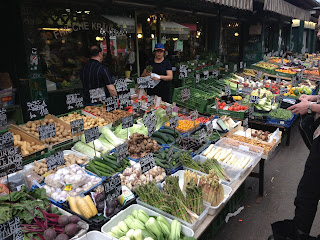 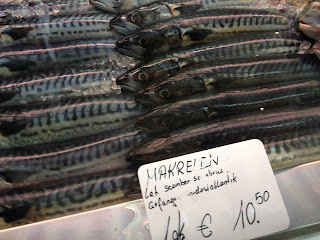 One of the students wanted to take a photo of a cheese display but was a little scared of the guy behind the counter.  I asked him if she could take a photo and he said it was ok.  I started to talking with him and I mentioned Hebrew among my languages.  At that point he said “ma nishma” (“how are you doing?).  As we chatted, he kept stabbing the table top with this cheese-covered big knife.  I asked where he was from and he said “Gaza.  Do you understand?” and he kept stabbing the table top.  I said I understood and quickly backed away.

We met up with the other students and headed down to the inner city to Stephansplatz.  We stopped for drinks at Café Weinwurm, where I had milchkaffee, and the students tried other fruit drinks.  The bells of Stephansdom were pealing when arrived and it started to very lightly drizzle.  It was rather humid.

After we finished our drinks I took them into the church, but they were having mass, so we couldn’t leave the back area to see anything of the interior.  By the time we came out the drizzle had stopped, so we took a leisurely walk through Graben, making our way to Judenplatz. 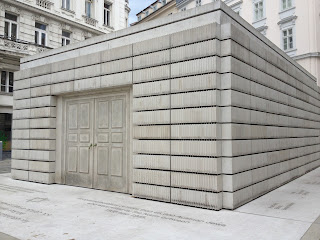 I showed them the memorial to Kristallnacht, and it looked as if someone had either put vegetables or flower stems in the door of the memorial. I can’t tell what they intended.

On our way to the U-Bahn station, we passed some kids playing in blue shirts with white lacing, which I recognized as those used by Zionist youth groups.  Turned out they were with Hashomer Hatzair, and were busy engaging in a protracted water fight.  The only surviving synagogue in Vienna is just around the corner.

After we got back to the pension, I left the students to go to the Westbahnhof and buy our tickets to Mauthausen.  I had no problem buying group tickets and to and from the city for tomorrow, but I can’t buy tickets for Budapest because the tracks are still closed due to recent flooding.  They suggested I try again on Monday and see if it’s possible to book the tickets.  Otherwise, we’ll be taking the bus.

I decided to grab a quick meal in the station and was pleasantly surprised to find that Trzesniewski has opened a branch there.  They make small, finger sandwiches with egg, lox, onions, herring, etc. 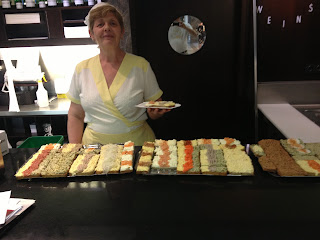 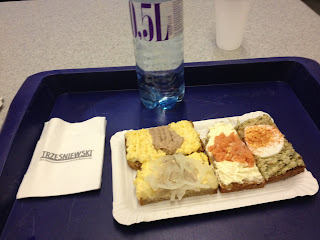 Last time I was in the area of the Westbanhoff was walking to my pension and finding myself totally lost. I saw some guy walking down the street and asked him where bladiebladiestrasse was. I was schelpping a suitcase and a bunch of training materials so I was less than mobile.

A guy crosses the street ahead of us and sidles up to me in a menacing voice "PASSPORT!" Huh? PASSPORT! So I pull out my passport. Then starts asking me how I knew the Good Samaritan direction giver guy. I told him I never had met him. Then comes the clincher...he says in his beat Boris Badanov voice "I am with the Cocaine.". Apparently I had found the local Coke dealer who, it turns out was actually giving me good directions to my hotel.

I could also comment on attending a local Ham (Amateur Radio) club meeting which just happened to be down the street from my hotel. Very nice guys. Turns out three of them were leaving to tour the US NorthEast. They were going to be in New Hampshire so I sent an email to a Ham Radio buddy of mine asking if he could show them around. Literally 24 hours later I get an email from my buddy with these 3 guys standing in his living room. I guess ya gotta be nice to everyone?