The Next Part of the Trip

The first arrived just before 8, so I left the pension early and made my way to Tegel Aiport to meet her flight.  We came back to the pension, had a nice breakfast, and then I checked out and we went to the new location, a hostel in the Mitte neighborhood on Oranienburger Straße.  I decided to help the students remember the location of the hostel, they should remember it as being on Orange Burger Street.  It's not quite right, but if they ever got lost, that would be enough for a German to figure out where they were trying to go.

It was only 10 am and we couldn't check into the hostel before 2pm, so I took the student up to see the whole Berlin Wall installation on Bernauer Straße, which is only one S-bahn stop away.  Then we headed down to the Pariser Platz and the Brandenburger Tor, where they are setting up seats and risers for President Obama's speech on Wednesday. 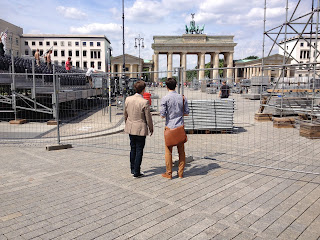 Early forecast:  chance of thunderstorms.  And a certainty of Republican denunciation.

I wanted to try to find the Ritter Sport chocolaterie and we eventually found it near the Gendarmemarkt, but they didn't have lunch food, so we went to a cafe near by.  We both ordered sausage.  Her's was boiled and served with sweet mustard. 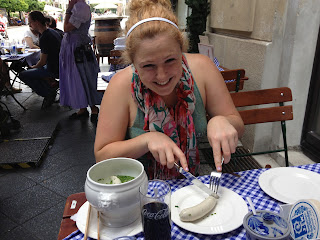 I decided to try the Munich veal sausage, which came with carmelized onions, sauerkraut, potatoes, and spicy mustard.  It was quite good. 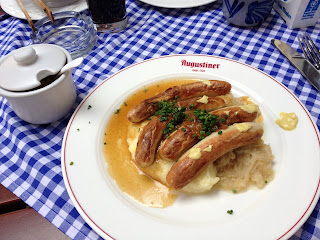 We got back to the hostel a little after 2 pm, but check in took longer than expected (all these different forms).  I needed to leave by 2:40 to pick up the next two students who were arriving, but I wanted to make sure the first got her room.  I barely made the train in time, but the bus transfer was slow.  By the time I got to Tegel, I discovered the flight had landed early. I rushed to the gate, but I had misread the sign and had gone to the wrong one.  I had to walk the way back to the entrance to discover that I had missed the gate by only two and then had to walk all the way around.  Very frustrated.

Thankfully, I ran into the two students near the gate.  One's luggage was lost and they had to go to lost and found.  I went went them and we discovered the missing luggage was in Denver. They are supposed to deliver it tomorrow.  By the time I got them back to the hotel, I barely had time to check into my own room before I went back to Tegel a third time to pick up the last group of students.

Here's my partially unpacked room.  It was really stuffy, but I finally figured out how to open the windows: 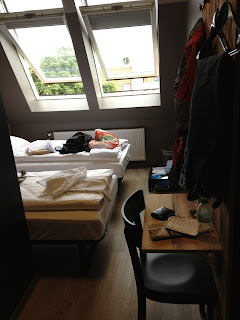 After all that rushing, it turned out that the last plane was delayed a half an hour.  Thankfully, all the students were in one piece, though several were clearly dazed from lack of sleep.  I got them back to the hostel and suggested we meet at 7:15 to go to dinner.

It turned out that most needed money, so I took them to the nearest ATM, and then we went to a traditional German-style cafe near the hostel.  I went with the Swiss-style veal strips with spaetzle.  Very good: 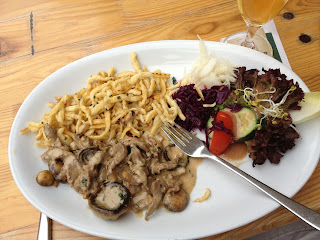 The students seemed to enjoy themselves.  On the way home, we ran into a hen party (they are like stag/bachelor parties, but for women). We had run into them earlier, but now they were walking, blowing whistles, and carrying a 6 foot tall inflatable penis.  Coming from the other direction was a much larger tour group, which also seemed to be blowing whistles and drinking.  They were on a collision course.  I didn't stay to watch.  I can still hear them whistling on the 5th floor.  My room faces west and the back, but they're really trying to make noise. 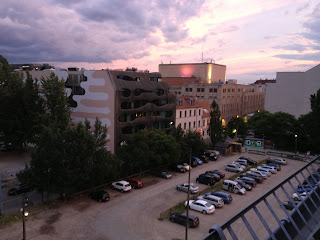 I'm letting them sleep in.  We meet tomorrow for our first day of touring at 9:30 am, after breakfast.  I've strongly suggested good walking shoes.