This morning's breakfast was much quieter.  Also, the students are slowly adjusting to the new time zone; they are waking up at 5 am instead of 4 am.  Their bodies should be up to speed by the time we get to Prague on Wednesday.

My graduate student had an appointment to visit some archives this morning, so we made arrangements to meet in the afternoon.  Meanwhile, the other 7 students and I headed up to Sachsenhausen.  The camp is at the end of the line and then a 20-minute walk, but I saw there was a bus.  When the bus was late, I asked a German standing nearby if this was the stop for the bus to Sachsenhausen.  He said yes, and then added, "it's not so punctual."  I told him I thought Germans were always punctual, and he laughed and said, "maybe in Berlin."

The skies were clear, bright, sunny and hot, so we stuck to the shade as much as possible. 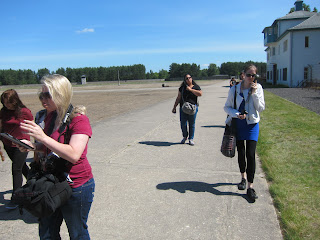 In the past, I usually turn right and head right to the so-called Jewish barracks built in 1938 to house the thousands of Jewish men arrested during the November Pogrom.  The problem is that these barracks are so full of texts that the students never have much time to see anything else.  This time we turned left to go to the sites of execution. 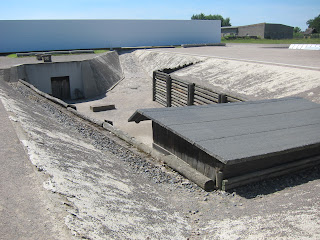 This was the execution trench, where prisoners were either lined up to be shot or were hanged.  There were a variety of gruesome ways of killing prisoners here.  The bodies were then cremated.  These are all that remain of the crematorium. 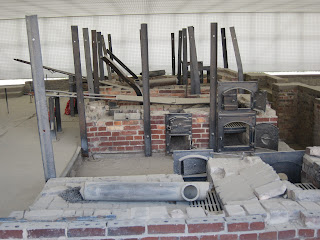 The memorial statue here is from the East German government and looks like it was done by the same artist who did the main camp monument.  The statue is really a secular pietá, a communist version of Christ's descent from the cross. 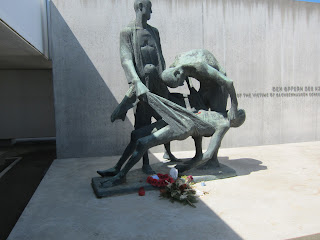 After taking them to the main communist-era camp memorial, we headed at last to the Jewish barracks, but I limited their time there to half an hour. 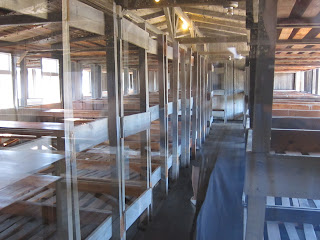 I wanted to catch the 1:10 bus back to Oranienburg (they only run hourly), and so we did manage to get back to the station where we had a quick bite in an Imbiss, a whole-in-the-wall food shop.  I tried the "Polish-style" sausage, curious as to what I would get.  Here it is: 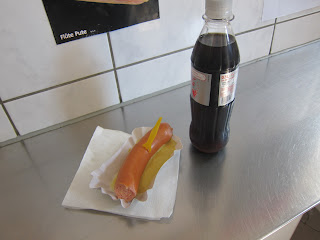 Basically, a large boiled hot dog drowning in a sea of mustard (it helped).

We got back to the hostel around 2:30, and I gave the students about half an hour to get ready if they wanted to go to Cafe Einstein Stammhaus.  My student was back from the archives so I heard about her adventures there.  Finally, we headed out (sans one student who was feeling light headed from the sun and jet lag and wanted to sleep).

No problem finding enough seats for us in the cafe's garden: 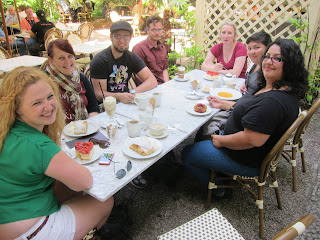 We relaxed in the shade and chatted for a while.  Then one student went off to meet friends near the Brandenburg Gate and the rest of us headed to KaDeWe.  After showing them the cafeteria we hit the food courts.  This is their display on American food items.  It's embarrassing:  we are primarily known around the world for Pop Tarts, Oreos, and cheese in a can: 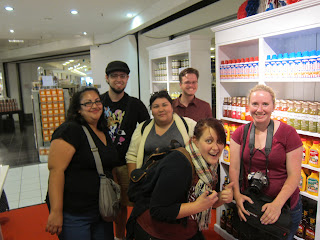 Then it was on to the toy department.  This little, oddly biographied stuffed animal, ran a mere 59 euros. 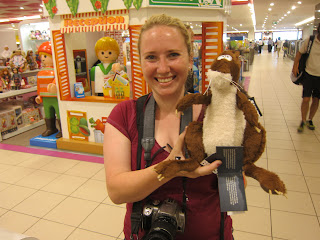 After that we headed over to Mustafa's for some dönör kebap.  There's no place to sit, so some of the students waited on a ledge by a neighboring bank: 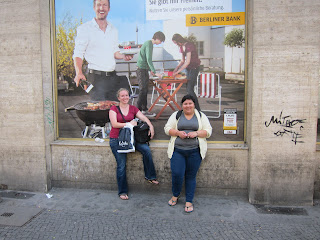 We got back 'round 9 pm and it was clear that we've all had a lot of sun today.  I've had a lot of water to drink and the back of my neck feels red.  Some of them went right to sleep, but several have decided to go out exploring.  I've encouraged the students to venture out on their own, so I'm glad they are trying new things.

I let them look through my guide book for interesting places in the neighborhood, and they settled on "Eschloraque Rümschrümp."  Here's what my guide book says about it:

Bonus marks if you can pronounce the name of this Mitte classic.  More bonus points if you can find it -- it's hidden away in one of the courtyards of hte Hackescher Höfe.  Steel yourself for the eccentric monster-obsessed interior design.

It sounds like it should be a fun place (if they find it).  They plan on being back by midnight and I've told them they need to be ready to leave tomorrow morning at 9 am for Wannsee.  That's all for now.