Finally, I Get Some Research (Started)

I slept for 9 hours last night without chemical assistance (unless you count the beer with dinner) and didn't make it to breakfast until the ungodly late hour (for me) of 9 am.  Luckily, there was still plenty of food left at the buffet. 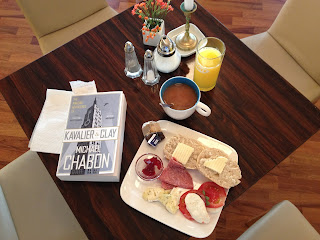 By the time I picked up the rolls and filling for my small sandwiches, it was nearly 11, so I just went straight to the Staatsbibliothek zu Berlin at Unter den Linden, checked my coat and bags, walked up to the pick up desk, and was promptly told that for reasons she didn't understand, my book wasn't there yet.  Perhaps it might be after 4 pm.  When I went back to the coat check and recounted what had happened the coat check woman repeated "perhaps, perhaps" the book might be there after 4 pm.

This east German era little man might be saying go, but the Staatsbibliothek keeps telling me to wait. 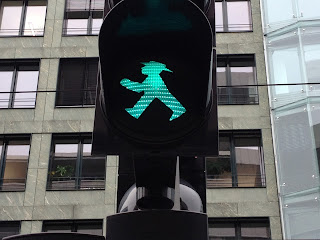 Since I was getting on and off at the Friedrichstraße station, I snapped a few shots of the Holocaust memorial there.  This first side represents the children who left this station to survive on the Kindertransporte. Thy are in a lighter bronze, with full suitcases and tags to match them to their luggage when they arrive in England. 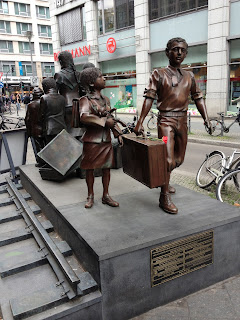 Opposite them are those who were deported to their deaths two and a half years later from this same station.  They are in a much darker bronze, marked with a Jewish star, and their suitcases are almost empty. 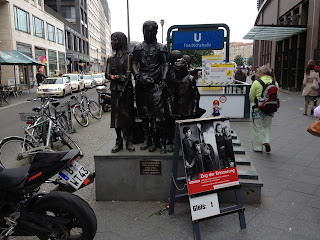 Only a small tattered doll (and someone's trash). 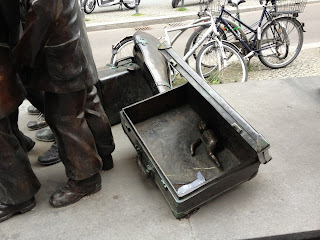 The newspaper collection of the Staatsbibliothek zu Berlin is housed in a former warehouse at the docks of Westhafen.  Really quite different from your average archive. 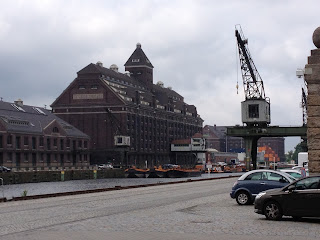 I ate my sandwiches and apple and then went in to do some work.  It wasn't quite as awkward as yesterday, but it still took longer than I would have liked to figure out the procedures at this archive.  Finding and ordering the microfilm wasn't so bad, but it wasn't until I left that I figured out what was going on when it came to making copies.

Basically, in a nutshell, I can pay by the photocopy or buy a USB stick for 10 euros and then make as many scans to it as I like.  I only figured that last part out after I used up the few coins I had making six copies of pages from the Berliner Tageblatt of March 1921.  Luckily, all the main material will be in the June 1921 section, when they covered the murder trial.  But after an hour and a half of going through both the morning and evening editions for the later half of March and all of April from 1921, I was feeling somewhat queasy and very tired.  I forgot how much energy it takes to go through a daily newspaper quickly scanning for articles.  I'll buy the USB stick when I go back on Thursday.

I needed some air and also I wanted to pick up a cell phone, so I headed for a big technology store I know in west Berlin near the Zoo station.  I finally picked out a phone and a starter card, but to activate it they needed my passport number, and I had left my passport in the small safe in my room.  I'll go back tomorrow.

Still needing air, I walked down past KaDeWe towards Nollendorfplatz for some coffee and cake.  Instead of cake I got something called a Apfelzimt Taler, which means an apple-cinnamon dollar cookie.  It was pretty good, and the whole thing came to 3.8 euros or less than a third of what I paid at Cafe Einstein (and with much quicker service, too).  Afterwards, I noticed this on a nearby wall. 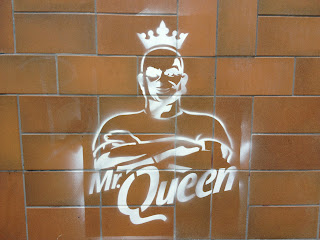 The weather has been improving all day.  Here's the sunny late afternoon cafe scene near my pension. 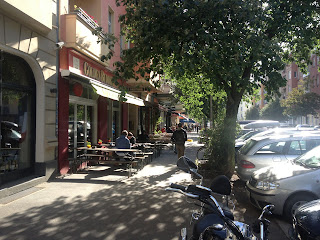 I had thought about going back to the Saturn store to pick up the phone, but decided to get dinner first.  This turned out to be a good idea since I accidentally left my metro pass in the hotel and having been carded twice today, I'm not risking it.

It's asparagus season here in Germany, and almost every cafe has their special Spargel Karte.  I ended up at a little cafe in Prenzlauer Berg called Sowohl Als Auch. 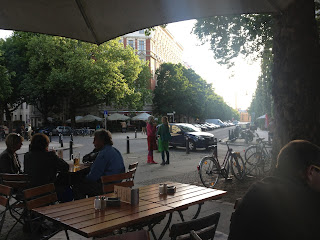 For some reason, I felt I needed to eat more vegetables, so I ordered the carrot-orange soup with roasted sunflower (or pumpkin) seeds, and the Beelitzer (white) asparagus with new potatoes and hollandaise sauce.  And a beer. 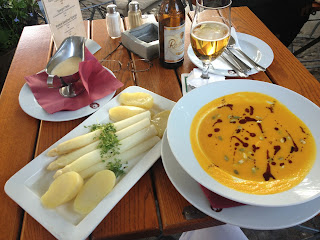 Afterwards, very full, I walked back to the pension.

Tomorrow I'm going to visit the Bruno Balz archive for the first time.  The Staatsbibliotek is opening afternoon tomorrow, so I thought my morning would be best served elsewhere.  If I can get a ticket, I'm going to try to see La Traviata at the Staatsoper.  I'm also going to try to get a vegetable kabob at someplace called Mustafa's in Kreuzberg.